Methionine dependence is due to the overuse of methionine for aberrant transmethylation reactions in cancer. Methionine dependence may be the only general metabolic defect in cancer. In order to exploit methionine dependence for therapy, our laboratory previously cloned L-methionine α-deamino-γ-mercaptomethane lyase [EC 4.4.1.11]). The cloned methioninase, termed recombinant methioninase, or rMETase, has been tested in mouse models of human cancer cell lines. Ewing’s sarcoma is recalcitrant disease even though development of multimodal therapy has improved patients’outcome. Here we report efficacy of rMETase against Ewing’s sarcoma in a patient-derived orthotopic xenograft (PDOX) model. The Ewing’s sarcoma was implanted in the right chest wall of nude mice to establish a PDOX model. Eight Ewing’s sarcoma PDOX mice were randomized into untreated control group (n = 4) and rMETase treatment group (n = 4). rMETase (100 units) was injected intraperitoneally (i.p.) every 24 hours for 14 consecutive days. All mice were sacrificed on day-15, 24 hours after the last rMETase administration. rMETase effectively reduced tumor growth compared to untreated control. The methionine level both of plasma and supernatants derived from sonicated tumors was lower in the rMETase group. Body weight did not significantly differ at any time points between the 2 groups. The present study is the first demonstrating rMETase efficacy in a PDOX model, suggesting potential clinical development, especially in recalcitrant cancers such as Ewing’s sarcoma.

Out of 23 cell lines derived from diverse types of human tumors, 11 did not grow at all in methionine-depleted, homocysteine-containing (MET-HCY+) medium and were absolutely methionine-dependent, whereas 3 grew only slightly in this medium. Many of the cancer cell lines tested have little else in common other than the fact that they are methionine-dependent. The high frequency of occurrence of methionine dependence in diverse types of human cancer cells indicated that methionine dependence could be an important aspect of oncogenic transformation. Normal unestablished cell strains thus far characterized grow well in MET-HCY+ medium [2, 3].

Twenty-one different human tumor cell lines (4 lung, 4 colon, 4 kidney, 4 melanoma, 3 CNS, and 2 prostate) and normal cell strains were treated with recombinant methioninase (rMETase) in vitro. rMETase had a mean IC50 for the cancer cells, which was one order of magnitude lower than that for normal cell strains [4].

Many lines of evidence indicated that the malignant and transformed cells synthesize large amounts of methionine endogenously despite their requirement for elevated exogenous methionine [1].

In a diverse set of human cancer cell lines, all were found to be defective in at least one aspect of methionine metabolism, giving rise to the possibility of a general metabolic defect in cancer [5].

By selecting for methionine independence, it is possible to select for cells, which became less malignant, indicating further a linkage between altered methionine metabolism and oncogenic transformation [7-9].

Our laboratory pioneered the patient-derived orthotopic xenograft (PDOX) nude mouse model with the technique of surgical orthotopic implantation (SOI) [12, 13]. PDOX models were established from patients with colon [14-16], pancreatic [17-28], breast [29], ovarian [30], lung [31] and stomach cancer [32], and mesothelioma [33] in our laboratory, resulting in primary and metastatic tumor growth very similar to that of the patient [32]. Recently, PDOX models of sarcoma have been developed [34-38], as well as for cervical cancer [39-41] and melanoma [42-44] in our laboratory.

Ewing’s sarcoma is a rare and aggressive malignancy. Previously, a tumor from a patient with a Ewing’s sarcoma with cyclin-dependent kinase inhibitor 2A/B (CDKN2A/B) loss and FUS-ERG fusion was implanted in the right chest wall of nude mice to establish a PDOX model. The Ewing’s sarcoma PDOX model was sensitive to the CDK4/6 inhibitor, palbociclib, and the IGF-R inhibitor, linsitinib. The PDOX tumor was resistant to doxorubicin as was the patient [37].

The present report demonstrates the efficacy of rMETase on the PDOX model of Ewing’s sarcoma. 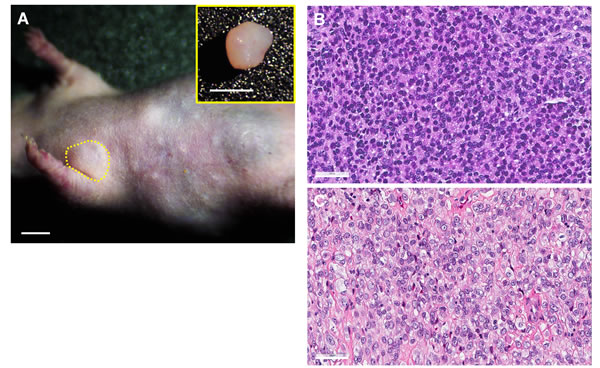 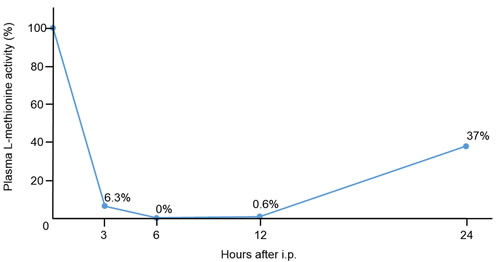 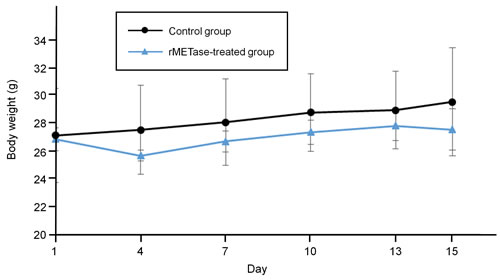 Plasma L-methionine level in the rMETase-treated Ewing’s sarcoma PDOX (15.0 ± 8.8 nmol/ml) trended to be lower than in the untreated control (26.0 ± 8.1 nmol/ml). L-methionine levels were reduced in the rMETase-treated tumors (9.5 ± 11.3 nmol/mg protein) compared to the untreated control tumor (27.5 ± 12.2 nmol/mg protein) (Figure 5). Although changes in methionine levels did not reach statistical significance, they show a definite trend of depletion. It should be noted that the methionine levels were measured 24 hours after the last rMETase administration during which time MET levels could have increased from both endogenous synthesis and mouse chow.

The present study has important implications since it is the first in vivo efficacy study of rMETase on a patient tumor, in this case, a PDOX model of Ewing’s sarcoma, a recalcitrant cancer. The present results and previous results indicating the generality of methionine dependence, and the linkage of methionine dependence to fundamental properties of malignancy, suggest that rMETase is a specific tumor-targeting agent that may be applicable to the treatment of multiple types of cancer [1-10, 45-50]. Further rMETase efficacy studies in PDOX models of various tumor types should serve as a bridge to the clinic.

Previously-developed concepts and strategies of highly selective tumor targeting can take advantage of molecular targeting of tumors, including tissue-selective therapy which focuses on unique differences between normal and tumor tissues [51-57]. 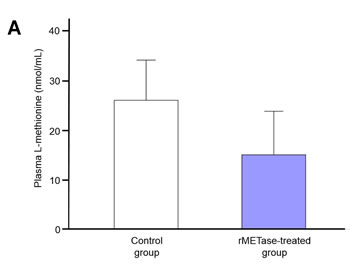 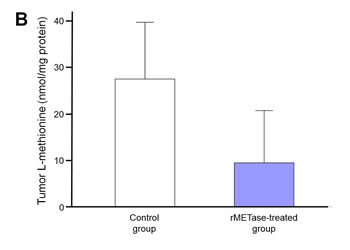 The present study has demonstrated efficacy of rMETase on a Ewing’s sarcoma PDOX model. This is the first experiment in which rMETase was tested on a patient-derived tumor in a mouse model. The results indicate the potential of rMETase in the clinic. However, important questions remain including whether rMETase can shrink tumors as monotherapy or whether combination with chemotherapy would be more effective. Combination of rMETase and cell-cycle-specific drugs could take advantage of the late-S/G2 cell arrest observed in cancer cells after methionine depletion [45-48, 58]. Another question remains what is the long-term fate of cancer cells arrested in late-S/G2 by rMETase such as whether the cells eventually undergo apoptosis or necrosis.

Athymic male nu/nu nude mice (AntiCancer Inc., San Diego, CA), 4-6 weeks old, were used in this study. All animal studies were conducted in accordance with the principals and procedures outlined in the Guide for the Care and Use of Laboratory Animals, 8th edition under Public Health Service Assurance Number A3873-1. Animals were housed with no more than 5 per cage and housed in a barrier facility on a high efficiency particulate arrestance (HEPA)-filtered rack under standard conditions of 12-hour light/dark cycles. The animals were fed an autoclaved laboratory rodent diet.

A female patient was diagnosed with Ewing’s sarcoma in the right chest wall. She underwent surgery in the Department of Surgery, University of California, Los Angeles (UCLA). Written informed consent was obtained from the patient, and the Institutional Review Board (IRB) of UCLA approved this experiment. After mice were anethesized, a 7-mm skin incision was made on the right chest wall. A single tumor fragment (4 mm3) was then implanted orthotopically into the layer between pectoral muscle and intercostal muscle in right chest wall of nude mouse to establish the PDOX model [37].

The pAC-1 rMETase high-expression clone was used for rMETase production. The fermentation procedure for host E.coli cells and the purification protocol for rMETase were the same as previously described: rMETase was purified by 3 different steps using columns of DEAE Sepharose FF and Sephacryl S-200HR, and ActiClean Etox, which is designed for eliminating endotoxin [49].

The PDOX model mice (n = 8) were randomized into an rMETase treatment group (n = 4) and an untreated control group (n = 4) when tumor volume reached 60 mm3. rMETase (100 units) was administered by intraperitoneal injection, every 24 hours for 14 consecutive days. Blood samples were collected at 24 hours after the last rMETase administration at which point the mice were sacrificed. Tumor length, width, and mouse body weight were measured twice a week. Tumor volume was calculated by the following formula: Tumor volume (mm3) = length (mm) × width (mm) × width (mm) × 1/2. Tumor volume ratio was defined as the ratio of volume on each measurement day relative to day 0.

A mouse without tumor was treated with 100 units rMETase by i.p. administration. Fifty μl blood was collected from the retro-orbital plexus with heparinated capillary tubes before treatment and 3, 6, 12, and 24 hours after treatment. Plasma was obtained from the blood by centrifugation at 4,000 rpm for 5 minutes. Plasma L-methionine levels were measured with an HPLC (Hitachi L-6200A Intelligent pump; Hitachi, Ltd., Tokyo, Japan) after derivatization of serum amino acids with the fluoraldehyde reagent OPA as described previously [49, 50]. L-methionine levels are shown as the percentage of the initial plasma L-methionine level.

To standardize tumor L-methionine measurements, tumor protein levels were measured. Briefly, each PDOX tumor was placed in phosphate buffered saline (PBS) (1 ml). Tumors were sonicated on ice for 30 seconds and subsequently centrifuged at 12,000 rpm for 10 minutes. Supernatants were diluted to concentrations ranging from 200 to 1500 μl/ml. Protein assay reagent (Bio-Rad, Hercules, CA) was prepared as a 4-fold dilution and added to each tube with the sonicated tumor supernatents, then absorbance of 595 nm was measured with a U-2000 spectorophotometer (Hitachi, Tokyo, Japan). Protein levels were calculated from the standard curve obtained by protein standard, bovine serum albumin (BSA).

Fresh tumor samples were fixed in 10% formalin and embedded in paraffin before sectioning and staining. Tissue sections (5 μm) were deparaffinized in xylene and rehydrated in an ethanol series. Hematoxylin and eosin (H&E) staining was performed according to a standard protocol. Histological analysis was performed with a BHS system microscope (Olympus Corp., Tokyo, Japan). Images were acquired with INFINITY ANALYZE software (Lumenera Corporation, Ottawa, Canada) [37].