TROP2 is a transmembrane glycoprotein that is overexpressed in various cancers. Emerging evidence suggests that TROP2-targeting therapies are efficacious and safe in patients with multiple prior treatments. TROP2 is a promising target for lung cancer treatment; however, little is known regarding the association of TROP2 expression with clinicopathological/molecular features, including prognosis, in lung cancer. We examined consecutive cases of adenocarcinoma, squamous cell carcinoma (SqCC), and high-grade neuroendocrine tumor (HGNET) for the membranous expression of TROP2 using immunohistochemistry. High TROP2 expression was observed in 64% (172/270) of adenocarcinomas, 75% (150/201) of SqCCs, and 18% (21/115) of HGNETs. Intriguingly, the association of TROP2 expression with mortality was dependent on the lung cancer subtype. High TROP2 expression was associated with higher lung cancer-specific mortality in adenocarcinomas [univariable hazard ratio (HR) = 1.60, 95% confidence interval (CI) = 1.07–2.44, P = 0.022)], but not in SqCCs (univariable HR = 0.79, 95% CI = 0.35–1.94, P = 0.79). In HGNETs, high TROP2 expression was associated with lower lung cancer-specific mortality in both univariable and multivariable analyses (multivariable HR = 0.13, 95% CI = 0.020–0.44, P = 0.0003). Our results suggest a differential role for TROP2 in different lung cancer subtypes.

TROP2 (also known as TACSTD2) is a transmembrane glycoprotein that has high expression in many cancers and is associated with patient survival [1–11]. Emerging evidence suggests that TROP2 is a promising molecular target for the treatment of various malignancies [11]. Several ongoing clinical trials for TROP2-targeting therapies are showing signs of efficacy [11]. TROP2 has been used as a target of antibody-drug conjugate (ADC) therapy [11]. Sacituzumab govitecan (IMMU-132) is an anti-TROP2 ADC [11–18] that contains SN-38, the active metabolite of irinotecan. Without severe side effects, IMMU-132 has been effective against triple-negative breast cancer [19], metastatic small cell lung carcinoma (SCLC) [14], and metastatic non-SCLC (NSCLC) resistant to anti-PD-1/PD-L1 therapy [15].

Lung carcinoma represents a group of histologically and molecularly heterogeneous diseases [20–28]. The major subtypes include adenocarcinoma, squamous cell carcinoma (SqCC), and high-grade neuroendocrine tumor (HGNET), which consists of SCLC and large cell neuroendocrine carcinoma (LCNEC). Even within the same subtype, tumors display heterogeneous characteristics. For example, alterations in cancer driver genes differ between lung adenocarcinomas (e.g., EGFR, KRAS, ALK, RET, and ROS1) [27]. Little is known about the role of TROP2 in lung cancer [1–3, 11, 14, 15]. Because TROP2 is a promising molecular target for the treatment of lung cancer, we examined the association of TROP2 expression with clinicopathological and molecular features as well as with prognosis of various lung cancer subtypes, including 270 consecutive cases of adenocarcinoma, 201 cases of SqCC, and 115 cases of HGNET (74 cases of SCLC and 41 cases of LCNEC).

Table 1: Clinicopathological and molecular characteristics of lung cancer according to TROP2 expression in tumor cells

The percentages indicate the proportion of cases with a specific clinical, pathological, or molecular feature within each category. 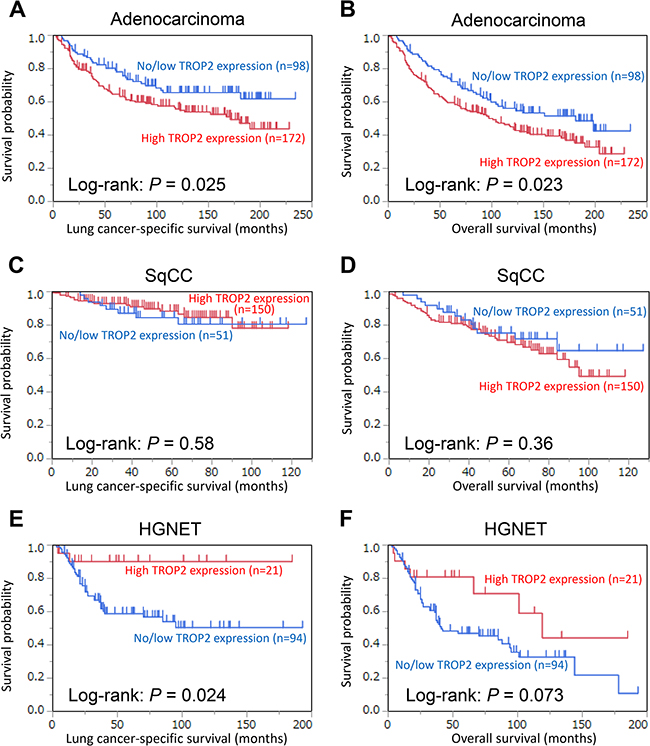 Figure 2: Kaplan–Meier curves for lung cancer-specific (A, C, and E) and overall survival (B, D, and F) according to TROP2 expression levels in tumor cells (no/low vs. high). (A and B) adenocarcinoma, (C and D) squamous cell carcinoma (SqCC), and (E and F) high-grade neuroendocrine tumor (HGNET).

We created missing categories for any missing variables. A backward stepwise elimination with a threshold of P = 0.05 was performed to determine the variables for the final model.

The association of other covariates with patient mortality for adenocarcinoma, SqCC, and HGNET using univariable and multivariable Cox regression analyses is also provided in Supplementary Table 1.

A growing body of evidence suggests that TROP2 is a promising molecular target for the treatment of various malignancies [11]. IMMU-132 is an anti-TROP2 ADC that has been shown to be effective against various cancers without severe side effects in various cancers [11–18], including metastatic SCLC [14] and NSCLC resistant to anti-PD-1/PD-L1 therapy [15]. Because little data are available on TROP2 expression in lung cancer, our data are valuable for establishing the utility of TROP2-targeting therapies.

Our study had limitations that need to be stated. First, there is no standardized method for the immunohistochemical assessment of TROP2 expression in tumors, which may influence the reproducibility of the results. We evaluated membranous TROP2 expression in cancer cells because this assessment is required to predict the efficacy of molecular-targeted therapies for lung cancer. However, some studies evaluated both membranous and cytoplasmic TROP2 expression, which could yield conflicting results as to the association of TROP2 expression with clinicopathological/prognostic features. In our study, two pathologists conducted a blinded and independent assessment of TROP2 expression with a good interobserver agreement. Second, we used tissue microarrays to evaluate TROP2 expression in tumors. Intratumoral heterogeneity is a characteristic of lung cancer; thus, tumors with heterogeneous TROP2 expression can affect the results. We speculate that this potential misclassification of tumors based on TROP2 expression would be randomly dispersed; therefore, null results would have been yielded. Nonetheless, we have shown statistically significant results. In addition, an experienced pulmonary pathologist (KI) chose each core site with a relatively large diameter (2 mm) based on the most histologically representative region of the tumor to minimize the chance of this potential misclassification affecting the results. Third, the difference of follow-up periods among the three subtypes might be a potential confounder of our results. Nonetheless, we monitored survivors for the median (interquartile range) of 13.0 years (9.1–15.5 years) in adenocarcinoma, 5.0 years (3.1–6.3 years) in SqCC, and 5.8 years (3.1–8.2 years) in HGNET. Therefore, less time between surgery and death in SqCC and HGNET did not appear to affect our results substantially. Fourth, the total number of patients, especially those with HGNET (N = 115), was not sufficient, and the statistical power was therefore limited. Fifth, our database was retrospectively created. Finally, we only enrolled Japanese patients at a single cancer hospital. Therefore, additional studies in other patient populations are needed.

We examined 270 consecutive cases of lung adenocarcinoma, 201 cases of SqCC, and 115 cases of HGNET (74 SCLC cases and 41 LCNEC cases) to assess the TROP2 expression in tumors and survival. Lung adenocarcinoma, SqCC, and HGNET were surgically resected between April 1995 and January 2002, between April 2005 and February 2014, and between July 1990 and November 2014, respectively, at The Cancer Institute Hospital, Japanese Foundation for Cancer Research (JFCR) in Tokyo, Japan. Patients were observed until death or December 1, 2015. For the assessment of smoking history, we used a smoking index (SI) calculated by multiplying the “number of cigarettes per day” by “duration in years.” This study was approved by the institutional review board of JFCR, and informed consent was obtained from all patients included in this study.

Pathological diagnoses were made by experienced expert pulmonary pathologists (KI and YI), essentially based on the 2015 WHO classification of lung tumors [37]. Tumor differentiation grades were defined according to the Japanese Lung Cancer Society criteria [38, 39]. All patients were pathologically staged according to the 7th edition of the AJCC-TNM staging system [40].

Immunohistochemistry for TROP2 and Ki-67

Membranous TROP2 expression of tumor cells was evaluated by an immunohistochemical analysis of tissue microarrays. Using the archived surgical specimens used for initial pathological diagnoses of primary lung cancers, we constructed tissue microarrays as previously described [41]. Briefly, we punched points of the donor paraffin blocks using a 2 mm-diameter coring needle and transferred the tissue to the array in the recipient block using a manual tissue arrayer (KIN-1; Azumaya, Tokyo, Japan). For each tumor, an experienced pulmonary pathologist (KI) selected one site exhibiting the most representative histology for that tumor [42].

Sections with a thickness of 4 μm were immunostained for TROP2 with an anti-TROP2 mouse monoclonal antibody (clone: 1E5-1E2, Daiichi Sankyo Co., Ltd., Tokyo, Japan; diluted 1:400) using the Leica Bond III automated system (Leica Biosystems Melbourne Pty Ltd., Australia). This monoclonal antibody recognizes an epitope in the extracellular domain (Mer1-Thr274) of human TROP2. The sections were incubated at pH 6 for 10 min at 100°C. TROP2 expression on the membranes of tumor cells was interpreted by an experienced pulmonary pathologist (KI) in a blinded manner. The intensity of TROP2 membranous staining in tumor cells was defined as 0 (absent), 1 (weak to moderate), or 2 (strong) (Figure 1). We calculated the percentage of tumor cells at each TROP2 intensity level. For the statistical analyses, we categorized the specimens into two groups based on the staining intensity and percentage of positive cells: no/low TROP2 expression (Intensity 1 < 50% and Intensity 2 < 10%) and high TROP2 expression (Intensity 1 ≥ 50% or Intensity 2 ≥ 10%). A random sample set of 127 cases of lung adenocarcinoma, all 201 cases of SqCC, and all 115 cases of HGNET were blindly examined by a second pathologist (YY). There were high concordances between the two observers, as evidenced by a kappa of 0.66 (95% CI = 0.53–0.79; P < 0.0001) for adenocarcinoma, 0.60 (95% CI = 0.47–0.73;P < 0.0001) for SqCC, and 0.63 (95% CI = 0.45–0.81; P < 0.0001) for HGNET. In addition, to assess intratumoral heterogeneity of TROP2 expression, we immunostained TROP2 using whole sections from 20, 15, and 12 cases of adenocarcinoma, SqCC, and HGNET (6 SCLCs and 6 LCNECs), respectively and did not observe substantial intratumoral heterogeneity in any cases in terms of tumor TROP2 expression.

For HGNET, we also conducted immunostaining for Ki-67 (MIB-1, Dako, Glostrup, Denmark; diluted 1:200) using the Leica Bond III automated system (Leica Biosystems Melbourne Pty Ltd.). The tumor Ki-67 index was calculated by an experienced pulmonary pathologist (KI) in a blinded manner. For the statistical analysis, we categorized the specimens into two groups by the Ki-67 index of 60%, which is a median of all HGNET cases (< 60% vs. ≥ 60%). All 115 cases of HGNET were blindly examined by a second pathologist (YY) with a high concordance between the two observers, as evidenced by a kappa of 0.66 (95% CI = 0.53–0.79; P < 0.0001).

Detection of EGFR and KRAS mutations and ALK fusion

Tumor specimens were snap-frozen in liquid nitrogen typically within 20 min after surgical resection and stored at −80°C until use. DNA was extracted using a standard proteinase K digestion and phenol-chloroform extraction. For analysis of the EGFR mutation, we examined four exons (exons 18–21) that code for the tyrosine kinase domain of the EGFR gene. For exons 18 (G719X), 20 (S768I and T790M), and 21 (L858R and L861Q), the TaqManTM SNP Genotyping Assay kit (Applied Biosystems, Foster City, CA, USA) was used according to the manufacturer’s instructions. For exon 19 deletion and exon 20 insertion, a fragment analysis was conducted, as previously described [43]. For the analysis of KRAS mutation, we performed direct sequencing assays for codons 12, 13, and 61, as previously described [43].

For detection of ALK fusion, we performed immunohistochemistry using an anti-ALK mouse monoclonal antibody (clone: 5A4, Leica Biosystems Newcastle Ltd., UK; diluted 1:50) and the Leica Bond III automated system (Leica Biosystems Melbourne Pty Ltd). The sections were incubated at pH 9 for 30 min at 100°C. In the ALK-positive tumors, ALK fusions were confirmed by fluorescence in situ hybridization, as previously described [27].

To investigate the association of TROP2 expression with clinicopathological and molecular features in lung cancer, we used the chi-square or Fisher’s exact test as appropriate.

K.I., Y.Y., T.S., and Y.I. conceptualized the study and contributed to the development of the study design and methodology. K.I., Y.Y., M.K., H.Ni., R.S., S.S., H.Na., K.N., S.O., and Y.I. were responsible for the collection of tumor tissue, and acquisition of clinical and tumor tissue data, including histopathological and immunohistochemical characteristics. K.I. and Y.I. performed data analysis. All authors contributed to the interpretation of the findings. K.I. drafted the initial manuscript. All authors contributed revisions and read and approved the final draft. K.I. and Y.I. are responsible for the overall content as guarantors.

This study was supported financially by Grants-in-Aid for Scientific Research from the Ministry of Education, Culture, Sports, Science and Technology, Japan, including JSPS KAKENHI Grant Numbers JP16K08679 (K.I.), JP26430149 (H.Ni.), and JP15H04714 (Y.I.); the Ministry of Health, Labour and Welfare, Japan; the Ministry of the Environment, Japan; the Smoking Research Foundation; and the research grant from Daiichi Sankyo Co., Ltd.