Purpose: Testicular germ cell tumors (TGCTs) are nearly universally curable malignancies. Nevertheless, standard cisplatin-based chemotherapy is not curative in a small subgroup of patients. Previously, we showed that PD-L1 overexpression is associated with worse prognosis in TGCTs, while tumor infiltrating lymphocytes (TILs) are prognostic in different types of cancer. This study aimed to evaluate the prognostic value of PD-1 and PD-L1 expressing TILs in TGCTs.

Materials and Methods: Surgical specimens from 240 patients with primary TGCTs were included into this translational study. The PD-1 and PD-L1 expression on tumor and TILs were detected by immunohistochemistry using anti-PD-1 and anti-PD-L1 monoclonal antibody. Scoring was performed semiquantitatively by weighted histoscore (HS) method.

Conclusions: The prognostic value of PD-L1 expressing TILs in TGCTs was demonstrated for the first time.

Testicular germ cell tumors (TGCTs) are nearly universally curable malignancies, most commonly found in young men [1]. Cisplatin based chemotherapy is curative for 70-80% of patients with metastatic disease, although 20-30% of them may suffer from relapse [2, 3]. Subsequent salvage chemotherapy may cure only 20-25% of patients with relapsed TGCTs [3–5]. The prognosis of patients who failed to be cured with conventional treatment is dismal. Therefore our interest needs to be directed towards identification of predictive biomarkers and novel treatment strategies [6].

Malignant tumor biology and its’ associations with immune mechanisms have been recently a subject of intensified research. It occurs that immune check-point inhibition including PD-1, PD-L1 and/or CTLA4 is a highly effective modality in several types of malignancies [7–10]. Tumor infiltrating lymphocytes (TILs) are likewise proven to be an important biomarker with strong prognostic and predictive features in different types of tumors [11–13].

Programmed-death-1 receptor (PD-1; CD279) and its ligand (PD-L1; B7-H1; CD274) are promising biomarkers and treatment targets in various types of tumors. PD-1 and PD-L1 deliver inhibitory signals that regulate balance between T-cell activation, tolerance and immune-mediated tissue damage [14]. PD-L1 and PD-L2 are ligands primarily involved in modulating T cell activity in peripheral tissues through interaction with PD-1 receptor [15]. PD-1 is a member of the immunoglobulin superfamily and is expressed on double negative T cells in thymus and on activated CD4+ T cells, CD8+ T cells, natural killer cells, B cells and monocytes [16]. PD-L1 is expressed in different organs, including placenta, heart, lung and liver as well as on activated T cells, B cells, dendritic cells, macrophages, mesenchymal stem cells and subsets of thymocytes. PD-L2 expression was not observed in the lymphohematopoietic cells at all [16–18]. Expression of PD-L1 was also described in various tumor cells [16]. Tumor cells are able to suppress antitumor immunity through PD-L1 signaling in the tumor microenvironment [19]. Prognostic significance of PD-L1 expression in tumor was described in various malignancies, including non-small cell lung cancer [8, 9], malignant melanoma [8, 10], renal cell carcinoma [8, 20], colorectal [21] breast cancer [22] and testicular cancer [23].

The presence of TILs have been proven to have clear correlations with patients’ clinical outcome in several types of tumors, such as metastatic melanoma [24], ovarian [25, 26], colorectal [13] and breast cancer [11, 27]. TILs in breast cancer is a robust predictive and prognostic marker [28] and their existence in breast cancer tissue before chemotherapy seems to be a good prognostic feature promoting a therapeutic effect of neoadjuvant treatment [29, 30].

Patients’ characteristics are summarized in Table 1. Majority of patients had non-seminomatous primary TGCT, and a good prognosis according to IGCCCG. Patients were managed with chemotherapy, radiotherapy or surveillance. Tumor specimens from 240 patients before administration of systemic therapy included 57 pure seminomas and 183 non-seminomas/mixed GCTs. Non-seminomas and mixed GCTs comprised of 140 embryonal carcinomas, 24 seminomas, 26 yolk sac tumors, 13 choriocarcinomas and 36 teratomas (Table 2). 9 cases of seminomas were clinically considered as non-seminomas based on positivity of alpha-fetoprotein.

a compared to seminoma 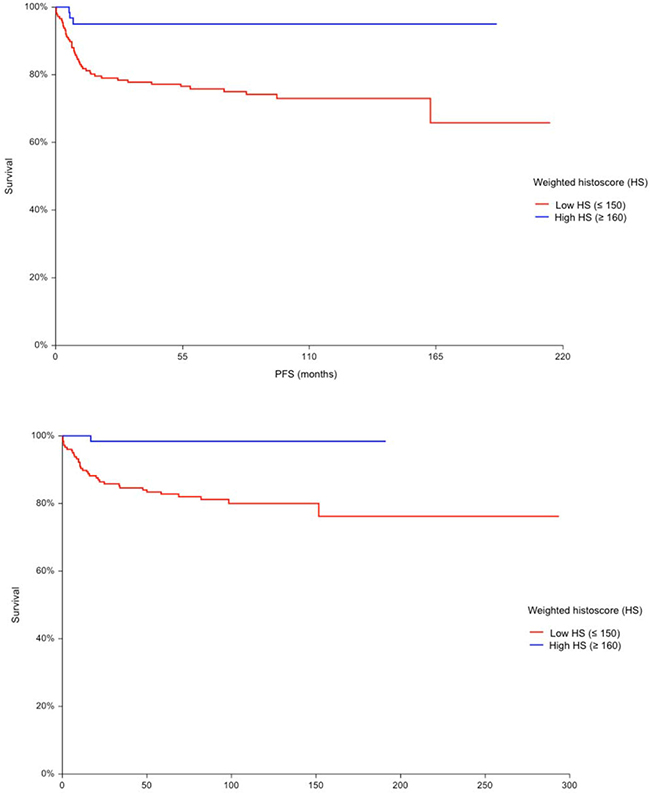 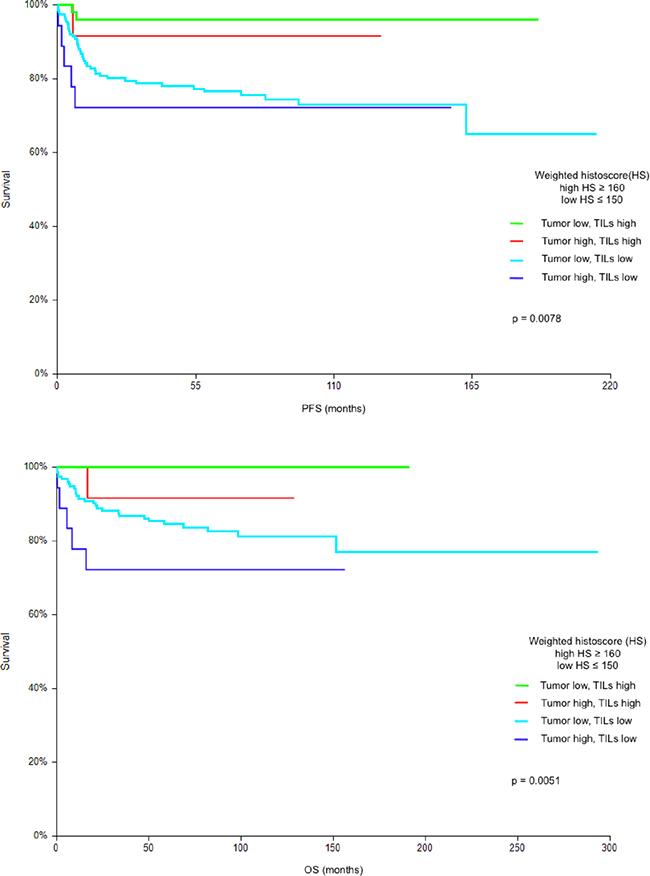 Testicular tissue is an immunologically privileged site with naturally suppressed immune responses mediated by PD-1: PD-L1 negative co-stimulation [32]. The role of PD-L1 in testicular immune privilege and homeostasis of immune responses has been therefore clearly identified [32]. However, cytotoxic T cells in tumor microenvironment are exposed to inhibition, thus providing immune escape for the tumor [8]. The efficacy of check-point inhibition in TGCTs is unknown. A result from 4 heavily pretreated patients treated with anti-PD-1 antibody have been recently published. Two patients with PD-1 negative primary mediastinal yolk sac tumors progressed immediatelly after anti-PD1 treatment. Third patient with PD-1 negative teratoma and yolk sac tumor had a mixed response with tumor marker decline after initial “pseudo progression”. Patient 4 with germinoma of the hypophysis strongly positive for PD-L1 achieved a durable near complete response with pembrolizumab and oral etoposide. PD-L1 expression on germ cell tumors may therefore play a predictive role for treatment with anti-PD1 agent. However, patient also received a concomitant treatment with oral etoposide, which could contribute to treatment efficacy of pembrolizumab [33]. Treatment with pembrolizumab in refractory TGCTs is currently under evaluation in a phase II study (NCT02499952). The association between PD-L1 expressing immune cells and treatment response to a check-point inhibitor have been recently explored in advanced urothelial cancer by Rosenberg et al. [34]. Increased levels of PD-L1 on immune cells were related to increased response to atezolizumab (anti-PD-L1 monoclonal antibody). Moreover, the immune activation gene subsets (CXCL9, CD8A) and other immune check-point genes (PD-L1, CTLA-4, TIGIT) were associated with immune cell PD-L1 expression, thus suggesting immune cell PD-L1 expression represents an adaptive immune regulation. Known data thus imply a PD-L1 inhibition could be a meaningful treatment target in TGCTs.

DAKO antibodies were used for the realization of this study. Previsously published studies have used various types of antibodies for immunohistochemical detection of PD1 and PD-L1 contributing to heterogenous scoring and results [34–36]. Therefore we suggest that staining results should always be interpreted in the context of the antibody used for PD1 and PD-L1 detection.

The study has some limitations, including the retrospective nature of the analysis, the absence of extragonadal germ cell tumors and the relative under-representation of choriocarcinoma and yolk sac tumor. Subpopulations of lymphocytes were not analyzed in this study. Another limiting factor is missing validation group of patients, thus the study should be considered as hypothesis generating.

This retrospective translational study (Protocol IZLO1, Chair: M. Mego) included 240 patients with TGCTs treated from January 1999 to December 2013 in the National Cancer Institute of Slovakia, with available paraffin embedded tumor tissue specimen and sufficient follow-up clinical data. One hundred and thirty six patients (56.7%) in this study were also included in our previous report [23]. Patients with concurrent malignancy other than non-melanoma skin cancer in the previous 5 years were excluded. Data from all patients regarding age, tumor histology, clinical stage, type and number of metastatic sites, and delivery of systemic therapy were recorded and compared with PD1 and PD-L1 expression in tumor and TILs. The Institutional Review Board approved this retrospective study and a waiver of consent form for patients was granted.

Pathology review was conducted at the Department of Pathology, Faculty of Medicine, Comenius University, by two pathologists (ZC and PB) associated with the study.

The study included tumor specimens from 240 patients before administration of systemic therapy. All of these specimens were obtained from primary testicular tumors. The TGCTs were classified according to World Health Organization criteria [37]. PD1 and PD-L1 expression was evaluated in tumor, TILs and in lymphocytes between tubules adjacent to germ-cell neoplasia in situ (GCNIS) (Figure 3). 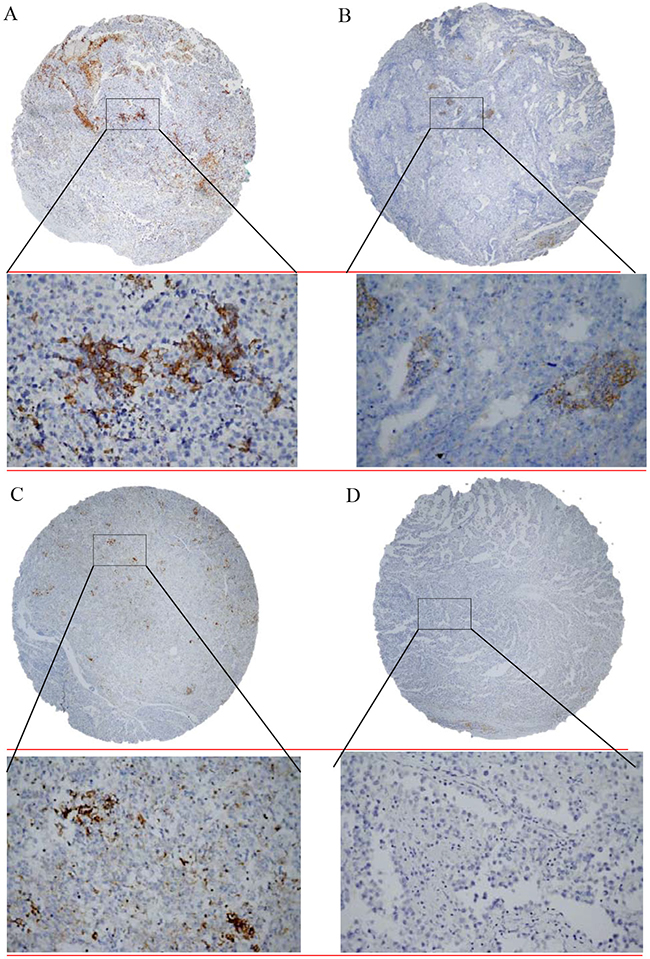 According to tumor histology, one or two representative tumor areas from each histological subtype (e.g. 1-10 from each patient) of TGCTs were identified on H&E sections. Sections were matched to their corresponding paraffin blocks (the donor blocks), and 3-mm diameter cores of tissue were removed from these donor blocks with the multipurpose sampling tool Harris Uni-Core (Sigma-Aldrich, Steinheim, Germany) and inserted into the recipient master block. The recipient block was cut into 5-μm sections which were transferred to coated slides.

Tumor cores were independently assessed by two observers (ZC and PB) who were blinded to clinicopathological data. In cases of disagreement, the result was reached by consensus. TILs were identified in hematoxylin-eosin staining according to typical morphology (Figure 3). TILs with PD-1 and PD-L1 expressions were scored by weighted histoscore (HS) which accounts for both the extent of cell staining and staining intensity [38]. Briefly, the portion of positive cells was estimated on a scale from 0-100%. The average intensity of positively staining cells was given a score from 0 to 3 (0=no staining; 1=weak; 2= intermediate; and 3= strong staining). Weighted histoscore was then calculated by multiplying the percentage score by the intensity score, to yield a minimum value of 0 and a maximum value of 300. Based on the HS, PD-1 and PD-L1 expressions were graded as low (0–150) or high (160–300) as we described previously [39]. If multiple histologic subtypes were present in a sample, we chose the highest number among these subtypes for final PD-L1 expression of a mixed tumor.

Patients’ characteristics were tabulated. A distri-bution of PD-1 and PD-L1 HS in TILs was significantly different from the normal distribution (Shapiro–Wilk test), therefore we used non-parametric tests for analyses. Analyses of differences in distributions of PD-1 and PD-L1 expression in TILs between the two groups of patients were performed using the Mann–Whitney U test, while Fisher’s exact test or the χ2 test when appropriate were used, when PD-1 and PD-L1 expression was categorized as ‘low’ or ‘high’ according to the aforementioned criteria.

Median follow-up period was calculated as a median observation time among all patients and among those still alive at the time of their last follow-up. Progression-free survival (PFS) was calculated from the date of orchiectomy or the date of tumor biopsy to the date of progression or death or the date of last adequate follow-up. Overall survival (OS) was calculated from the date of orchiectomy or date of tumor biopsy to the date of death or last follow-up. PFS and OS were estimated using the Kaplan–Meier product limit method and compared by the log-rank test. A multivariable Cox proportional hazards model for PFS and OS was used to assess differences in outcome on the basis of PD1 and PD-L1 expression in tumor cells and TILs of primary tumor and prognosis according to IGCCCG (International Germ Cell Collaborative Group) [40]. All reported p values were two sided. For all statistical analyses, a p value <0.05 was considered as significant. Statistical analyses were performed using NCSS 2007 software (Hintze J, 2007, Kaysville, Utah, USA).

This work was supported by the Slovak Research and Development Agency under contract No. APVV-0016-11 and APVV-15-0086.