Method: A total of 294 patients with gastric cancer were retrospectively analyzed between January 2009 and December 2009. The association between platelet indices and overall survival were evaluated. The prognostic analysis was carried out with Cox regression model.

Gastric cancer (GC) is the second leading cause of cancer-related mortality worldwide [1]. Although much progress has been made in the diagnosis and treatment of GC in recent years, the rate of diagnosis in early stage is still low and the prognosis of GC remains poor [2, 3]. Therefore, identification of new useful biomarkers for prognosis in patients with GC is of great importance.

Recent studies have demonstrated a significant role of platelets during cancer progression and metastases. Activated platelets promote tumor cell growth, aberrant angiogenesis, and invasion [4]. Elevated platelets are associated with a poor prognosis in various types of cancer, including pancreatic cancer, gastric cancer, colorectal cancer, endometrial cancer, and ovarian cancer [5–9]. However, total platelet count is determined by the balance between the rate of production and consumption of platelets. A normal platelet count could conceal the presence of highly hypercoagulative and pro-inflammatory cancer phenotypes in the presence of efficient compensatory mechanisms [10].

Mean platelet volume (MPV) is an index of activated platelets and is linked to different inflammatory conditions [11]. Platelet distribution width (PDW), another platelet parameter, indicates variation in platelet size and differentially diagnoses thrombocytopenia [12]. Additionally, both MPV and PDW are easily detected with routinely used hemocytometers. Recent studies reported that MPV is a biomarker in early diagnosis for GC and predicts chemotherapy response and prognosis in patients with unresectable gastric cancer [13, 14]. However, PDW has not been studied completely.

The purpose of this study was to investigate the prognostic impact of the preoperative platelet indices on the overall survival in patients with gastric cancer.

Table 1: Baseline characteristics of the patients according to the PDW

The median value of PDW was 17.3% (range, 10.3-23.2). ROC analysis showed that the optimal cutoff value for the PDW was 16.8 for the OS. The specificity and sensitivity were 42.6%, 78.5%, respectively (AUC = 0.590, 95% CI: 0.532-0.647, p = 0.015). According to the cutoff level, patients were divided into two groups. Of the total of 294 patients, 83 patients (28.2%) were detected with PDW of less than or equal to 16.8, while there were 211 patients (71.8%) whose PDW was greater than 16.8. Correlations between the PDW and clinicopathologic parameters are shown in Table 2. There were no significant differences in age (continuous variable), gender, WBC, NLR (categorical variable), PLR (categorical variable), lymphocytes, tumor size, and differentiation between the two groups. However, age (categorical variable), FPG, hemoglobin, neutrophils, platelet count, MPV, NLR (continuous variable), PLR (continuous variable), CEA, T stage, N stage, and TNM stage in two groups show significant differences.

Table 2: Baseline characteristics of the patients according to the PDW 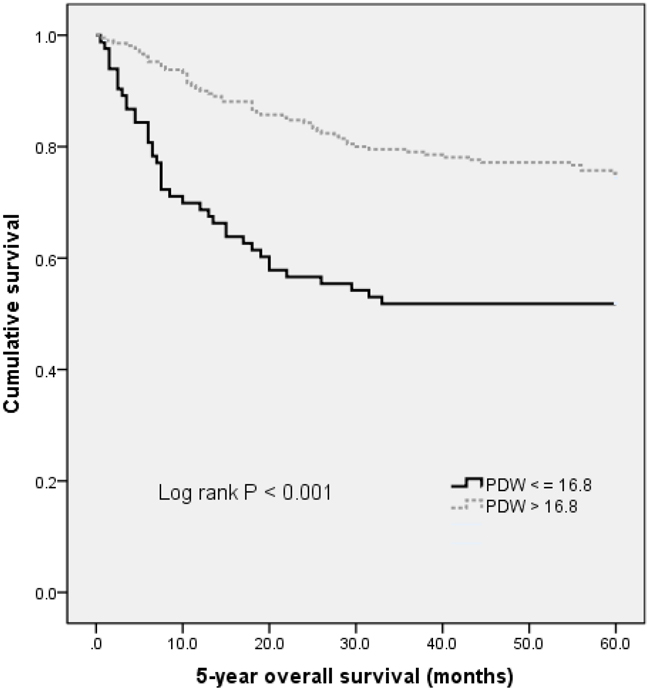 In univariate analysis, age (categorical variable), T stage, N stage, TNM stage, histology differentiation, CEA, WBC, PDW, NLR and PLR were all associated with OS (see Table 3). Other parameters were not found to be in correlation with OS. Next, variables that showed a p value < 0.10 in univariate analysis were included in the multivariate analysis (see Table 4). Age, TNM stage, CEA, histology differentiation and PDW were independent prognostic markers for OS. Notably, PDW before treatment was an independent factor for OS, with HR of 0.493 (95% CI: 0.319-0.761, p = 0.001).

Table 3: Result of the univariate analysis of overall survival in patients with gastric cancer

Table 4: Result of the multivariate analysis of overall survival in patients with gastric cancer

This study showed that PDW is correlated with patient’s survival and that PDW is an independent risk factor for prognosis.

However, the specific mechanism by which PDW affect cancer progression is unclear. Bone marrow cells (including megakaryocytes) malfunction may be related to the decreased PDW. PDW is a measure of platelet heterogeneity caused by heterogeneous demarcation of megakarocytes [17]. Megakaryocytic maturation, platelet production and platelet size could be regulated by cytokines, such as interleukin-6 (IL-6), granulocytes colony stimulating factor (G-CSF) and macrophage colony stimulating factor (M-CSF) [18]. IL-6 promotes tumor angiogenesis, metastasis and metabolism [19]. Moreover, the cytokines G-CSF and M-CSF that be secreted by tumor cells could stimulate megakaryopoiesis and subsequent thrombopoiesis in cancer [20]. However, the clinical value of PDW has not been reported in gastric cancer. Another possible mechanism is that platelets promote the hypercoagulable state in cancer. Activated platelets create a procoagulant micro-environment that enables the tumor cells to cover themselves with platelets and evade the host immune system. High platelet-derived growth factor (PDGF)-D expression is strongly associated with tumor recurrence, distant metastasis and poor outcomes in gastric cancer [21]. Furthermore, PDGF-B is involved in the maintenance of microvessels in gastric cancer [22]. In addition, PDGF-A contributes to the development of pulmonary tumor thrombotic microangiopathy [23]. Those findings are consistent with the idea that activated platelets are involved the pathogenesis of gastric cancer.

Our study has a number of limitations that deserve mention. First, this was a single-center retrospective study and multicentric prospective studies are needed to reduce selection bias. Second, underlying mechanism is needed to support the potential application of PDW in gastric cancer. Third, the participants were composed of Chinese. Our results cannot thus be extrapolated to other ethnic groups.

In conclusion, PDW is easily available with routine blood counts. Our data revealed that reduced PDW is unfavorable prognostic factor in gastric cancer. Further studies are warranted to clarify the exact role of PDW in gastric cancer.

The date of surgery was regarded as the starting point of the survival follow-up until December 31, 2014. Overall survival (OS) was defined as the period from surgery to death or the last follow-up. The median follow-up duration was 60 months.

Written informed consents were obtained from all patients. This study was approved by the Institutional Review Board of the 3rd Affiliated Hospital of Harbin Medical University.

All the subjects underwent physical examination. Body mass index (BMI) was calculated as the ratio of weight (kg) to height squared (m2). Clinical data including smoking status, medical history and medication use were recorded for each subject. Venous blood samples after an 10-hour overnight fasting were collected from the individuals within 1 week prior to surgery. White blood cell (WBC), haemoglobin, and platelet indices were measured by an autoanalyzer (Sysmex XE-2100, Kobe, Japan). The whole blood samples were collected in EDTA-containing tubes, and all samples were processed within 30 minutes after blood collection. The inter- and intra-assays coefficients of variation (CVs) of all these assays were below 5%.

The descriptive statistics are presented as means ± SD or medians (interquartile range) for continuous variables and percentages of the number for categorical variables. When baseline characteristics between two groups were compared, normally distributed continuous variables were compared with the Student t test and skewed-distributed with the Mann-Whitney U test. When baseline characteristics among three groups were compared, normally distributed continuous variables were compared with the one-way ANOVA and skewed-distributed with Kruskal-Wallis H test. The Chi-square test was used for categorical variables. The Kaplan-Meier method and the log-rank test were used for the comparison of survival rates. Variables that showed a p value < 0.1 in univariate analysis were included in a multivariate Cox proportional hazards regression model using a backward elimination strategy. Receiver-operating characteristics (ROC) curve analysis was performed to identify cut-off value of PDW. A two-tailed p value less than 0.05 was considered significant in all tests. All statistical analyses were performed using SPSS Statistics version 22.0 (SPSS Inc., Chicago, IL, USA).