Bone morphogenetic protein-7 (BMP7) is known to antagonize transforming growth factor β 1 (TGFβ1)-mediated fibrosis through suppressing epithelial-mesenchymal transition (EMT). We recently reported that BMP7 also antagonizes the effects of TGFβ1 in breast cancer (BC) tumorigenesis-related EMT. Nevertheless, the control of BMP7 expression in BC remains ill-defined. Here, we detected significantly lower levels of BMP7 and significantly higher levels of microRNA-137 (miR-137) in the BC specimens, relative to paired adjacent non-tumor breast tissue. BMP7 and miR-137 levels were correlated inversely. Additionally, the high miR-137 levels in BC specimens were correlated with reduced patient survival. In vitro, overexpression of miR-137 significantly increased cell EMT and invasion, while depletion of miR-137 significantly decreased cell EMT and invasion in BC cells. The increases in BC cell invasiveness by miR-137 appeared to result from its suppression of BMP7, through direct binding of miR-137 to the 3'-UTR of BMP7 mRNA, thereby blocking its protein translation in BC cells. This study sheds light on miR-137 as a crucial factor that enhances BC cell EMT and invasiveness, and points to miR-137 as a promising innovative therapeutic target for BC treatment.

Breast cancer (BC) is a common malignant tumor in women worldwide [1]. The transforming growth factor β (TGFβ) superfamily receptor signaling pathway plays a key role in the tumorigenesis of BC [2–5], in which action of TGFβ receptor signaling by its ligand TGFβ1 promotes a biological process called Epithelial-Mesenchymal Transition, which cancer cells use to favor an invasive and metastatic phenotype (EMT) [6–9]. In this process, cancer cells begin to secrete proteinases in order to traverse collagenous extracellular matrix proteins. Bone morphogenetic protein-7 (BMP7) is a well-described matrix proteinase that breaks down collagen type IV, a constituent of the basement membrane. Down-regulation of BMP7 facilitates the metastatic spread of BC cells [10–15]. TGFβ1 and BMP7 are two central members in the TGFβ superfamily that each have different effects on EMT regulation. We recently reported that BMP7 does not modify TGFβ1-stimulated phosphorylation of the TGFβ receptor, but significantly inhibited activation of EMT-related genes by TGFβ1 in BC cells, thereby reducing TGFβ1-mediated cell growth and metastasis [16]. However, the regulation of BMP7 in BC remains unclear.

MicroRNAs (miRNAs) are non-coding small RNAs that regulate gene expression at a post-transcriptional level, through specific binding to the 3′-untranslated region (3′-UTR) of target mRNA [17–19]. Specifically, miRNAs have been shown to play an important role in the tumorigenesis of BC [20–28], and in the control of BMP7 activation [29–32]. However, previous studies on miR-137 never addressed BMP7 as a potential target [33–37].

Here, we studied the expression of BMP7 and miR-137 in BC tissues, and investigated the association of miR-137 levels with patient prognosis. We used bioinformatics analyses to elucidate the interaction between miR-137 and BMP7. We then overexpressed miR-137 or inhibited miR-137 in 2 established BC cell lines in vitro, and examined their effects on BMP7 activation and BC cell invasion.

Association of high BC miR-137 levels with poor patient prognosis

The levels of BMP7 and miR-137 in 40 pairs of resected BC tissues (Stage IV) and adjacent non-tumor breast tissues (NT) were measured by Western blot and RT-qPCR, respectively (Table 1). BC specimens contained significantly lower levels of BMP7 (Figure 1A), and significantly higher levels of miR-137 (Figure 1B). We then performed a correlation test using these 40 BC specimens, and detected a strong inverse correlation between BMP7 and miR-137 (Figure 1C, ɤ=-0.72, p<0.0001, N=40), indicating a possible regulatory relationship between miR-137 and BMP7 in BC. These patients were followed up for 60 months to assess overall survival. The relationship of miR-137 or BMP7 levels and clinicopathological characteristics was evaluated using multivariate Cox regression analysis, showing that both were significantly associated with survival of the BC patients (Table 2). Next, the median value for miR-137 in these patients was used as the cutoff point for separating miR-137-high cases (n=20) from miR-137-low cases (n=20). Kaplan-Meier curves showed that patients with high miR-137 levels in BC tissue had a significantly lower 5-year survival than those with low miR-137 levels in BC tissue (Figure 1D). These data suggest that high miR-137 levels in BC specimens may be associated with reduced patient survival.

Table 2: Analysis of the prognostic values of miR-137 and BMP7 in BC patients by Cox regression model 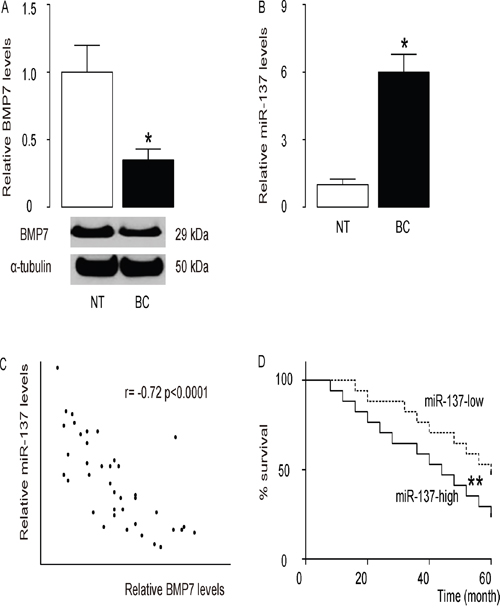 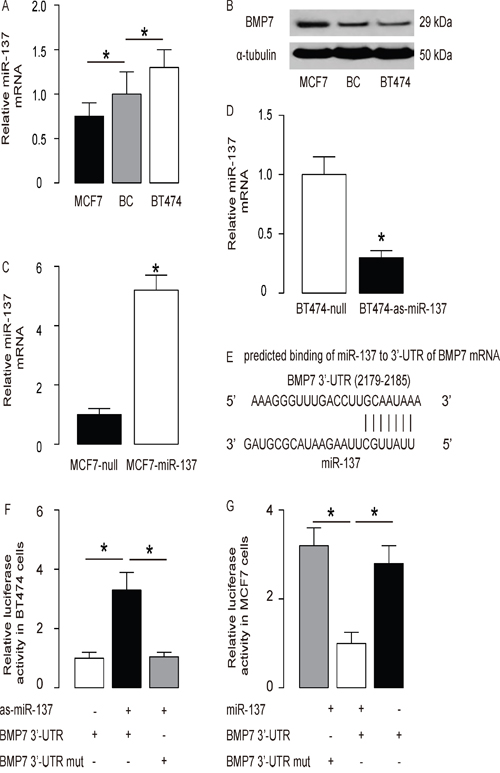 MiR-137 decreases BMP7 protein but not mRNA in BC cells 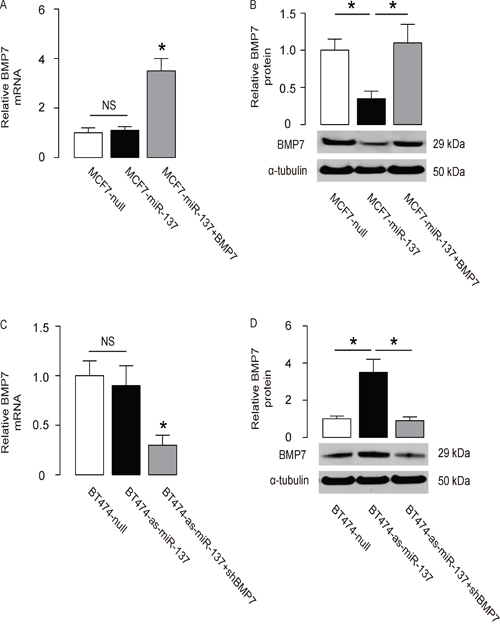 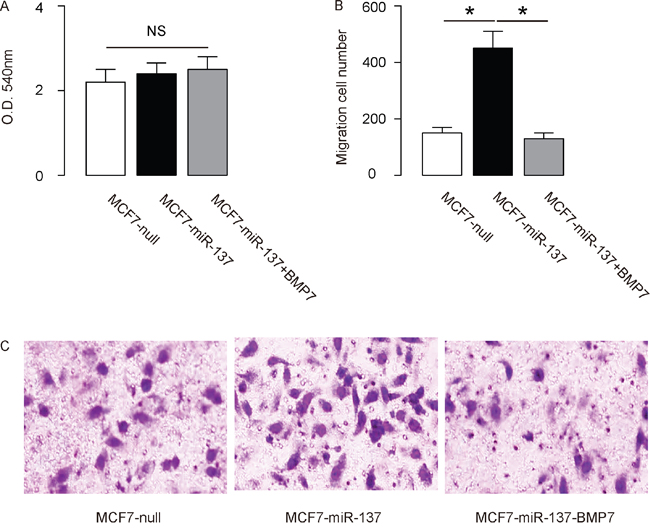 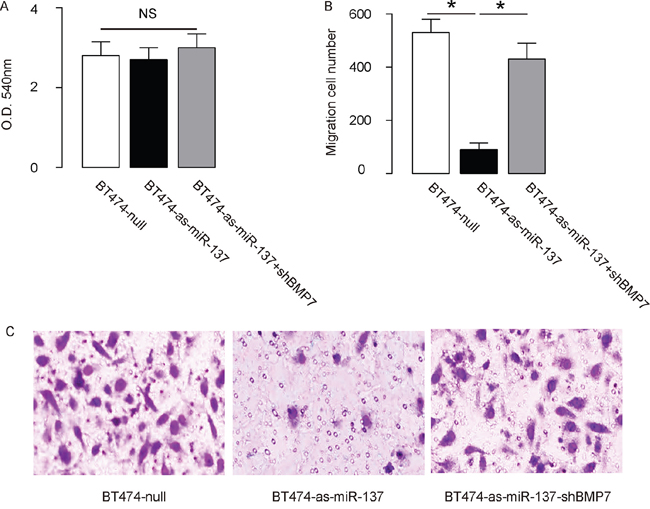 In order to ascertain whether miR-137 promotes BC cell invasion through suppressing BMP7, we prepared plasmids for BMP7 overexpression (BMP7) and depletion (shBMP7). First, MCF7-miR-137 cells were further transfected with BMP7, which increased BMP7 mRNA (Figure 3A) and protein (Figure 3B) in these cells. Overexpression of BMP7 abrogated the promoting effects of miR-137 on the EMT and cell invasion in MCF7 cells (Figure 4B-4C), without affected cell growth (Figure 4A). Next, BT474-as-miR-137 was further transfected with shBMP7, resulting in decreases in BMP7 mRNA (Figure 3C) and protein (Figure 3D) in these cells. We found that the effects of as-miR-137 on BMP7 protein compromised the effects of shBMP7 on BMP7 protein, which explained the findings in BC cells transfected with both as-miR-137 and shBMP7. We found that BMP7 suppression abolished the inhibitory effects of as-miR-137 on EMT and cell invasion in BT474 cells (Figure 5B-5C), without affected cell growth (Figure 5A). Thus, miR-137 may enhance BC cell invasion by suppressing BMP7 (Figure 6). 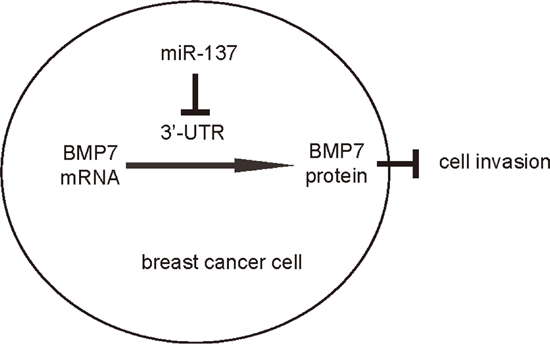 Figure 6: Schematic of the model. MiR-137 enhances BC cell EMT and invasion, through translational suppression of BMP7.

The inhibitory role of BMP7 in BC EMT and invasion has been well documented in the past studies. However, the regulation of BMP7 by miRNAs was only recently reported in lung cancer [42]. Yang et al. reported that miR-137 was significantly down-regulated in NSCLC tissues and cell lines. An In vitro functional assay demonstrated that over-expression of miR-137 inhibited lung cancer cell proliferation, migration and invasion, suggesting that miR-137 could act as a tumor suppressor in lung cancer progression. In addition, they identified BMP7 as a target of miR-137 in lung cancer cells, and used a luciferase reporter assay to show that miR-137 directly targeted 3'-UTR of BMP7. Furthermore, they showed that re-expression of BMP7 substantially reversed the tumor suppressive effects of miR-137 on lung cancer cell proliferation, migration, and invasion [42]. This study is interesting but also suggests that the role of a molecular could be very different from cancer to cancer, since BMP7 is believed to be a tumor suppressor in many cancers [43–46].

Here, we used bioinformatics analyses to screen all miRNAs that target BMP7, and we focused on the expression levels of those which were altered in BC specimens compared to normal tissue control. We found miR-137 to be one such microRNA. To the best of our knowledge, this follow-up study of our previous work [16] is the first study showing that BMP7 protein levels could be regulated by a miRNA in BC. High level of miR-137 in BC tissues was associated with poor prognosis in BC patients. We thus designed in vitro experiments to show a regulatory relationship between miR-137 and BMP7 in BC cells, which was consistence with the clinic findings showing an inverse correlation of these two factors in BC specimens.

In addition to regulation of BMP7 by miRNAs, BMP7 protein levels are modulated at the level of degradation, such as through protein ubiquitination. Moreover, miR-137 may have targets other than BMP7, and these targets should be analyzed to have an overview of the effects of miR-137 in the carcinogenesis of BC. Besides, future studies may also address the regulation of miR-137 in BC and confirm this model in vivo.

To summarize, the current study may provide evidence for using miR-137 as a specific target for future BC therapies.

Surgical BC resected specimens were obtained from 40 BC patients (all Stage III or IV) and paired adjacent non-tumor breast tissues (NT) in Shanghai Jiao Tong University Affiliated Sixth People's Hospital from 2008 to 2010 (Table 1). All patients were followed-up for 60 months, before which they obtained Informed consent and provided signed agreement about this study. The histology of the resected tissue were examined and determined independently by 2 senior pathologists.

Culturing and transfection of BC cells

Human BC cell lines MCF7 [38] and BT474 [39] were originated from adenocarcinoma and ductal carcinoma, respectively. Both lines were purchased from ATCC (American Type Culture Collection, Manassas, VA, USA), and cultured in in RPMI1640 medium (Invitrogen, Carlsbad, CA, USA) supplemented with 15% fetal bovine serum (FBS; Sigma-Aldrich, St Louis, MO, USA) in a humidified chamber with 5% CO2 at 37 °C. All constructs were purchased from Origene (Beijing, China). Transfection was performed with 50nmol/l plasmids, using Lipofectamine 2000 (Invitrogen). The transfection efficiency (>95%) was determined based on expression of GFP in the transfected cells.

Transwell cell invasion assay was performed as has been described previously [16].

MiRNAs targets were predicted using the algorithms from TargetScan [40]. The data were analyzed as previously described [41]. The candidate miRNAs were analyzed for context+ score (Supplementary Table 1). The BMP7 3'-UTR reporter plasmid (pRL-BMP7) and the BMP7 3'-UTR reporter plasmid with a mutant at miR-137 binding site (pRL-BMP7-mut) were both purchased from Creative Biogene (Shirley, NY, USA). Dual-luciferase reporter assay (Promega, Fitchburg, WI, USA) was performed according to the instructions from manufacturer.

Quantitative RT-PCR (RT-qPCR) was performed as has been described previously [16].

The study was conceived and designed by YX. Acquisition and analysis of data was performed by YX, YS and PH. YX and PH interpreted the data. YX drafted the article, and all authors revised the article and approved the final version to be published.