Prognostic value of EGFR and KRAS in circulating tumor DNA in patients with advanced non-small cell lung cancer: a systematic review and meta-analysis

A total of 2,295 potential studies were identified. After screening by title and abstract, 2,216 studies were excluded. The main reasons for exclusion were duplicative studies, reviews, not human studies, not relevant to ctDNA, incorrect tumor type and epigenetic alterations. Of the remaining 79 studies, the full text was screened and 66 studies were excluded for lack of follow-up, no information about prognosis, not restricted to advanced NSCLC patients, non-English literature, not restricted to KRAS or EGFR (exon19 and exon21) mutations. Finally, 13 studies met the inclusion criteria and were included for systematic review and meta-analysis (Figure 1). 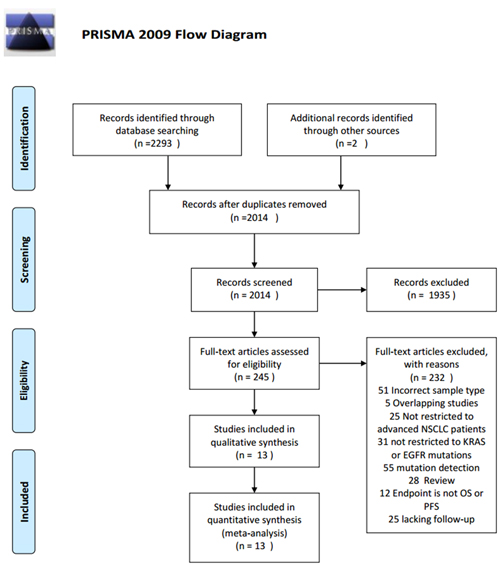 Thirteen studies containing 1,452 patients were published between 2005 and 2013. These studies analyzed the relationship between circulating EGFR and KRAS mutations status and survival outcomes. The mean number of patients for each study was 67, ranging from 22 to 308. Four studies were retrospective and 9 were prospective. All studies were published in full and all had enough information to obtain the hazard ratios (HRs) and associated 95% confidence intervals (CIs). The main characteristics of the included publications are summarized in Table 1.

Relationship between EGFR mutations (exon 19 and exon 21) and PFS

Eight studies assessing the relationship between EGFR mutation status in ctDNA and PFS were eligible for the meta-analysis [15-22]. A total of 705 patients were included, and 248 were EGFR mutation-positive. Among them, 684 patients (97%) were treated by TKIs, and the rest 21 (3%) were treated by chemotherapy. The overall summary HR was 0.64 (95% CI 0.51-0.81), with a low degree of heterogeneity (p = 0.86, I2 = 0%).The pooled analysis indicated a better PFS for circulating EGFR mutation-positive patients (Figure 3A).

Sensitivity analysis by “leave-one-out” strategy showed that there was no “dominant” study driving the results of meta-analysis (Figure 3B).

Seven studies examined the relationship between EGFR mutations status and PFS among advanced NSCLC patients with TKIs therapy [15-19, 21, 22]. The overall summary HR was 0.64 (95% CI 0.51-0.81, I2 = 0%), suggesting that the observed benefit is tightly linked to the effect of EGFR-TKIs in the setting of EGFR mutated patients (Figure 3C).

We performed subgroup analyses on the basis of detection matrix (serum vs. plasma) and study year (prior to 2010 vs. after 2010). There was no statistical significance between these subgroups (Table 2).

Table 2: Subgroup analyses on the basis of detection matrix and study year for EGFR mutations and progression-free survival analysis.

The “leave-one-out” strategy demonstrated that there was no dominant study driving the results of meta-analysis (Figure 4B).

Subgroup analyses on the basis of detection matrix (serum vs. plasma) and study year (prior to 2010 vs. after 2010) were performed. There was no statistical significance between these subgroups (Table 3).

Table 3: Subgroup analyses on the basis of detection matrix and study year for EGFR mutation and overall survival analysis.

Relationship between KRAS mutations in ctDNA and PFS

We performed subgroup analysis based on detection sample (serum vs. plasma). There was no statistical significance between these subgroups (Figure 5C).

Relationship between KRAS mutations in ctDNA and OS

Five studies assessed the relationship between KRAS mutation status and OS among advanced NSCLC patients [3, 6, 24-26]. A total of 693 patients were included and 106 were KRAS mutation-positive. Findings from the meta-analysis suggested that KRAS mutations in ctDNA were associated with an unfavorable OS (HR = 2.07, 95% CI 1.54-2.78, I2 = 34%) (Figure 6A).

The “leave-one-out” sensitivity analysis showed that our results were stable (Supplementary Figure S4).

EGFR genotyping has become a routine test for the selection of patients as candidates for TKIs therapy. KRAS mutations test may help to predict less benefit of treatment with EGFR-TKIs and chemotherapy.

EGFR and KRAS mutation tests are often carried out from formalin-fixed paraffin embedded (FFPE) tumor tissue samples. However, molecular testing with FFPE has some limits. DNA extracted from FFPE is fragmented and also contains DNA lesions (including uracil and thymine deriving from cytosine deamination) that may lead to sequence artifacts [27]. Frozen tumor biopsies and fresh biopsies may complement FFPE. However, sometimes this is not feasible in clinical practice for advanced NSCLC, especially for successive dynamic monitoring. Tumor heterogeneity is another hurdle when utilizing tissue samples for mutation tests [28]. CtDNA may overcome these limits, and may be used as a surrogate [29]. However, we still have a limited understanding of the origination of ctDNA. If the ctDNA analyzed originates from apoptotic/necrotic tumor cells, it may have limited applicability for prognostic analysis. If the ctDNA utilized is from actively shedding tumor cells (either in circulation or in primary/metastatic sites), it may provide valuable information for treatment decision and prognostic prediction. Due to tumor heterogeneity, the choice of target treatment should ideally be based on the ctDNA from metastatic sites instead of on that from the primary sites [30]. Therefore, the limited understanding of its origination arises the question whether EGFR or KRAS mutations detected in ctDNA could be used as biomarkers for prognosis prediction.

Our meta-analysis showed that at least in patients treated by chemotherapy, circulating KRAS mutations correlated with worse PFS and OS. This finding was consistent with the meta-analysis conducted by Chen et al, who evaluated the prognostic value of tissue KRAS mutation status [4].

Either serum or plasma was used as detecting matrix for genotyping in the eligible studies. The amounts of cell-free DNA are much higher in serum due to cell lysis during sample processing, hence reducing the fraction of tumor DNA in serum. However, this discrepancy did not alter our conclusions.

This meta-analysis had some advantages. First, we performed a comprehensive review and reported the most up-to-date published data. Second, no heterogeneity was found in this meta-analysis. Finally, this was the first meta-analysis to assess the prognostic value of circulating KRAS mutations in advanced NSCLC patients.

Despite our efforts to provide an accurate and comprehensive analysis, the limitations of our meta-analysis should be highlighted. First, EGFR exon 19 and exon 21 respond differently to TKIs treatment [9]; thus, it is necessary to perform subgroup analysis according to EGFR mutation subtypes in a future study. Second, we did not perform subgroup analyses based on age, sex, smoking status, and detection methods due to insufficient data. Another limitation of our meta-analysis is that the status of other actionable mutations such as ALK rearrangements were not considered and should be included in an analysis with more available data in future studies. Finally, the eligible studies only performed univariate analyses; we cannot infer from our meta-analysis whether EGFR or KRAS mutations in ctDNA could be an independent factor or not.

Selection bias may exist in our paper. For EGFR and KRAS involved in lung cancers, striking differences in molecular alterations of these genes have been found in never and ever smokers [31]. Epidemiological studies of lung cancer showed that EGFR mutations occur more frequently in never smoker East Asia, while KRAS mutations occur more frequently in smokers and less common in never smoker East Asia [30]. In our paper, the rate of EGFR mutations is higher than usually expected, and the rate of KRAS mutations is much lower in the selected studies. This may be due to a high rate of never-smoker patients in our study.

Search methods for identification of studies

Criteria for considering studies for this review

(1) dealt with advanced NSCLC (stage IIIB or IV) patients only;

(2) analyzed the correlation between patient survival and EGFR mutations (exon 19 deletions or L858R) and/or KRAS mutations in ctDNA;

(3) had follow-up for overall survival (OS) and/or progression-free survival (PFS); and

Both prospective and retrospective studies were included. Reviews, comments, and case reports were excluded. Studies with less than five patients were also excluded.

We evaluated the quality of included studies using the Cochrane Collaboration’s tool for assessing risk of bias [32]. Specifically, studies were judged on (1) selection bias: studies that had an explicit statement of inclusion and exclusion criteria were rated as low risk of selection bias; (2) accuracy of exposure assessment, also called measure bias: studies with an explicit statement regarding ctDNA detection methods were rated as low risk; (3) accuracy of other variable assessment: other molecular alterations such as epigenetic alterations and EGFR T790M also influence the prognosis of NSCLC patients; (4) accuracy of outcome assessment; (5) bias due to incomplete follow-up (e.g., median follow-up length, range, and loss-to-follow-up rate were satisfactorily reported); (6) confounding, which included known or commonly discussed confounders in the relationship between ctDNA and survival, such as age, smoking, or other factors that were adjusted.

The primary outcome was PFS. The secondary outcome was OS. Two investigators (Fan GW, Zhang K) extracted the HRs and their 95% confidence interval (95% CI) to assess the prognostic value of EGFR and KRAS mutations in ctDNA. If HRs for ctDNA were not available, we calculated them indirectly using the methods of Parmar [33]. By convention, HR = 1 indicates a lack of association between ctDNA status and prognosis; HR > 1 indicates a worse survival for patients with ctDNA positive; HR < 1 represents a benefit outcome for the ctDNA-positive group.

Sensitivity analyses were conducted for the meta-analysis to check for stability of the overall results. Subgroup analyses were performed using a random-effects model because of the diverse clinical heterogeneity.

Analysis was carried out using Review Manager 5.3 and Stata 12.

This study was a literature-based study and no ethics approval was needed.

We thank Dr. Sun Min for his kind help with the data analysis.

This work was supported by the Special Fund for Health-scientific Research in the Public Interest from National Population and family Planning Commission of the P R China (No. 201402018).

27. Do H, Dobrovic A. Sequence artifacts in DNA from formalin-fixed tissues: causes and strategies for minimization. Clinical chemistry. 2015; 61:64-71.