Here, we performed a systematic review and meta-analysis of the impact of rs597668 in AD in Asian population using a total of 8686 samples including 2855 cases and 5831 controls. Meanwhile, we selected 17,008 AD cases and 37,154 controls in European population to evaluate the potential heterogeneity between East Asian and European populations [32].

The characteristics of all the selected studies

Table 1: The characteristics of six selected studies in this meta-analysis

We identified no potential heterogeneity in Asian populations with P=0.31 and I2 = 15.8%. Meta-analysis using the fixed effect model showed significant association between rs597668 and AD risk with P=0.023, OR=0.93, 95% CI 0.87-0.99 (Figure 1). All the funnel plots are symmetrical inverted funnels (Figure 2). The statistical test further provides evidence of symmetry with P=0.78.

Figure 1: Forest plot about the meta-analysis in Asian population. 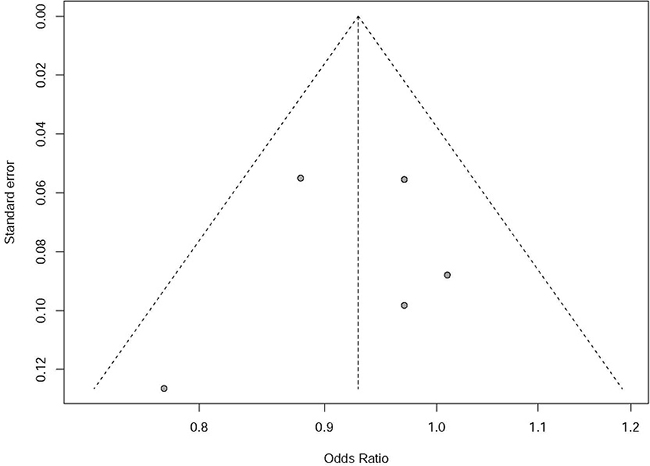 Meta-analysis in Asian and European populations

We identified significant heterogeneity in pooled Asian and European populations using C allele versus T allele model (P<0.0001, I2 = 87.7%). Meta-analysis with the random-effect model showed no association between rs597668 and AD risk with P=0.66, OR=0.97, 95% CI 0.85-1.11 (Figure 3). The funnel plot using all the selected studies is a symmetrical inverted funnel (Figure 4). The statistical test does not provide evidence of symmetry with P=0.034.

Figure 3: Forest plot about the meta-analysis in pooled Asian and European populations. 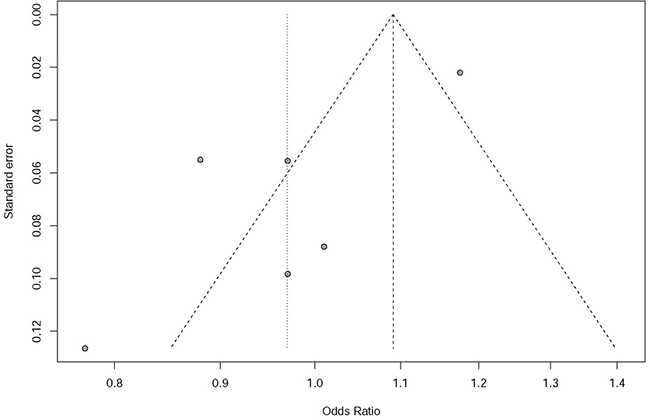 In addition to the involvement of EXOC3L2 in AD risk, previous studies also evaluated the EXOC3L2 expression [35–36]. Wallgard et al. identified the up-regulation of the mouse exoc3l2 homologue in brain vasculature [36]. Barkefors et al. identified that endothelial cells could express increased exoc3l2 levels in developing blood vessels, and that the EXOC3L2 protein is associated with components of the exocyst complex [35].

In this submission process, we identified that there was no study to evaluate the association between rs597668 and AD using a meta-analysis in East Asian population. This is the first study investigating the association between rs597668 and AD by meta-analysis in East Asian population. We think that these findings may be very helpful for the future genetic studies. Following studies with large-scale sample size are also required to verify our findings.