Long noncoding RNAs cancer susceptibility candidate 2 (CASC2) have been demonstrated as playing crucial regulatory roles in a few of cancers. However, the biological function of lncRNA CASC2 in bladder cancer are still unclear. In this study, we found that lncRNA CASC2 was significantly down-regulated in bladder cancer tissues and cell lines by quantitative real time-PCR and associated with advanced TNM stage (III/IV). Moreover, overexpression of lncRNA CASC2 remarkably reduced the cell growth, migration and invasion, as well as promoted early apoptosis of bladder cancer cell in vitro. Furthermore, we illustrated that lncRNA CASC2 inhibited Wnt/β-catenin signal pathway activity by decrasing the β-catenin expression and reversing the downstream target gene expression of Wnt signaling pathway. Taken together, lncRNA CASC2 plays an pivotal role in bladder tumorigenesis and progression and may act as a potential biomarker for the treatment of bladder cancer.

Bladder cancer is one of the most prevalent urologic malignancy and the fourth more commonly diagnosed cancer among men worldwide [1]. The patients suffering from bladder cancer are surgically treated with radical cystectomy (RC), radiation therapy, and postoperative instillation of chemotherapy or immunotherapy [2, 3]. Although there have been great improvements for treatment of bladder cancer, its great recurrence rate and extremely unsatisfactory prognosis with 5-year overall survival rates [4]. Thus, it is urgent need to perform molecular mechanisms research to discover novel molecular biomarkers for the treament of bladder cancer.

Long non-coding RNAs (lncRNAs) with a length of >200 nucleotides are highly conservative across mammalian species [5]. Recent studies have showed that lncRNAs were tightly associated in carcinogenesis and can be used as the potential biomarkers of cancer [6]. LncRNAs, such as GAS5, UCA1, NEAT1, PANDAR, HOTAIR and H19 have been demonstrated that they showed crucial roles in the progression, metastasis, recurrence and prognosis of bladder cancer [7–12]. However, the functions of lncRNAs in bladder cancer remains largely unclear.

LncRNA Cancer Susceptibility Candidate 2 (CASC2), a novel human lncRNA mapping to 10q26 in humans, has been originally characterized as a downregulated gene and acted as a tumor suppressor gene in endometrial cancer [13]. Wang et al demonstrated that CASC2 plays a tumor suppressive role in glioma via negative regulation of miR-21 [14]. In addition, low expression of long noncoding RNA CASC2 indicates a poor prognosis and regulates cell proliferation in non-small cell lung cancer [15] and renal cell carcinoma cells [16]. Besides, the long noncoding RNA CASC2 functions as a competing endogenous RNA by sponging miR-18a in colorectal cancer [17]. Meantime, long non-coding RNA CASC2 suppresses the proliferation of gastric cancer cells by regulating the MAPK signaling pathway [18]. However, the role of lncRNA CASC2 in the progression of bladder cancer is unknown and needed to be further explored.

Our results showed that lncRNA CASC2 expression levels were lower in tumor tissues than those in adjacent normal tissues and down-expressed in the bladder cancer cell lines. And overexpression of lncRNA CASC2 remarkably inhibited the growth, arrested migration and invasion, as well as induced early apoptosis and attenuated the activation of Wnt/β-catenin signal pathway in T24 and 5637 bladder cancer cells.

Expression of CASC2 was down-regulated in bladder cancer and cells 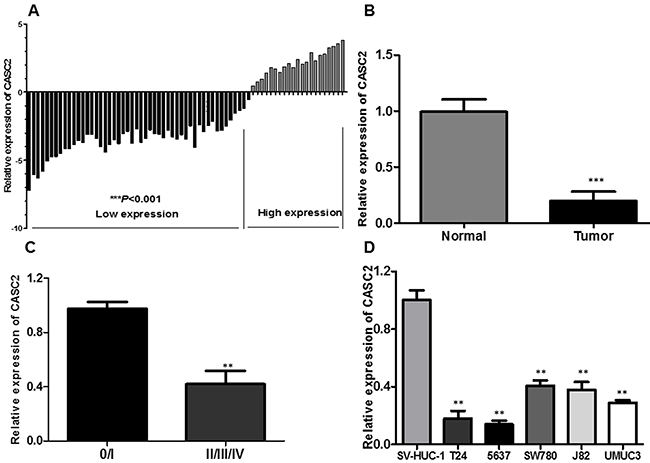 We detected that lncRNA CASC2 expression was comparatively lower in T24 and 5637 cell lines than that in SW780, J82 and UMUC3 cancer cell lines (Figure 1C). Therefore, we selected T24 and 5637 cell lines for the following biological function studies. To further explore the role of CASC2 in bladder cancer cells, the lncRNA pcDNA-CASC2 was designed and transfected into T24 and 5637 cells. As shown in Figure 2A, cells transfected with pcDNA-CASC2 presented a remarkably increased mRNA expression level of CASC2 compared with the empty vector group in both cells by qRT-PCR (P<0.05; Figure 2A). To determine the effect of CASC2 on the proliferation of bladder cancer cell in vitro, MTS assays showed that the overexpression of CASC2 apparently abrogated the proliferation rate of T24 and 5637 cells (P<0.05; Figure 2B and 2C). Moreover, we used a colony formation assay to further examine the role of CASC2 on growth of T24 and 5637 cells. Consistently, the results showed that bladder cancer cells transfected with pcDNA-CASC2 significantly reduced the colony numbers (P<0.01; Figure 2D). Besides, flow cytometry was used following transfection to assess cell cycle distribution. The data demonstrated that the cell population in the G0/G1 phase was expanded but the S phase population was limited after the overexpression of CASC2 compared with the negative group cells (Figure 2E), further indicating that overexpression of CASC2 may restrain cancer cell growth by regulating the cell cycle. Altogether, these results clarified that CASC2 may function as a suppressor gene promoting bladder cancer cell proliferation. 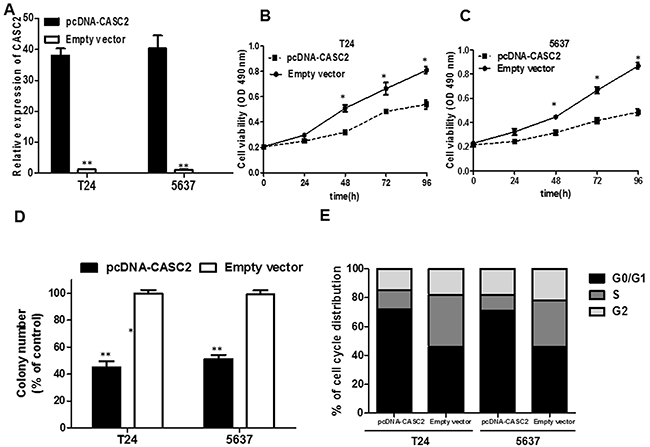 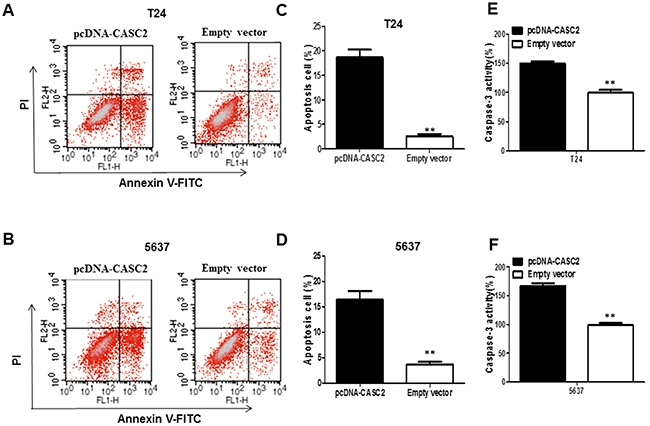 Figure 3: The overexpression of lncRNA CASC2 augmented the apoptosis of bladder cancer cells. A and B. Apoptosis of T24 and 5637 cell lines was determined by flow cytometry. C and D. Histogram of percentage of apoptotic cells, according to (A) and (B). E and F. Caspase-3 colorimetric assay was used to detect the Caspase-3 activity; GAPDH was used as control. Each assay was performed in triplicate. Data are mean ± SD. *P<0.05, **P<0.01.

To further probe the influence of CASC2 on bladder cancer cell migration and invasion, we conducted transwell assays in T24 and 5637 cells. Overexpression of CASC2 obviously impaired T24 and 5637 cells migration ability compared with the empty vector group (P<0.01, Figure 4A and 4B). Next, transwell invasion assay was carried out to document the effect of CASC2 on the invasiveness of bladder cancer cells. The results illuminated that overexpressio of CASC2 induced prominent suppression in ability of cell invasion compared with the empty vector group (P<0.01, Figure 4C and 4D). 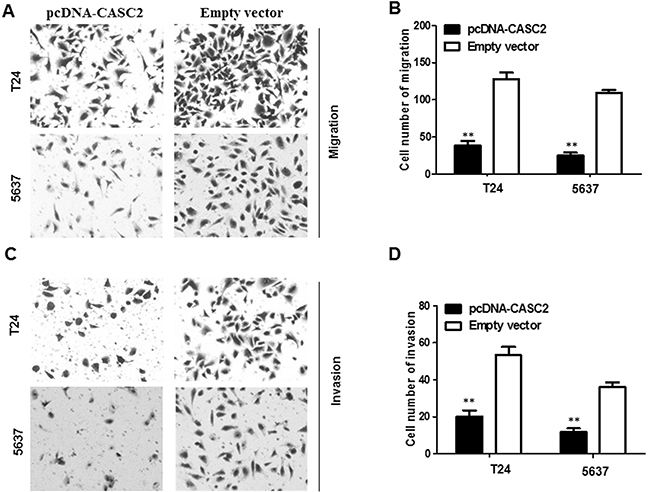 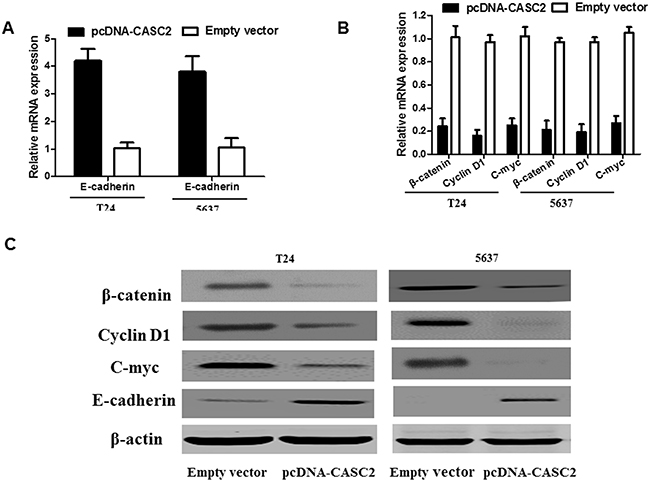 Figure 5: Effect of CASC2 on Wnt/β-catenin signaling pathway in bladder cancer cells. T24 and 5637 cells were transfected with pcDNA-CASC2 and Empty vector for 48 h. Overexpression of CASC2 affected the Wnt/β-catenin signaling pathway. Western blot and qRT-PCR analysis showed that overexpression of CASC2 inhibited the β-catenin, cyclin D1 and c-myc expression in the T24 and 5637 cell. Each assay was performed in triplicate. Data are mean ± SD. *P<0.05, **P<0.01.

In summary, our findings indicated that CASC2 was strikingly downregulated in bladder cancer tissues. Overexpression of CACS2 could inhibit bladder cancer cell proliferation, induce cell apoptosis and suppress cell migration and invasion in vitro. Moreover, Overexpression of CACS2 contributed to the inactivation of Wnt/β-catenin signaling pathway. Therefore, CACS2 might serve as a tumor suppressor lncRNA that abrogates growth of bladder cancer cells and inactivates the Wnt/β-catenin signaling pathway.

72 pairs of bladder cancer tissues and the pair-matched adjacent normal tissues were obtained from the Taihe Hospital of Hubei University of Medicine during Jun 2014 to Jul 2015. All the patients received partial or radical cystectomy. All specimens were frozen immediately in liquid nitrogen and stored at -80 °C until RNA extraction. None of the patients from whom the samples were obtained had undergone preoperative chemotherapy or radiotherapy. Informed consents were obtained from all patients and this study was approved by the Clinical Research Ethics Committee at the Taihe Hospital of Hubei University of Medicine.

Normal urothelial cells (SV-HUC-1) cells were purchased from ATCC (American Type Culture Collection). T24, 5637, SW780, J82 and UMUC3 cells were purchased from the Chinese Academy of Sciences (Shanghai, China). SV-HUC-1 cells were maintained in F12K medium (Invitrogen, Carlsbad, CA, USA) supplemented with 1% antibiotics (100 units/mL penicillin and100 μg/ mL streptomycin sulfates) and 10% fetal bovine serum (FBS; Hyclone, Logan, UT, USA). The 5637 cells and SW780 cells were cultured in RPMI-1640 Medium (Invitrogen) plus 1% antibiotics and 10 % fetal bovine serum. The UMUC3 and T24 cells were cultured in DMEM (Invitrogen) plus 1% antibiotics and 10 % fetal bovine serum. All cell lines were cultured at 37°C with an humidified atmosphere of 5% CO2 in incubator. All cell lines have been tested and authenticated by DNA (short tandem repeat genotyping) profiling before use.

The CASC2 sequence was synthesized according to the full-length CASC2 sequence and then subcloned into a pcDNA3.1 vector (GenePharma, Suzhou, China). The empty pcDNA3.1 vector was used as the negative control. The pcDNA-CASC2 or empty pcDNA3.1 vector was transfected into T24 and 5637 cells cultured in six-well plates using by X-treme GENEHP DNA transfection reagent (Roche, Basel, Switzerland) according to the manufacturer’s guide. After 48 h, cells transfected with pcDNA were harvested to detect the expression level of CASC2 by qRT-PCR.

Cell proliferation was assayed using a cell proliferation kit (MTS) (Promega, Madison, WI) according to the manufacturer’s protocol. Cells transfected were seeded into 96-well plates at a density of 3×103 cells/well in 100μl medium. Cell growth proliferation was assessed every 24 h according to the manufacturer’s instructions. 20μl of MTS regent was added to each well and incubated at 37 °C for 2 h. Absorbance was recorded at 490 nm with Envision microplate reader (PerkinElmer). Experiments were performed in triplicate.

Tumor cells transfected were seeded in 6-well plates at a density of 500 cells per well and incubated for 10-14 days for the colony formation assay. The cells were gently washed with PBS and then fixed with 4% paraformaldehyde and stained with 0.2% crystal violet (Sigma). Colonies were photographed and counted by Image J software (NIH, Bethesda, MD). The assays were performed in triplicates.

The bladder cancer cells transfected with pcDNA-CASC2 or empty vector were harvested for 48 h for cell apoptosis and cell cycle analysis. The cell apoptosis was determined by the Annexin V-FITC apoptosis kit (Sigma-Aldrich Chemical Company, St Louis MO, USA) according to the manufacturer’s instructions. The Annexin V-FITC and PI fluorescence levels were measured by flow cytometry (BD Biosciences, FACS Calibur). The Annexin V-positive cells (both PI-negative and -positive) were defined as apoptotic cells. For the cell cycle analysis, cells were collected and fixed with 70 % pre-cooling anhydrous ethanol at −20 °C overnight and incubated with propidium iodide (PI) dye liquor (Sigma) in the presence of Rnase A (Promega) for 30 min at room temperature. The cell cycle distribution was analyzed by flow cytometry (FACSCalibur, BD Biosciences).

Briefly, bladder cancer cells T24 and 5637 were plated at 5 ×105 cells/well in a 6-well plate for 24 h, then transfected with corresponding pcDNA-CASC2 or empty vector, respectively. At 48 h after transfection, cleaved caspase-3 activity were measured with the Caspase-3 Colorimetric Assay kit (R&D Systems, Minneapolis, USA) according to the manufacturer’s recommendations. The assays were performed in triplicates.

The 24-well transwell chamber with 8μm pores was purchased from BD (BD Biosciences, USA). Cells transfected (1 × 105 cells per well) were suspended in 100μl serum-free medium and then seeded to the upper chamber in the 24-well plate, and 600μl medium with 10% FBS was filled with the lower chamber. After incubating 24h at 37°C, the cells migrated into the lower membrane surface were fixed with methanol, stained with 0.5% crystal violet and then counted under a light microscope at ×100 magnification in five randomly selected fields across the center and the periphery of the membrane. For the cell invasion assay, the transwell membrane was pre-coated with 30 μl of Matrigel (1:3 mixed with PBS; BD Biosciences) and proceeded the same as described above. Experiments were performed in triplicate.

The present study was supported by the National Natural Science Foundation of China (grant no. 81401447) and the Key Discipline Project of Hubei University of Medicine.