In this retrospective analysis, we evaluated associations between albumin to globulin ratio (AGR), clinicopathological characteristics, and survival in 592 patients with localized or locally advanced clear cell renal cell carcinoma (CCRCC) prior to nephrectomy. We found that low AGR was associated with more aggressive tumor behavior; patients with low AGR had poorer overall survival (OS) and cancer-specific survival (CSS) in Kaplan-Meier survival analyses both before and after propensity score matching, which was used to compensate for differences in baseline clinicopathological characteristics. AGR was an independent prognostic factor for both OS (HR: 6.799; 95% CI: 3.215−14.377; P < 0.001) and CSS (HR: 8.806; 95% CI: 3.891−19.928; P < 0.001), and its prognostic value was higher than that of other established inflammation-based prognostic scores. When AGR was incorporated into a prognostic model that included T stage, neutrophil to lymphocyte ratio (NLR), and monocyte to lymphocyte ratio (MLR), the resulting nomogram predicted 3- and 5-year OS in the patients more accurately than when AGR was not included. In conclusion, AGR may be particularly useful for improving clinical outcome predictions for patients with localized or locally advanced CCRCC.

Renal cell carcinoma (RCC) accounts for 2%–3% of adult malignancies, and is the second most common type of urogenital neoplasm after bladder cancer [1]. Clear cell renal cell carcinoma (CCRCC) is the most common pathological subtype, accounting for 70%–80% of all RCC cases. As RCC is not sensitive to chemoradiotherapy, radical nephrectomy remains the most promising treatment for patients with localized or locally advanced RCC. However, postoperative recurrence rates of 20%–30% are observed after this treatment [2]. In order to evaluate postoperative risks and to improve individualized treatment, several prognostic models based on clinicopathological characteristics, such as TNM stage [3] and Fuhrman grade [4], have been established to predict outcomes in RCC patients. However, prognostic models based on clinicopathological characteristics alone are less effective for patients with localized or locally advanced CCRCC; a novel prognostic model is urgently needed to improve outcome predictions for these patients.

Albumin and globulin are major serum proteins, and low albumin and high globulin levels reflect not only malnutrition, but also a chronic inflammatory state in the body [5, 6]. The albumin to globulin ratio (AGR) better reflects the nutritional and inflammatory state by combining these two indicators in one measure. Inflammatory reactions associated with malnutrition greatly reduce immune system function, alter the tumor microenvironment, promote tumor growth and metastasis, and negatively impact prognosis in cancer patients [7, 8]. Accordingly, AGR seems to be indicative of disease progress in cancer. Several studies have confirmed that AGR is associated with prognosis in breast [9], colorectal [10], nasopharyngeal [11], and lung cancers [12]. However, the association between AGR and prognosis in RCC patients has not yet been examined.

In this paper, we evaluated the prognostic value of preoperative AGR and compared its value to that of other inflammation-based prognostic scores. Furthermore, we identified a nomogram that combines inflammation-based prognostic scores with clinicopathological characteristics to accurately predict 3- and 5-year overall survival (OS) in patients with localized or locally advanced CCRCC after radical or partial nephrectomy.

Table 2: Associations between AGR and clinicopathological characteristics in primary cohort patients before and after PSM

OS (P < 0.001) and CSS (P < 0.001) were worse in patients with low AGRs (≤ 1.22) than in patients with high AGRs (> 1.22) prior to propensity score matching (PSM) (Figure 1A, 1B). Because some clinicopathological characteristics differed between the low and high AGR patient groups (Table 2), we performed PSM to minimize these differences. In the PSM analysis, 52 patients selected from the high AGR group were each paired with one low AGR patient using a nearest-neighbor algorithm. After PSM, clinicopathological characteristics were balanced and evenly distributed between the low and high AGR groups (all P > 0.05) (Table 2). Kaplan-Meier survival curves for the post-PSM low and high AGR groups confirmed that OS and CSS were still worse in low AGR patients, even when controlling for differences in clinicopathological characteristics (Figure 1C, 1D). 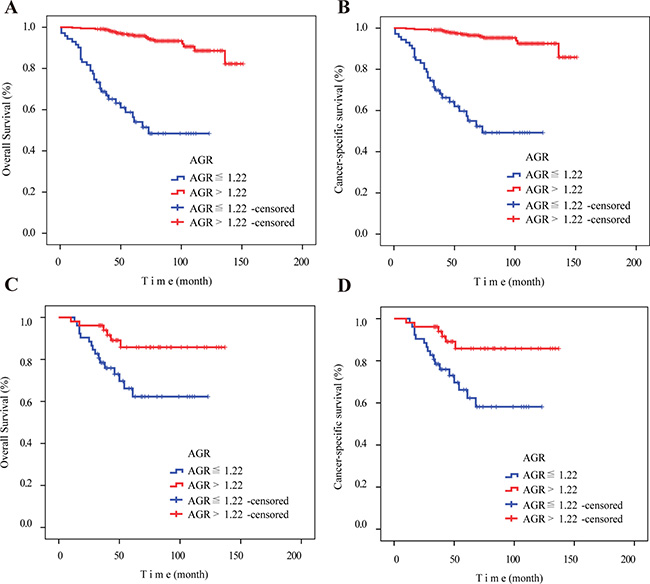 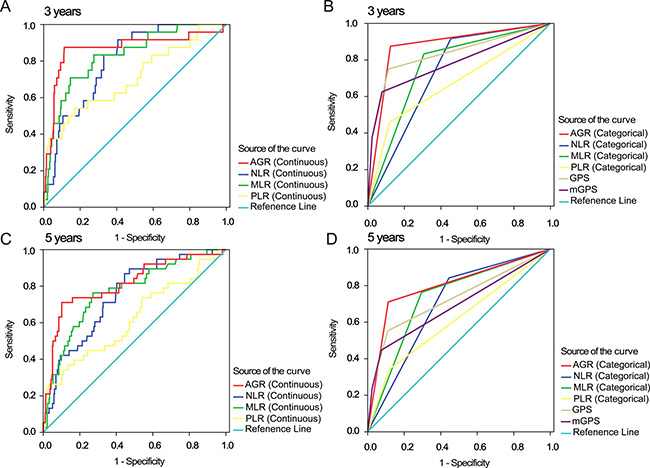 Table 4: Comparison of the discriminatory ability of inflammation-based prognostic scores in primary cohort patients before PSM

Multivariate analysis indicated that T stage, N stage, AGR, NLR, MLR, GPS, and mGPS were independent risk factors for OS (Table 3); these scores became candidates for inclusion in the final model. Ultimately, the optimal nomogram integrated T stage, AGR, NLR, and MLR to predict 3- and 5-year OS (Figure 3A). The initial concordance index (C-index) values of the Leibovich score [13], SSIGN score [14] and TNM stage of 0.847, 0.838, and 0.806, respectively, increased to 0.899, 0.898, and 0.884 when the AGR (C-index 0.783) was incorporated. The C-index for the nomogram was 0.914, indicating that it had a better predictive ability than Leibovich score (P < 0.001), SSIGN score (P < 0.001), and TNM stage (P < 0.001). Calibration plots for the probability of survival at 3 or 5 years after surgery demonstrated virtually no departures from ideal predictions, confirming the internal validity of the results (Figure 3B, 3C). 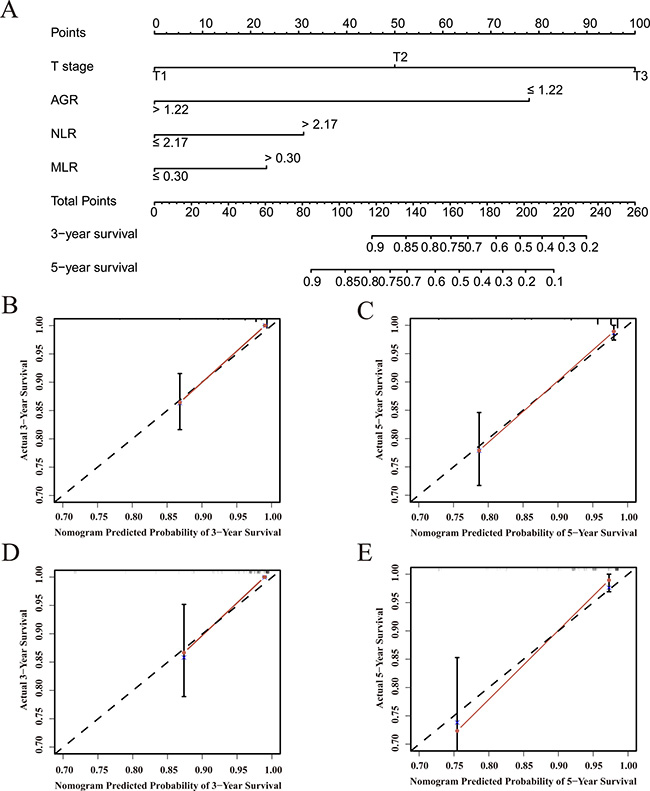 Validation of predictive accuracy of the nomogram for OS

In this study, we analyzed the prognostic power of AGR and the ability of a nomogram that combined AGR with other inflammation-based prognostic scores and clinicopathological characteristics to predict 3- and 5-year survival in patients with localized or locally advanced CCRCC. We found that AGR was an independent prognostic factor for OS and CSS and had a better discriminatory ability than the established inflammation-based prognostic scores. Furthermore, the nomogram that integrated AGR with T stage, NLR, and MLR predicted OS with an accuracy of 0.914.

In recent years, the relationship between AGR, which is a classic indicator of liver function, and cancer has received increasing attention. Research has shown that low AGR is correlated with tumor incidence and mortality rates among healthy people [15], and that AGR is associated with prognosis in breast [9], colorectal [10], nasopharyngeal [11] and lung cancer patients [12]. To our knowledge, the present study is the first to analyze the association between AGR and survival in CCRCC patients.

Several potential mechanisms involved in nutrition and inflammation might contribute to the prognostic value of AGR in cancer. Malnutrition is relatively common in cancer patients, and it often develops into cancer cachexia, which accelerates disease progression. Inflammation associated with tumors involves not only inflammatory factors generated by tumor cells, but also those released during the processes of tissue remodeling and rehabilitation and angiogenesis [16]. Consequently, in addition to changes in the local tumor microenvironment, changes in levels of peripheral inflammatory factors, such as tumor necrosis factor (TNF), interleukin (IL)-1, -6, and -8, and vascular endothelial growth factor (VEGF), also promote tumor growth and metastasis [16–18]. Thus, malignant tumor progression promotes malnutrition and increases inflammation, and vice versa. Effective, practical indicators of nutritional and inflammation status may therefore be useful not only for quantifying tumor malignancy, but also for evaluating patient prognosis. AGR may be a particularly useful indicator in this regard, as it combines nutritional and inflammatory indices. Generally, serum albumin level is thought to reflect the body’s nutritional status, and recent studies have shown that it is also an effective indicator of inflammatory state [6, 19, 20]. Serum globulin plays an important role in the body’s immune and inflammatory responses as well. High serum globulin levels result from the accumulation of acute-phase proteins and immunoglobulins, and increased expression of these proteins is indicative of a persistent inflammatory state [10]. By combining the albumin and globulin indicators in a single measurement, AGR more accurately reflects the body’s nutritional and inflammatory states and may be particularly useful as an outcome indicator for cancer patients.

Usually, outcome predictions for RCC patients are based on clinicopathological characteristics, such as the TNM staging system and the Fuhrman grading system, and few existing models can successfully predict survival of patients with localized or locally advanced CCRCC. Here, we identified a nomogram that incorporated inflammation-based prognostic scores and traditional staging systems to predict 3- and 5-year OS in these patients more accurately than Leibovich score, SSIGN score, and TNM stage. The nomogram was equally effective in predicting outcomes in the validation cohort patients, and calibration plots for both the primary and validation cohorts revealed that the predicted survival probabilities were closely correlated with the actual survival rates. The well-established Leibovich and SSIGN scores incorporate multiple clinical and pathologic variables, including T stage, N stage, M stage, tumor size, Fuhrman grade, and necrosis. Here, we evaluated the prognostic value of all of these variables individually and found that tumor size, Fuhrman grade, and necrosis were not independent prognostic factors in our patient cohort, suggesting that the two classical prognostic scores may not be useful for patients with localized or locally advanced CCRCC. The incorporation of inflammation-based prognostic scores in addition to clinicopathological characteristics in our nomogram likely enhanced its predictive accuracy. Moreover, AGR, NLR, and MLR can be determined from routine peripheral blood tests conducted during preoperative examinations. The nomogram used here may therefore serve as a reliable tool for predicting survival in patients with localized or locally advanced CCRCC, as well as for selecting patients for adjuvant therapy trials.

Some limitations should be considered when interpreting the results of this study. First, the relatively small number of patients involved were enrolled at a single institution; the results should therefore be verified in a larger, standardized group of patients. In addition, because this was a retrospective study, there were methodological differences among the studies examined, and a multicenter prospective study should be conducted to confirm our findings.

Written informed consent was obtained from all patients enrolled in this study. The study was approved by the Ethics and Scientific Committees of The Third Affiliated Hospital of Soochow University. Clinicopathological data were collected from 592 patients with RCC who underwent radical or partial nephrectomy in The Third Affiliated Hospital of Soochow University (China) between 2003 and 2013. To ensure that data were collected objectively and accurately, the following exclusion criteria were used: patients with a history of anti-tumor therapy and other concurrent tumors; other acute or chronic concurrent non-cancer diseases (including liver disease, inflammation, and infection); concurrent distant metastasis; patients lost to follow-up. 176 patients who were enrolled between May 2012 and December 2013 were assigned to the external validation cohort; all other patients were assigned to the primary cohort.

The optimal cut-off values were determined using receiver operating characteristics (ROC) curve analysis. OS rates were calculated using the Kaplan–Meier method and compared to detect statistically significant differences using the log-rank test. PSM was conducted using a nearest-neighbor matching algorithm with a maximum tolerated difference between propensity scores of less than 30% of the propensity score SD. Mantel-Cox regression methodology was used for univariate analysis of implicit factors affecting survival. Only variables with P < 0.05 in univariate analyses were included in the multivariate Cox’s proportional hazards model. AUC values of the ROC curves were compared to evaluate the discriminatory ability of AGR and the other established inflammation-based prognostic scores in the assessing prognosis. Differences were compared with MedCalc software (Version 11.4.2.0, MedCalc, Inc., Belgium) to determine whether they were statistically significant.

The nomogram was constructed based on the multivariate analysis results. To find a best-fit model, backward stepwise selection with the Akaike information criterion (AIC) was used in a Cox proportional hazards regression model [29]. Both discrimination and calibration were used to evaluate nomogram performance. The c-index and the ROC curves were used to compare OS discrimination ability among different models. Confidence intervals (CIs) were obtained by creating 500 bootstrap samples from the entire data set and replicating the estimation process.