Colorectal cancer (CRC) is one of the most common cancers worldwide, and microRNAs play important roles in CRC progression. This study aimed to investigate the roles of miR-146a-5p in human CRC and their molecular mechanisms. First, we found that miR-146a-5p was significantly upregulated in CRC tissues and promoted the migration of CRC cells. Then, we identified carboxypeptidase M (CPM) as a direct target of miR-146a-5p, and found that it inhibited the migration and invasion of CRC cells. Our results also showed that CPM expression was positively correlated with overall survival and negatively correlated with recurrence, lymph node invasion, and N stage. Furthermore, we demonstrated that both miR-146a-5p and CPM regulated Src and FAK expression, while the Src-FAK signaling pathway is widely known to be associated with the migration and invasion of multiple tumor cells. This study is the first to demonstrate the functional and mechanistic relationship of the miR-146a-5p/CPM/Src-FAK axis and its effect on the migration and invasion of CRC cells. Thus, miR-146a-5p represents potential targets for CRC diagnosis and therapy.

Colorectal cancer (CRC) is a major cause of cancer related deaths [1], and the third most commonly diagnosed cancer worldwide [2]. Despite recent advances in treatment, the prognosis of patients with colorectal cancer (CRC) remains substandard. Metastatic recurrence following curative surgery is the leading cause of mortality. Therefore, it is imperative to identify prognostic markers to predict the clinical outcome of CRC patients [3]. MicroRNAs (miRNAs) are a family of endogenous, small, noncoding RNA molecules mediating a wide range of biological processes, including differentiation, proliferation, and apoptosis [4]. miRNAs can function as either oncogenes or tumor suppressor genes, depending on the type of tumor or the cellular context [5], and their deregulation is frequent in human colorectal cancers (CRCs) and their deregulation is linked to cancer progression and clinical outcome [6, 7].

miR-146a-5p was upregulated in CRC and promoted CRC migration 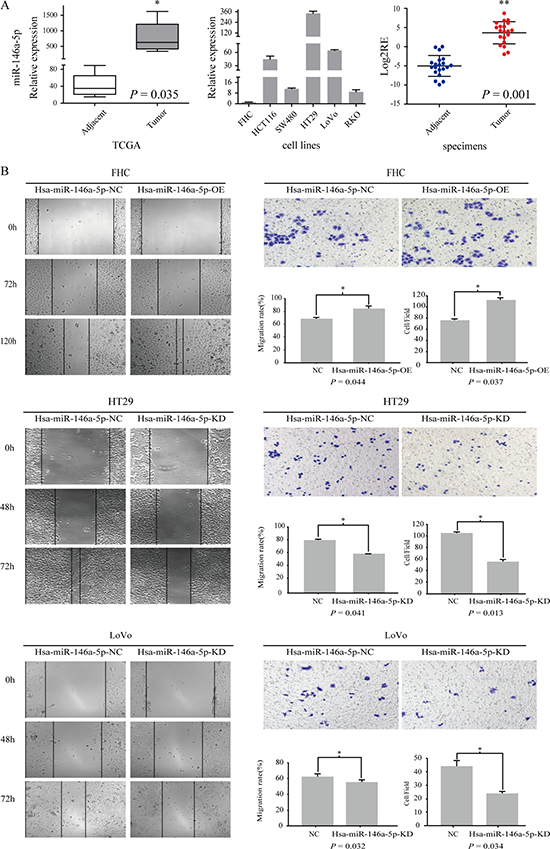 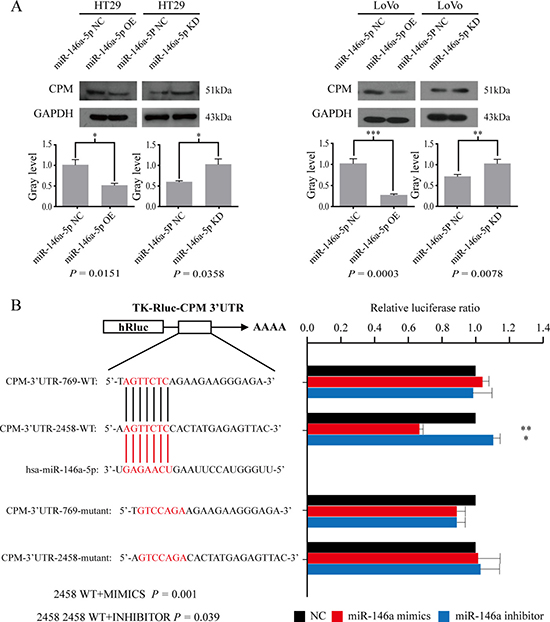 Each test was repeated three times.

CPM was downregulated in CRC and inhibited CRC migration and invasion 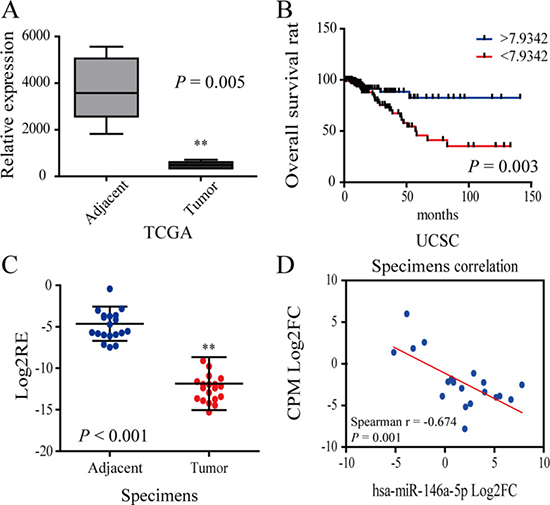 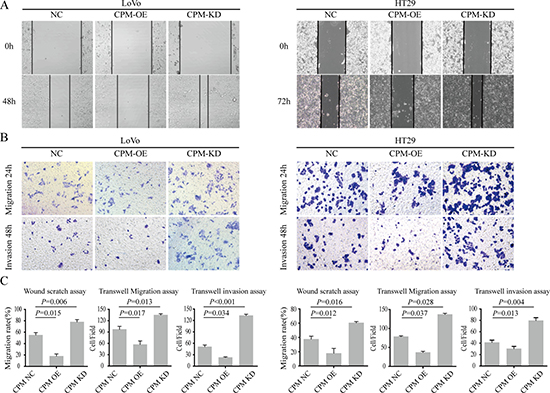 As previously reported, CPM was likely responsible for the initial metabolism of EGF, while FAK and c-Src (also known as Src) have been shown to form a transient, active complex following integrin engagement by EGF receptors [8]. Therefore, in this research, we hypothesized that the conversion of EGF by CPM affected its combination with EGFR and further affect the EGFR/Src/FAK signaling pathway in CRC. In this study, we focus on the impact of miR-146a and CPM on the SRC/FAK axis. Effect of CPM on the EGF/EGFR axis will serve as the focus of our future research. 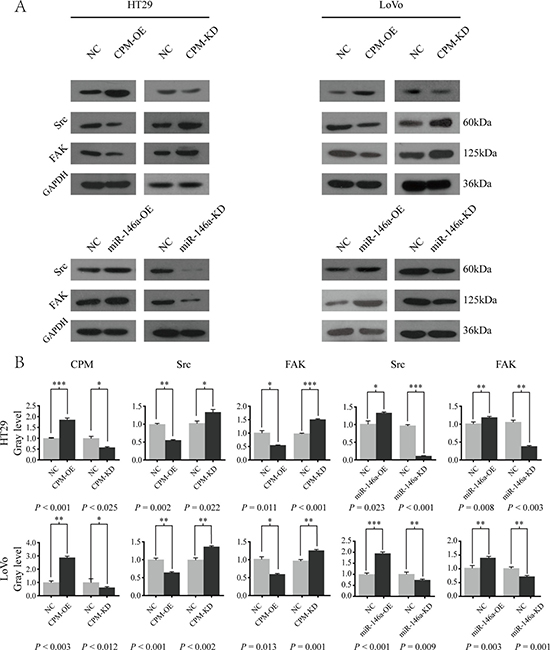 We used bioinformatics and luciferase assays to demonstrate that CPM was the direct target gene of has-miR-146a. CPM is a membrane-bound, zinc-dependent protease that cleaves C-terminal basic residues, such as arginine or lysine, from peptides/proteins [10]. Anguraj Sadanandam showed that CPM is highly expressed in colorectal enterocytes [11]. Given its wide distribution in human tissues, CPM is believed to play important roles in the control of peptide hormone and growth factor activity at the cell surface and in the membrane-localized degradation of extracellular proteins [12]. In recent years, CPM has emerged as a potential cancer biomarker [16]. In this study, we found that CPM expression was lower in CRC tissues than that in adjacent tissues. CPM expression in CRC specimens was also positively correlated with overall survival and negatively correlated with recurrence, N stage and lymph node invasion.

CPM, both in its membrane-bound and soluble forms, was likely responsible for the initial metabolism of EGF and the appearance of des-Arg53-EGF in interstitial and biological fluids [13]. The significance of the conversion of EGF to des-Arg53-EGF in biological fluids or on target cells was not clear and it could either exhibit additional activities or be further degraded [14]. Activation of ErbB2 (This gene encodes a member of the epidermal growth factor receptor family) and downstream signaling pathways can lead to increased Src protein synthesis and decreased Src protein degradation resulting in Src up-regulation and activation, which play critical roles in ErbB2-mediated breast cancer invasion and metastasis [15]. More commonly found in colon cancer is elevated expression of wild-type (wt) c-Src (also known as Src). Indeed, elevated protein levels and/or catalytic activity of c-Src have been detected in a number of human cancers, including lung, skin, colon, breast, ovarian, endometrial, and head and neck malignancies [16]. c-Src also interacts with focal adhesion kinase (FAK) that is postulated to play a key role in cancer metastasis by modulating the formation and turnover of focal adhesions [17]. Exploitation of FAK activity in human tumors occurs through elevated expression, a situation that correlates with increased cancer cell motility, invasiveness, and proliferation [18]. FAK and c-Src have been shown to form a transient, active complex following integrin engagement by EGF receptors [8].

Src is frequently deregulated in human colorectal cancer (CRC), and Src increased activity has been associated with poor clinical outcomes [19, 20]. Normal Src overexpression can induce high invasiveness of advanced cancer cells in vitro, which is consistent with the proposed role for Src in CRC metastasis [21]. Hong Ji and David W reported that Src (v-Src) was expressed in exosomes in CRC. In particular, the study demonstrated higher v-Src levels in exosomes from a metastatic cell lines (SW620) versus non-metastatic cell lines (SW480) [22, 23]. Src-FAK is part of a complex network of intracellular signals that are important in regulating cancer cells [24]. Wu JC and Chen YC reported that the Src_SH2 domain was regulated by FAK, and the FAK-dependent association of the Src_SH2 domain was necessary and sufficient for Src FA targeting [25, 26], and inhibition of Src targeting into FAs significantly reduced cell migration [27]. FAK is a widely expressed cytoplasmic protein tyrosine kinase involved in integrin-mediated signal transduction. FAK plays an important role in the control of several biological processes, including cell spread, migration, and survival [28]. In CRC samples, FAK was overexpressed, and positive FAK expression correlated with lymph node metastasis and cellular differentiation [17]. Increased dosage of the FAK gene was also observed in many cell lines derived from human tumors of the lung, breast and colon [18]. In summary, our study showed that miR-146a-5p was upregulated in CRC and promoted migration and invasion in vitro. Moreover, CPM was identified as a direct target of miR-146a-5p. CPM, which was downregulated in CRC, also exhibited the potential to inhibit the migration and invasion, and affected the prognosis of CRC. Our results showed that CPM and miR-146a could regulate the expression of Src and FAK. Thus, we hypothesize that miR-146a promotes the migration and invasion of CRC by inhibiting CPM, thereby inducing Src and FAK upregulation.

Seventy pairs of samples from CRC patients were included in this study for immunohistochemistry (IHC), and an additional 20 pairs of CRC patient samples were included for qRT-PCR. All patients were pathologically diagnosed. Patients with a history of other solid tumors, radiotherapy and chemotherapy were excluded. Suitable formalin-fixed paraffin-embedded (FFPE) tissue samples were subjected to clinicopathological examination, and follow-up data were available for all patients. The tumor stage was defined in accordance with the AJCC staging system (2009 version).

The differences in miR-146a-5p, CPM, Src and FAK (PTK2) expression were analyzed using the TCGA and UCSC Cancer Browser (https://genome-cancer.ucsc.edu/proj/site/hgHeatmap) databases. Then, the target gene of miR-146a-5p was locked using a combination of Targetscan and at least two of the other five algorithms (miRanda, miRDB, miRWalk, RNA22, and SUM) compiled with at least three of the six algorithms (miRanda, miRDB, miRWalk), The Spearman correlation coefficient between the Log2FC of these candidate targets and the Log2FC of miR-146a-5p was calculated according to the data fromUCSC Cancer database. We then assessed whether these candidate target genes were downregulated in CRC tissues by referencing the Oncomine database. The target was downregulated more than 20 data sets for statistical significance of P < 0.05, FC ≥ 2. Candidate target genes were selected by RT-PCR to identify the final target genes (Supplementary Figure 1A).

Five CRC cell lines (HT29, SW480, LoVo, RKO, and HCT116) and an immobilized colonic epithelial cell line (FHC) were included in this study. Each of the cell lines was maintained in 90% RPMI 1640 (Invitrogen, Carlsbad, CA) supplemented with 10% fetal bovine serum.

Lentiviral vectors for human miR146a-5p mimics/inhibitor carrying a green fluorescent protein (GFP) sequence, CPM knockdown, and CPM overexpression were constructed by Hanyin Co. (Shanghai, China). The recombinant lentivirus and the negative control (NC) lentivirus (GFP-lentivirus; Hanyin Co. Shanghai, China) were prepared and titered to 109 TU/mL (transfection units). To obtain the stable cell line, cells were seeded in 6-well dishes at a density of 2 × 105 cells per well. The cells were infected with the same viral titer with 8 μg/mL polybrene the following day. Approximately 72 h after viral infection, GFP expression was confirmed under a fluorescence microscope. The culture medium was replaced with selection medium containing 4 μg/mL puromycin. The cells were cultured for at least 14 days. The puromycin-resistant cell clones were isolated, amplified in medium containing 2 μg/mL puromycin for 7 to 9 days, and transferred to medium without puromycin. The clones were designated KD or OE cells.

SYBR-green based quantitative real-time PCR was conducted to assay relative miRNA and mRNA levels using the 7500 PCR system. For mature hsa-miR-146a-5p and CPM expression analyses, gene-specific primers were purchased from GeneCopoeia, China. hsnRNA U6, and GAPDH.

Immunohistochemistry (IHC) was performed on tissues fixed with formaldehyde and embedded in paraffin wax. After deparaffinization and rehydration, the endogenous peroxidase activity was blocked and antigen retrieval was performed. The primary rabbit antibody (anti-CPM; 1/100 dilution; abcam ab150405) was incubated overnight at 4°C. After carefully washing and incubation with specified HRP-conjugated secondary antibody, protein expression was detected using 3,3N-diaminobenzidine tertrahydrochloride (DAB).

A reporter vector containing the human CPM 3′UTR was cloned. Two putative miR146a-5p binding elements in the region (769–775 and 2458–2464) were mutated from AGTTCTC to GTCCAGA by site-directed mutagenesis. LoVo (2.5 × 105 cells) cells were seeded onto a 24-well dish. The next day, cells were transfected with the reporter and effector constructs using the Fugene HD reagent according to the manufacturer’s protocol. After 48 h, a luciferase assay was performed using the dual-luciferase reporter assay system (Promega).

The wound-healing assay was performed by seeding cells into 6-well plates at 2 × 105 cells/well, and the cells were cultured for 16 to 24 h until reaching ~90% confluency. Then, a scratch wound was made, and the culture medium was changed to the appropriate medium without FBS. The wound closure was detected at 0, 24, 48 h and 72 h. Each experiment was repeated at least three times.

Cells were seeded at 2 × 105 cells/well in the upper chamber of 8-μm pore-size Transwell 24-insert plates (Corning, NY, USA) with appropriate medium without FBS. The upper chambers were coated previously with 30 μg Matrigel (BD Biosciences, San Jose, CA, USA for Transwell-Matrigel invasion assay only), and the lower chamber contained appropriate medium with 10% FBS. After 48 h, cells on the bottom of the inserts were fixed in 4% paraformaldehyde and stained with 0.05% crystal violet. Then cells that invaded into the lower surface were counted in at least 10 fields using an 200× microscope (Olympus). Each experiment was repeated at least three times.

This study was approved by the Ethical Review Board of Zhongshan Hospital, Fudan University. Informed consent was obtained from all participants included in this study.

25. Kaplan KB, Bibbins KB, Swedlow JR, Arnaud M, Morgan DO, Varmus HE. Association of the amino-terminal half of c-Src with focal adhesions alters their properties and is regulated by phosphorylation of tyrosine 527. The EMBO journal. 1994; 13:4745–4756.