JAK-STAT signaling pathway has a crucial role in host innate immunity against viral infections, including HIV-1. We therefore examined the impact of HIV-1 infection and combination antiretroviral therapy (cART) on JAK-STAT signaling pathway. Compared to age-matched healthy donors (n = 18), HIV-1-infected subjects (n = 18) prior to cART had significantly lower expression of toll-like receptors (TLR-1/4/6/7/8/9), the IFN regulatory factors (IRF-3/7/9), and the antiviral factors (OAS-1, MxA, A3G, PKR, and Tetherin). Three months’ cART partially restores the impaired functions of JAK-STAT-mediated antiviral immunity. We also found most factors had significantly positive correlations (p < 0.05) between each two factors in JAK-STAT pathway in healthy donors (98.25%, 168/171), but such significant positive associations were only found in small part of HIV-1-infected subjects (43.86%, 75/171), and stably increased during the cART (57.31%, 98/171 after 6 months’ cART). With regard to the restoration of some HIV-1 restriction factors, HIV-1-infected subjects who had CD4+ T cell counts > 350//μl responded better to cART than those with the counts < 350/μl. These findings indicate that the impairment of JAK-STAT pathway may play a role in the immunopathogenesis of HIV-1 disease.

JAK-STAT signaling pathway is of importance in interferon (IFN)-mediated antiviral activities [4]. The IFN-stimulated gene factor 3 (ISGF3), formed by STAT1, STAT2, and interferon regulatory factor (IRF)-9, is a pivotal transcription factor in the JAK-STAT pathway [4–6]. The production of IFNs in cells is in response to the infection by a variety of viruses [6], which mainly recognized the presence of the viral genome or viral proteins by TLRs [3, 7–9]. There are 13 TLRs identified in mice and 11 in humans, of which TLR-3, –7, –8, and –9 can detect viral or bacterial nucleic acids [3], and TLR-1 and 6 can recognize some viral proteins [10]. All TLRs except TLR-3 have been found to be able to activate a common signaling pathway leading to the production of the proinflammatory cytokines via myeloid differentiation factor 88 (MyD88) [2]. TLR activation induces signaling cascades that mainly involve various IRFs [6], in which IRF3 and IRF7 played essential roles in virus-induced transcriptional activation of IFN-β [6, 11]. The phosphorylation of IRFs results in the induction of antiviral factors such as the IFN-stimulated gene 56 (ISG-56), myxovirus resistance-1 (MxA), 2′,5′-oligoadenylate synthetase I (OAS-1), and tetherin [12–14]. By blocking IFN signal transduction, including inhibition of phosphorylation [15] or nuclear translocation [16] of STAT1, STAT2, STAT3, or upregulation of SOCS [17, 18], virus can escape from the powerful antiviral effects of the IFN system [6, 19, 20].

It has been documented that HIV-1 infection could immediately trigger strong innate and adaptive immune responses [21]. In vitro studies revealed that IFN-λ can upregulate cellular anti-HIV-1 factors through JAK-STAT signaling pathway and significantly inhibited HIV-1 infection [1, 12]; TLR-3 activated by Poly I:C can induce multiple anti-HIV-1 factors and inhibit HIV-1 infection of macrophages [22]. These in vitro findings indicate that host innate immunity is critical in restricting HIV-1 replication and spread. However, by interfering with the signaling moleculars through its proteins, HIV-1 can suppress the induction of IFNs and antiviral ISGs and persist in immune cells. Our previous in vitro study [12] demonstrated that JAK-STAT pathway is involved in the induction of the anti-HIV-1 cellular factors and HIV-1 inhibition in macrophages [23]. Thus, it is of importance to determine whether HIV-1 infection impairs the JAK-STAT signaling pathway and whether cART can reverse HIV-1 infection-mediated injury of JAK-STAT pathway.

Data was expressed as mean ± SD.

Effect of HIV-1 infection or cART on TLRs and IRFs

TLRs can recognize viral RNA or DNA and initiate antiviral signaling pathways [7, 12, 24]. We thus examined six TLRs (TLR-1/4/6/7/8/9) that are known to be involved in antiviral immunity [9, 24, 25]. Figure 1 showed that peripheral blood mononuclear cells (PBMCs) from HIV-1-infected subjects before or one month after cART had lower levels of the TLRs than those of the control subjects. Three-month cART could reverse the levels of the TLRs. However, these levels of TLRs were still lower than those of uninfected subjects. We next analyzed the expression of three IFN regulatory factors (IRF-3, IRF-7 and IRF-9) that have critical role in the regulation of IFN. As shown in Figure 2, HIV-1-infected subjects had significant lower levels of IRF-7 and IRF-9 than the control subjects. Three-month treatment with cART could restore the levels of these IRFs (Figure 2). 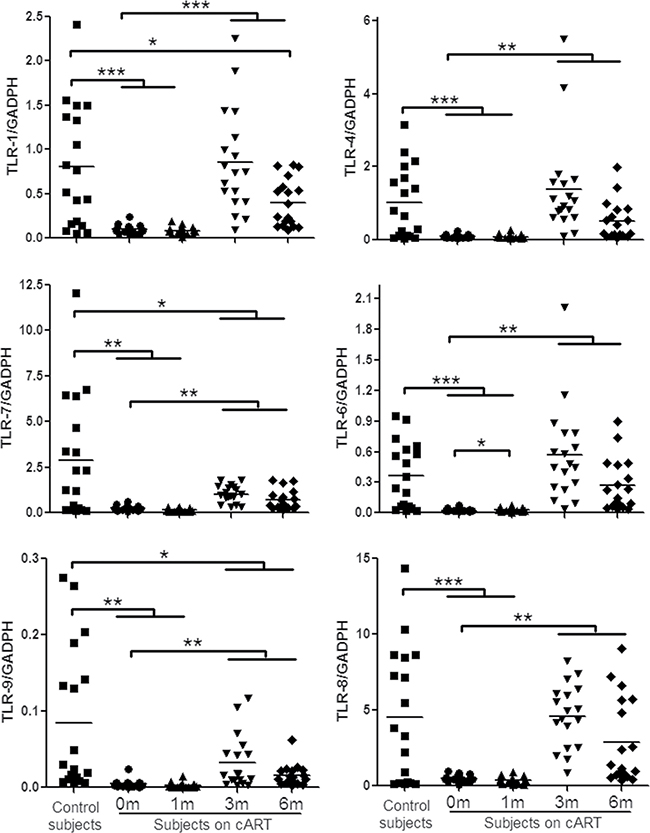 Figure 1: TLRs expression in PBMCs of HIV-1-infected subjects on cART. PBMCs were collected from HIV-1-infected subjects (n = 18) prior to (0 m) or 1 month (1 m), 3 months (3 m), and 6 months (6 m) after cART. Age-matched healthy subjects (n = 18) were used as a control group. Cellular RNAs extracted from PBMCs were subjected to quantitative PCR for the indicated TLRs. The expression levels were shown relative to glyceraldehyde-3-phosphate dehydrogenase (GAPDH), and the significant differences from paired or unpaired t tests were shown by *p < 0.05, **p < 0.01, and ***p < 0.001.

Figure 2: IFN regulatory factor (IRF)-3/7/9 expression in PBMCs of HIV-1-infected subjects on cART. PBMCs were collected from HIV-1-infected subjects (n = 18) prior to (0 m) or 1 month (1 m), 3 months (3 m), and 6 months (6 m) after cART. Age-matched healthy subjects (n = 18) were set as a control group. Cellular RNAs extracted from PBMCs were subjected to quantitative PCR for the indicated IRFs. The expression levels were shown relative to glyceraldehyde-3-phosphate dehydrogenase (GAPDH), and the significant differences from paired or unpaired t tests were shown by *p < 0.05, **p < 0.01, and ***p < 0.001. 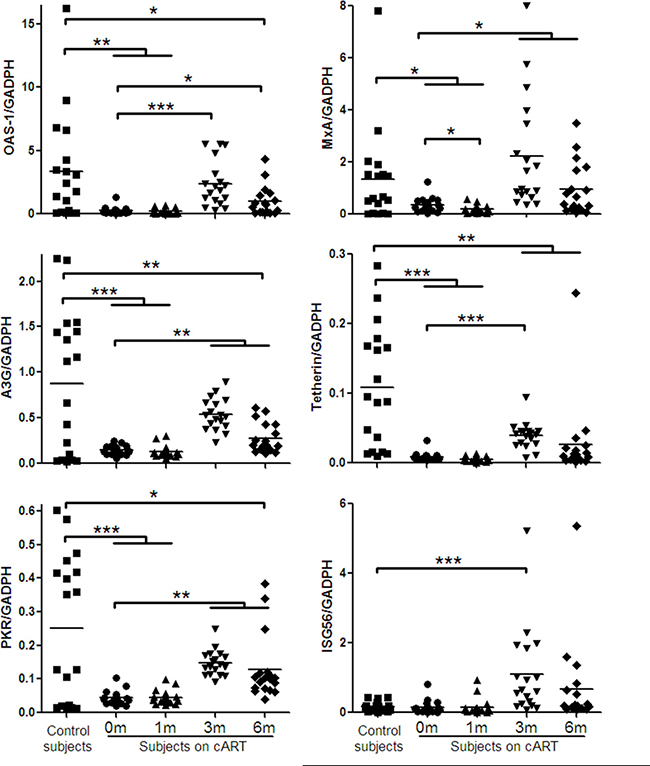 Figure 3: Cellular anti-HIV-1 factors expression in PBMCs of HIV-1-infected subjects on cART. PBMCs were collected from HIV-1-infected subjects (n = 18) prior to (0 m) or 1 month (1 m), 3 months (3 m), and 6 months (6 m) after cART. Age-matched healthy subjects (n = 18) were used as a control group. Cellular RNAs extracted from PBMCs were subjected to quantitative PCR for anti-HIV-1 factors (OAS-1, MxA, A3G, Tetherin, PKR, ISG56). The expression levels were shown relative to glyceraldehyde-3-phosphate dehydrogenase (GAPDH), and the significant differences from paired or unpaired t tests were shown by *p < 0.05, **p < 0.01, and ***p < 0.001. 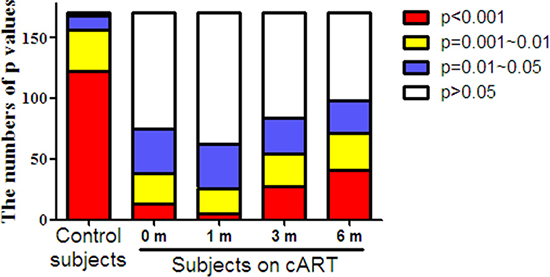 The association to CD4+ T cells counts or HIV-1 loads 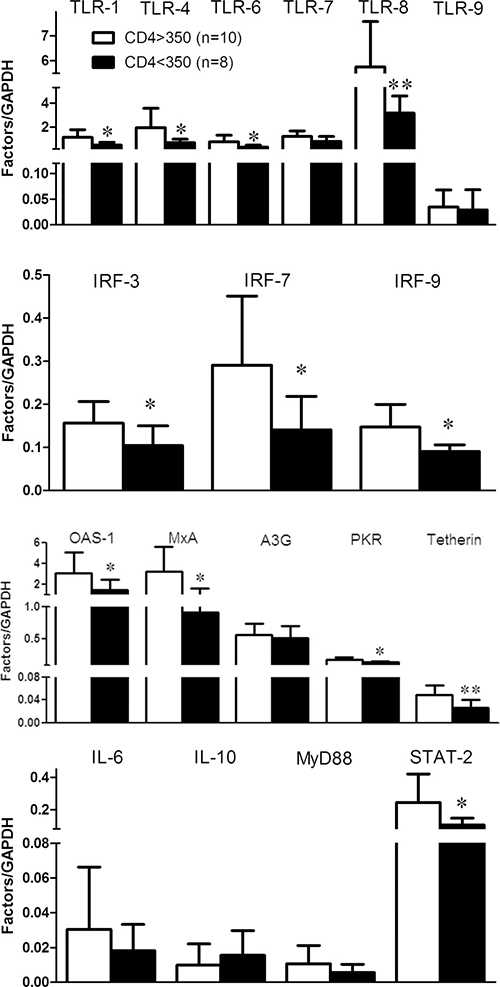 Figure 5: The response to cART for the factors in JAK-STAT pathway in PBMCs of HIV-1-infected subjects. PBMCs were collected from two groups of HIV-1-infected subjects: CD4 > 350 cells/μL (n = 10) and CD4 < 350 cells/μL (n = 8) prior to cART. After three months’ cART, cellular RNAs extracted from PBMCs were subjected to quantitative PCR for the factors in JAK-STAT pathway. Error bars represent SD, with significance from t test shown by *p < 0.05 and **p < 0.01.

In the present study, we examined the in vivo impact of HIV-1 infection on JAK-STAT signaling pathway-mediated anti-HIV-1 immunity. JAK-STAT signaling pathway has been implicated in TLR-mediated pathogen recognition, IRFs activation [26], the induction of IFN-inducible genes such as MxA and ISG56 [12, 22]. We found that HIV-1-infected subjects had lower levels of the TLRs, IRFs and the cellular anti-HIV factors (Figures 1, 2, 3). These findings indicate that HIV-1-infected subjects had a compromised JAK-STAT-mediated antiviral immunity. Interestingly, cART could only restore some of the HIV-1 restriction factors (Figure 3). We further analyzed the correlations between each two factors in JAK-STAT pathway, including adaptor molecular such as MyD88 and STAT-2. As shown in Figure 4 and Supplementary Table 1, significantly positive correlations were found in most factors in the control subjects, but only less than half of factors in HIV-1-infected subjects, and stably increased with the cART. These data were in agreement with the expression of TLRs, IRFs, and anti-HIV-1 factors in JAK-STAT pathway, indicating that cART can restore the impaired JAK-STAT pathway in PBMCs of HIV-1-infected subjects. While the mechanism(s) involved in HIV-1 infection-mediated impairment of JAK-STAT pathway remain to be determined, it has been shown that Vpr and Vif, two HIV-1 accessory proteins could bind to TANK-binding kinase 1 (TBK1) and inhibit TBK1 autophosphorylation [27], which is a key step in the activation of IFN and NF-κB signaling pathways. Also, HIV-1 Vpu accessory protein is known to induce IRF3 cleavage [28]. The HIV-1-infected subjects with high CD4+ T cells count (> 350/μl) appeared to respond better to cART in terms of the restoration of some of the antiviral factors in JAK-STAT pathway. These findings are clinically significant as they indicate that cART is beneficial for HIV-1-infected subjects who have CD4+ T cell counts > 350/μl than those with the counts < 350/μl. However, further studies with more clinical specimens are needed in order to determine clinical beneficial of early cART in the restriction of host innate immunity against HIV-1.

Eighteen HIV-1-infected subjects (17 males and one female) and 18 age-matched healthy donors (16 males and two females) were enrolled if they aged 18 or over and volunteered with written informed consent. The study was approved by the Ethics Committee of Wuhan Centers for Disease Prevention & Control. All HIV-1-infected subjects were examined by medical screening, and voluntarily received cART. The treatment regimen and algorithm TDF+3TC+EFV (17 patients) or AZT+3TC+NVP (1 patient) were carried out according to the China free cART manual [29], in which the threshold for cART eligibility was recommend as CD4+ T cells < 350/μL [30] and suggested therapy regimen was AZT/d4T+3TC+NVP/EFV.

For HIV-1-infected subjects, whole blood was collected prior to cART (0 month), 1 month, 3 months, and 6 months after cART. Estimation of absolute CD4+ T cell counts and plasma HIV-1 loads were tested as described previously [31]. Whole blood (10 mL) of HIV-1-infected subjects and healthy donors were subjected for the separation of PBMCs by standard Ficoll-Paque density gradient centrifugation, according to previously described technique [32, 33]. Total cellular nucleic acid was extracted from PBMCs using the TRI Reagent (Molecular Research Center, Clicinnati, OH) according to the manufacturer’s protocol, and stored at –70°C for RT-PCR analysis.

Total RNA (1 μg) was reverse transcribed using the RT system (Promega, Madison, WI) for 1 h at 42°C. 1.5 μL cDNA was subjected as a template for real-time PCR quantification. Using the power SYBR® Green PCR Master Mix (Life Technologies, California), messenger RNAs (mRNAs) in PBMCs were detected. The level of glyceraldehydes-3-phosphate dehydrogenase (GAPDH) mRNA was used as an endogenous reference to normalize the quantities of target mRNA. The primers used for the detection of the mRNAs (Table 2) were designed as previously described [12, 22]. The PCR results were analyzed by the 2-ΔΔCT methods [34].

This study was supported by Open Research Fund Program of the State Key Laboratory of Virology of China (No. 2014KF002, to MQL), National Natural Science Foundation of China (No. 81001303 to MQL), and the National Institutes of Health grants (No. DA022177 to WZH).

20. Randall RE, Goodbourn S. Interferons and viruses: an interplay between induction, signalling, antiviral responses and virus countermeasures. The Journal of general virology. 2008; 89:1–47.