Bladder cancer is one of the most common urothelial tumors worldwide. While there are some progresses on early bladder cancer detection, patients’ mortalities have not been changed significantly. So it is important to get further understanding the mechanism involved in the development and progression of bladder cancer. Long non-coding RNAs play important regulatory roles in a variety of biological processes ranging from gene regulation, cellular differentiation to tumorigenesis. Previous literatures reported that lncRNA ABHD11 Antisense RNA 1 (ABHD11-AS1) (Organism: Homo sapiens) was highly expressed in gastric cancer. Inspired by these observations, we hypothesized that ABHD11-AS1 possibly plays an analogous role in human bladder cancer. We first found that ABHD11-AS1 was up-regulated in bladder cancer tissues and cell lines, and ABHD11-AS1 expression level was positively associated with clinicobiological features. Cell proliferation, cell migration and apoptosis were observed by silencing ABHD11-AS1 and overexpression ABHD11-AS1 caused contrary effects. Taken together, these data suggested that ABHD11-AS1 may be an oncogene and a therapeutic target in bladder cancer.

Malignant bladder carcinomas are the most common tumors in urinary systems. Although the diagnosis and treatment of bladder cancer has been much improved during recent years [1–5], there are still many questions to be solved. Moreover, the ratios of recurrence, metastasis and death still remain high, which cause heavy burden to the society [6]. Therefore, in order to explore new therapeutic targets for bladder cancer patients who are not sensitive to current treatments, further studies on bladder cancer development are needed [7, 8]. Long non-coding RNAs (lncRNAs) belong to a kind of non-coding RNAs which had been regarded as useless molecules in the past. They do not contain open-reading frames, but have conservative secondary structures. LncRNAs interacted with DNA, RNA or proteins as molecular sponges, scaffolds and activators to play important regulatory roles in a variety of biological processes. We supposed that ABHD11-AS1 should affect apoptosis through a similar way. LncRNAs mainly regulated and controlled gene transcription, cell differentiation, epigenetic and other life activities [9–23]. For example, PVT1 was reported to be highly expressed and to control cellular behaviors in bladder cancer by our group [24]. In summary, lncRNAs function as oncogenes or tumor suppressors in human tumor diseases, which promote cancer or suppress tumors [25–38]. But many studies on lncRNAs were still in the primary stage, there’s a long way to transform them into application in clinical diagnosis and treatment.

Alpha/beta hydrolase domain (ABHD)-containing proteins are structurally related with diverse catalytic activities. In various species, some ABHD proteins have been characterized and shown to play roles in lipid homeostasis. AT4G10030AtABHD11 is a lyso (phospho) lipase. The disruption of AtABHD11 caused the accumulation of the polar lipids in leaves, which in turn promoted a higher growth rate compared to wild-type plants [39, 40]. ABHD11 and Esterase D can be used to predict the development of distant metastases of aggressive lung adenocarcinomas [41]. The abnormally upregulation of ABHD11 Antisense RNA 1 (ABHD11-AS1) (Organism: Homo sapiens) has important clinical significances in gastric cancer [42, 43]. Abhd11os(Organism:Mus musculus, called ABHD11-AS1 in human) may play crucial roles in neurodegenerative diseases [44]. These studies suggested that the lncRNA ABHD11-AS1 perhaps involved in other diseases, such as bladder cancer. 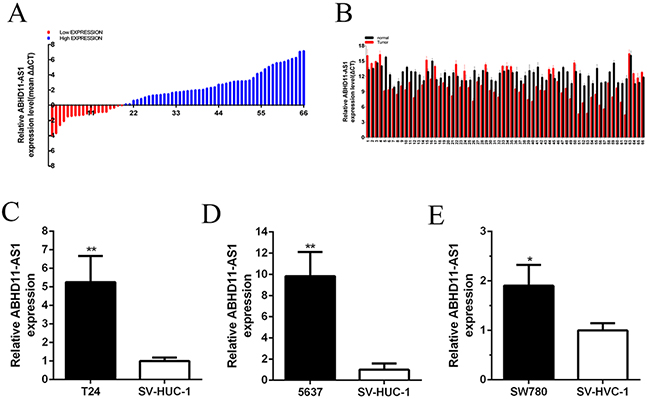 TNM according to the seventh edition of staging TNM of Union Internationale Contre Le Cancer (UICC) in 2009. 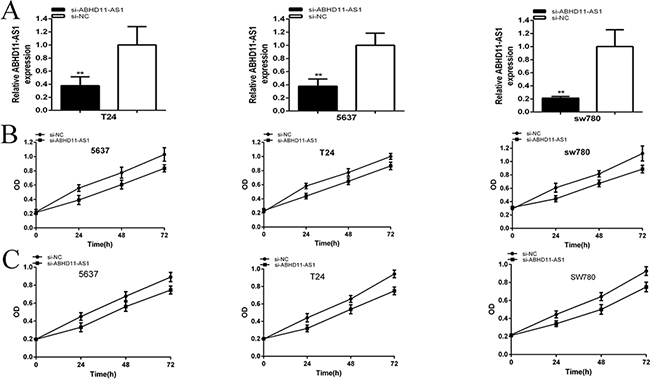 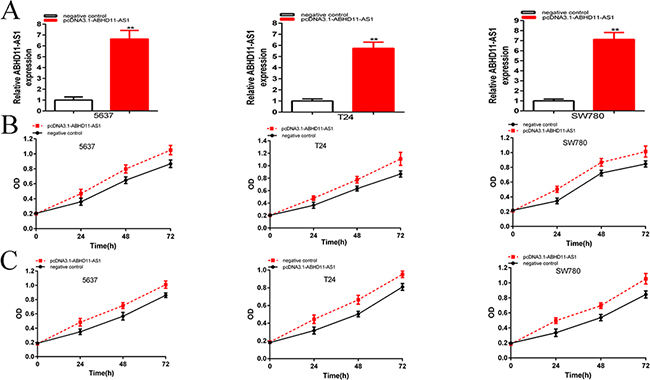 Figure 4: EDU was used to detect cell proliferation after transfection specific RNA A. and C. and specific plasmids B. and D. Assays were performed in triplicate. Data are illustrated as mean ± SD (*p < 0.05, **p < 0.01). 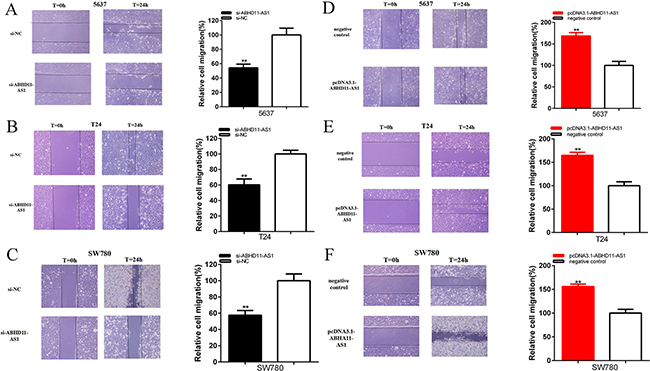 These results indicate that ABHD11-AS1 may reduce apoptosis in bladder cancer cells. Assays were performed in triplicate.

Intermittent painless gross hematuria is one of the most common clinical symptoms in bladder cancer. Bladder malignant tumors could be divided into urothelial carcinoma, adenocarcinoma, squamous cell carcinoma, anaplastic carcinoma and other types in bladder tumors. The optimal surgical treatment mainly based on clinical pathology and clinical stage of bladder tumors. The transurethral resection of bladder tumor (TURBT) supplemented by postoperative bladder perfusion chemotherapy is the best therapeutic regimen for the non-muscle invasive bladder cancers (NMIBC), but easily relapsed. Radical cystectomy is the major treatment for the muscle invasive bladder cancers, but the life quality was still poor [1–4]. Therefore, new molecular markers [5–8] are needed to improve the diagnosis of bladder cancer.

Non-coding RNAs research started relatively late, and was regarded as no function and ignored transcription “noise”. Lots of literatures have illustrated that various miRNAs play significant roles in the bladder cancer progression. In recent years, accumulating evidences have shown that another type of non-coding RNAs –lncRNAs- represent an emerging player in cancer. In the past decade, many studies have shown that abnormal lncRNAs expression were closely related to diseases, especially tumors, and act as oncogenes or tumor suppressors to involve in the regulation of the tumor disease’s growth and progression [30–38]. However, just a small proportion of lncRNAs have been illustrated in tumors. The dysregulation of ABHD11-AS1 in gastric cancer or nerve system have important impact on cells [42–44]. And we further studied the expression pattern and biological function of ABHD11-AS1 in bladder cancer.

In our study, this research elucidated that ABHD11-AS expression level is largely correlated with bladder cancer clinical pathologic grade and TNM phase. ABHD11-AS1 played oncogenic roles in the bladder cancer development and progression. ABHD11-AS1 may be a candidate biomarker for bladder cancer diagnosis and treatment, which could possibly change the present dilemma of the advanced bladder cancer treatment. But more efforts will be needed to find out the molecular mechanisms of ABHD11-AS1 in bladder cancer.

This research was approved by the Human Ethics Committee of Shenzhen Second People’s Hospital (Shenzhen, China) and The Fourth Affiliated Hospital of Zhejiang University School of Medicine (Yiwu, China). Written formal approval was also obtained from all the patients. Forty-sixth patients diagnosed with urothelial cancer by histopathological evaluation in the bladder were included in this study. Before biopsy, no any treatments were given to patients. Sixty-six bladder cancer tissues and matched non-tumor bladder tissues were acquired from patients and then snap-frozen in liquid nitrogen quickly.

Specific siRNA oligonucleotides targeting ABHD11-AS1, ABHD11-AS1 siRNA (si-ABHD11-AS1), and negative control siRNA (si-NC) were synthesized by GenePharma, Suzhou, China. The sequences of ABHD11-AS1 siRNA were as follows: sense: GGGAUGAAGCCAUUGCUAATT and antisense: UUAGCAAUGG CUUCAUCCCTT. Bladder cancer cells were cultured in 6-well plates to get 30% confluence and then transfected with siRNAs using Lipofectamine 2000 (Invitrogen) according to the manufacturer’s protocol.

Cell proliferation was measured using Cell Counting Kit-8, CCK-8 (Beyotime Institute of Biotechnology, Shanghai, China) according to the manufacturer’s instructions. 5×103 cells per well were seeded in 96-well plates for 24 hours to get 30-50% confluence, and then transfected with siRNAs or plasmids. Assays were performed in triplicate.

The proliferation of the bladder cancer cells was also determined by using 3-[4, 5-dimethylthiazol-2-yl]-2, 5-diphenyl-tetrazolium bromide (MTT) assay. Cells were grown in a 96-well plate for 24 hours, transfected with siRNAs or plasmids and cultured in normal medium. Cells were incubated in 0.1 mg/ml MTT for 4 hours and lysed in dimethyl sulfoxide (DMSO) at room temperature for 10 minutes. The absorbance in each well was calculated by using a microplate reader (Bio-Rad, Hercules, and CA). Assays were performed in triplicate.

5-ethynyl-20-deoxyuridine (EdU) assay kit (Ribobio, Guangzhou, China), respectively, were used to measure cell proliferation according to the manufacturer’s instructions. EdU incorporation assay was carried out according to previous studies [45, 46]. The experiments were performed in triplicate.

Cell migration was observed by scratch assay following the reported methods [47]. Cells were seeded in 6-well plates and incubated in incubator to get 100% confluence before transfection. The cells were transfected with siRNAs or plasmids. A sterile 200 µl pipette tip was used to generate a clear line in the wells. Pictures were taken from each well quickly using a digital camera system. After one day, pictures were taken again. Migration distance was counted at the time of 0 h and 24 h. Experiments were carried out at least three times.

Bladder cancer T24, 5637 and sw780 cells were transfected with siRNAs or plasmids in 12-well plates. After 48 hours, the activity of caspase-3 was measured by the caspase-3 enzyme-linked immunesorbent assay (ELISA) assay kit (Hcusabio, Wuhan, China) according to the manufacturer’s instructions [45, 46]. Each test was performed at least three times.

Bladder cancer T24, 5637 cells and SW780 were transfected with siRNAs or plasmids in 12-well plate. After 48 hours, the Hoechst 33258 staining kit (Life, Eugene, OR, USA) was employed to observe the apoptotic cells induced by siRNAs or plasmids [45, 46]. Assays were performed in triplicate.

Cells were cultivated in 6-well plates before transfection. Cells were transfected with siRNAs or plasmids. 2 days after transfection, cells were harvested and double stained with FITC-Annexin V and PI using the FITC Annexin V Apoptosis Detection Kit (TransGen, Perking, China) according to manufacturers’ protocol [45, 46]. Flow cytometry (EPICS, XL-4, Beckman, CA, USA) was used to detect cell apoptosis. In the pictures, cells were classified into dead cells, early apoptosis cells, living cells and late apoptotic cells. The ration of early apoptotic cells was considered as an observation index between negative control and experimental group. Each experiment was carried out in triplicate.

The authors are appreciative to the donors, whose names were not included in the author list, but who participated in this program. This work was funded by the National Key Basic Research Program of China (973 Program) (2014CB745201) and the Fourth Affiliated Hospital of Zhejiang University School of Medicine financial support.