Background: Both surgical TNM (sTNM) and pathological TNM (pTNM) staging are important clinicopathologic indexes of gastric cancer (GC). However, surgeons and pathologists might assess tumor depth differently in the same patient. To investigate the prognostic significance of sTNM status in patients with radically resected stage pT3-pT4b GC, we examined the relationship between sTNM and pTNM.

Methods: Clinicopathologic and survival data of 1289 patients with stage pT3-pT4b GC were studied retrospectively, in the aftermath of radical surgery.

Conclusions: Surgical T stage is a significant and independent prognostic index of overall survival (OS) in patients with radically resected advanced GC. Patients in the pT3/4a stage with sT4b cancers, are potentially underestimated, and should be considered higher stage in terms of prognostic.

Gastric cancer (GC) is a disease with one of the poorest prognoses, and remains the second leading cause of cancer deaths worldwide [1-4]. It is commonly accepted that accurate/optimal staging of primary tumor invasion (pT stage) and regional lymph nodal metastasis (pN stage) is critical for assessing prognosis and decision-making proper adjuvant therapy after curative resection [5-8]. Nonetheless, they are always insufficient for predicting prognosis [9, 10]. Recently, in order to find more suitable prognostic index, many scholars had done a lot and some changes had been done to the pN stage than the pT stage [11-16].

In our previous study, there is another staging system called surgical TNM (sTNM), which is applied to stage and assess in colon and rectum cancer, and it potentially influences patient auxiliary treatment decisions [17]. The sTNM staging is also based on the primary tumors, regional lymph nodes, and metastasis but is defined by surgeons according to the intraoperative findings [18-20]. However, few studies have investigated the prognostic significance of sTNM in gastric cancer. Based on our extensive clinical experience, assessment differences were frequently exhibited between sTNM (macroscopic view) and pathological TNM (pTNM) (microscopic view) staging, especially for patients at T4b stage.

In light of these considerations, the aim of the present study was to investigate prognosis of T3-T4b stage GC patients with inconsistent assessments of tumor invaion between surgical and pathological staging. We also evaluated to integrate the surgical T (sT) stage with pathological T (pT) stage in terms of survival.

All patients with gastric cancer who underwent surgery at the Department of Oncology, First Affiliated Hospital of China Medical University from January 1985 to December 2010 were entered into a prospectively maintained database. A total of 1352 patients without distant metastasis or positive peritoneal cytology who underwent curative (R0) surgery (with D2/D3 lymphadenectomy) for primary GC, histologically proven and ultimately were confirmed as stage pT3-pT4b. Of these, 35 died in the postoperative period and were excluded. Follow-up of the entire study population was conducted until cancer related death or the cutoff date (December 31, 2011), by means of outpatient clinic consultation, and/or communication with patients through telephone or letter. Median and mean follow-up period were 29 and 48.55 months (range 1-312 months), respectively. At the time of the last follow-up, 28 were lost and were also excluded, leaving a total of 1289 patients for study enrollment. None received neoadjuvant chemotherapy.

The tumor of each gastric cancer was completely examined, furthermore the final macroscopic depth of invasion was confirmed by all of the surgeons present after tumor exploration. Subsequently the pathologists evaluated the postoperative tumor staging, named pT staging. Macroscopic assessment of tumor depth by surgeons during the operation named sT staging was performed as follows: sT3 lesions were diagnosed when tumor invaded subserosal connective tissue, did not invaded through the serosa; sT4a lesions when serosal involvement were visible and sT4b lesions were tumor invaded the adjacent structures. sT staging was prospectively determined by three surgeons, immediately after the abdominal cavity being opened. Disagreement
about the diagnosis was resolved unanimously after discussion with all three surgeons present.

The study was approved by the Research Ethics Committee of China Medical University. Written informed consent was obtained from all patients prior to participation in this study.

As shown in Figure 1, prognosis differed significantly among patients of GC in stage pT3-pT4b and sT3-sT4b (each, p = 0.000). Comparison 5-year OS in every group of pT stage and sT stage respectively, we found that 5-year OS of patients differed significantly among various pT stages, but not in sT stage (Figure 1B). Subsequently, 5-year OS of various sT stages were compared by pT stage. For pT3 or pT4a stage, there were significant prognostic differences between sT3 and sT4b stage, as well as sT4a and sT4b stage, but not in sT3 and sT4a stage (Figure 2).

Table 2: Comparison of prognosis among patients which were divided into 7 groups by pT and sT stage.

a: Step 1, with consideration of all significantly important prognostic factors in univariate analysis, except for the revised pT stage

b: Step 2, with consideration of all significantly important prognostic factors in univariate analysis, including the revised pT stage 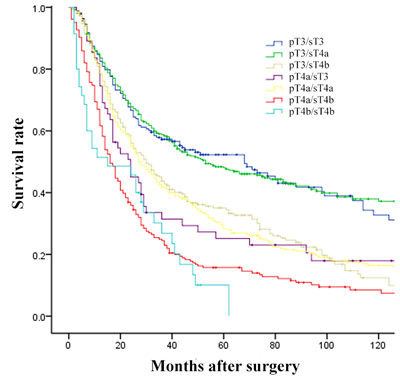 Figure 3: Comparison of survival curves among patients which were divided into 7 groups by pT and sT stage. 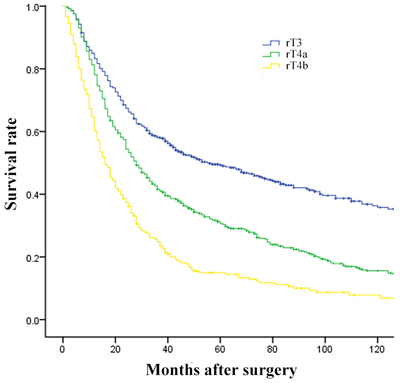 Figure 4: Comparison of survival curves among patients according to the revised T stage (p = 0.000).

In the present study of GC patients in T3-T4b stage, comparison 5-year OS in every group of pT stage and sT stage respectively, we found that survival of patients differed significantly among various pT stage, and also in sT stage. In the next step, 1289 patients were divided into 7 groups by pT and sT stage. Our data revealed that there were no significant prognostic differences between pT4a/sT3-4a and pT3/sT4b, as well as pT4a/sT4b and pT4b/sT4b. Based on these results, we therefore formulated our r-pT staging, where pT3/sT4b and pT4a/sT4b stages GC were incorporated as stage pT4a and pT4b disease, respectively. In this setting, univariate analysis revealed that both sT and pT were important independent prognostic factors. Two-step multivariate analysis confirmed that r-pT stage surpassed both UICC/AJCC pT stage and sT stage as a critical prognostic factor in the prognostic hierarchy.

Our previous study explained some possible reasons of uncomformity between pT stage and sT stage [19, 21]. Major present study additions to this line of investigation were as follows: (1) our study focused on stage T3-T4b GC, because it was difficult to perform accurate assessment of stage T1-T2 GC during the operation; (2) patients were divided into 7 subgroups by pT and sT stage, furthermore were grouped into 3 groups in terms of prognosis; (3) we proposed the revised T stage, importantly integrated macroscopic tumor invasion into TNM stage.

Although primary tumor invasion is significantly and independently predictive of 5-year OS in GC patients, UICC/AJCC pT stage remains always insufficient for predicting prognosis, and recently many scholars have reported that some novel T stages based on several indexes was more suitable in predicting survival [10, 14, 22, 23]. According to numerous previous studies and our practice, the unconformity for assessing tumor invasion depth were frequently exhibited between sT and pT staging [21]. Our finding revealed that there were 835 patients with inconsistent depth of invasion in this setting, therein 436 patients were T4b stage. Pathologists and surgeons have respective difficulty in determining whether tumor invaded the adjacent structures or not. It may be the cause that pathologists and surgeons lack for enough intraoperative finding and sufficient histologic proof during operation, respectively.

The integration of sT and pT staging has distinct advantages and alluring prospects in clinical application [17]. Macroscopic T stage is easily assigned by surgeons, based on gross serosal appearances during open laparotomy, providing a simple and effective method to assess patient prognosis [14, 24]. Likewise, microscopic T stage is routinely reported by pathologists after operation. We may use the macroscopic and microscopic integration to infer the most accurate depth of primary tumor infiltration, thus avoiding a migration in postoperative pT stage. In consideration of the prognostic value of macroscopic and microscopic integration in our hands, we think that its status is critical in deciding whether and how intraoperative and postoperative adjuvant therapy is administered. Thus, further studies are needed to test this premise.

Several limitations of this investigation are acknowledged. The surgical T stage mainly depends on gross macroscopic observations, which may partially vary by individual. Also, This retrospective study (n = 1289) was confined to a single Chinese institution. Larger international multicenter samplings should be analyzed to confirm our findings.

In conclusion, our data demonstrate that both surgical T stage and pathological T stage are independent factors for predicting prognosis in patients with radically resected stage pT3-pT4b GC. Importantly, their integration could be applied to more accurately predict the patient prognosis.

7. Hayashi T, Yoshikawa T, Bonam K, Sue-Ling HM, Taguri M, Morita S, Tsuburaya A, Hayden JD, Grabsch HI. The superiority of the seventh edition of the TNM classification depends on the overall survival of the patient cohort: comparative analysis of the sixth and seventh TNM editions in patients with gastric cancer from Japan and the United Kingdom. Cancer. 2013; 119:1330-7.