The tumor-node-metastasis (TNM) system has been widely used to stage tumors, predict prognosis and develop a therapeutic strategy. Recently, it has also been hypothesized that different tumor locations may be associated with varying clinical presentations and outcomes. Pioneering studies of colon cancer have demonstrated that right- and left-sided tumors exhibit different genetic, biological and demographic characteristics and risk factors [1].

With regard to the pancreas, tumor localization to the head has been found to be independently associated with local invasiveness and recurrence in pancreatic serous cystic neoplasms and intraductal papillary mucinous neoplasms [2, 3]. Branch duct intraductal papillary mucinous neoplasms typically arise in the head of the pancreas, while mucinous cystic neoplasms are common in the body or tail [4]. Furthermore, insulin-positive endocrine cells, which are present at a greater concentration in the tail of the pancreas compared with the head, could serve as a cell-of-origin of pancreatic ductal adenocarcinoma (PDAC) following oncogenic mutation inducement and pancreatic injury [5]. These findings indicate that the head, body, and tail of the pancreas may have different malignant potentials. In our recent review, we have concluded that pancreatic head cancer has a higher incidence, is easier to detect and has a better prognosis compared with pancreatic body/tail cancer [6]. However, early-stage tumors in the pancreas head may be associated with lower survival compared with those in the pancreas body/tail [6].

MicroRNAs (miRNAs) play powerful functional roles in controlling important cellular processes. Comparing with other potential biomarkers, miRNA can be found stabilized in body fluids and tissue samples, which makes it one of the most promising ways for earlier detection of cancer. Previous studies have identified the deregulation of a set of miRNAs in association with carcinogenesis in PDAC [7]. In the present study, we aimed to identify the prognostic relevance of primary tumor location in patients undergoing resection for PDAC, and to elucidate the epigenetic diversity between the two subtypes of PDAC by a comparison of miRNA expression profiles.

Tumor location is associated with tumor recurrence and patient survival 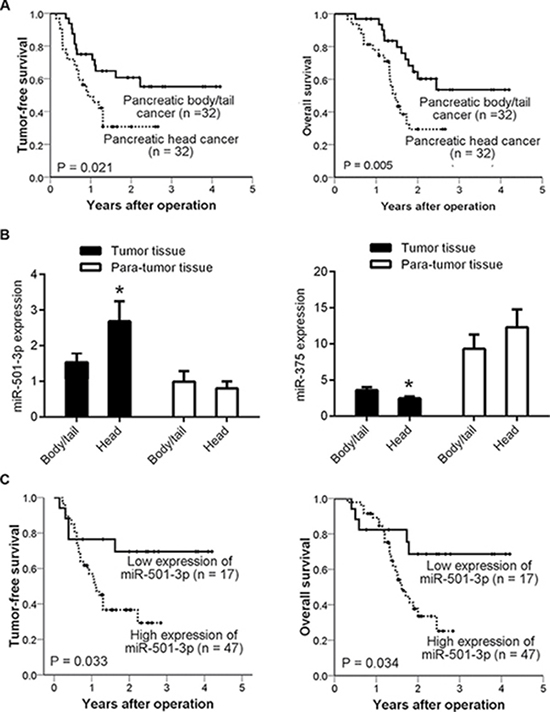 A miRNA microarray platform was used to compare miRNA profiles between randomly selected 4 pairs of strictly matched tumor tissues. The majority of miRNAs, including those associated with PDAC [7] (Supplementary Table 1), were not significantly differentially expressed between these two subtypes of PDAC. Of note, we found that 6 miRNAs were significantly differentially expressed (P < 0.05). Taking the fold-changes and rank sum differences into consideration, miR-501-3p was the only candidate for further study with a P < 0.05, a fold-change of > 2 and the largest rank sum difference. We also further assessed miR-375 because it has been reported to be a potent tumor suppressor in PDAC [8]. All 32 paired tumor tissues were used for subsequent validation. We verified the lower expression of miR-501-3p and higher expression of miR-375 in the pancreatic body/tail cancer tissues compared with the pancreatic head cancer tissues (Figure 1B). 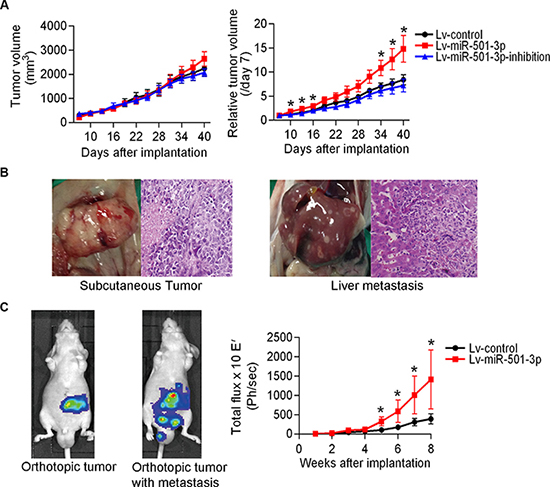 In addition, the expression of miR-501-3p in tumor tissues was evaluated to confirm the efficiency of lentivirus infection (Supplementary Figure 1). The proliferation and invasion capabilities of Panc-1 cells infected with lentivirus were also assessed and were shown to be consistent with those of Panc-1 cells transfected with miRNA mimics and inhibitors (Supplementary Figure 2).

To reveal the underlying mechanism of miR-501-3p-induced invasion, an antibody microarray was used to analyze differential protein expression between Panc-1 cells transfected with either miR-501-3p mimics or its control (Supplementary Table 4). But the significantly different expressed proteins were not predicted to be direct potential targets of miR-501-3p using open-source software. Yet, E-cadherin as a well-studied one involved in cancer invasion has an interaction network with miR-501-3p (Supplementary Figure 3), and thus was chosen for further experiments. The high and low E-cadherin-expressing cell lines (Colo357 and Panc-1, respectively) were used (Supplementary Figure 4). We found reduced E-cadherin protein expression in the mimics group and its increased expression in the inhibitors group compared with their respective controls in both cell lines (Figure 4A). Furthermore, we manipulated the E-cadherin expression and found the enforced expression of E-cadherin could rescue the miR-501-3p effects in Panc-1 cells (Figure 4B). 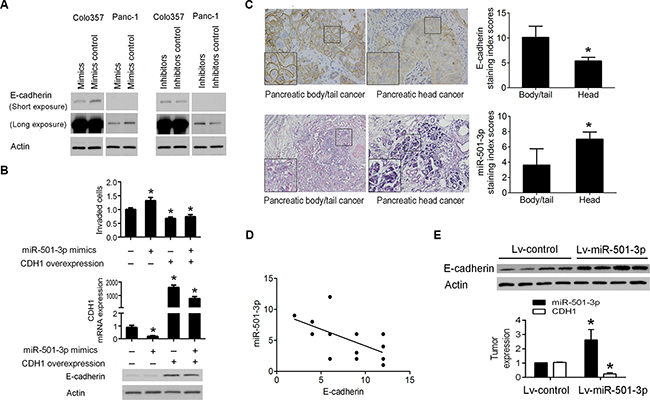 Using immunohistochemistry analysis, we found significantly high and low expressed E-cadherin and miR-501-3p, respectively, in pancreatic body/tail cancers than pancreatic head cancers (Figure 4C). There was a significant negative correlation between the expression of E-cadherin and miR-501-3p (r = –0.596, P = 0.015, Figure 4D). In the orthotopic PDAC model, Lv-miR-501-3p group presented higher expression of E-cadherin in the tumor tissue than the Lv-control group (Figure 4E).

Because both pancreatic head and body/tail cancers are essentially PDAC, it is not surprising that the expression levels of the majority of miRNAs were similar between these two subtypes. However, two miRNAs (miR-501-3p and miR-375) were significantly differentially expressed between the two subtypes. Studies have demonstrated a down-regulation of miR-375 in PDAC [7]. It can act as a tumor suppressor and targets several oncogenes, including PDK1 and JAK2, resulting in decreases in cancer cell growth, viability and invasiveness [10, 11]. Unlike miR-375, miR-501-3p has not yet been well studied in human cancers. Previous study showed an overexpression of miR-501-3p in non-functioning pituitary adenomas [12], malignant melanoma [13], compared with normal tissues. A clinically relevant study found that serum miR-501-3p was elevated in patients with early stage PDAC compared with those with chronic pancreatitis or normal controls [14]. Our results demonstrated that miR-501-3p promoted PDAC recurrence after surgery. It indicates that miR-501-3p might be a potential biomarker for PDAC carcinogenesis or tumor development [14]. In addition, from the clinical characteristics analysis, we found that high miR-501-3p expression maybe linked with poor tumor differentiation but not lymphatic metastasis. We suggest that pancreatic body/tail cancer maybe characterized by the lower expression of miR-501-3p, which contributes to a lower recurrence risk, compared with pancreatic head cancer.

Both the in vitro and in vivo studies confirmed this hypothesis. Furthermore, miR-501-3p possibly promoted cancer invasion via down-regulating E-cadherin, which is well known as a transmembrane protein localized to the adherence junctions of the epithelial cell basolateral surface that plays a key role in epithelial morphology maintenance. The loss of E-cadherin expression is a well-recognized marker of EMT, and it promotes PDAC progression, invasion and metastasis [15]. Taken together, our results indicate that the lower expression of miR-501-3p in pancreatic body/tail cancer might be associated with the higher expression of E-cadherin, and subsequently, a less invasive/metastasis phenotype compared with pancreatic head cancer.

A limitation of this clinical study is the relatively small cohort assessed. Nevertheless, considering the relatively low incidence of pancreatic body/tail cancer and more importantly, the difficulty in strictly matching between the two groups, this study should have value. On the other hand, since stringent selection criteria were applied in the initial screening step, a selection bias cannot be ruled out. Another possible limitation is ethnic in nature. Our results should be verified in Western cohorts.

In summary, this study is the first to compare pancreatic head and body/tail cancers using strictly matched early stage PDAC tissue samples, and show the prognostic significance of tumor location in PDAC. We also demonstrated that miR-501-3p promotes the invasiveness of PDAC cells, possibly via regulating the expression of E-cadherin. These findings confirm the importance of subsite division and support the development of precision medicine.

Human PDAC cell lines (Capan-1, Capan-2, Panc-1, PancTu-1, Panc89, BxPc-3 and Colo357) and culture condition had been described previously [17]. MiR-501-3p mimics, inhibitors or their negative controls were purchased from Life Technologies, Darmstadt, Germany in order to positively or negatively influence the respective miRNA level. Plasmids were synthesized by GenePharma, Shanghai, China. Transfection was performed according to the manufacturer’s protocol [16].

A Signaling Explorer Antibody Array (SET100) was purchased from Full Moon Biosystems, Inc. (Sunnyvale, CA, USA) and processed according to the suggested protocol. Briefly, proteins were labeled with Biotin/DMF and placed on preblocked microarray slides. After washing, proteins were detected using Cy3-conjugated streptavidin. Data were captured using a ScanArray Gx scanner (GenePix 4000B, Axon Instruments, Foster city, Calif., USA) and GenePix Pro 6.0 software (Axon Instruments). The expression of each protein contained in the array was normalized to that of β-actin and GAPDH, respectively. Different expressed proteins were selected by > 2.0-fold variations between two samples.

Double-stranded oligonucleotides corresponding to the wild-type (WT-3′-UTR) or mutant (MUT-3'-UTR) miR-501-3p binding sites in the 3′-UTRs of the potential target genes were synthesized (GenePharma, Shanghai, China) and ligated into apsiCHECKTM-2 Vector (Promega, Madison, WI, USA). The detailed procedure has been described previously [19].

Immunohistochemistry and miRNA in situ hybridization

Immunohistochemistry was performed and scored as we described previously [20]. Tissue sections were deparaffinized, rehydrated, and then treated with 40 μg/ml proteinase K for 20 min at 37°C, fixed with 4% formaldehyde in PBS, rinsed twice in 0.13 M 1-methylimidazole and refixed with 1-ethyl-3-(3-dimethylaminopropyl) carbodiimide. Slides were prehybridized in a hybridization oven for 30 min in hybridization buffer with 500 μg/ml yeast tRNA, 50% formamide, 2 × SSC, 50 μg/ml heparin, and 0.1% Tween 20, with the pH adjusted to 6. The slides were then hybridized for 1 h with 200 nM double-digoxigenin LNA-modified probes (Exiqon, Vedbaek, Denmark) for miR-501-3p. Next, the slides were stringently washed in 2 × SSC, blocked with 2% BSA for 30 min and incubated with anti-DIG-AP at 4°C overnight. After two washes with 0.1% TBST, miRNA signals were detected with a BCIP/NBT system (Merck, Whitehouse Station, NJ, USA).

The animal use protocol was reviewed and approved by Institutional Animal Care and Use Committee of the First Affiliated Hospital, Zhejiang University and was in accordance with the Declaration of Helsinki. Four- to six-week-old male BALB/c-nu/nu mice were obtained from Charles River (Kanagawa, Japan). Hsa-miR-501-3p-recombinant lentivirus and control vectors were constructed by GeneChem Corp. (Shanghai, China). Panc-1/Luc cells were infected with lentivirus (Lv-miR-501-3p, Lv-miR-501-3p-inhibition, and Lv-control) at a multiplicity of infection of 2. Detailed information on the lentiviruses is provided in Supplemental Table 6.

A subcutaneous tumor mouse model was established by subcutaneous implantation of 1 × 107 cells into the backs of mice. TV was measured at different time points (initially at day 7) and was calculated as TV (mm3) = (length × width2)/2. RTV was calculated as TV (day n)/TV (day 7) and was used as a parameter for tumor progression. Subcutaneous tumors were also resected under aseptic conditions after growing to a certain volume. Viable tumor tissues were cut into small pieces of 1 mm3. The tumor pieces were then implanted into the mouse pancreases. Tumor growth and metastasis were monitored every week by bioluminescence imaging using an in vivo imaging system (AMI-1000; Spectral Instrument Imaging, Tucson, AZ, USA).

Statistical analyses were performed using SPSS 13.0 for Windows and SBC analysis system. A P < 0.05 was considered statistically significant. The Kolmogorov-Smirnov test was used to check for normal distribution of measurements. Quantitative variables were expressed as the mean ± SD or the median. Categorical variables were presented as values and percentages. The paired-sample t test, Wilcoxon-Mann-Whitney test, one-way ANOVA and chi-square test were used to compare quantitative and categorical variables, respectively. The Kaplan-Meier method and log-rank test were used for survival comparisons. Cox regression analysis was used to determine the risk factors for tumor recurrence after curative surgical resection. The cutoff value was determined using a ROC curve.

The authors declare that there is no conflicts of interest in this study.