The esophageal squamous cell carcinoma (ESCC) is usually develped from low-grade intraepithelial neoplasia (LGIEN) and high-grade intraepithelial neoplasia (HGIEN) to infiltrative squamous cell carcinoma [1]. Along with the progression of the disease, the squamous-cell nests of the precancerous lesions will unavoidably infiltrate into the lamina propria or even deeper sites. The infiltration of the advanced ESCC and early squamous-cell carcinoma is easily diagnosed if the teardrop-like, finger-like, or reticular infiltration is seen in the lamina propria. However, it remains hard to screen for infiltration at earlier stages, especially the differentiation between HGEIN and early infiltrative carcinoma.

According to the World Health Organization [2], ESCC arise from the hyperplasia of the neoplastic squamous epithelium, with its front end showing pushing edge, which is known as the "bulky outgrowth". The hyperplasia can further progress into teardrop- and stripe-shaped infiltration and then infiltrative carcinoma. The bulky outgrowth is traditionally regarded as a carcinoma in situ. However, it remains unclear whether the bulky outgrowth means an early infiltration due to the lack of objective criteria [3]. Thus, new diagnostic markers are required for the diagnosis of the early infiltration. In the ESCC, it lacks a specific structure as the myoepithelial layer in breast cancer or the basal cell layer in prostate cancer. Podoplanin (PDPN) protein expression is always a sensitive and specific marker to display the lymphatic endothelial cells and identify any lymphatic invasion. While some authors [4–7] have also explored the potential correlation between its expression in squamous cell carcinoma and its lymphatic metastasis, we found that D2-40 was significantly expressed in the basal layer cells in the normal squamous epithelium but not in squamous cells above the basal layer. Therefore, in our current study, we tried to investigate the possibility of regarding this specific epithelial layer as a myoepithelial layer of the breast tissue and thus using it as an objective indicator for judging the infiltration. 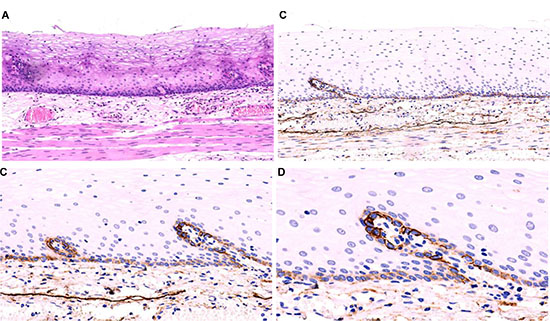 Figure 2: Low-grade intraepithelial neoplasia (LGIEN) in esophageal mucosa. The epithelial layer of the esophageal squamous mucosa is flat. Squamous cells in the basal layer of mucosa proliferate and become crowded. These cells have uniform shape and size, with thickened nuclear chromatin (A) HE staining, low-magnification). The D2-40 displayed its expression in the cellular membrane of squamous cells in IGIEN lamina propria papillae and among papillas; meanwhile, it clearly displayed the LECs in the lamina propria (B) EnVision method, low-magnification). 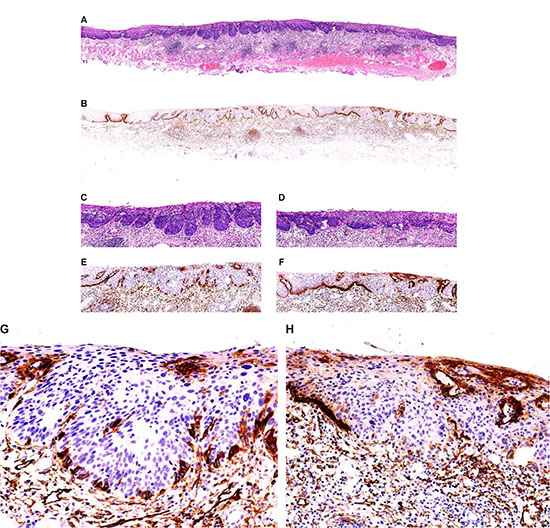 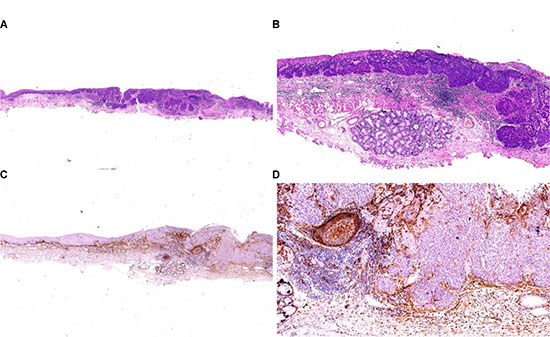 A total of 75 infiltrative ESCC nests were found. The PDPN + basal cell layer around them had completely disappeared and replaced by dysplastic cells with different PDPN expression pattern. Furthermore, the expression of PDPN protein was not detected in the basolateral cells of 61 lesions. The PDPN expression showed non-continuous type in 8 lesions. Solid and cord-shaped arrangement was detected in 6 basal cell-like ESCC nests. The expression of PDPN protein was completed detected on cellular membrane in tumor cells. Scattered PDPN expressions were occasionally detected in cytoplasm or membrane in tumor cells outside the basolateral layer of cancer nests in some cases.

In this study, we observed the changes of PDPN in the precancerous lesions of ESCC at different grades and in infiltrative ESCC.

Podoplanin (PDPN), a 38kDa mucin-type transmembrane glycoprotein, has been used as a specific marker for lymphatic endothelial cells. However, it can also be expressed in other tissues and cells such as in kidney podocytes, skeletal muscle, placenta, lung, heart, salivary glands, osteoblasts, mesothelial cells, and rat type I alveolar epithelial cells [8–11]. While its physiological functions remain unclear, PDPN may be involved in cell differentiation and development. Schacht et al found that PDPN was expressed, though in varying degrees, in the basal layer of squamous epithelium of the normal skin, cervix, and esophagus, suggesting that the basal layer cells have special immune phenotypes when compared with cells in other layers [12]. The PDPN + basal layer cells in the normal squamous epithelium may be cells in the special functional layer with specific biological and differentiation features [13].

As shown in our current study, normally D2-40 clone of PDPN was detected in the myoepithelial layer of the esophageal glands. In the cervix, it is specifically expressed in the basal layer of squamous epithelium of vagina and is partially expressed in the reserve cells in the glands and in the squamous metaplastic lesions in cervical glands. Thus, it may be a pluripotent stem cell that can be differentiated to either adenocytes or squamous cells. Thus, the PDPN positive basal cell layer, to certain degree, is similar to the cervical reserve cell layer and the mammary myoepithelial layer - both of them are functional layers with special morphologies and phenotypes that separate the epithelial and stromal layers. Naturally, we speculated that it might have a similar clinicopathological role in judging the infiltration of ESCC as it does for the infiltration of breast cancer.

In our current study, the D2-40 clone of PDPN was used to specifically display the basal layer of esophageal squamous cells. In normal conditions, the basal layer was intact, and the cellular membrane was stained at varying intensities. In patients with LGEIN, the basal layer was intact and flat in most cases but could be missing in a few cases, although no obviously atypical tumor cell was found. In patients with HGEIN, bulky growth was found in most cases in which the basal layer could be intacted, or non-continuous, or completely missed.The basal layer may be progressed from intact to non-continuous and finally completely missed. In our current study, among the linearly distributed LGEIN and HGEIN, non-complete expression types of PDPN were seen in 9 cases and 5 cases, respectively, indicating that the intraepithelial infiltration of tumor cells may predict that the invasion of some ESCC may begin from the linear growth of tumor cells.

Among the infiltrative tumor lesions, some tumor cells showed PDPN - expression while others showed PDPN + expression; even among those with PDPN + expression, basal layers with complete PDPN expression around the cancer nests was still lacking. In our series, PDPN was completing expressed in 6 lesions showing basaloid ESCC, which may be explained by the differentiation of PDPN in different cell types during tumorigenesis.

It has been speculated that the precancerous cells arises from the basal layer, which is composed of a layer of pluripotent stem cells, among which the diseased stem cells can be differentiated into PDPN + or PDPN – neoplastic cells [14]. The precancerous lesion is essentially the growth and development of neoplastic cells in the epithelial layer, during which the basal layer cells may still exist to varying degrees; in other words, the basal layer cells did not experience cancerous/invasive change and growth.

The basal layer remains intact when the low-grade tumors grow and develop in the epithelial layer; however, in patients with high-grade tumors, the atypical cancerous cells become more dominant and occupy almost the whole epithelial layer. Meanwhile, the normal basal layer cells are also occupied and destroyed and thus gradually disappear; only a small number of intrinsic basal cells remain, showing a non-continuous phenomenon. It can be regarded as a carcinoma in situ since there are still residual myoepithelial cells during the atypical ductal mammary hyperplasia. When the lesion further progresses, the tumor cells completely occupy the basal layer and the normal basal layer completely disappears. What does it mean?

In our opinion, when the esophageal HGEIN shows bulky outgrowth and the basal layer completely disappears, the tumor budding can have deep lamina propria invasion and is closer to the muscular layer of mucosa, showing an invasive growth trend. At that time the tumor cells dominate the epithelial layer and destroy the proper basal layer. This is the same case for breast cancer: after the cancerous hyperplasia of mammary ductal epithelium, its surrounding myoepithelial layer disappears; this condition should not be diagnosed as carcinoma in situ; rather, it should be judged as the earliest infiltrative carcinoma. The findings of our current study provided an objective standard for judging the conditions.

For esophageal squamous epithelium showing atypical bulky hyperplasia, whether it is an infiltrative lesion remains controversial. Similarly, another study based on electron microscopy also found that, after the atypical hyperplasia (bulky growth) of esophageal squamous epithelium, the pseudopods of many tumor cells had already broken through the basal membrane and entered the lamina propria, which was believed to be the earliest infiltration of tumor cells [15]. In our current study, the lamina propria under the bulky-growing cell nests was often accompanied by PDPN + fibroblast proliferation and lymphatic plasma cell infiltration/aggression, and other histological and cytological reactions, which were consistent with the interstitial reactive changes after early infiltration.

During the routine biopsy, it is not difficult to identify esophageal LGEIN and HGEIN based on the tissue structures and cytological findings in routine HE sections. When HGEIN occurs, the lesion shows a bulky outgrowth and approaches the muscular layer of mucosa, which makes it more difficult to make a diagnosis of HGEIN or early infiltration. Our study confirmed that displaying the basal layer with D2-40 clone of PDPN is a potential biomarker to identify the presence of any infiltration. A diagnosis of HGEIN can be made if the basal layer showed non-continuous or complete expression and a diagnosis of early infiltration can be made if the expression is completely missing (Figure 5). Thus, this technique may be used as an objective indicator of early cancer infiltration. Thus, we proposed the algorithm that reflects the change of the basal layer of PDPN + squamous epithelial cells in esophageal cancer and precancerous lesions and the diagnostic recommendations (Table 2).

Figure 5: Change of the basal layer of PDPN + squamous epithelial cells in esophageal cancer and precancerous lesions and diagnostic recommendations. Basal layer cells (brown cells) in esophageal squamous epithelium can be specifically displayed by the D2-40 as a special functional layer with the potential to differentiate into other cells. Along with the occurrence and progression of the precursor lesion (blue cells) of ESCC, the lesion showed linear hyperplasia in the basal layer (from bulky outgrowth to infiltrative growth). Accordingly, the basal layer changed from “complete” (A) to “non-continuous” (B) to “completely disappear” (C and D); the “non-continuous” and “missing” means the lesion is a high-grade intraepithelial neoplasia or even carcinoma in situ. A diagnosis of “early infiltrative carcinoma” should be made when the basal layer completely disappears. Thus, the D2-40 can effectively display the expression pattern of the basal layer and thus can be used as an objective marker of early infiltrative carcinoma. EP: epithelium; BCL: basal cell layer; MM: muscularis mucosae.

Totally 133 patients were enrolled in Department of Pathology, Beijing Friendship Hospital, Capital Medical University from October 2012 to January 2016. All subjects were pathologically diagnosed with early ESCC and/or precancerous lesions. All samples were fixed with 4% neutral formaldehyde solution for 16–48 hours and then embedded in paraffin and underwent Hematoxylin-Eosin (HE) and immunohistochemical (IHC) staining.

According to the WHO classification of tumours of the digestive system (2010 edition), these lesions were divided into LGIEN, HGIEN, and infiltrative squamous cell carcinoma.

15. Kaiyo Takubo. Pathology of the Esophagus: An Atlas and Textbook. Springer. 2008.