Esophageal cancer is the sixth leading cause of cancer-related death worldwide, and an estimated 500,000 new cases are diagnosed each year [1]. In China, esophageal cancer was the fifth most commonly diagnosed cancer and the fourth leading cause of cancer-related death in 2009 [2]. Esophageal cancer is very aggressive and is associated with a poor prognosis [3]. Esophageal cancer can be categorized as one of two histological types, adenocarcinoma and squamous cell carcinoma (SCC), each of which have distinct etiologies and specific risk factors [4]. Esophageal squamous cell carcinoma (ESCC) accounts for more than 90 percent of esophageal cancers [5] and is the major histological subtype in East Asian countries [6]. Smoking and alcohol consumption are major risk factors for ESCC [7]. The incidence of esophageal cancer has increased markedly worldwide in recent decades, and this increase can be mainly attributed to higher incidences of esophageal adenocarcinoma in North America [8, 9], Europe [10], and Japan [11]. Meanwhile, the incidence of ESCC has remained stable or declined [8, 10].

Telomerase, a reverse transcriptase that carries its own templates, maintains telomere length by synthesizing telomeric DNA repeats. Many events can result in telomere dysfunctions, including gradual shortening caused by incomplete chromosome replication, oxidative DNA damage, or mutations in structural proteins, such as TERT [12]. TERT is the reverse transcriptase catalytic subunit of telomerase, and the activation of both TERT and telomerase plays a key role in cellular immortalization and transformation [13]. In addition, multiple independent variants at the TERT locus are associated with telomere length and risk of malignant tumors [14]. TERT uses the RNA subunit of telomerase as a template for the synthesis of single-stranded DNA in the telomeric region of the chromosome, resulting in tandem nucleotide repeats that prevent shortening of the chromosome. Telomerase activity, which is elevated in most cancer cells, may block apoptosis or senescence in cancer cells [15]. Several studies have shown that TERT promotes tumor invasion and metastasis in gastric, liver, and esophageal cancer [16–18].

In this study, we conducted an extensive association analysis to evaluate the roles of TERT gene polymorphisms and haplotypes on susceptibility to esophageal cancer in a population of northwestern Chinese patients from a single case-control study. Four TERT single nucleotide polymorphisms (SNPs) were examined in this association analysis in an attempt to identify markers that might guide intervention decisions and improve patient survival.

Table 1: General characteristics the of this study population

Table 2: Frequency distributions of TERT alleles and their associations with esophageal cancer risk

TERT polymorphisms were further characterized using linkage disequilibrium (LD) and haplotype analyses. LD was determined pairwise among all four SNPs, the haplotype structure of the TERT gene was analyzed, and single LD blocks consisting of two SNPs (rs10069690 and 2242652) were detected (Figure 1). 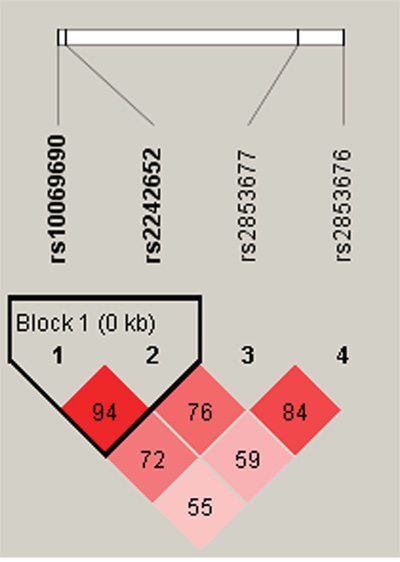 *Adjusted by gender and age.

In the present study, we systematically examined the impact of four SNPs in the TERT loci on susceptibility to esophageal cancer. We found that the rs10069690, rs2242652, and rs2853676 TERT genetic polymorphisms were associated with an increased risk of esophageal cancer in a northwestern Chinese patient population. To the best of our knowledge, this is the first case-control study to investigate this association.

As the main catalytic subunit of telomerase, TERT is essential for the maintenance of telomere DNA length in chromosomes [13]. Telomerase is an RNA-dependent DNA polymerase that synthesizes repeating TTAGGG DNA sequences, which bind many specialized proteins to the ends of the chromosome [26]. Telomeres prevent coding sequence erosion and protect chromosomes from rearrangements, fusion, and genome instability by aiding in complete chromosome replication and regulating gene expression [27]. The activation of telomerase is a vital step during cellular immortalization and malignant transformation in human cells, and many human malignancies are characterized by elevated TERT expression. TERT may therefore play an important role in cancer pathogenesis [13, 28]. The TERT gene sequence in general is thought to be indicative of an individual’s susceptibility to cancer [29–31], and epidemiological studies have identified associations between specific TERT polymorphisms and cancer development [29, 30].

Rs10069690 was originally discovered in a genome-wide association study of AAs [32], and we suspected that this SNP might also affect the risk of developing esophageal cancer. Another previous study found that the variant allele at TERT rs4246742 was inversely associated with breast cancer risk, while positive associations were found for rs10069690 (OR = 1.13), rs2242652 (OR = 1.51), and rs2853676 (OR 1.23) [33]. The rs2853676 polymorphism is also associated with an increased risk of glioma [34]. The additive ORs of the rs2853676 and rs2242652 SNPs for the risk of melanoma were 1.43 and 1.50, respectively [35]. Certain rs10069690 and rs2242652 SNP alleles are also associated with increased risk of estrogen receptor-negative cancers [14, 36]. Furthermore, recent studies have shown that rs2853677 is associated with the risk of lung adenocarcinoma in Japanese [37] and European [38] populations. Here, we found that the rs10069690, rs2242652, and rs2853676 TERT genetic polymorphisms were associated with an increased risk of esophageal cancer in a northwestern Chinese patient population; subsequent studies should be conducted to examine these associations in patients from other regions and ethnic groups.

We also identified an LD block consisting of the rs10069690 and 2242652 SNPs, both of which increased susceptibility to esophageal cancer. A previous study found that the rare Grs4246742Ars2736100Trs2853676 TERT haplotype was directly associated with telomere length [39]. Future studies should evaluate the association between the rs4246742 andrs2736100 SNPs and susceptibility to esophageal cancer.

Some limitations of the present study should be considered when interpreting the results. First, although there was sufficient statistical power for our analyses, the sample size in this study was relatively small. Second, associations between TERT polymorphisms and clinicopathological disease type were not evaluated in this study, and larger, well-designed studies are needed to confirm the associations observed here. Finally, both esophageal cancer patients and controls were enrolled at a single hospital and therefore may not be representative of the general population. Additional studies are needed to clarify the genetic mechanisms underlying esophageal carcinogenesis by fine-mapping the susceptibility regions of the variants.

In conclusion, we demonstrated that the rs10069690, rs2242652, and rs2853676 genetic polymorphisms in the TERT loci are associated with an increased risk of esophageal cancer in a northwestern Chinese patient population. Our results demonstrate the complex genetic regulation of telomere biology and the crucial role of telomerase in carcinogenesis. These results may also help improve the understanding of inter-population differences in esophageal cancer etiology, although the biological functions of these TERT SNPs need to be investigated in future studies. Finally, the esophageal cancer-associated molecular markers identified here might be useful as diagnostic and prognostic markers for esophageal cancer patient in future clinical studies.

All subjects were informed of the purpose of the study and the experimental procedures involved. The Human Research Committee of the Tangdu Hospital for Approval of Research Involving Human Subjects approved the use of human tissue in this study. We also obtained signed informed consent from all participants.

386 patients were recruited between August 2012 and July 2016 to participate in an ongoing molecular epidemiological study at the Department of Respiratory Physicians of the Tangdu Hospital affiliated with The Fourth Military Medical University in Xi’an, China. All subjects were screened by examining endoscopic staining with 1.2% iodine solution, and biopsies were taken from non-staining stained mucosal areas for each patient. Tissue sections were reviewed by two experienced pathologists to ensure that tumor cell purity was greater than 50% and to confirm histological type. None of the patients had a history of other cancers, nor did they receive chemotherapy or radiotherapy prior to this study. Patients with any comorbidity, such as diabetes mellitus, hypertension, or an endocrine disorder, were excluded. We also recruited 495 unrelated healthy individuals at random during the same period at the medical center of Tangdu Hospital to serve as controls. All study participants lived in or near Xi’an. Control group individuals had no history of known medical illness or hereditary disorders and were not taking any medications.

Departure from Hardy-Weinberg Equilibrium (HWE) was assessed for the frequency of each SNP using an exact test on the control subjects. Differences in genotype frequencies between the esophageal cancer and control groups were evaluated using the Chi-square test [42]. Microsoft Excel and the SPSS 17.0 statistical package (SPSS, Chicago, IL) were used for statistical analyses. All p-values presented in this study are two-sided; p ≤ 0.05 was considered statistically significant. Odds ratios (OR) and 95% confidence intervals (CI) were calculated using unconditional logistic regression analyses [43]. The web-based software SNP Stats was used to identify associations between SNPs and the risk of esophageal cancer in three genetic models (dominant, recessive, and additive) [44]. We used the Haploview software package (version 4.2) and the SHEsis software platform (http://www.nhgg.org/analysis/) to analyze linkage disequilibrium, haplotype construction, and genetic associations at polymorphism loci [45, 46].

This work was supported by the Science Foundation of Northwest University (Nos. 15NW19 and 338020007). We are grateful to the patients for their participation.

5. Macfarlane GJ, Boyle P. The epidemiology of oesophageal cancer in the UK and other European countries. Journal of the Royal Society of Medicine. 1994; 87:334-337.

9. Pohl H, Welch HG. The role of overdiagnosis and reclassification in the marked increase of esophageal adenocarcinoma incidence. Journal of the National Cancer Institute. 2005; 97:142-146.

19. Pohl H, Welch HG. The role of overdiagnosis and reclassification in the marked increase of esophageal adenocarcinoma incidence. Journal of the National Cancer Institute. 2005; 97:1014-1014.