*These authors should be regarded as joint first authors

Tumor cells trends to express high level of pyruvate kinase M2 (PKM2). The inhibition of PKM2 activity is needed for antioxidant response by diverting glucose flux into the pentose phosphate pathway and thus generating sufficient reducing potential. Here we report that PKM2 is succinylated at lysine 498 (K498) and succinylation increases its activity. SIRT5 binds to, desuccinylates and inhibits PKM2 activity. Increased level of reactive oxygen species (ROS) decreases both the succinylation and activity of PKM2 by increasing its binding to SIRT5. Substitution of endogenous PKM2 with a succinylation mimetic mutant K498E decreases cellular NADPH production and inhibits cell proliferation and tumor growth. Moreover, inhibition of SIRT5 suppresses tumor cell proliferation through desuccinylation of PKM2 K498. These results reveal a new mechanism of PKM2 modification, a new function of SIRT5 in response to oxidative stress which stimulates cell proliferation and tumor growth, and also a potential target for clinical cancer research.

In contrast to normal proliferating cells, tumor cells have to survive in environments with varying oxygen and nutrient supplies [1, 2]. These circumstances make special demands upon the metabolism of tumor cells [3, 4]. An important molecular feature of tumor metabolism is the expression of glycolysis enzyme pyruvate kinase isoform M2 (PKM2) [5, 6], which catalyzes the transfer of phosphate from phosphoenolpyruvate (PEP) to ADP, resulting in the formation of pyruvate and ATP. In contrast to mitochondrial respiration, energy production by pyruvate kinase is independent of oxygen and allows survival of the cells under conditions of low oxygen supply. In addition, glycolytic intermediates are necessary as precursors for the synthesis of cell components. Inhibition of PKM2 accumulates glycolytic intermediates and promotes macromolecular biosynthesis and tumor growth [7-9]. The activity of PKM2 can be regulated by several post-translational modification: phosphorylation [10], acetylation [11] and oxidation [12], all of which are very important for tumor growth.

Sirtuins are a family of protein deacetylases which catalyze the nicotinamide NAD+ dependent removal of acetyl groups from modified lysine in substrates [13, 14]. SIRT5 is a member of Sirtuins family [15], but, interestingly, SIRT5 lacks Lys deacetylase activity and its physiological function has long been obscure. Recently, Park et al. identified SIRT5 as the enzyme catalyzing Lys desuccinylation. They also identified 779 putatively succinylated proteins, including PKM2.

SIRT5 binds to and desuccinylates PKM2 at K498

Protein function is often regulated by diverse posttranslational modifications, such as phosphorylation, ubiquitination and acetylation. Recently, a systematic study of mammalian succinylome identified 2,565 succinylation sites on 779 proteins [16], including PKM2. 7 putative succinylation sites of PKM2 was identified by mass spectroscopy and among these sites, only K498 succinylation level of PKM2 increased for 2.6 fold in SIRT5 knockout mice by absolute stoichiometry [16], indicating K498 maybe the major succinylation site of PKM2. We analyzed the conservation of K498 and found that this site is highly conserved during evolution (Figure 1A). To confirm whether PKM2 is succinylated, we mutated K498 to R (K498E) and E (K498E) and found that the mutation decreased the overall succinylation level of PKM2 by 52.6% (Figure 1B). Given that the succinylation level of PKM2 increased for 2.6 fold in SIRT5 knockout mice, SIRT5 may desuccinylate PKM2 directly. We determined the binding of PKM2 to SIRT5, and found that both exogenous and endogenous PKM2 indeed binds to SIRT5 in vitro (Supplementary Figure 1A and 1C). Moreover, over expression of SIRT5 decreased the level of K498 succinylation of PKM2 (Figure 1D). To provide endogenous evidence for PKM2 succinylation at K498, we generated the K498 site-specific succinylation antibody by using a human PKM2 peptide (succinylated at K498) as an antigen. After purifying the antibody with excess unmodified peptides and enriched with succinylated peptides, we verified the specificity of the anti-K498-Suc antibody by western blot. The anti-K498-Suc antibody readily detected a band in wild-type PKM2, but no band in K498 mutants PKM2 (Figure 1B), indicating this antibody recognizes K498suc specifically. We then examined the effect of over expression or knocking down/inhibitor of SIRT5 on K498suc level by both the normal and site specific succinylation antibody. Over expression of SIRT5 significantly reduced PKM2 succinylation level at K498 (Figure 1D), while both SIRT5 inhibitor and knocking down SIRT5 increase K498suc level of PKM2 at K498 (Figure 1E and 1F), demonstrating that SIRT5 is the desuccinylase of PKM2. Taking together, these results suggest that PKM2 is indeed succinylated at K498 and SIRT5 is the desuccinylase of PKM2. 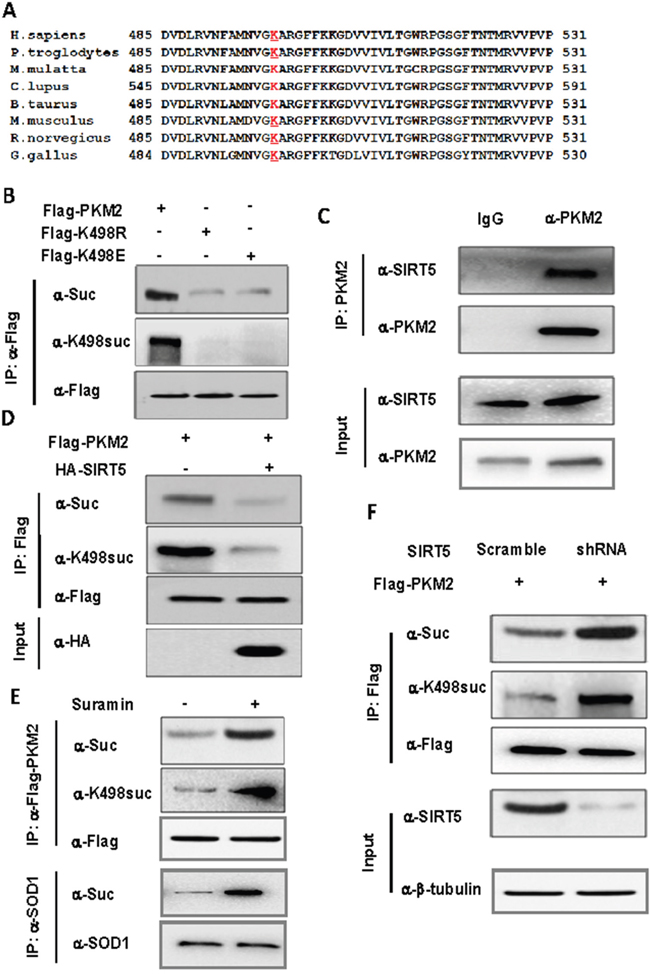 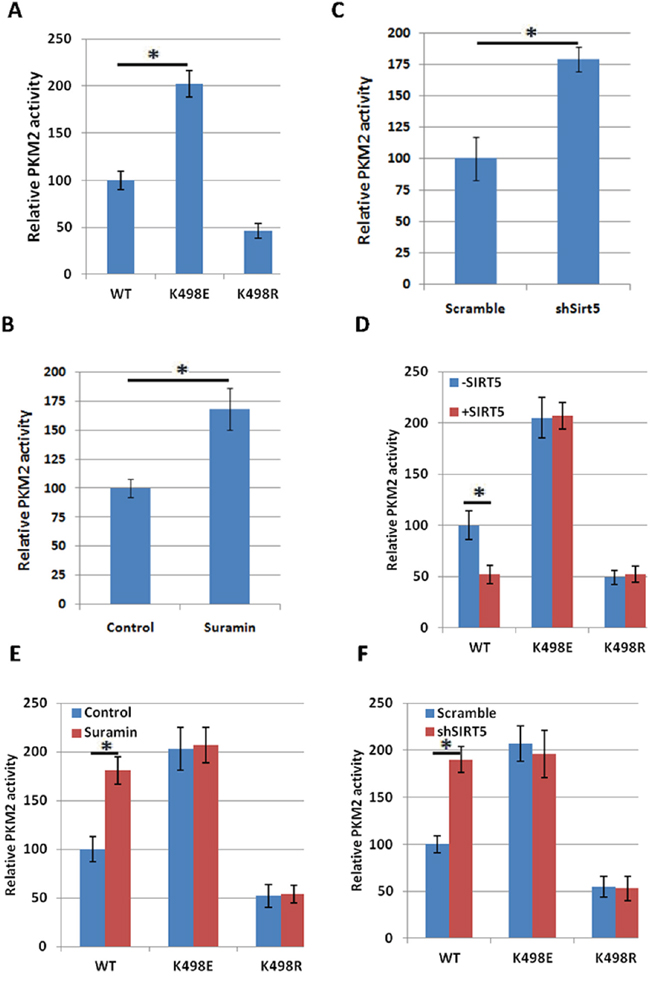 Succinylation at K498 of PKM2 sensitizes cells to oxidative damage

As Anastasiou et al. found that inhibition of PKM2 can divert glucose flux into the pentose phosphate pathway and thereby generate sufficient reducing potential to remove ROS [12], we treated cells with hydrogen peroxide (H2O2) or Mena to see whether oxidative stress can reduce PKM2 succinylation level and enzymatic activity. We observed that K498 succinylation level of PKM2 was decreased by H2O2 and Mena treatment in 239T cells (Figure 3A). We immunopurified ectopically expressed Flag-PKM2 from H2O2 or Mena treated cells and found that along with a reduction of succinylation, PKM2 activity was decreased about 40% upon H2O2 or Mena treatment (Figure 3B). Moreover, H2O2 or Mena treatment had no significant effect on the activity of PKM2 K498E and K498R mutants (Figure 3C), indicating that oxidative stress inhibited PKM2 activity via K498 desuccinylation. 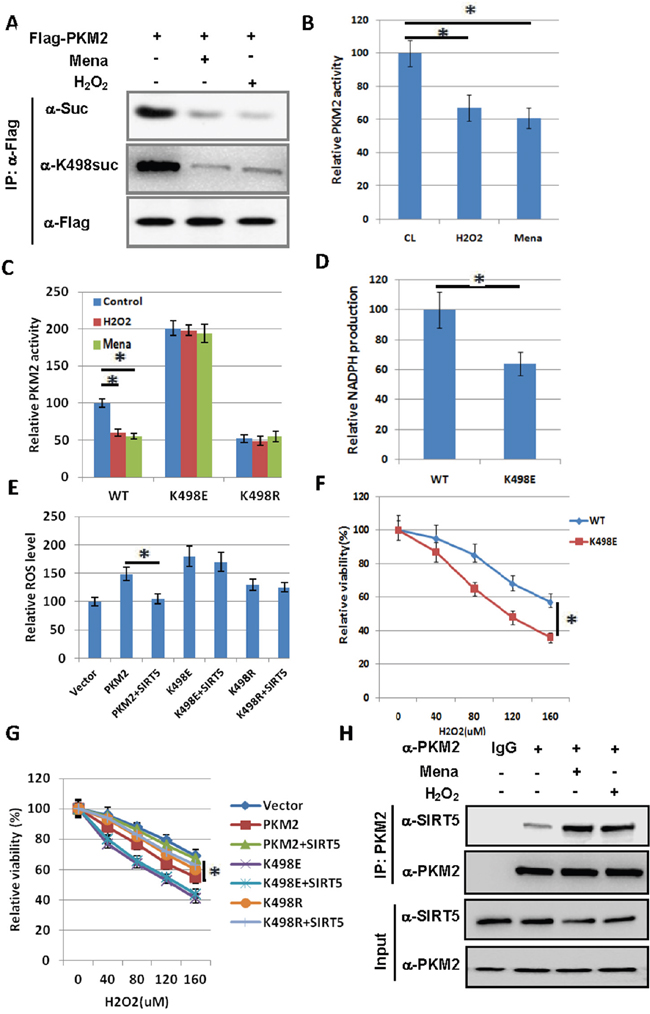 To explore the physiological significance of PKM2 succinylation at K498, we established stable cell lines in A549 cells with knocking down of endogenous PKM2 and putting back of Flag-tagged WT or K498E mutant of PKM2 (Figure 4A), respectively, followed by the measurement of NADPH. We found that the NADPH level decreased 36% in A549 cells expressing PKM2 K498E mutant compared with cells expressing wild-type PKM2 (Figure 3D), suggesting SIRT5 mediated desuccinylation of PKM2 may play a role in antioxidation. To further corroborate the finding of the role of suscinylation in suppressing the function of PKM2 in ROS clearance, we checked the effect of ectopically expressed PKM2 and SIRT5 on endogenous ROS level. Over expression of PKM2 increased the ROS level by 50%, and co-expression of SIRT5 can reverse the effect of PKM2 over expression on ROS level, while co-expression of SIRT5 cannot reduce the ROS level increased by over expression of PKM2 K498E and K498R mutants (Figure 3E). Supporting the functional importance of K498 succinylation in suppressing cellular antioxidation response, A549 cells expressing PKM2 K498E mutant were much more sensitive to hydrogen peroxide than the cell expressing wild-type PKM2 (Figure 3F). As SIRT5 catalyzes K498 desuccinylation of PKM2, next we examined the oxidative stress response of PKM2 and SIRT5 over expressed 293T cells. We found that PKM2 over expressing cells are more sensitive to oxidative stress, co-expression of SIRT5 can desensitize these cells to ROS, while co-expression of SIRT5 cannot desensitize cells expressing PKM2 K498E and K498R mutants (Figure 3G). As K498 succinylation level of PKM2 was decreased by H2O2 and Mena treatment (Figure 3A), we also determined the effect of oxidative stress on the interaction between PKM2 and SIRT5 and found that H2O2 and Mena treatment increase the binding of PKM2 to SIRT5 (Figure 3H). Collectively, succinylation at K498 of PKM2 sensitizes cells to oxidative damage. 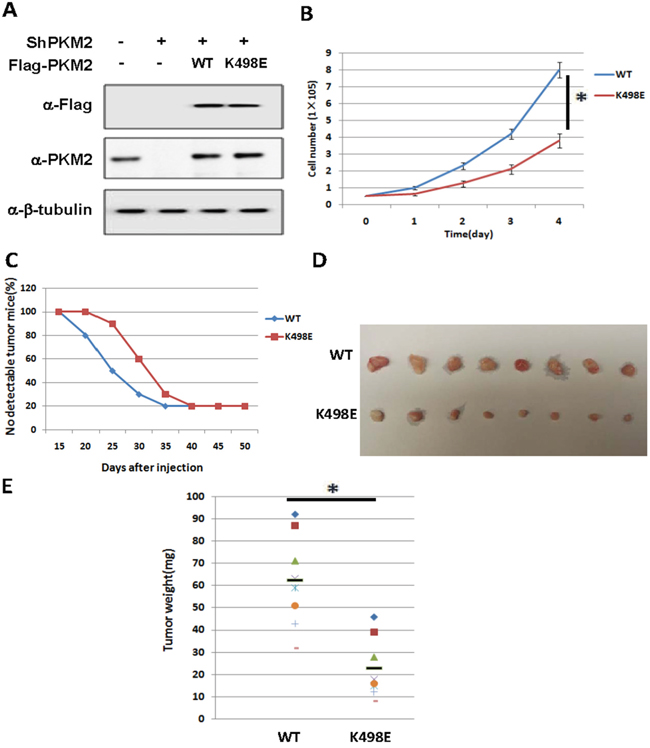 Given the high expression of PKM2 in cancer cells and K498 succinylation increases PKM2 activity, we examined the effect of K498 succinylation of PKM2 on cell proliferation and tumor growth by PKM2 knocking-down and putting-back stable cell lines. Endogenous PKM2 knockdown efficiency and the exogenous PKM2 protein level compared to endogenous level were shown in Figure 4A. From the result, we can see the endogenous PKM2 knockdown efficiency is high and the PKM2 putting back level is similar to endogenous PKM2. We found that A549 cells ectopically expressing succinylation-mimetic PKM2 K498E proliferated slower than cells expressing wild-type PKM2, indicating that succinylation of K498 inhibits cell proliferation (Figure 4B). To further determine whether K498 succinylation of PKM2 inhibits tumor growth, we performed xenograft experiment in immunodeficient nude mice using the A549 stable cell lines described above. Five million cells expressing either PKM2 wild-type or K498E mutant were injected into nude mice subcutaneously, and tumors were dissected after around 7 weeks. We found that cells expressing PKM2 K498E developed tumors much slower than cells expressing wild-type PKM2 (Figure 4C), as determined by both tumor volume (Figure 4D) and tumor weight (Figure 4E). Thus, Succinylation at K498 of PKM2 suppressed cell proliferation and tumor growth. 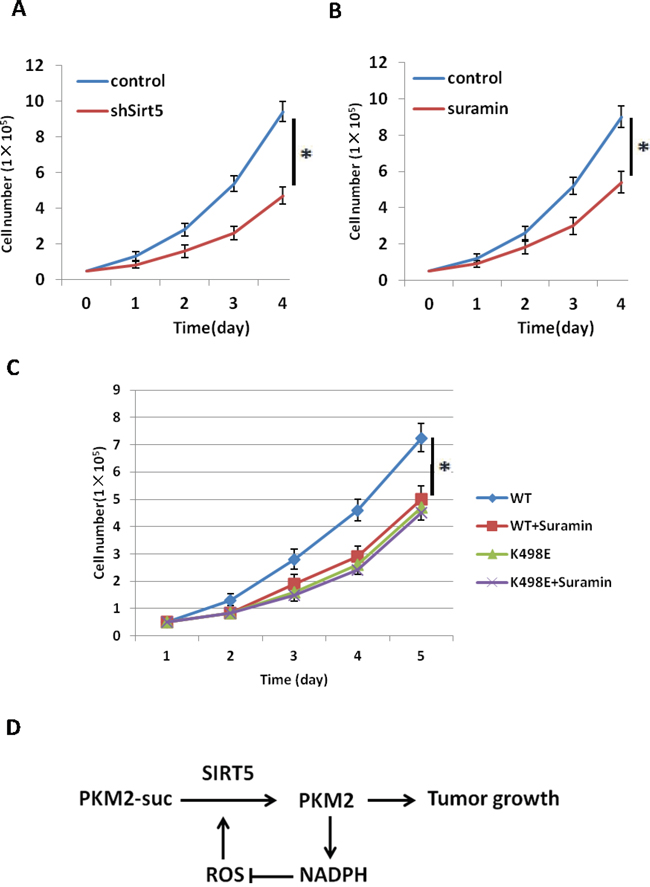 Metabolic alteration has emerged as a growth advantage for cancer cells. In this study, we demonstrated that desuccinylation of PKM2 by SIRT5 inhibits its activity in response to oxidative stress. This inhibition of PKM2 may facilitate the redirection of glucose metabolites into the pentose phosphate shunt, producing sufficient NADPH to eliminate ROS (Figure 5D). This may be an adaptive response which protects the cells from oxidative stress, as NADPH is required to generate the reduced form of glutathione, which is a major intracellular defense against damage mediated by ROS. Our data indicate that PKM2 desuccinylation by SIRT5 would provide an advantage for tumor cell growth by allowing them to sustain antioxidant responses and thereby support cell survival and proliferation under acute oxidative stress. Another finding of this study is that inhibition of Sirt5 can suppress tumor cell proliferation through desuccinylation of PKM2 K498, which provides a potential target for clinical cancer research and treatment.

Full-length cDNA of PKM2 was amplified by PCR and cloned into indicated vectors including pcDNA3-FLAG and pQCXIH, SIRT5 was cloned to pCDNA3-HA vector. Point mutations for PKM2 were generated by site-directed mutagenesis. The SIRT5 shRNA and scramble plasmids (Sigma) were commercially purchased.

Pyruvate kinase activity was measured by a continuous assay coupled to lactate dehydrogenase (LDH). The change in absorbance resulting from NADH oxidation was measured using a F-4600 Fluorescence Spectrophotometer (HITACHI). Assays for PK activity were carried out as previously described [7].

Cultured cells were treated with Suramin, H2O2 or Mena at the concentration of 40 uM, 500 uM and 50 uM respectively for indicated time in figure legend.

All retroviruses were produced by co-transfecting the package vector expressing gag and vsvg genes with the indicated plasmids into HEK293T cells and harvested 48 h after transfection. A549 cells were transduced with the retrovirus in the presence of 8 μg/ml polybrene. The shRNA plasmids produced retrovirus infected cells were selected in puromycin (2 μg/ml) for knocking down and the pLHCX (Clontech) plasmids containing two silent nucleotide substitutions in the sequence corresponding to the shRNA-targeted region produced retrovirus infected cells were selected in hygromycin (350 mg/ml) for putting back. After 7-12 days of selection, the expression levels of PKM2 were determined by western blot. The sequences of shRNA and control RNA were reported previously [7].

5×104 indicated stable cells were seeded in triplicate in 6-well plates and cell numbers were counted every day over a 4-day period. Nude mice (nu/nu, male 6 to 7-week-old) were injected subcutaneously with 5x106 A549 PKM2 knocking-down and wild-type or K498E mutant putting-back stable cells. Seven weeks later, the tumors were harvested, and the volume and weight of tumors were measured.