Neuroendocrine neoplasms (NENs) represent relatively rare tumors. The lack of diagnostic, therapeutic method and prognostic factors makes them a challenge to us. We retrospectively reviewed the data of 205 NENs patients among which 157 cases were followed-up. Proprotein convertase subtilisin/kexin 9 (PCSK9), a regulator of low density lipoprotein cholesterol (LDL-C), was confirmed as a target gene of microRNA-224. We found an increased incidence of NENs from 2012 to 2015. Women were usually diagnosed at earlier stages than men (P < 0.05). Tumor grading was associated with primary tumor site, especially esophagus and cardia NENs all at G3 (P <0.001). Age, tumor grading and LDL-C levels were independent risk factors of digestive NENs. Low LDL-C level was significantly correlated with survival rate and median overall survival (OS, P < 0.05). MicroRNA-224 agomir and PCSK9 siRNA could promote apoptosis and suppress proliferation, invasion of BON-1 cells (P < 0.05), but increase the level of glucocorticoid (GC, P < 0.05). Taken together, age, tumor grading and LDL-C level are independent risk factors of NENs. The miR-224/PCSK9/GC axis binds to tumorigenesis and prognosis of pancreatic NENs (p-NENs).

Neuroendocrine neoplasms (NENs), ever called carcinoid, represent a highly heterogeneous and intractable disease with multiple clinical manifestations [1]. In the latest 30 years, the incidence of this disease is obviously increased with a faster growing speed than other tumors [2]. The overall incidence of digestive NENs has increased by 720% from 1972 to 2004 [3]. Most NENs are bioactive nonfunctional tumors, which lead to an early diagnostic challenge.

The acknowledged primary tumor site, grade and metastasis have been demonstrated as prognostic factors of NENs which are related to the 5-year survival rate [4, 5]. However, there is almost no other prognostic factor. As a recently discovered regulator of low density lipoprotein cholesterol (LDL-C), proprotein convertase subtilisin/kexin 9 (PCSK9) has been reported in early onset of heart disease family. It directly binds with LDL-C receptor (LDLR) on stem cells, resulting in lysosomal degradation of LDLR complex in liver and following accumulation of LDL-C in serum [6, 7]. Nevertheless, there is no report towards PCSK9/LDL-C and tumorigenesis.

MicroRNAs (miRNAs) are endogenously expressed non-coding RNAs which can bind to 3-untranslated region (UTR) of mRNAs [8]. Previous studies indicated the crucial role of miR-224 in solid tumors involving colorectal cancer, prostate cancer and hepatocellular carcinoma [9–11]. But there is no study on the effect of miR-224 in NENs.

The current paper retrospectively analyzed 205 cases with NENs and discovered LDL-C level as an independent risk factor of pancreatic NENs (p-NENs). Then, we decoded its mechanisms via miR-224/PCSK9/GC axis mediated cellular apoptosis, proliferation and invasion in p-NENs for the first time. Moreover, we demonstrated PCSK9 as a direct target of miR-224 and increased miR-224 or decreased PCSK9 could promote apoptosis and suppress proliferation, invasion of BON-1 cells in p-NENs. This may help us to evaluate the prognosis of p-NENs patients and provide a new target to the treatment of p-NENs. 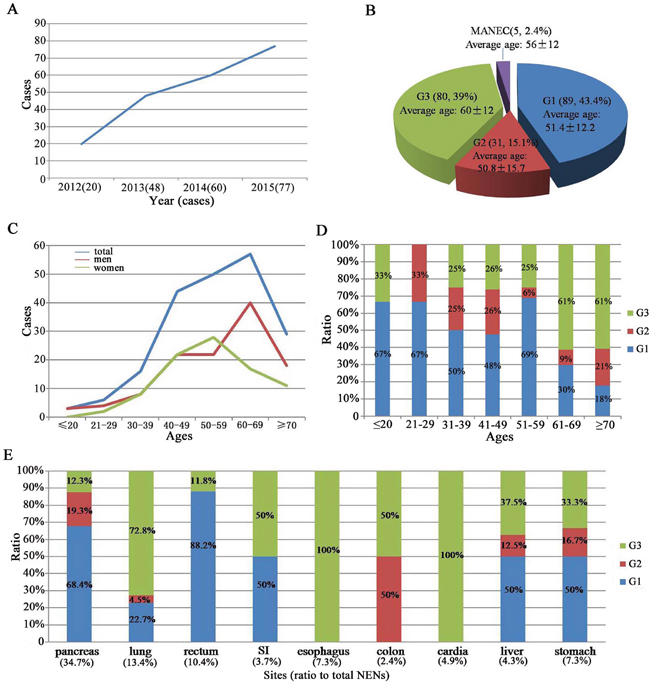 Figure 1: Epidemiology of 205 NENs patients. A. a significant increase was shown in the incidence of NENs from 2012 to 2015. B. distribution of patients according to stage and the mean age at diagnosis. C. the most common age of NENs in men and women. D. the relationship between tumor grading and the age. E. the common primary tumor site and the relationship between tumor grading and the primary tumor site. 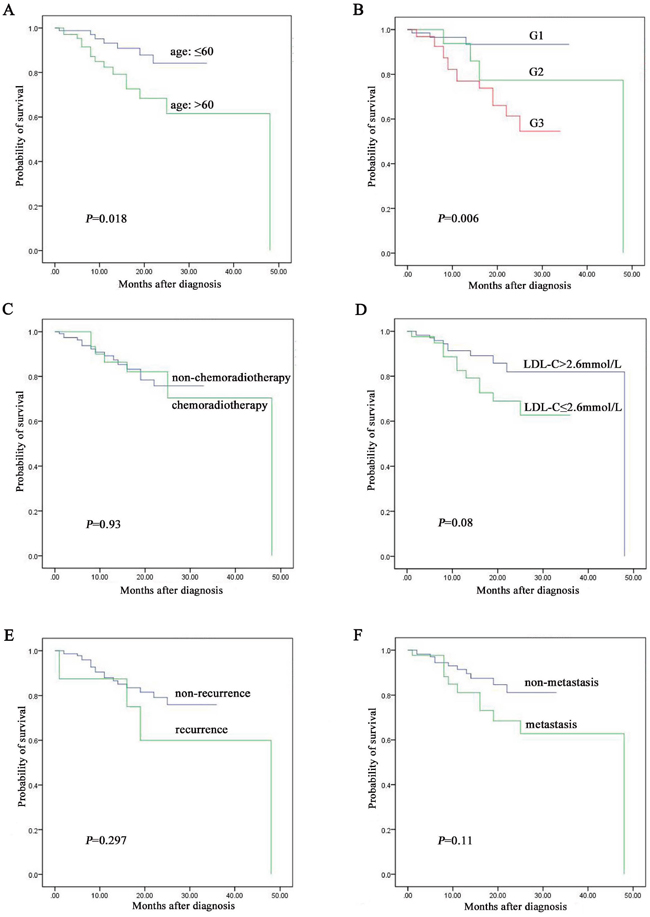 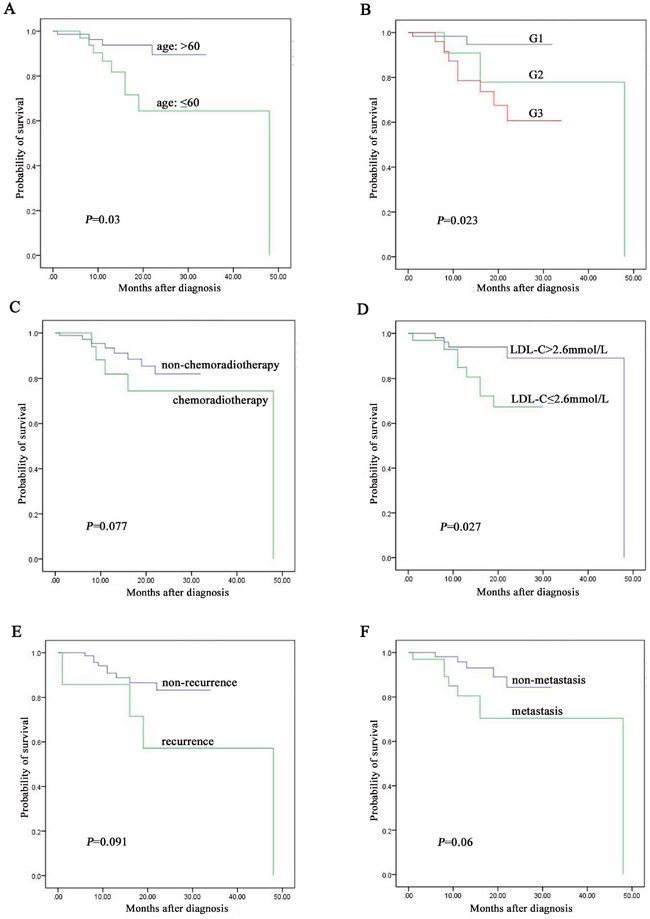 PCSK9 is the direct target of miR-224

PCSK9 was an effective regulator of LDL-C as previous reported. We detected expression of PCSK9 in tissue samples of p-NENs and found a significantly increase than para-tumor tissues (P < 0.01, Figure 4A). Therefore, we chose it as the following target. First, we used miRNA target predicting programs (Target-Scan) to discover PCSK9 as a target of miR-224. Then, luciferase reporter was performed to confirm PCSK9 being targeted by miR-224. PCSK9 reporter was significantly decreased upon co-transfection with miR-224 agomir, but not in control group with mutated sequence (P < 0.05, Figure 4B). 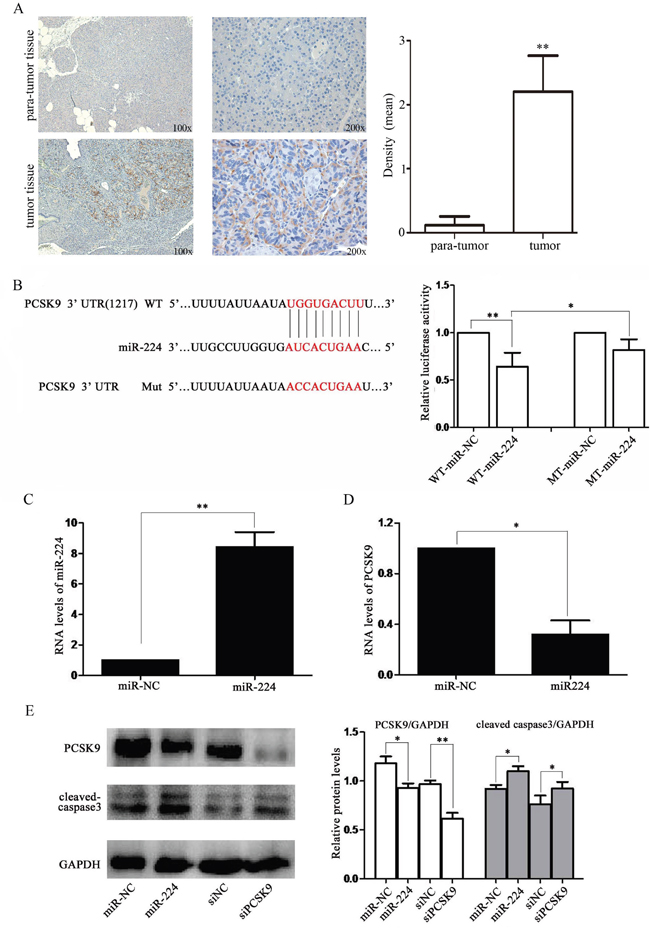 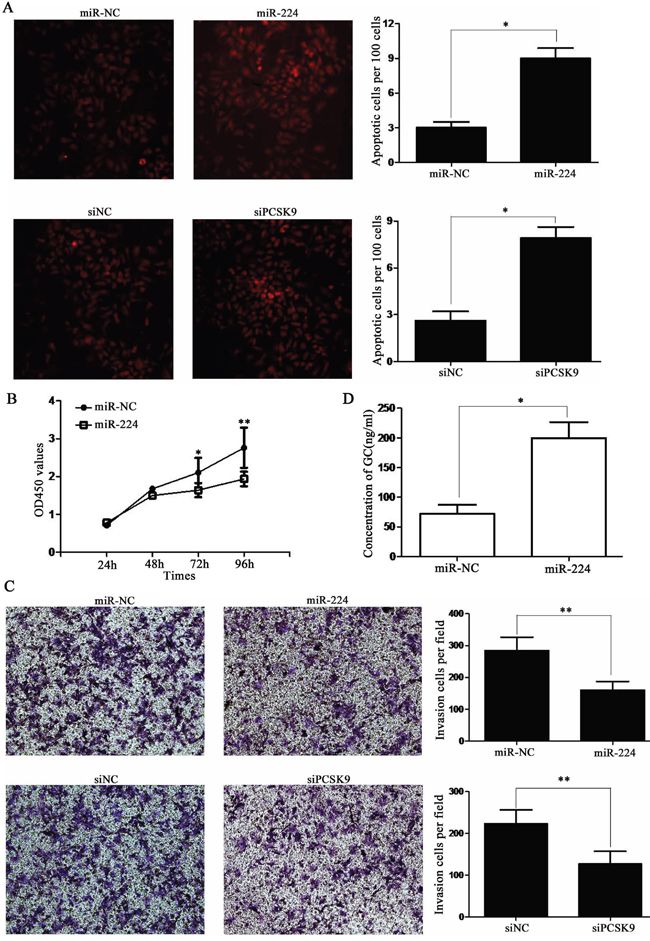 No tumor formation in the nude-mice with BON-1 cells

Since 1907, we have paid attention to them for a long way of more than 100 years. However, that is still a big challenge about early diagnosis and effective treatment [3, 13]. Here, we retrospectively analyzed 205 cases of NENs in our hospital about clinical data and demonstrated a significant increase in incidence of NENs in recent 4 years.

Some discrepancies to previous studies or results still exist: (1) the most common primary tumor site is pancreas, followed with small intestine; (2) tumor grading was strongly associated with primary tumor site, especially esophagus and cardia all at NENs G3; (3) level of LDL-C is significantly correlated with the survival rate and OS [2–4, 14–16]. The most important thing is that esophageal and cardiac NENs need more attentions owing to the bad differentiation.

LDL-C is known as adverse cholesterol and raw material of GC synthesis which plays a critical role in cellular apoptosis [17, 18]. Several studies have showed effect of GC on lipid metabolism [19], but seldom explored effect of lipid level on GC synthesis. Ronald et al have reported for the first time an inhibitory role of LDLR in GC production [20]. However, we found a discrepant result in our paper. An increasing level of GC was shown upon up-regulation of miR-224 or down-regulation of PCSK9. We considered it as a dynamic state. In detail, LDLR-mediated degradation of LDL-C released more raw material of GC synthesis, inducing accumulation of GC in plasma.

PCSK9 is responsible for degradation of the LDL-C receptor at the cell surface, and thus has a direct effect on intracellular and serum LDL-C levels [21]. It has only been reported as a target gene of two miRNA (miR-27a and miR-124) [22, 23]. However, relationship between miR-224 and PCSK9 is still unknown. MiR-224 has been reported to correlated with apoptosis, proliferation, cell cycle and invasion of several cancers especially the lung cancer and colon cancer [24–26]. In our study, we demonstrated PCSK9 as a direct target of miR-224. Moreover, we uncovered that increased miR-224 or decreased PCSK9 could promote apoptosis and suppress proliferation, invasion of BON-1 cells in pNENs.

In conclusion, we demonstrate that age, tumor grading and LDL-C level are independent risk factors of digestive NENs. Level of LDL-C is significantly correlated with survival rate and OS of NENs patients. MiR-224/PCSK9/GC axis closely correlated with carcinogenisis and prognosis of p-NENs which may provide a new target to treatment of p-NENs.

Epidemiological study involved 205 patients (117 men, 88 women) from database of record room in our hospital from 2012 to 2015, with diagnosis of NENs according to WHO 2010 criteria [2]. A total of 157 patients including 116 cases of digestive NENs were successfully followed-up. We summarized clinical features and prognostic factors including age, sex, grading (G1, G2, G3 without MANEC), distant metastases at diagnosis, chemoradiotherapy and relapse. Date for survival analyses was from diagnosis until death. Serum lipid levels of NENs patients and 200 healthy examinees with similar age and sex were retrospectively collected at the first coming to our hospital before surgery. This study was approved by ethics committee of the First Affiliated Hospital with Nanjing Medical University.

Tissues of p-NENs patients (n=6) were gained from pathology department in our hospital. Immunohistochemistry assay was performed according to manufacturer’s protocol. The immunohistochemical kit was used (Beyotime Co., Ltd, China) for all procedures. Para-tumor samples were served as negative controls. These slices were visualized with a microscope (IX71; Olympus Corp., Tokyo, Japan).

For immunoblot analysis, about 80 μg of routinely distracted cellular protein was resolved on a 10% sodium dodecyl sulfate polyacrylamide electrophoresis gel. PCSK9 (1:6000), cleaved-caspase 3 (1:6000) and glyceraldehyde-3-phosphate dehydrogenase (GAPDH, 1:6000) were served as primary antibodies (Abcam, USA). GAPDH was served as an internal control. The membranes were exposed to bands with a Chemiluminescent HRP Substrate (Millipore, MA, USA).

A Cell Counting Kit-8 (CCK-8) assay was performed following manufacturer’s protocol to evaluate cellular proliferation. Each sample was supplemented with 10 μl tetrazolium substrate after transfection for 24, 48, 72 and 96 h. Optical density (OD) was then read at 450 nm in a spectrophotometer (Bio-Tek, USA).

Cell invasion viability was performed by Transwell assay according to the protocol in previous studies [27]. Migrated cells were photographed and counted at 6 random fields of each group.

Animal experiments were supported by the Institute for Laboratory Animal Research at Nanjing Medical University. Twelve BALB/c nude mice (4 to 5 weeks old, females) were purchased from Animal Center of Jiangsu province. Pre-transfected BON-1 cells with miR-224 agomir or control agomir were collected in PBS. The highest concentration of 1×107 cells were subcutaneously injected into oxter of each mouse (4/group). Situation and tumor formation were observed and recorded every 2 days.

Pictures drawing and statistical analysis were performed with GraphPad prism 5 and SPSS (version13.0). Differences between two groups were estimated with Student's t test. Continuous variables were expressed as mean ± SD. The Pearson χ2 test or Fisher exact test was performed for crosstables. The univariate analysis was performed with Kaplan-Meier method and compared with log-rank tests for the survival rate. Pearson relevant analysis was calculated between levels of LDL-C and overall survival and OS. A P value of less than 0.05 was considered statistically significant.

16. Ploeckinger U, Kloeppel G, Wiedenmann B, Lohmann R and representatives of 21 German NETC. The German NET-registry: an audit on the diagnosis and therapy of neuroendocrine tumors. Neuroendocrinology. 2009; 90:349-363.