Molecular epidemiological studies suggest that microRNA polymorphisms may be associated with an increased risk of coronary heart disease (CHD). However, the results of these studies were inconsistent and inconclusive. To derive a more precise evaluation, we performed a meta-analysis focused on the associations between microRNA polymorphisms and CHD risk. PubMed, Embase, CNKI and Wanfang databases were searched. Odds ratios (ORs) with 95% confidence intervals (CIs) were applied to assess the association between microRNA-146a rs2910164, microRNA-196a2 rs11614913, microRNA-499 rs3746444 and microRNA-149 rs71428439 polymorphisms and CHD susceptibility. Heterogeneity, publication bias and sensitivity analysis were conducted to measure the robustness of our findings. A total of thirteen related studies involving 8,120 patients and 8,364 controls were analyzed. Significant associations between microRNA-146a rs2910164 polymorphism and CHD risk were observed in the total population, as well as in subgroup analysis. For microRNA-196a2 rs11614913 and microRNA-499 rs3746444, similarly increased risks were also found. In addition, no significant association was detected between microRNA-149 rs71428439 polymorphism and CHD risk. In conclusion, our meta-analyses suggest that microRNA polymorphisms may be associated with increased risk of CHD development.

Coronary heart disease (CHD) has become a main cause of morbidity and mortality worldwide [1]. In 2010, approximately 7,000,000 deaths were reported globally, and in which CHD took up the largest proportion of death causes and years of life lost [2]. Traditional factors, such as hypertension, diabetes and smoking have been proven to contribute to the occurrence and progression of CHD [3–5]. However, more existed risk factors leading to CHD susceptibility need to be explored. Till now, increasing molecular epidemiological studies have revealed the important role of genetic factors in CHD, and the genetic predisposition is attracting more and more attention [6, 7].

MicroRNAs (miRNAs) are small single-stranded non-coding RNA molecules which function in the post-transcriptional regulation of gene expression [8]. Emerging evidence has indicated that the functions of miRNAs appear to be in a variety of fundamental biological processes, involving proliferation, differentiation and stress resistance [9–11]. In addition, recent studies have shown that miRNAs take part in the regulation of glucose and lipid metabolism, the proliferation of smooth muscle cells and vascular inflammation, which play important roles in the pathogenesis of CHD [12–16].

By affecting the miRNA maturation and the binding to target mRNAs, single nucleotide polymorphisms (SNPs) located in pre-microRNA (pre-miR) genes may alter the expression levels of a large number of target genes and cause the complex functional consequences [17]. Therefore, functional SNPs in miRNA genes may affect disease susceptibility. Previous studies have confirmed that four common miRNA polymorphisms (rs2910164 G>C in miR-146a, rs11614913 T>C in miR-196a2, rs3746444 A>G in miR-499 and rs71428439 A>G in miR-149) were associated with several diseases, including various cancers and autoimmune diseases [18–21]. Recently, these four SNPs were under investigation to uncover the possible genetic predisposing to CHD, but the results were inconsistent. Therefore, we conducted a meta-analysis involving all related publications to assess the association between microRNA polymorphisms and CHD risk. 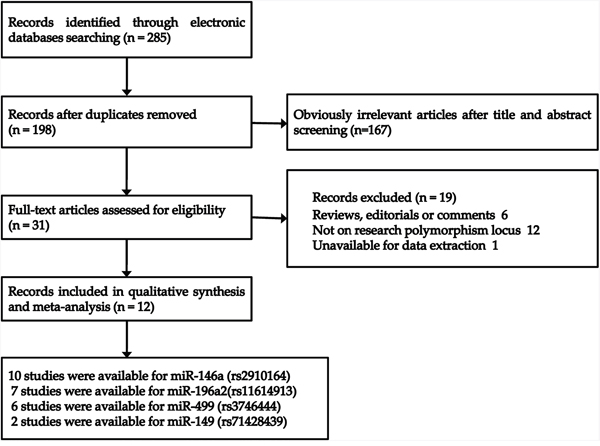 Table 1: Characteristics of case-control studies on microRNA polymorphisms and CHD risk included in the meta-analysis 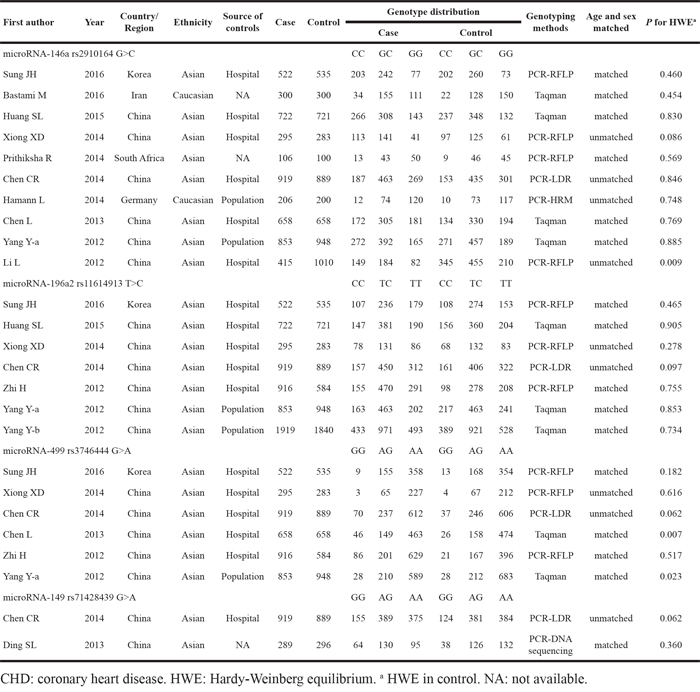 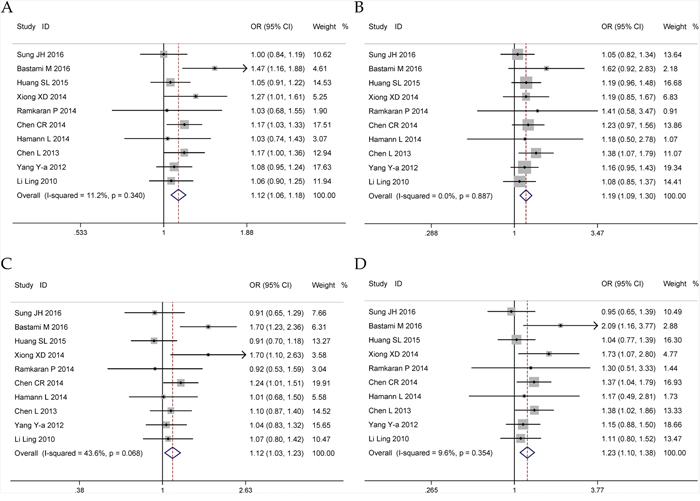 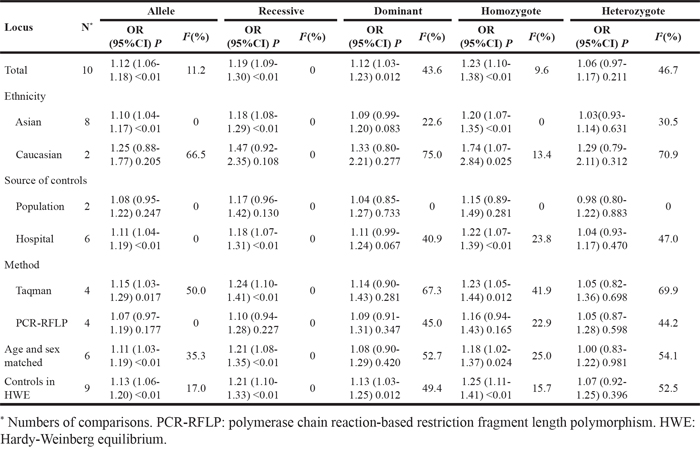 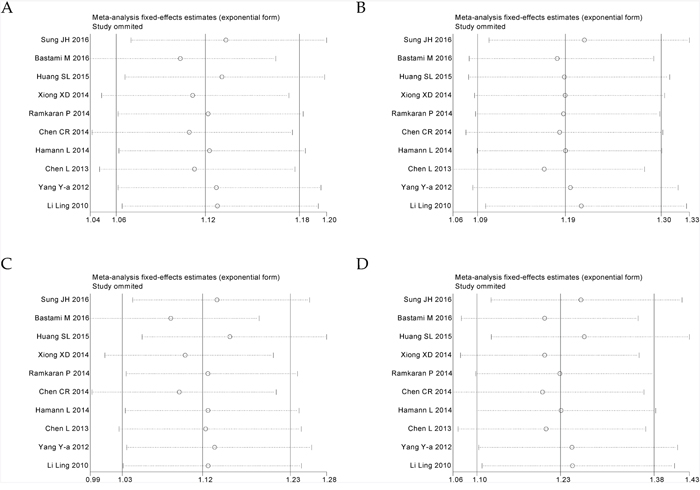 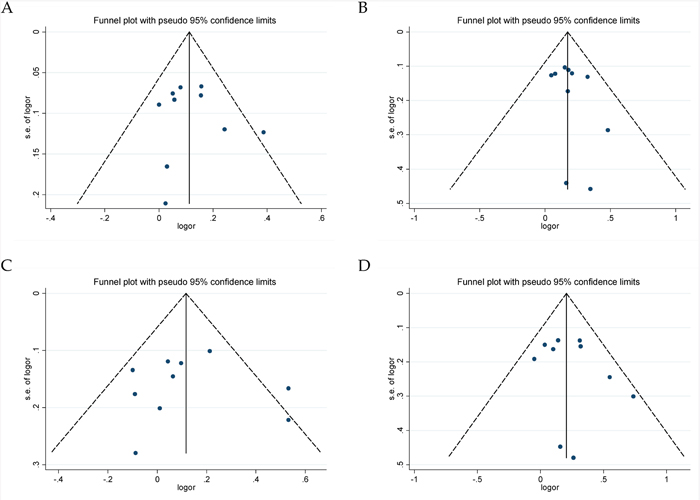 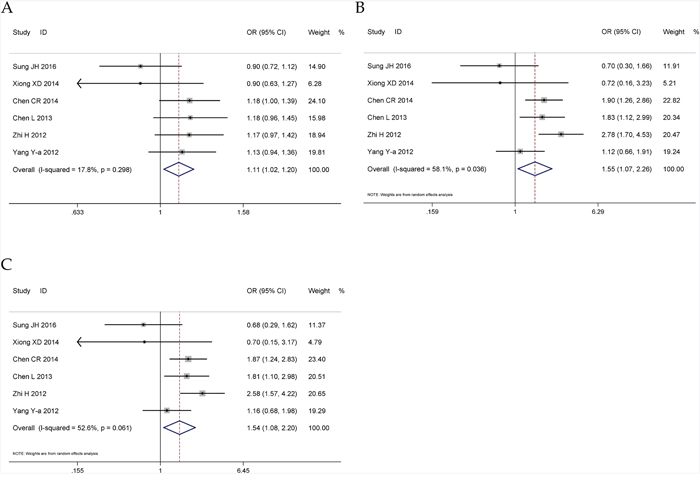 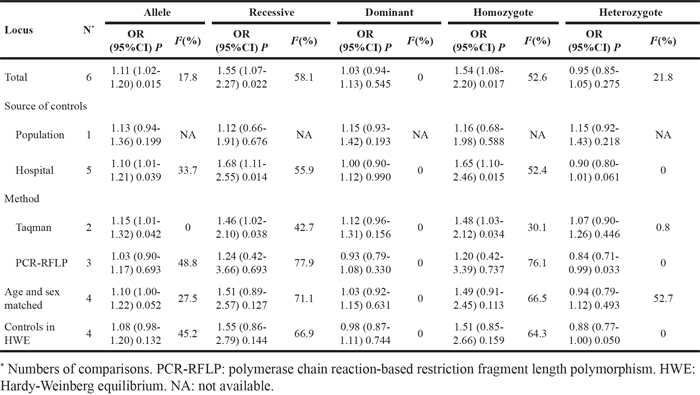 Coronary heart disease is the most common cause of morbidity and mortality in most regions worldwide. Although we have conducted some major advances in the understanding of cardiovascular disease in more recent decades, detailed pathogenesis of CHD remain to be explored. Nowadays, the association between polymorphisms of microRNAs and CHD risk is drawing more and more attention.

As for miRNA-146a rs2910164 G>C, this is the latest and largest meta-analysis investigated the association with CHD risk. Compared with the previous meta-analysis with four studies including 2506 subjects [35], we found that the significant association existed in recessive model, as well as no association in heterozygous model. The advantages of our analysis are as follows. First, our meta-analysis had much larger sample size: we added another six recent studies involving 8,134 subjects which were not part of the previous meta-analysis [23, 24, 27, 29, 31, 32]. Second, sensitivity analyses showed that our results were statistically robust in four genetic models. Also, no significant publication bias was detected in our meta-analysis. Third, we performed a more comprehensive subgroup analyses. Stratification by ethnicity showed an increased CHD risk for microRNA-146a rs2910164 G>C polymorphism in Asians. Furthermore, similar increased results were observed in the group with genotyping method of Taqman, rather than PCR-RFLP. It revealed that Taqman was a more useful genotyping method to improve the accuracy of experiment.

To the best of our knowledge, this is the first meta-analysis assessing the association of miRNA-196a2 rs11614913 T>C, miRNA-499 rs3746444 A>G, and miRNA-149 rs71428439 A>G polymorphisms with CHD susceptibility. Interestingly, by increasing the sample size, the results of the combined analysis revealed a significant association with CHD risk for microRNA-196a2 rs11614913, even though no association was found in each single original study. How can we explain the association of miRNA-196a2 rs11614913 with CHD susceptibility? First, the miRNA-196a2 rs11614913 polymorphism involved a T to C nucleotide substitution and situated in the 3p strand of mature miRNA regions, which might affect both pre-miRNA maturation of 5p and 3p miRNAs and the interacting of target mRNAs to 3p mature miRNAs [36]. Second, it has been reported that miR-196a2 was closely associated with the regulation of annexin A1 (ANXA1) [37]. As an important modulator in atherosclerosis, ANXA1 can inhibit not only the monocyte adhesion to endothelium but also the expression of inflammatory enzymes, such as inducible cyclooxygenase 2 (COX-2) and phospholipase A2 [38, 39]. Additionally, the predicted targets of miR-196a2 included hundreds of genes (http://www.targetscan.org). There also existed the possibility that other targets of miR-196a2 might play some roles in the development of CHD, despite it was unknown by far.

Our meta-analysis had several limitations. First of all, the ethnicity of most subjects was Asian in the current study and this restricted the general application of the results to other populations. Second, only articles published in English or Chinese were selected, potentially causing a language bias. Third, in the sensitivity analysis for miRNA-196a2 rs11614913 T>C and miRNA-499 rs3746444 A>G, we found that omission of each study made some significant differences on the results. Although it may be explained by the small number of studies included, the caution should be indicated when interpreting the association of these two miRNA polymorphisms with CHD. Third, the heterogeneity existed in our meta-analysis for miRNA-499 rs3746444 A>G and microRNA-149 rs71428439 A>G. For rs3746444, although subgroup and sensitivity analyses were performed, unfortunately, we have not found the sources of heterogeneity. Also, as for rs71428439, only two included studies were too small to analyze the sources of heterogeneity. Fourth, CHD is both multi-factorial disease influenced by genetic and environmental factors. However, in our current meta-analysis, the inter-gene and gene-environment interactions could not be conducted owing to the data deficiency. Last but not the least, genetic epidemiological studies show different genetic variants can predispose to different subtypes of CHD [40–42]. So subtypes of CHD, such as myocardial infarction, acute coronary syndrome and stable angina should be further analyzed. Unfortunately, we could not assess the difference among these subtypes of CHD due to insufficient statistical data in the literature.

In conclusion, the current meta-analysis demonstrated that three functional polymorphisms of microRNA-146a rs2910164 G>C, microRNA-196a2 rs11614913 T>C and microRNA-499 rs3746444 A>G might take important part in the development of CHD. Considering the limitations in the current meta-analysis, our results should be interpreted with caution. More eligible studies with rigorous design are needed to confirm the association of above polymorphisms in miRNA and CHD risk in the future.

All selected studies had to meet the following criteria: (1) published studies based on case-control design assessing the association of rs2910164 G>C in miR-146a, rs11614913 T>C in miR-196a2, rs3746444 A>G in miR-499 and rs71428439 A>G in miR-149 with CHD risk; (2) availability of allele or genotype frequency for calculating odds radio (OR) and their 95% confidence interval (CI). Studies were excluded if they investigated the progression, severity, phenotype modification, response to treatment, survival or family based studies. Moreover, meeting abstracts, case reports, editorials, review articles and non-English and non-Chinese articles were also excluded. For duplicate publications, the one with more complete design or larger sample size was finally selected.

The two of the authors independently extracted the data from each relevant study including the first author, publication year, study country/region, ethnicity of participants (such as Asian or Caucasian), sources of controls, genotyping method, case-control matched status, HWE status of controls and number of genotypes in CHD cases and controls. Disagreements were reconciled through group discussion. The Hardy-Weinberg equilibrium (HWE) was calculated based on the genotypes of the controls.

Heterogeneity among studies was examined with the I2 statistic and I2>50% indicates significant heterogeneity between the studies. Based on the test of heterogeneity, a pooled OR was calculated by using fixed or random effect model, along with the 95% CI to measure the strength of the genetic association. For the microRNA-146a rs2910164 G>C polymorphism, the pooled ORs were obtained for the allele contrast (C vs. G), recessive model (CC vs. GG+GC), dominant model (GC+CC vs. GG), homozygous (co-dominant) model (CC vs. GG) and heterozygous (co-dominant) model (GC vs. GG). Similar genetic models were also assessed for microRNA-196a2 rs11614913 T>C, microRNA-499 rs3746444 A>G and microRNA-149 rs71428439 A>G variants. Subgroup analyses of ethnicity, source of controls, genotyping methods, case-control matched status and HWE status of controls were also submitted to statistical testing. In order to evaluate the stability of the results, sensitivity analysis was used, which meant omitting one study at a time, and then compared to show whether a significant difference existed between the former and the latter results. Publication bias was examined by the visual inspection of funnel plot, and Egger's regression test. Data were analyzed and processed using Stata 12.0 (Stata Corporation, College Station, TX, USA). P<0.05 was considered statistically significant.

39. Perretti M, D'Acquisto F. Annexin A1 and glucocorticoids as effectors of the resolution of inflammation. Nature reviews Immunology. 2009; 9:62-70.