This study is aimed to conduct a meta-analysis to evaluate the prognostic value of lymphovascular space invasion(LVSI) and to explore the potential association of SNAI1 and SNAI2 with LVSI in ovarian cancer. A systematic literature search in PubMed, ISI Web of Science, and Medline was conducted to identify relevant studies assessing the prognostic value of LVSI in ovarian cancer. The main outcomes analyzed were progression free survival/disease free survival and overall survival. TCGA database was used to explore the potential link of SNAI1 and SNAI2 with LVSI status. A total of 11 eligible studies enrolling 1817 patients were included for the meta-analysis. The overall analysis indicated that LVSI presence was associated with shorter duration of survival in ovarian cancer patients. Multivariate analysis indicated that both advanced stage and SNAI2 expression were associated with increased risk of LVSI presence. Survival analysis indicated that tumors with LVSI presence and high SNAI2 expression were significantly correlated with poorer survival when compared to tumors with both LVSI absence and low SNAI2 expression. In conclusion, LVSI presence was associated with worse clinical outcomes in ovarian cancer. Increased expression of SNAI2 and advanced stage were independent risk factors for LVSI presence. Our findings also emphasizes the potential of SNAI2 in promoting lymphovascular spread of ovarian cancer.

Ovarian cancer is the most fatal gynecologic malignancy and most of the patients are not diagnosed until an advanced stage [1]. During the past decade, researchers have been striving to identity potential prognostic predictors for ovarian cancer [2–5]. For example, debulking status has been associated with the clinical outcome [6, 7]. Namely, patients with optimal debulking surgery have a better survival than patients with suboptimal debulking surgery [6]. However, some optimally debulked cases present therapy resistance and developed recurrence, and subsequently have a worse outcome. At the other extreme, part of the suboptimally debulked cases exhibit a better therapy response, and thus have a better outcome. This fact indicated that other factors might play a critical role in determining survival. Identification of new factors associated with ovarian cancer prognosis will be helpful in stratifying patients who are likely to experience a disease progression to standard therapy and could benefit from alternative management [8].

In present study, we first conducted a meta-analysis to establish the prognostic value of LVSI presence in ovarian cancer. Meanwhile, we try to explore the potential link between SNAI1, SNAI2, and LVSI status in ovarian cancer using data from The Cancer Genome Atlas (TCGA) database.

One hundred fourteen studies were identified by the primary computerized literature search. Of these, 91 publications were excluded because they were either irrelevant to the present study, written in non-English, or laboratory studies. Twenty-three records were further reviewed in detail. Thirteen publications were further excluded because of no survival data or repeated publications. The survival data on LVSI in the TCGA dataset was also included in our meta-analysis. Finally, 11 studies were identified as eligible for inclusion in our meta-analysis [6, 9–18] (Figure 1). The included 11 studies encompassed 1817 ovarian cancer patients. The main characteristics of the included studies are shown in Table 1. 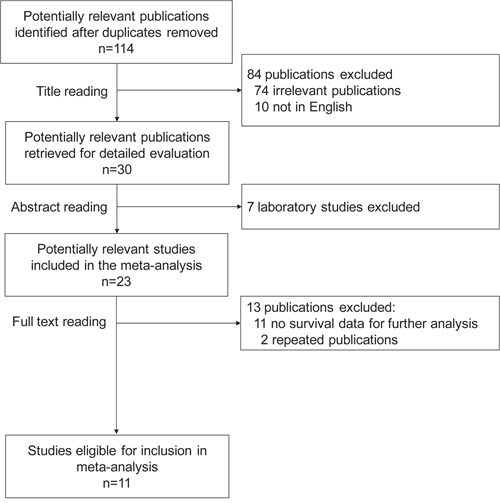 Figure 1: Flow chart of the search strategy used for selection of eligible studies.

The effects of LVSI presence on survival in ovarian cancer

HRs for PFS/DFS were available in 8 studies. The estimated pooled HR for all studies suggested a significantly increased risk of disease progression in patients with LVSI presence (Figure 2A; HR, 2.29; 95%CI, 1.55-3.37; PHR<0.001; random effects model). Funnel plot revealed that there was publication bias (Figure 2B). The trim-and-fill analysis revealed that one study might be missing. If this study were published, LVSI presence remained significantly correlated with disease progression (Figure 2C; HR, 2.12; 95%CI, 1.43–3.14; PHR<0.001; random effects model). One-way sensitivity analysis confirmed the stability of our results (Figure 2D). Subgroup analyses stratified by region and histology confirmed that LVSI presence was associated with increased risk of disease progression in all subgroups except the subgroup designated “Europe” (Figure 2E and 2F).

Figure 2: Meta-analysis of the HR for PFS/DFS for ovarian cancer patients depending on LVSI status. A. PFS/DFS for ovarian cancer patients, random effects model; B. Assessment of publication bias by funnel plots; C. Identification of potential missing studies by the trim and fill analysis; D. Confirmation of the stability of the pooled results by one-way sensitivity analysis. E. Subgroup analyses stratified by region. F. Subgroup analyses stratified by histology.

HRs for OS were available in 11 studies. The estimated pooled HR for all studies suggested a significantly increased risk of death in patients with LVSI presence (Figure 2B; HR, 1.71; 95%CI, 1.42-2.07; PHR<0.001; fixed effects model). Funnel plot revealed that there was publication bias (Figure 3B). The trim-and-fill analysis revealed that 4 studies might be missing. If these studies were published, LVSI presence remained significantly correlated with death of patients (Figure 3C; HR, 1.58; 95%CI, 1.13–2.22; PHR=0.008; random effects model). One-way sensitivity analysis confirmed the stability of our results (Figure 3D). Subgroup analyses stratified by region and histology confirmed that LVSI presence was associated with increased risk of death in all subgroups (Figure 3E & 3F).

Figure 3: Meta-analysis of the HR for OS for ovarian cancer patients depending on LVSI status. A. PFS/DFS for ovarian cancer patients, fixed effects model; B. Assessment of publication bias by funnel plots; C. Identification of potential missing studies by the trim and fill analysis; D. Confirmation of the stability of the pooled results by one-way sensitivity analysis. E. Subgroup analyses stratified by region. F. Subgroup analyses stratified by histology. 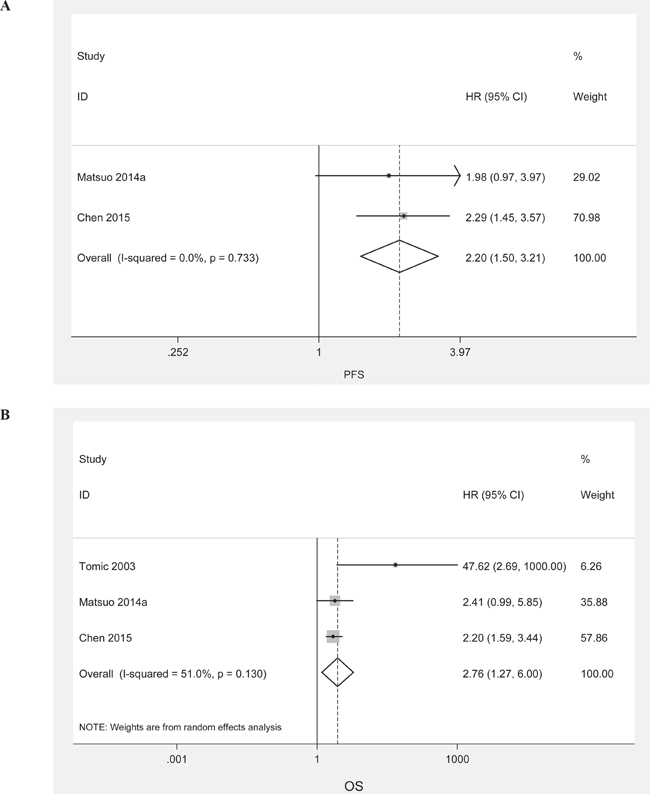 A total of 192 ovarian cancer patients with LVSI information from the TCGA dataset were included in this study. The clinical and pathological characteristics of the patients with or without LVSI are listed in Table 2. Advanced stage was significantly associated with increased risk of LVSI presence. Univariate analysis also revealed that the expression of SNAI1 and SNAI2 were all positively correlated with LVSI presence. In a multivariate model, advanced stage (OR, 4.44; 95%CI, 1.443-13.75; P =0.01) and SNAI2 expression (OR, 4.10; 95%CI, 1.78-9.47; P =0.001) remained significantly correlated with LVSI presence. 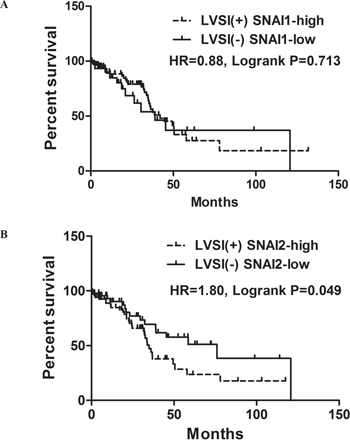 LVSI has been associated with worse prognosis of various cancers [19–21]. Consistently, our meta-analysis also indicated that LVSI presence was associated with shorter duration of PFS/DFS and OS in ovarian cancer. However, certain limitations should be considered when interpreting the pooled results. First, the present meta-analysis is based on the data from previously published retrospective studies, and the updated individual patient data were not integrated into the present analysis. Incorporation of updated individual data may further improve the accuracy and stability of the pooled findings. Second, significant heterogeneity existed in the present study. Variability in histology of ovarian cancer, patient population, and study design may result in the heterogeneity. Though our subgroup analyses supported the stability of our findings, multicenter prospective studies are strongly recommended to validate the prognostic value of LVSI in ovarian cancer. Third, publication bias is another concern. We tried to identify all relevant articles, but unavoidably, some articles could still be missing. Missing articles may contain negative results that could decrease the prognostic power of LVSI status. However, we performed the trim-and-fill analysis and found that even if these missing studies were included the association of LVSI presence and worse clinical outcome was still significant.

SNAI2 is a key inducer of epithelial to mesenchymal transition (EMT). Previous results showed that SNAI2 increased the motile and invasive ability of ovarian cancer cells [22, 23]. This functional role of SNAI2 might facilitate the extravasation of ovarian cancer cells into surrounding tissues, for example, the capillary lumens of lymphovascular system. Interestingly, our data demonstrated that SNAI2 was an independent risk factor for LVSI presence. Previous results indicated that estrogen receptor expression was positively correlated with LVSI presence in ovarian cancer [9]. Additionally, SNAI2 was the downstream effector of estrogen receptor alpha pathway [24]. Whether there is a potential link between estrogen-signaling, SNAI2, and LVSI are not known and should be examined. Recently, multiple studies have indicated that circulating tumor cells (CTCs) status is an adverse prognostic factor for ovarian cancer [3, 25]. And it has also been demonstrated that EMT is conducive to CTCs generation and survival [26]. Whether CTCs is a mirror of LVSI are also not known and should be examined.

In conclusion, LVSI presence is associated with worse clinical outcomes. The aberrant expression of SNAI2 and advanced stage are independent risk factors for the LVSI presence in ovarian cancer. This study also emphasizes the potential and importance of SNAI2 in promoting lymphovascular spread of ovarian cancer.

The studies were considered eligible if they reported survival data in ovarian cancer patients stratified by LVSI status and provided sufficient data for determining an estimate of hazard ratio (HR) and a 95% confidence interval (CI). All articles were scrutinized to avoid inclusion of duplicate data. When the patient populations overlapped between studies, only the most recent or most complete publication was included to avoid duplications.

We downloaded the level 3 Affymetrix HG-U133A gene expression data from 192 serous ovarian cancer patients with LVSI information in TCGA dataset to analyze the association of LVSI status with the clinicopathological features, and to determine the risk factors associated with LVSI presence.

HR of each study was extracted directly from the original report. The potential heterogeneity between studies was assessed by the Cochran’s Q-test and expressed by the I2 index. The pooled HR for survival was calculated by fixed-effects model when the I2≤50%. Otherwise, random-effects model was used. Publication bias was assessed by the funnel plot. The impact of publication bias on the pooled HR was evaluated with the trim-and-fill analysis. Moreover, one-way sensitivity analyses and subgroup analyses were performed to assess the stability of the results. When the number of included studies was less than three, one-way sensitivity analysis was not performed. All statistical tests of the meta-analysis were conducted with STATA version 11.0.

Risk factors related to LVSI presence was assessed with binary logistic regression test. Multivariate analysis with logistic regression test was conducted to identify independent risk factors for LVSI presence. The optimal cutoff for SNAI1 and SNAI2 was determined by Youden's index. The cutoff with the biggest Youden's index was chosen as the optimal cutoff. Statistical analysis was conducted using SPSS version 16.0.

This study is sponsored by grants from Shanghai Sailing Program (No. 16YF1401100).