BRAF activated non-coding RNA (BANCR) is often dysregulated in cancer. We performed a meta-analysis to clarify its functions as a prognostic indicator in malignant tumors. We searched the PubMed, Medline, OVID, Cochrane Library, and Web of Science databases to identify BANCR-related studies. Nine original studies and 898 total patients were included in the meta-analysis. Hazard ratios (HR) and 95% confidence intervals (CI) were extracted from the included studies to determine the relationship between BANCR expression and patient overall survival (OS). Odds ratios (OR) were calculated using RevMan 5.3 software to assess associations between BANCR expression and pathological parameters. High BANCR expression correlated with lymph node metastasis (LNM) (OR = 3.41, 95% CI: 1.82–6.37, P = 0.0001), distant metastasis (DM) (OR = 2.98, 95% CI: 1.76–5.07, P < 0.0001), tumor stage (OR = 3.11, 95% CI: 1.89–5.12, Z = 3.25, P < 0.0001), and poor OS (pooled HR = 1.98, 95% CI: 1.20–3.27, P = 0.008) in gastrointestinal (GI) cancer patients, but not in non-GI cancer patients. Our results support the notion that BANCR as a promising prognostic biomarker in Chinese patients with GI cancer.

Long noncoding RNAs (lncRNAs) are transcribed RNA molecules > 200 nucleotides (nt) in length that lack an open reading frame [1]. lncRNAs have important functions in disease, including epigenetic, transcriptional, and posttranscriptional regulation [2]. Recent studies have reported lncRNA dysregulation in various cancer types [3–6]. Some lncRNAs play roles in cancer progression, promoting or inhibiting proliferation, invasion and metastasis [7–8], and many are promising prognostic markers [9]. Approximately 8.2 million people die from malignant tumors and 14.1 million people are diagnosed with cancer worldwide each year [10]. According to the American National Center for Health Statistics, approximately 600 thousand Americans will die of cancer in 2016 [11]. Novel biomarkers, such as lncRNAs, that enhance prognostic accuracy and aid in therapeutic decision-making are essential for improving cancer patient outcomes.

BRAF-activated lncRNA (BANCR), a 693-nt lncRNA encoded on human chromosome 9, was discovered by McCarthy [12] and Flockhart [13] and colleagues in 2012. BANCR is highly expressed in melanoma and promotes melanoma cell migration [12–13]. Evidence suggests that BANCR might play important roles in cancer growth and metastasis [14] and may be a prognostic indicator in certain cancers. However, most studies reported so far have been limited by discrete outcome and sample size. We performed an updated meta-analysis to determine the prognostic value of BANCR in cancer patients.

The detailed BANCR study screening process is shown in Figure 1. Based on inclusion and exclusion criteria, nine studies and 898 patients were included in the meta-analysis (Table 1) [15–23]. An average number of 99.8 subjects were analyzed in each study (range, 54 to 184). All studies were conducted in China and were published between 2014 and 2016. The included studies focused on colorectal cancer (CRC) [15], bladder cancer (BC) [16], gastric cancer (GC) [17], papillary thyroid cancer (PTC) [18], esophageal squamous cell carcinoma (ESCC) [19], osteosarcoma (OSC) [20], retinoblastoma (RB) [21], non-small cell lung cancer (NSCLC) [22], or hepatocellular carcinoma (HCC) [23]. BANCR expression was measured in tumor specimens. Lymph node metastasis (LNM), distant metastasis (DM), and tumor stage assessments depended on individual pathology. The Newcastle-Ottawa Scale (NOS) confirmed that all studies were of good quality (Table 2). 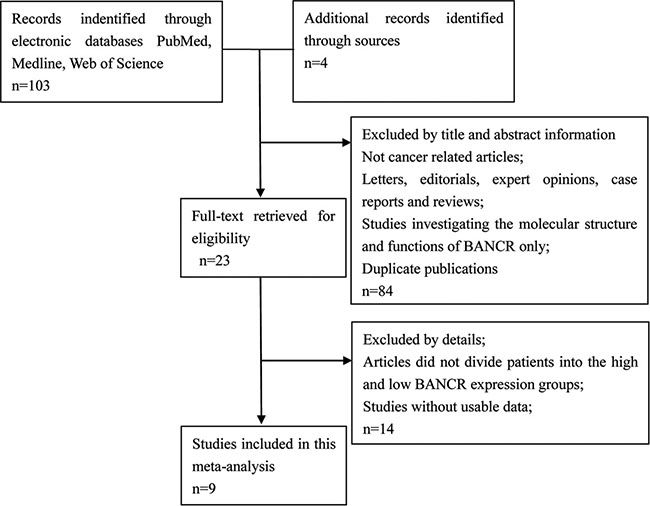 Table 1: Basic characteristics of all studies included in the meta-analysis

Note: The dashes represent no data.

Table 2: Study quality was assessed according to the newcastle-ottawa scale

Notes: The quality of the article is through the number of stars(*). Through the selection and exposure categories, each numbered item gets a star at most. A maximum of two stars can be given for comparability. NA: not available.

Association between BANCR expression and OS

Association between BANCR expression and LNM 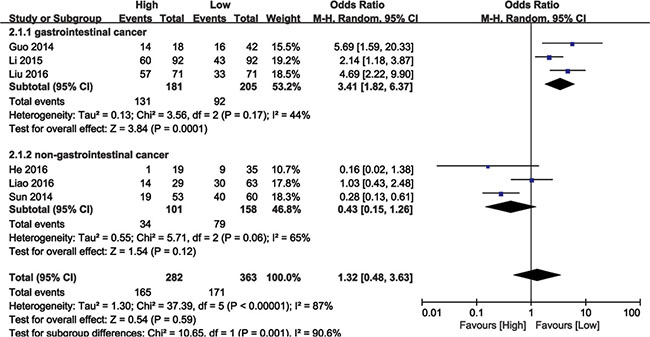 Association between BANCR expression and DM

Analysis of 410 patients from three eligible studies demonstrated association between BANCR levels and cancer patients with DM (Figure 4). Analysis by the fixed effects model showed no significant heterogeneity (I2 = 45%, P = 0.16) and the pooled OR was 2.98 (95% CI: 1.76–5.07, P < 0.0001; high versus low BANCR; Figure 4). As a result, patients with DM clustered in the high BANCR expression group. These results indicated that high BANCR expression predicted increased probability of DM. 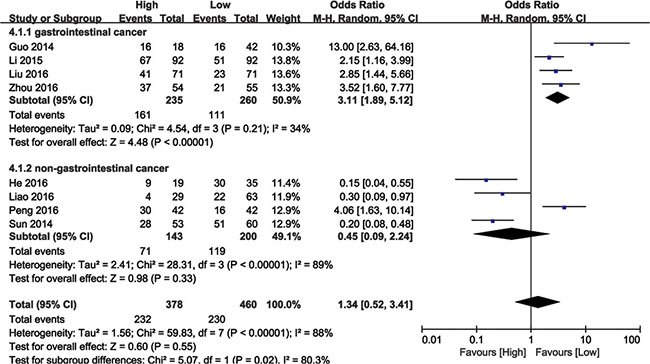 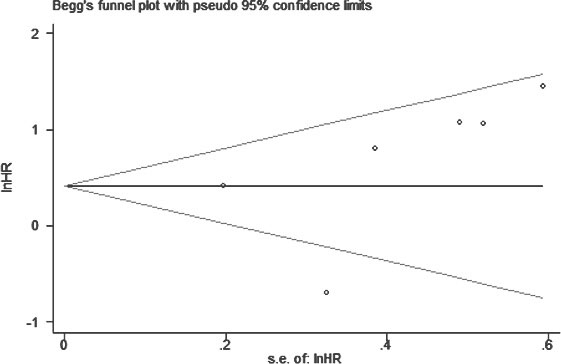 Figure 6: Funnel plot to assess publication bias with respect to the association of BANCR with OS in different cancer types.

Mammalian genome analyses suggest that more than 80% of transcription is associated with lncRNAs [28]. lncRNAs play central roles in the regulation of cell differentiation, development, and proliferation [29]. Due to specific lncRNA associations with tumor development, and their presence in body fluids and tumor tissues, lncRNAs are promising biomarkers for tumor diagnosis and monitoring [30].

BRAF-activated lncRNA (BANCR) was discovered in melanoma, and promotes melanoma cell migration [12]. BANCR appears to be associated with tumorigenesis, and is dysregulated in colorectal, bladder, gastric, papillary thyroid, and lung cancer, and in ESCC, osteosarcoma, and hepatocellular carcinoma [15–23]. However, assessments of the prognostic value of BANCR in cancer patients were contradictory and inconclusive. On one hand, BANCR knockdown inhibited the malignant progression of melanoma, colorectal cancer and osteosarcoma [12, 15, 20, 31]. These studies suggest that BANCR acts as an oncogene to promote tumor growth. However, BANCR may function as a tumor suppressor in lung cancer [22, 32], and conclusions from two papillary thyroid cancer studies were contradictory [15, 33]. Because the role of BANCR as a molecular biomarker in human cancer was unclear, our study explored the prognostic value of BANCR in cancer patients via a meta-analysis.

Certain limitations must be taken into account when interpreting the conclusions of our meta-analysis. First, all studies were from China. Therefore our data may not represent global populations. Second, the included cancer types and patient numbers were small. Third, the criterion for high BANCR expression varied for different studies. Additional studies are needed to confirm the function of BANCR in various cancers.

Two researchers, Yanghua Fan and Shi-Gang Lu, evaluated all included studies and extracted the data independently. Criteria used to include studies in the meta-analysis were as follows: 1) BANCR expression was measured in human tumor tissue, and patients were grouped according to BANCR level; 2) all tumors were confirmed by pathological or histological examinations; 3) studies statistically analyzed patient overall survival or pathological parameters such as LNM, DNM, and tumor stage, with respect to BANCR expression.

Study quality was assessed according to the Newcastle-Ottawa Scale (NOS). Statistical analyses were performed using RevMan version 5.3 software. Heterogeneity among different studies was measured by the Q and I2 tests. A probability value of I2 ≥ 50%, and P < 0.1 indicated significant heterogeneity [36]. A random effects or fixed effects model was used depending on heterogeneity analysis results. If there was significant heterogeneity among the studies, the random-effects model was adopted. Potential publication bias was assessed by the Begg’s funnel plot through Stata 12.0 software. Pooled HRs and ORs were extracted from the published data. When HRs and 95% CIs were not directly reported, survival information was extracted from Kaplan-Meier curves and used to estimate the HR. The log HR and standard error (SE) were used to summarize overall survival outcome [37]. Odds ratios (ORs) and their 95% CIs were used to assess associations between BANCR expression and tumor parameters, including LNM, DM and tumor stage.