Sirtuin Type 1 (Sirt1), a member of sirtuins family, is well known for its deacetylation regulation of cell cycle, energy homeostasis and apoptosis in adipose tissue [1–3]. Sirt1 adipocyte-specific knockout mice present low-grade chronic inflammation along with glucose intolerance and insulin resistance [4]. Our previous study confirms that Sirt1 decreases white adipose inflammation (WAT) via interacting with Akt2 and activating mTOR/S6K pathway [5]. Sirt1 also reduces fat accumulation and improves whole-body energy expenditure in white adipocytes [2, 6]. Interscapular brown adipose tissue (iBAT) is a key organ in the regulation of energy expenditure and thermogenesis [7, 8]. Recent studies show that Sirt1 increases metabolic activity and promotes the brown remodeling of white adipocytes [9–11]. Moreover, Sirt1 deficient exacerbates lower thermogenic activity and aggravates mitochondrial dysfunction in brown adipose tissue of diet-induced obese mice [12]. Further analyses showed a decrease in mitochondrial content associated with lower UCP1 level in the iBAT of Sirt1 deficient mice [12]. This is in line with the strong influence of Sirt1 on PPARα target genes, including UCP1 in iBAT [13, 14]. However, the effects of Sirt1 on brown adipocyte apoptosis have not been established.

In this study, we demonstrated that Sirt1 reduced ER stress-induced apoptosis in brown adipose tissue. Our data showed that Sirt1 functioned through Smad3/ATF4 signal and also physically interacted with ATF4. These results imply that Sirt1 could be used as a new therapeutic means to prevent and treat obesity and type 2 diabetes.

As shown in Figure 1A, body weight was increased after HFD for 9 weeks along with the elevation of food intake (Figure 1A and 1B). HFD treatment reduced the mRNA level of Sirt1 in both inguinal white adipose tissue (iWAT) and interscapular brown adipose tissue (iBAT) (Figure 1C), but did not change the expression of Sirt2 and Sirt3 in iBAT compared with those in iWAT (Figure 1C). We then measured the mRNA levels of UCP1, PRDM16 and PGC1-α in iBAT, data showed HFD significantly inhibited the mRNA levels of these thermogenesis marker genes (Figure 1D). Additionally, our result demonstrated HFD triggered ER stress by increasing the expression of GRP78, Chop, ATF4 and ATF6 but not Caspase3 (Figure 1E). Thus, HFD impaired the function of brown adipose tissue and activated ER stress accompanied with the reduction of Sirt1. 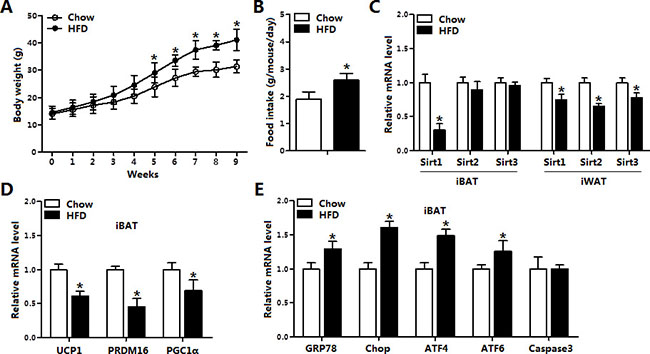 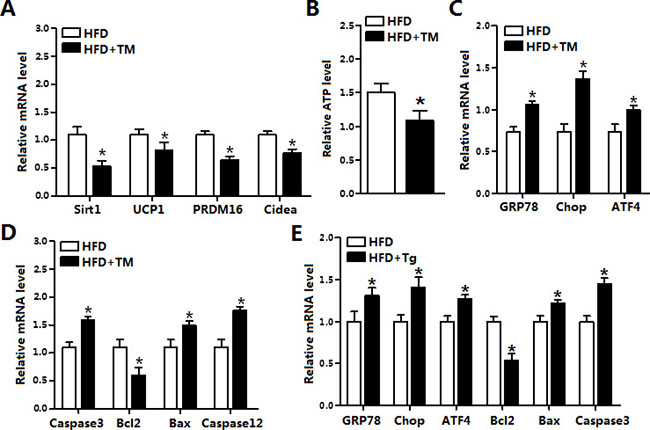 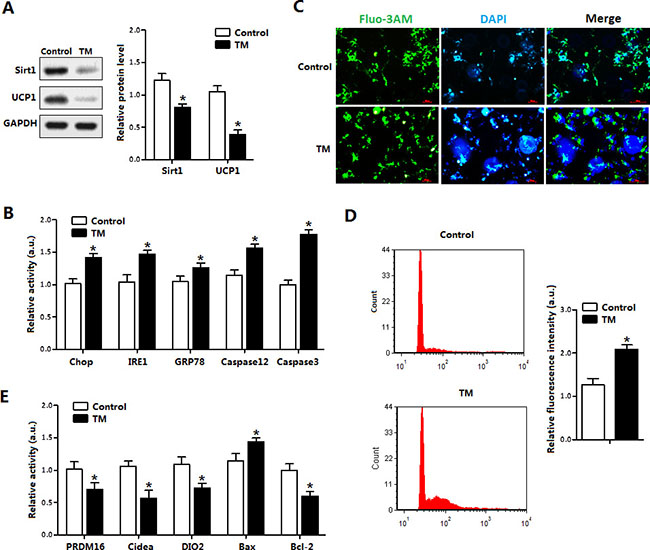 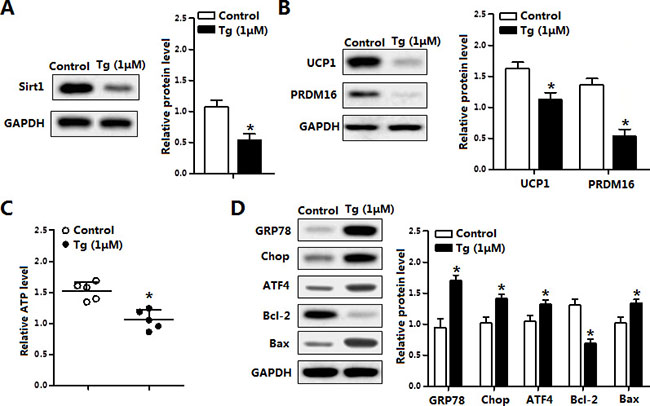 We next addressed whether Sirt1 ameliorated ER stress and apoptosis in mice brown adipocytes. As shown in Figure 5A, cells were infected with the recombinant adenovirus vector of Sirt1 (pAd-Sirt1) led to an increase of Sirt1, but not Sirt2 (Figure 5A); and elevated the cellular ATP level (Figure 5B). pAd-Sirt1 decreased the intracellular Ca2+ level which was elevated under ER stress condition (Figure 5C), suggesting that brown adipocytes apoptosis was reduced. Further Annexin V staining measurement indicated that Sirt1 decreased the apoptotic cells and increased the number of live cells (Figure 5D). Those changes were correlated with the protein reductions of GRP78, Chop and ATF4 (Figure 5E). And the mitochondrial apoptosis marker proteins Bax, Apaf-1 and cleaved-caspase3 were also decreased (Figure 5E). These data collectively suggested that Sirt1 was associated with ER stress and apoptosis of brown adipocytes. 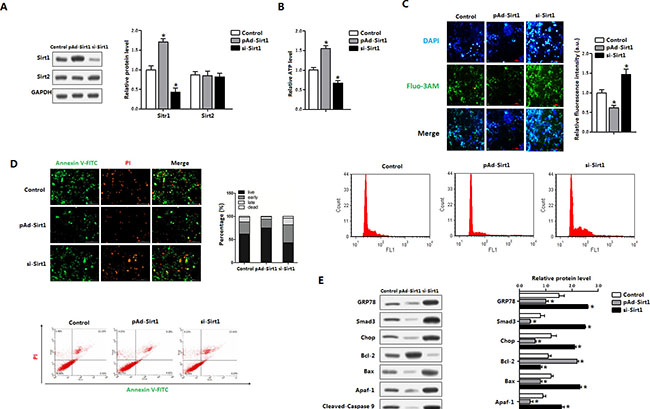 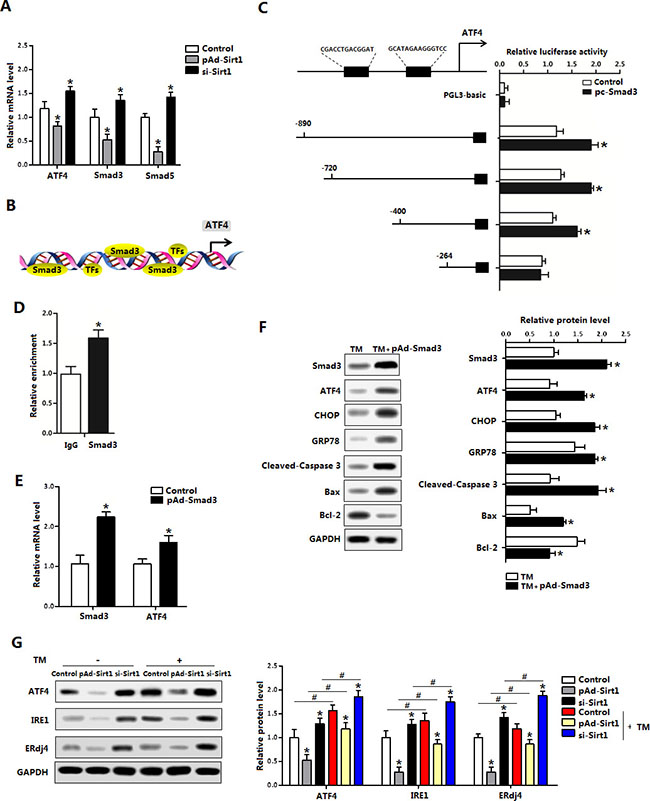 As the mRNA levels of ATF4 and Smad3 were all reduced with Sirt1 treatment (Figure 6A), we next examined whether Sirt1 reduced ER stress by the interaction with ATF4 on protein level. Firstly with the bioinformatics analysis and previous data sheet, we predicted Sirt1 could directly interact with ATF4 (Figure 7A). Then by protein-protein measurement, we found Sirt1 protein interacted strongly with ATF4 in transfected HEK293T cells (Figure 7B). Over-expression of Sirt1 significantly decreased the mRNA levels of Chop and Caspase3 in the brown adipocytes (Figure 7C). The expression of Chop and Caspase3 had no change in the cells treated with Ad-ATF4-mutant; and the co-treatment of pAd-Sirt1 and Ad-ATF4-mutant had no effects on the expression of Chop and Caspase3 either (Figure 7C). In addition, co-treatment of pAd-Sirt1 and Ad-ATF4 attenuated the effects of Ad-ATF4 on ER stress and brown adipocytes apoptosis (Figure 7D). Thus these data suggested Sirt1 directly bind with ATF4, and ATF4 functioned in a Sirt1-dependent manner in the negative regulation of ER stress and apoptosis in brown adipocytes. 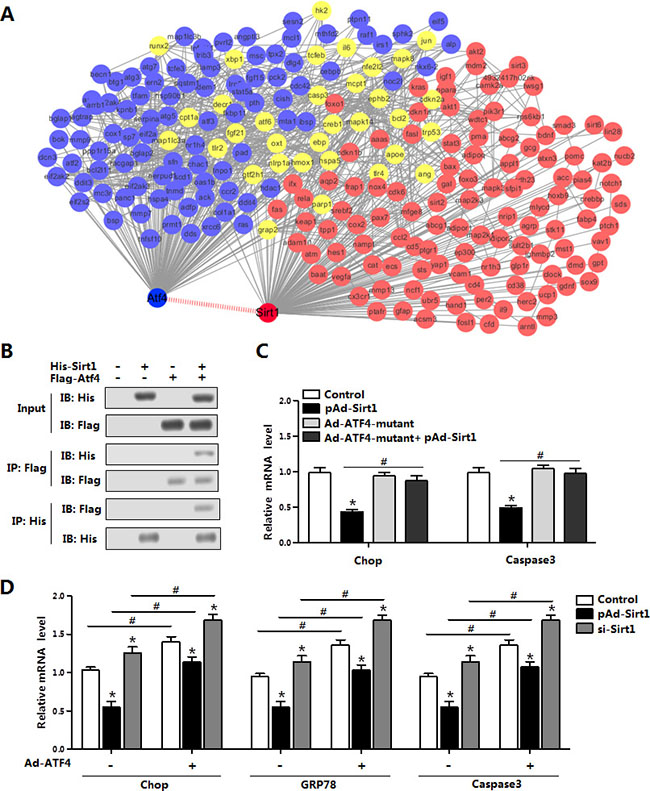 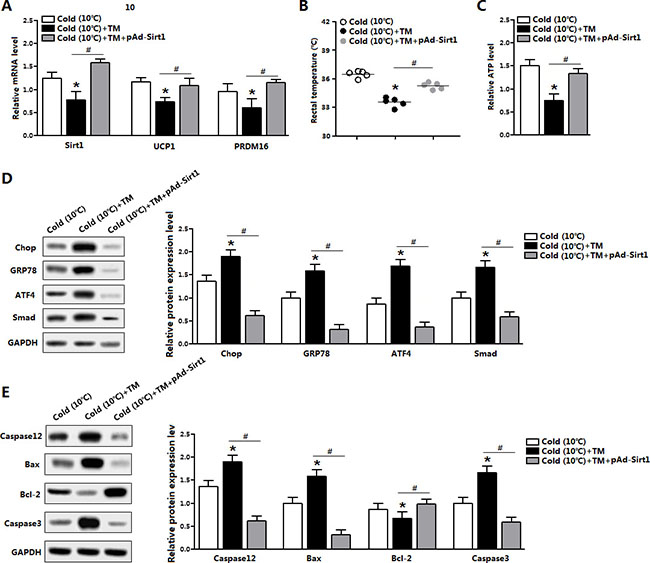 Brown adipose tissue plays important roles in adaptive thermogenesis (nonshivering thermogenesis) for the maintenance of basic body temperature and heat balance energy against cold [21, 22]. Stress-related alterations in endoplasmic reticulum, such as the unfolded protein response (UPR), are associated with obesity [23]. Studies show that UPR can activate IRE1α-XBP1 pathway and upregulate UCP1 in brown adipocytes [24]. Our previous studies also show that regulation of adipose tissue apoptosis has been a potential for treating obesity in decades [25–28]. In this study, we confirmed that TM induced ER stress and apoptosis in mice brown adipose tissue. Our results in this study showed that ER stress reduced Sirt1 mRNA level in brown adipose tissue. These findings are consistent with published reports that demonstrate Sirt1 is closely related with ER stress in adipocytes [13, 29, 30].

The disturbance of intracellular Ca2+ signal has an important role that connection ER stress to mitochondrial functions [31]. A consequent mitochondrial Ca2+ overload causes alterations of the morphology of mitochondria and triggers cell apoptosis [32]. Here our data demonstrate that ER stress caused the disturbance of Ca2+ distribution and triggered apoptosis with increased ATF4 mRNA level in brown adipocyte. Moreover, Sirt1 inhibited ATF4 and eliminated ER stress-induced apoptosis in brown adipocytes. Our results notably revealed the relationships between Sirt1, ER stress and mitochondrial apoptosis in brown adipose tissue, although the interaction between ER and mitochondria has been studied in brown adipose tissue [32, 33]. Moreover, Sirt1 is a crucial regulator of TGF-beta/Smad3 signal [34]. Studies show that up-regulation of Sirt1 deacetylase activity attenuates TGF beta-induced renal fibrosis and hepatocyte apoptosis through inhibiting Smad3 signal [35–37]. Here, we showed that Smad3 bind to the ATF4 promoter region that promoted ATF4 transcription, though few studies imply the relationship of Smad3 and ATF4 [38, 39].

Given the importance of brown adipose tissue for basal thermogenic energy expenditure, we investigated the molecular mechanisms of Sirt1 in the apoptotic responses of brown adipocytes. Thus, our results suggest that Sirt1 directly inhibits brown adipocyte apoptosis by regulating the interaction between ER and mitochondria, and furthermore this inhibitory effect is through reducing the Smad3/ATF4 signal. The role of ATF4, one of the upstream regulators of CHOP and a pro-apoptotic factor during cellular stress, is well documented [40]. It has been found that ATF4 mediates ER stress-induced cell death in tumor cells treated with the chemotherapeutic agents [41, 42]. Notably, we also found that Sirt1 inhibited brown adipocyte apoptosis by directly interaction with ATF4. Consequently, more molecular mechanisms of Sirt1 on brown adipocytes apoptosis warrant further studies.

In summary, we found that Smad3 was a novel transcriptional activator of ATF4 in elevating ER stress and apoptosis of brown adipocytes. Moreover, our data provide compelling evidence that Sirt1 inhibited ER stress-induced brown adipocyte apoptosis through reducing Smad3/ATF4 signal (Figure 9). Our results contribute to further understand of the regulatory mechanisms of adipocyte apoptosis in the development of novel approaches to prevent and treat obesity. 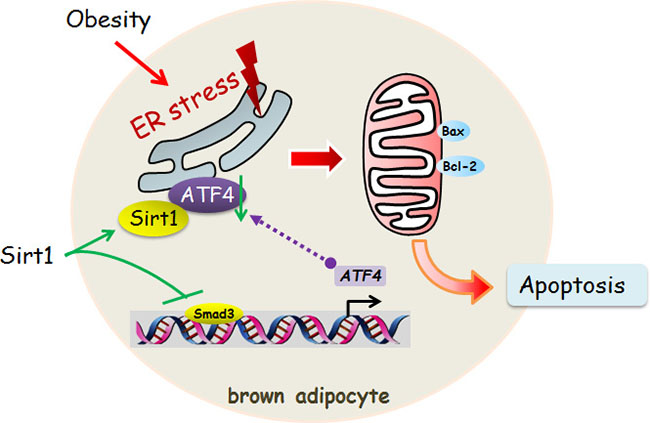 For cold exposure experiment, ten-week-old mice were exposed at 10°C for 2 days; then the recombinant adenovirus vector of Sirt1 (pAd-Sirt1) was intravenous injection for 7 days followed by the intraperitoneal injection of 1 μg/g TM for 3 days. Mice were then euthanized by ethyl ether. The interscapular brown adipose tissue (iBAT) or inguinal white adipose tissue (iWAT) was dissected and used for the following studies.

The intracellular calcium level was measured by using a fluorescent dye Fluo-3 AM (Beyotime Institute of Biotechnology, Nanjing, China) which can across the cell membrane and Fluo-3 formed under canalization by intracellular esterase. Fluo-3 specifically combines Ca2+, generating strong fluorescence with an excitation wavelength at 488 nm. After exposed to TM, pAd-Sirt1 or si-Sirt1, brown adipocytes were harvested and washed twice with PBS, and resuspended in 500 μL Fluo-3 AM (3 μM) for 60 min in dark. Then stained cells with DAPI for 5 min. Fluorescence intensity was measured by BD FACScan (BD Biosciences, Franklin Lakes, NJ, USA), and data were analyzed using Cell Quest software (BD Biosciences). For cellular ATP detection, the luciferase-based ATP-assay from Roche (Mannheim, Germany) was used according to the protocol for users.

HEK293 cells were transfected with plasmids (His-Sirt1 or Flag-Atf4) using X-tremeGEN™ Transfection Reagent (Roche, Switzerland); Cells were then snap-frozen in lipid nitrogen 24 h after transfection. Whole cell lysate was harvested in lysis buffer with protease inhibitor. Cells were then sonicated for 10 sec and the whole cell lysate was pre-clear with Protein A for 2 h and incubated with 2 μg primary antibody overnight at 4°C. Immune complexes were pulled down with Protein A agarose for 2 h at 4 °C with shaking. Beads were washed once with lysis buffer and three times with wash buffer, and then eluted by boiling in SDS sample buffer followed by detection of Western blot.

We appreciated Prof. Shimin Liu from School of Animal Biology, The University of Western Australia to help us improve the English writing.

The authors declare no conflicts of interest associated with this manuscript.

This work was supported by the grants from the Major National Scientific Research Projects (2015CB943102) and the National Nature Science Foundation of China (31572365). We appreciated Prof. Shimin Liu from School of Animal Biology, The University of Western Australia to help us improve the English writing.