Worldwide, breast carcinoma is the most common human malignancy and is the leading cause of cancer-related deaths among women. Approximately 1,676,600 new cases with breast cancer were clinically diagnosed, with an estimated 521,900 deaths occurring in 2012 [1]. Early detection using mammography screening is effective and can decrease mortality from this disease by up to 30% [2]. However, false positive mammograms can result in the over-diagnosis and over-treatment of breast carcinoma with tumor cell dissemination [3, 4]. Therefore, no novel biomarker has yet proven sufficiently sensitive or specific for the early detection and diagnosis of breast cancer in clinical practice.

Epigenetic alterations have been shown to be an early biotic event in human cancers [5, 6]. DNA methylation is a major form of epigenetic modification associated with target gene silencing and is correlated with cancer carcinogenesis and progression [5, 7, 8]. Some genes with aberrant promoter methylation have been identified as prognostic biomarkers in breast cancer (i.e., RASSF1A, BRCA1 and PITX2) [9–11]. 14-3-3 σ, a key member of the 14-3-3 protein family, promotes G2/M arrest and inhibits mitotic death [12]. As a tumor suppressor gene, 14-3-3 σ has been reported to be downregulated in response to DNA methylation in a wide variety of human carcinomas, such as melanoma and ovary, prostate and endometrial carcinomas [13–15]. Studies have shown that 14-3-3 σ is frequently inactivated by promoter methylation in breast cancer [16, 17]. Additionally, DNA methylation has been used as a noninvasive biomarker for cancer detection and diagnosis [18, 19]. 14-3-3 σ promoter methylation in blood samples is a potential tool for the diagnosis of breast cancer [20, 21]. 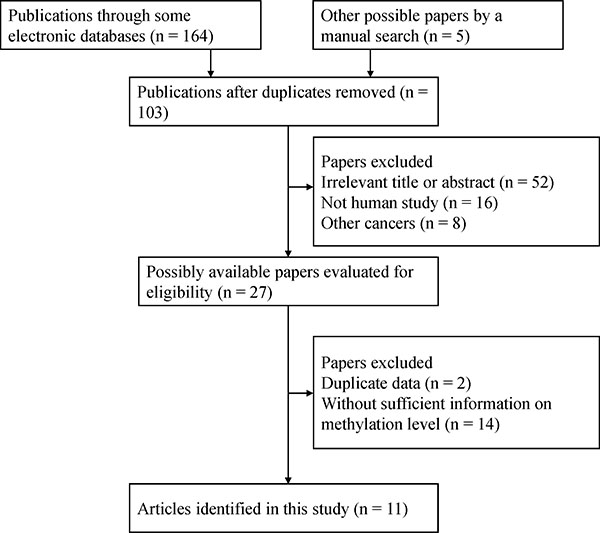 Figure 1: Flow chart of the selection process of the included studies.

Association between 14-3-3 σ promoter methylation and breast cancer in cancer vs. controls 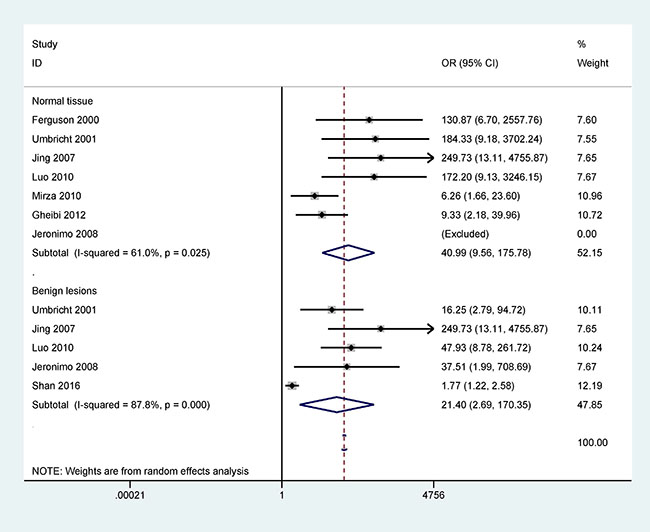 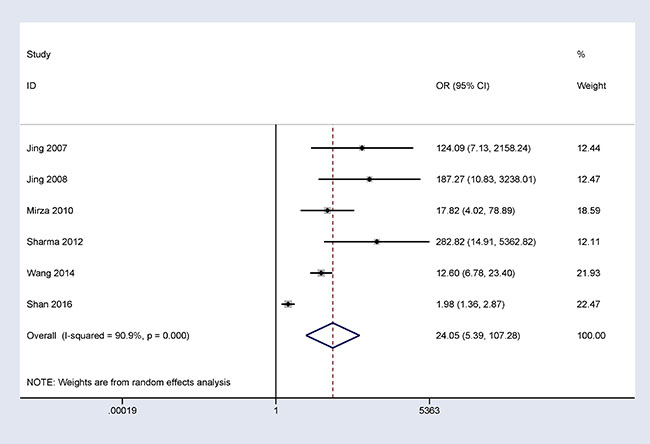 Subgroup analysis by ethnicity in cancer vs. controls 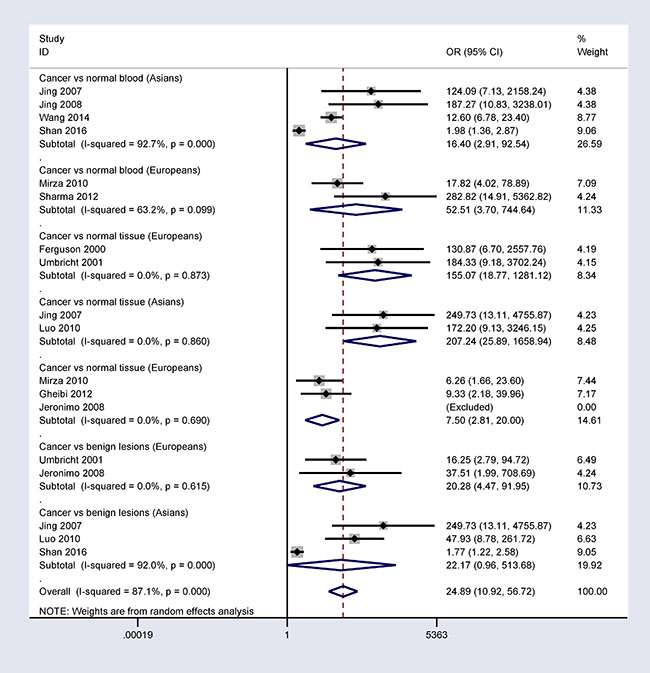 Figure 4: Subgroup analysis by ethnicity in patients with breast cancer vs. controls. 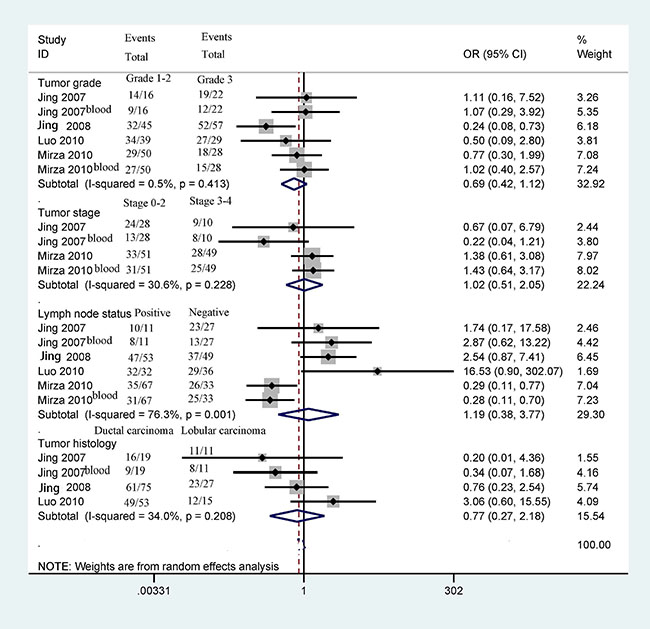 Figure 5: Forest plot of 14-3-3 σ promoter methylation and some clinicopathological features demonstrating the pooled OR from 4 studies, such as tumor grade, clinical stage, lymph node status, and tumor histology (all P > 0.1). 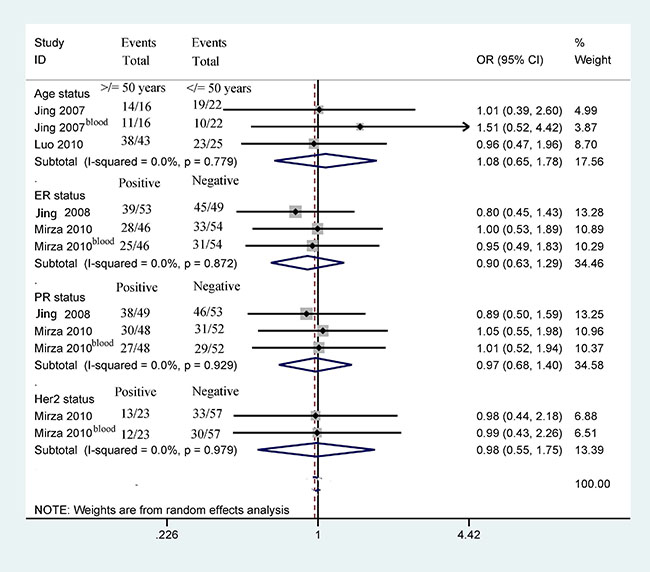 Figure 6: Forest plot of 14-3-3 σ promoter methylation and other clinicopathological features demonstrating the pooled OR from 4 studies, such as age status, ER status, PR status, and Her2 status (all P > 0.1). 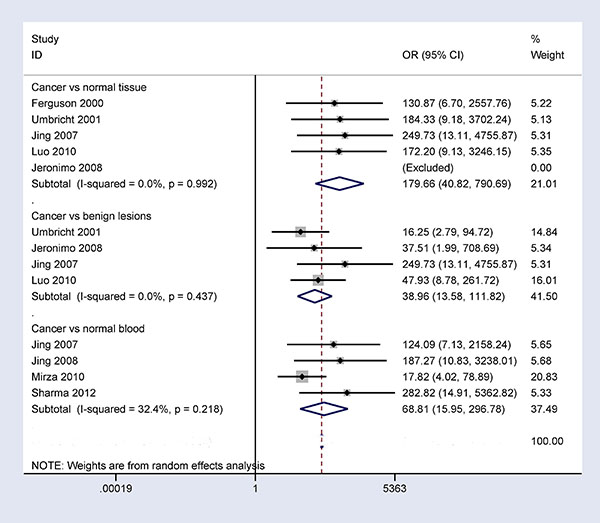 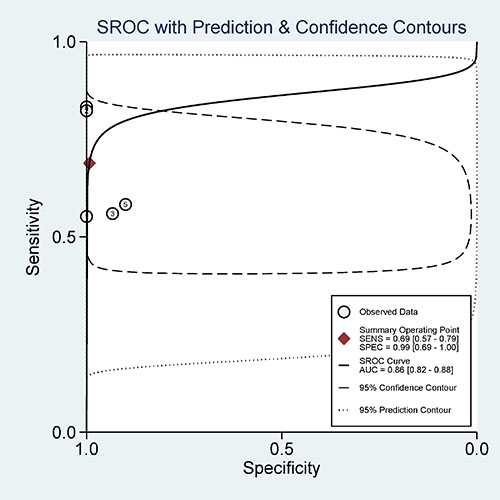 Figure 8: Summary receiver operating characteristics (SROC) estimation for the diagnostic value of 14-3-3 σ promoter methylation based on blood samples in breast cancer vs. healthy subjects; sensitivity = 0.69, specificity = 0.99, and the area under the curve (AUC) = 0.86. 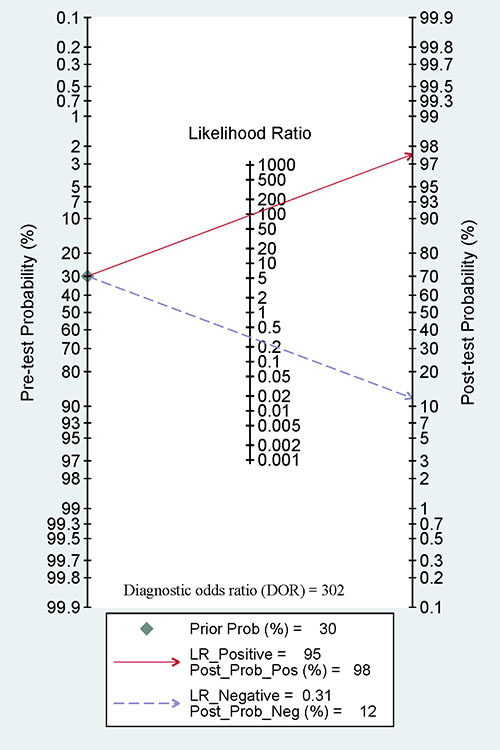 Several limitations existed in this study. First, papers published in English were included in this study; the exclusion of studies written in other languages might have led to selection bias. Second, because the studies on the association between 14-3-3 σ promoter methylation and clinicopathological parameters and overall survival were based on very small sample populations, further studies with larger sample populations are needed. Third, the included studies were case-control design, but not prospective design. Moreover, eligible studies were lack of the detailed stage of patients with breast cancer. Based on the reporting recommendations for tumor marker prognostic studies (REMARK) [41], further multi-center and well-matched prospective studies with large sample sizes (early stage or advanced stage) are very necessary to validate the diagnostic capacity of 14-3-3 σ promoter methylation in breast cancer in the future. Fourth, additional studies using quantitative methods such as quantitative MSP (QMSP) and pyrosequencing are essential. Finally, the detection of methylated SEPT9 DNA was recommended as a noninvasive marker-based blood test for colorectal cancer screening in April 2016 [42], which suggests that gene methylation has a potential value as a noninvasive biomarker for cancer screening and diagnosis.

A range of digital databases including the PubMed, Embase, EBSCO and the Cochrane Library were comprehensively searched to identify potential articles that were published prior to September 10th, 2016. The key words and search terms used were as follows: (14-3-3* OR SFN OR stratifin) AND (mammary OR breast) AND (cancer OR tumor OR neoplasm OR carcinoma) AND (methylation OR epigene*). To obtain other potentially relevant studies, reference lists from the included articles were also carefully scanned.

The following selection criteria for eligible studies were used in this study: 1) the patients were limited to those with primary breast cancer based on histopathology, without restriction regarding sample type; 2) case–control or cohort studies included sufficient data regarding the methylation frequency of the 14-3-3 sigma (σ) promoter in breast cancer, benign lesions, and normal samples; 3) full-text articles published in English were selected in our study; 4) if authors published more than one publication using the same population or overlapping data, only the most complete study with the most data was selected. Papers that did not satisfy the above inclusion criteria were excluded. The detailed characteristics of the included studies were shown in Table 1.

The data were analyzed using Stata statistical software, version 12.0 (Stata Corp, College Station, TX, USA). The overall odds ratios (ORs) with 95% confidence intervals (CIs) were measured to evaluate the strength of the relationship between 14-3-3 σ promoter methylation and breast cancer in cancer vs. benign lesions, normal samples, and clinicopathological features. Data on OS or DFS were extracted from the original studies and were recalculated based on the pooled hazard ratios (HRs) with their 95% confidence intervals (CIs) if possible. The Cochran’s Q statistic and I2 tests were used to estimate potential heterogeneity [43]. The pooled results were calculated using the random-effects model. When significant heterogeneity among studies was observed in the current study (I2 ≥ 50% or P < 0.1), we conducted sensitivity analyses to determine the influence and stability of an individual study on the pooled results based on the omission of a single study [44]. Pooled sensitivity and specificity were commonly used to estimate the diagnostic effect. However, according to the threshold effect, these two traditional values occasionally did not reflect the overall accuracy of the test. Thus, the summary receiver operator characteristic (SROC) curve was constructed, and the area under the SROC curve (AUC) value was used to explore the stability and accuracy of the diagnostic value in a meta-analysis [45, 46]. Fagan nomograms were also used as measures of pre-test probability and post-test probability values in clinical practice [47]. The pooled sensitivity, specificity, AUC, positive likelihood ratios (PLR), negative likelihood ratios (NLR), diagnostic odds ratio (DOR), and post-test probability values using a pre-test probability of 30% were applied and summarized to estimate the diagnostic value of 14-3-3 σ promoter methylation using methylation-specific polymerase chain reaction (MSP) detection in blood samples.

43. Coory MD. Comment on: Heterogeneity in meta-analysis should be expected and appropriately quantified. International journal of epidemiology. 2010; 39:932; author reply 933.