Objectives: The role of body mass index (BMI) in lymphoma survival outcomes is controversial. The prognostic significance of BMI in extranodal natural killer (NK)/T-cell lymphoma (ENKTL) is unclear. We evaluated the prognostic role of BMI in patients with ENKTL.

Conclusions: Higher BMI at the time of diagnosis is associated with improved overall survival in ENKTL. Using the BMI classification may improve the IPI and KPI prognostic models.

Extranodal natural killer (NK)/T-cell lymphoma (ENKTL), nasal type, is very rare in Western countries but is relatively common in Asia [14, 15]. The treatment outcomes of ENKTL are generally poor with 5-year overall survival (OS) rates of less than 50% [14, 16-18]. Although the prognostic value of the International Prognostic Index (IPI) has been well validated in many subtypes of NHL, its prognostic value in ENKTL remains controversial [14, 19, 20]. The prognostic significance of the Korean Prognostic Index (KPI) in ENKTL was recently confirmed by several studies. This model may be improved using other laboratory and clinical parameters (e.g., C-reactive protein, albumin, and BMI) [14, 17, 21].

a Data of EBV-DNA copy number were available for 177 patients and the median value was 1,530 copies/ml.

b Data of serum CRP levels were available for 240 patients and the CRP level > 10 mg/L was used as the cutoff value.

A total of 471 patients (63.5%) received chemotherapy combined with radiotherapy (RT), 179 patients (24.1%) received chemotherapy alone, 74 patients (10.0%) received radiotherapy alone, and 18 patients (2.4%) received only supportive care. Detailed information regarding these treatments and patient responses are listed in Table 2. No significant differences were noted between the low BMI group and high BMI group with respect to treatment modalities (P > 0.05). A total of 540 of the 724 treated patients (74.6%) displayed a complete response (CR) or an unconfirmed complete response (CRu) to their initial treatment. The CR rate was significantly lower in the low BMI group than in the high BMI group (63.4% vs. 77.7%, respectively, P < 0.001). 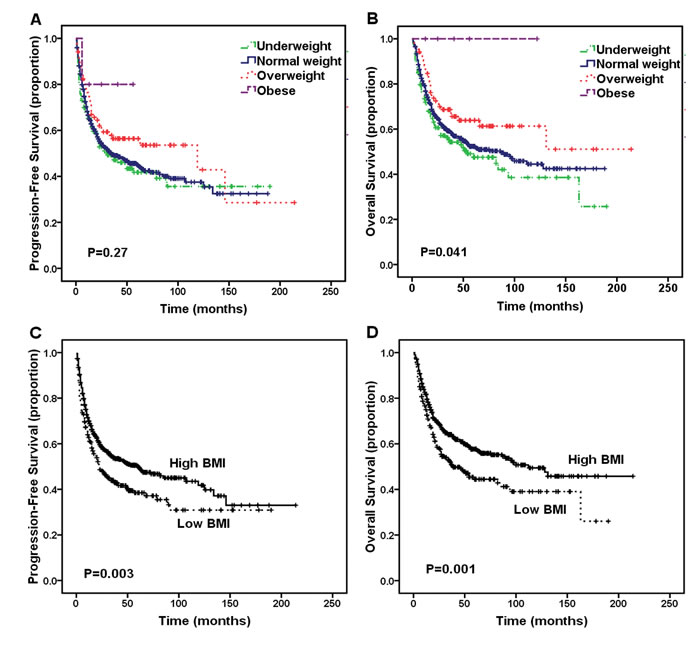 Table 3: Univariate and multivariate analysis of prognostic factors for PFS and OS 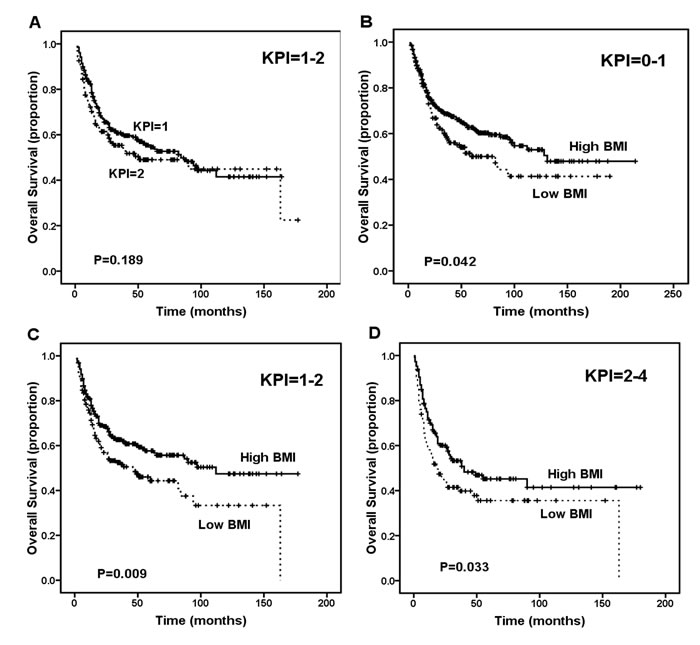 In this study, we found that increased BMI was significantly associated with improved survival outcomes among patients with ENKTL. The association remained significant after adjusting for important baseline prognostic factors or limiting our analysis to patients receiving L-asparaginase-containing chemotherapy. Although the role of BMI in lymphoma prognosis has been intensely studied across different subtypes of the disease, the associations between BMI and ENKTL treatment outcomes remain largely unknown. To the best of our knowledge, this is the first study to assess the prognostic value of BMI in T/NK-cell NHL.

The results of several previous studies examining the impact of BMI on lymphoma patient outcomes were inconsistent, as some studies found that overweight/obesity was associated with worse outcomes [11], while some found no association between overweight/obesity and worse outcomes [13, 24], and others found that it was associated with improved outcomes [6-10]. Hwang et al. found that being underweight or severely obese has a deleterious prognostic impact in DLBCL [25]. Consistent with the findings of several previous studies [6-10], we found that higher BMI is an independent prognostic factor for longer PFS and OS. However, because no studies published in English to date have investigated the prognostic role of BMI in T/NK-cell NHL outcomes, we could not compare our results with published results.

No definitive BMI cutoff values that can be used to predict cancer patient outcomes have been identified. Most authors have used the WHO classification of obesity to distinguish between BMI groups [7, 13, 25, 26]. In contrast, Park et al. [9] and Weiss et al. [10] used dichotomized classification schemes with cutoffs of 20.0 and 25.0 kg/m2, respectively. In the present study, based on the WHO classification, the total cohort was split into four groups of patients with different OS rates. However, the distribution of patients was seriously imbalanced, as only 12.3% of patients were categorized into the overweight/obese group, and almost 70% patients were categorized into the normal weight group. After comparing the prognostic value of the abovementioned BMI cutoffs, we determined that a BMI ≥ 20 was the most discriminatory threshold value and that it was also very similar to the optimal cutoff value identified via ROC analysis. Therefore, we adopted BMI ≥ 20 as the cutoff value in the present study.

We have learned several lessons from the present study. It may be worthwhile to investigate the mechanisms underlying the significant differences in outcomes between low BMI and high BMI ENKTL patients. We hypothesize that these differences may be attributable to several phenomena. Previous studies have found that doxorubicin clearance was reduced in obese patients [27, 28], implying that pharmacokinetic or pharmacodynamic differences between obese and non-obese patients may result in a higher physiologic chemotherapy doses in obese patients. However, in the present study, when survival analysis was restricted to patients receiving anthracycline-containing chemotherapy, the BMI classification failed to demonstrate significant associations between BMI and PFS and OS. In contrast, low BMI had an adverse impact on the treatment outcomes of patients receiving L-asparaginase-containing chemotherapy. There was some potential reason why BMI predicts outcome for L-asparaginase-containing regimens and not others. First, several studies have demonstrated that the ENKTL is generally resistant to anthracyclines but generally sensitive to asparaginase which is widely considered an effective treatment option for ENKTL [17, 29-31]. We speculate that the generally resistance of ENKTL leads to the loss of predictive value of BMI for anthracyclines-containing regimens. Second, we found that low BMI was associated with hypoalbuminemia which may have an important effect on the pharmacokinetics and clearance of chemotherapeutic drugs. Asparaginase can often cause a decrease of serum albumin levels. However, the anthracyclines-containing regimens have little effect on the serum albumin concentration. These may partly explain why body mass index predicts outcome for asparaginase-containing regimens but not anthracyclines-containing regimens. We hypothesized that high BMI patients are exposed to higher cumulative chemotherapy (e.g., doxorubicin, asparaginase and gemcitabine) doses or experience longer periods of drug exposure, resulting in better outcomes. We also hypothesized that low BMI patients may have poor physical stamina, weak immunity due to malnutrition and an increased risk of comorbidities. These patients are also at risk for overdose and chemotherapy-related toxicity [32]. The present study found that patients in the low BMI group were more likely to have hypoalbuminemia, which is the most widely used maker of malnourishment.

These results may have far-reaching consequences with respect to the interpretation and design of clinical trials in the asparaginase era. The 15.2% difference in 5-year overall survival (data not shown) between low BMI and high BMI ENKTL patients who received L-asparaginase-containing chemotherapy reported herein is comparable with those reported in other studies in which asparaginase-containing regimens were used [31]. Depending on their pharmacokinetics, two equipotent drugs or regimens tested in a clinical trial may be associated with significantly different outcomes if groups are unbalanced with respect to BMI. Therefore, we advocate using BMI along with other parameters to ensure appropriate patient stratification, although doing so may increase the complexity of patient stratification.

The present study had several important strengths. First, the cohort was large and comprised patients with a single lymphoma subtype, and the follow-up was both long and comprehensive. Second, because all patients were hospitalized, we were able to collect detailed and important clinical data and calculate BMIs from measured heights and weights rather than self-reported values. Third, large numbers of patients were treated with different regimens at three different centers and were thus managed using a variety of practice patterns, which enhanced the generalizability of our results.

Several potential limitations should also be noted. First, the study was retrospective, and we were unable to examine the effects of several possible confounding factors, such as physical activity or weight gain/loss, during either treatment or follow-up. Second, therapy-related heterogeneity may have confounded the results. Finally, it is conceivable that residual confounding was caused by the presence of unknown or unmeasured variables, such as treatment dose intensities, dose densities and toxicities.

In conclusion, we found that low BMI at the time of diagnosis is an independent adverse prognostic factor in ENKTL patients. Using the BMI classification may improve the IPI and KPI prognostic models.

Written informed consent to draw patient blood samples and to store other medical information in our hospital database was obtained from all patients, who also provided consent to participate in this study. This study was approved by the Institutional Review Board of the National Cancer Institute and the ethics committees of Sun Yat-Sen University Cancer Center, Hunan Cancer Hospital and the Second Xiangya Hospital of Central South University. This study was performed in accordance with the Declaration of Helsinki and the institutional guidelines of the abovementioned local ethics committees.

We performed a triple-center retrospective study of 742 consecutive patients with newly diagnosed ENKTL, nasal type, at the following three cancer centers: Sun Yat-Sen University Cancer Center, Hunan Cancer Hospital and the Second Xiangya Hospital of Central South University between January 1998 and June 2015. The following patients were included in this study: (a) patients with a pathologically confirmed diagnosis of ENKTL, nasal type, according to the WHO classification [33]; (b) patients without a previous history of malignancy or anti-cancer treatment or a second primary tumor; (c) patients with available height and weight data at the time of diagnosis; and (d) patients with adequate clinical, laboratory, and follow-up data. Patients with blastic NK-cell lymphoma/leukemia, aggressive NK-cell lymphoma/leukemia, or peripheral T-cell lymphoma, unspecified, were excluded.

All pathological specimens were reviewed and reclassified via central review, in accordance with the WHO criteria for pathological diagnosis. Antibodies to the following antigens were used for immunophenotype analysis: CD3, CD56, TIA-1, Gram-B, CD45RO, CD20, CD79a, CD30, Ki67, and anaplastic large cell lymphoma kinase. In situ hybridization was used to detect EBV-encoded RNA.

BMI was calculated as weight measured in kilograms divided by the square of height measured in meters (kg/m2). Consistently recorded height data from any clinical history time point were considered accurate. Weight at diagnosis was defined as the weight measured closest to and no earlier than 1 month before the ENKTL diagnosis date. Patients were stratified according to the World Health Organization (WHO) international BMI classification as follows: underweight (BMI < 18.5), normal weight (BMI ≥ 18.5 to < 25), overweight (BMI ≥ 25 to < 30), and obese (BMI ≥ 30). Patients were also stratified according to the indicated 2-sided (BMI < or ≥ 20) classification.

Each 96-well plate included triplicate samples run in parallel with the EBV-DNA plasmid standard curve dilutions. The BamHI-W standard curve spanned 5-logs comprising serial 10-fold dilutions, containing 100-104 copies of EBV-DNA plasmid target per well. EBV-negative healthy volunteers were used as negative controls, and a no template control was run on each plate as a blank control.

The 25-μL real-time quantitative RT-PCR reaction mixture contained 2μL EBV DNA plasmid or plasma DNA sample, 12.5 μL Premix Gold buffer containing deoxynucleotide triphosphates, 5 pmol forward primer, 5 pmol reverse primer, and 2.5 pmol of the probe, as previously described, in addition to 1.5 U TaqGold and deionized H2O. The quantitative RT-PCR assay was performed over 45 cycles of 93°C for 3 minutes, 93°C for 30 seconds, and 55°C for 45 seconds on the ABI 7500 Fast Real-Time PCR System (Applied Biosystems), according to the manufacturer’s instructions. Fluorescence data were collected in real-time and analyzed using the Sequence Detection System Version 1.9 software. The results were expressed as the number of copies of EBV per milliliter of plasma. Samples showing fluorescence signals lower than the signal in the 101 standard were outside the linear range of the assay and considered to be negative.