* These authors have contributed eqally to this work

Objectives: To validate 99mTc-labeled arginylglycylaspartic acid (99mTc-3PRGD2) scintigraphy as a means to image synovial neoangiogenesis in joints afflicted by rheumatoid arthritis and to investigate its potential in the early detection and management of rheumatoid arthritis.

Conclusions: Our findings indicate that 99mTc-3PRGD2 scintigraphy could detect early rheumatoid arthritis by imaging the associated synovial neoangiogenesis, and may be useful in disease management.

Rheumatoid arthritis is a systemic autoimmune disease of unknown etiology which is characterized by chronic, symmetrical and erosive joint destruction. Patients with rheumatoid arthritis can develop serious joint deformities and loss of function resulting in serious disability and mortality [1]. Rheumatoid arthritis not only affects the patients’ quality of life, it also imposes a heavy financial burden on society. Currently, there are few effective therapies that can fully reverse the existing joint damage. Joint destruction can occur from 4 months to 1 year after the onset of disease, making early diagnosis and treatment vital [2]. However, imaging techniques that would allow the early detection of rheumatoid arthritis are not yet well established.

Although it is absent in other forms of arthritis, pannus formation is the most basic and important pathological feature of rheumatoid arthritis, leading to progressive cartilage destruction, bony erosion and remodeling, and hence to joint deformity and loss of function [3]. Angiogenesis is an essential feature of pannus [4], occurring as an early event in disease progression [5]. If the onset of angiogenesis can be detected, then the early diagnosis of rheumatoid arthritis may be possible, with the prospect of dramatic improvements in the clinical outcome [6].

Recent studies have shown that ligand binding to members of the integrin family of receptors plays an important role in the pathogenesis of rheumatoid arthritis [7]. In rheumatoid arthritis, αvβ3 is overexpressed in synovial tissues, though it is only minimally present in the synovium of normal joints, and osteoarthritis is not associated with increased αvβ3 [8]. αvβ3 is highly expressed on the surface of proliferating vascular endothelial cells, neovasucular endothelial cells, osteoblasts, osteoclasts, some neutrophils and cancer cells, but is rarely expressed in existing vessels, normal tissues or dormant vascular endothelial cells [9]. αvβ3 is highly expressed not only in the synoviocytes and chondrocytes of rheumatoid arthritis, but also in the osteoclasts of bone injury sites [10]. Activation of osteoclast αvβ3 regulates bone reabsorption [11].

One hundreds rats were injected with collagen to induce rheumatoid arthritis; of these 6 died before the observations were complete and were excluded from further analysis. Symptoms of arthritis appeared as early as 17 days after primary immunization and reached a peak by 25 days. 58 rats developed rheumatoid arthritis, a take rate of 62% (58/94), in agreement with a previous report [20]. Figure 1 shows swelling of the ankles and toes in a treated rat 15 days after primary immunization. H&E staining revealed narrowing of the joint cavity, with elevated CD31 and αvβ3 expression in synovial tissue compared to the control. Weight gain following immunization was significantly delayed compared to control rats (data not shown). 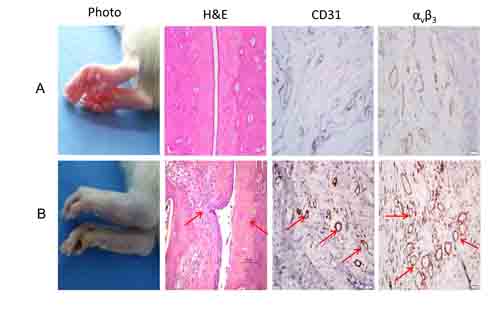 99mTc-3PRGD2 and 99mTc-MDP were compared as imaging agents in 5 diseased and 5 control rats. As shown in Figure 2 and Supplemental Figure 1, significantly higher 99mTc-3PRGD2 uptake was observed in the rheumatoid (0.57±0.18) compared to the disease-free joints (0.21±0.06, P < 0.01); uptake is quantified as the ratio of activity in the joint relative to the mediastinum. However, 99mTc-MDP imaging could not distinguish between diseased and healthy joints. Immunohistochemical staining revealed increased CD31 and αvβ3 in diseased joints compared to controls (Figure 3). H&E staining revealed heavy infiltration of inflammatory cells in the lesion synovium and cartilage damage in the rheumatoid arthritic joint (Figure 3). We also obtained 99mTc-3PRGD2 images of rats with osteoarthritis. 99mTc-3PRGD2 accumulation in osteoarthritic joints (0.24±0.05) was not significantly different from that in normal joints (Suppl. Figure 2), and αvβ3 and CD31 staining was similar to untreated rats (Suppl. Figure 2). 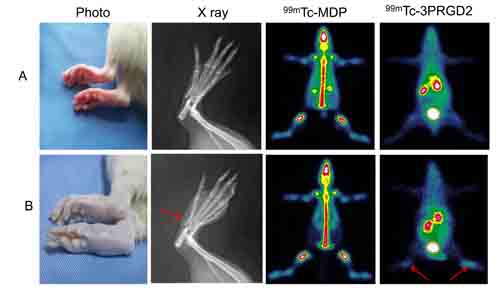 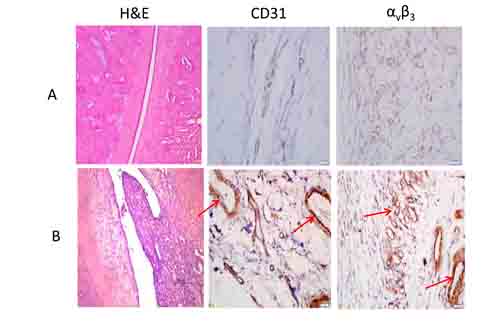 Figure 3: Histological changes matched to 99mTc-3PRGD2 imaging. A. Control; B. Rat with rheumatoid arthritis. Images are obtained from the animals scanned in Figure 2. Regions of intense CD31 and αvβ3 staining are indicated by arrows. Magnification: × 200.

Serial 99mTc-3PRGD2 SPECT scans were conducted in 20 collagen-immunized rats, of which 13 developed pathologically-confirmed rheumatoid arthritis and were included in the report. Images were obtained before, 15 days and 30 days after immunization. A representative SPECT image is shown in Figure 4, along with the matched X-ray. Tracer uptake in the joints increased with time, being 0.41 ± 0.23 on day 15 and 0.51 ± 0.18 on day 30, significantly higher than pre-immunization status (0.22±0.19, P < 0.01). Separate sets of imaging were also presented to support the findings (Suppl. Figure 3-6) 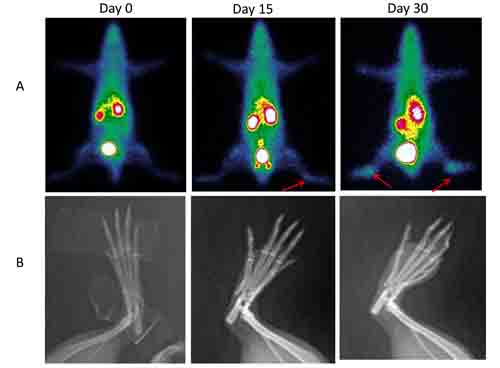 Figure 4: Temporal changes in rheumatoid arthritis monitored by serial 99mTc-3PRGD2 and X-ray imaging. A. 99mTc-3PRGD2 scintigraphy prior to, and 15 and 30 days after immunization Arrow indicates increased joint uptake. B. Matched X-ray images.

A group of 40 rheumatoid arthritis rats received bevacizumab therapy: as shown in Figure 5, this resulted in a dramatic reduction of 99mTc-3PRGD2 uptake in the joints. Overall 99mTc-3PRGD2 joint activity decreased from 0.53 ± 0.22 to 0.22 ± 0.02 (P < 0.01) accompanied with a significant improvement in symptoms. A full report on bevacizumab as a therapeutic option will be presented elsewhere. 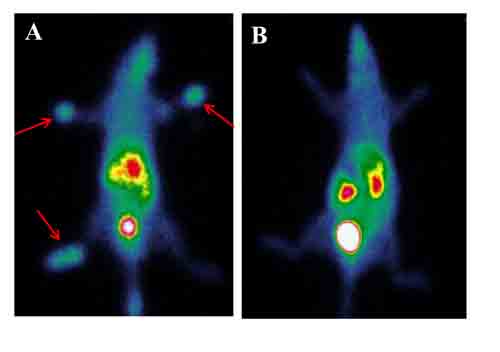 99mTc-3PRGD2 imaging was also performed in a female patient with rheumatoid arthritis and a healthy volunteer. Abnormally high 99mTc-3PRGD2 accumulation was observed in multiple hand joints of the patient compared to the volunteer (Figure 6).

Rheumatoid arthritis is a common chronic inflammatory disease characterized by damage of bones and joints. The infiltration of inflammatory cells, pannus formation and angiogenesis are the early specific pathological changes [21]. We used type II collagen immunization of Sprague Dawley rats to establish a model of rheumatoid arthritis. The clinical manifestation, pathological and immunological changes found in this model are similar to those in humans [22-24].

Of note, only 62% rats developed rheumatoid arthritis after type II collagen immunization. Of the 20 rats assigned to the serial imaging study, 7 did not develop disease over the time of the experiment, and in these animals 99mTc-3PRGD2 uptake was not significantly different from the controls (data not shown).

In the early stage of rheumatoid arthritis in rats, there is no bone destruction, which limited the power of X-ray imaging for early disease detection. 99mTc-MDP bone scan has been frequently used for bone and joint diseases, but our findings indicate that 99mTc-MDP may not be useful for rheumatoid arthritis (Figure 2). 99mTc-3PRGD2 scintigraphy was clearly superior to other convenient imaging modalities, and its success in imaging arthritis in a patient is a further positive result.

99mTc-3PRGD2 is an imaging agent that enables the early detection of synovial neoangiogenesis in an experimental model of rheumatoid arthritis and hence may be useful in the clinic for managing treatment of the disease.

All experiments were performed using 8-week-old female Sprague Dawley rats (body weight 180~200g, purchased from Beijing Vital River Laboratory Animal Technology). A total of 140 rats were purchased, maintained and used according to institutional guidelines. The experimental protocol was approved by the Institutional Animal Care and Use Committee of Inner Mongolia Medical University. Animals were housed 2 per cage and kept in the institutional animal facility at a constant temperature and humidity. Food pellets and water were provided ad libitum.

Observation of general conditions of rats

3PRGD2 (Isotopic Laboratory Peking University) was labeled with 99mTcO4- eluted from an in-house 99Molybdenum-99mTechnetium generator (China Institute of Atomic Energy) as previous described [17]. Briefly, 99mTcO4- solution was added to a vial containing 3PRGD2 solids with frequent vigorous shaking for complete dissolution. The vial was incubated in a water bath at 100oC for 20 minutes and then cooled at room temperature. The radiochemical purity of 99mTc-3PRGD2 was always greater than 95%.

99mTc-3PRGD2 scintigraphy was performed one day before and 15 and 30 days after the first type II collagen immunization. Scintigraphy was accomplished with a dual-head detector SPECT/CT (Millennium VG, Hawkeye; GE Healthcare) equipped with low-energy and high-resolution collimators (peak energy 140 keV, window width 20%). Approximately 1 hour after 99mTc-3PRGD2 (11.1MBq/kg) injection via the caudal vein, animals were anesthetized by inhalation of 1.5 % isoflurane-air mixture. A 6 minute planar scan was conducted and SPECT data was acquired into a 128 × 128 matrix. 99mTc-3PRGD2 images of rheumatoid arthritis, osteoarthritic and disease-free rats were acquired. 99mTc-Methyl diphosphonate (MDP) bone scans were acquired in the same rheumatoid arthritic rats 2 days later. 99mTc-MDP (11.1MBq/kg) was imaged using the same protocol as 99mTc-3PRGD2 imaging.

99mTc-3PRGD2 whole body scans were performed in a heathy volunteer and a patient with rheumatoid arthritis. The human studies were approved by the Institutional Review Board of Inner Mongolia Medical University and the local ethics committee. Written consent was obtained from the patient and the volunteer.

The images were processed using a post-processing system workstation. Tracer uptake in the joints was expressed semi-quantitatively as the ratio of activity in the limb joints to the mediastinum. Images were read by two board certified nuclear medicine physicians who were blinded to the pathologic findings. In case of disagreement, a third nuclear medicine physician made a diagnostic conclusion.

Rats were given an X-ray exam immediately after each SPECT scan while still under anesthesia. Images were interpreted by board certified radiologists who were familiar with rat anatomy and blinded to the final pathologic findings. The assessment included peri-articular soft tissue swelling, articular surface smoothness and joint space narrowness.

Animals were sacrificed by carbon dioxide. The knee, ankle and paw joints were harvested and fixed in 10% phosphate-buffered formalin for 48 hours. Bones were decalcified in 8% EDTA solution. Fixed and decalcified specimens were processed and 4 µm paraffin sections were cut with a Leica RM2135 microtome (Leica) for staining with hematoxylin, eosin and toluidine blue. Scoring of synovium pathological appearance was done by two skilled pathologists who observed the synovial hyperplasia, inflammatory cell infiltration, pannus formation and damage to bone or cartilage. CD31 and αvβ3 immunohistochemical test kits (Beijing Bioss Biotechnology Co.) were used according to the manufacturer’s instructions [18, 19].

99mTc-3PRGD2 uptake was expressed as mean ± standard deviation. Statistical significance was examined by a 2-tailed Student’s t test. A p value of less than 0.05 was considered as statistically significant.

There is no conflicts of interest .