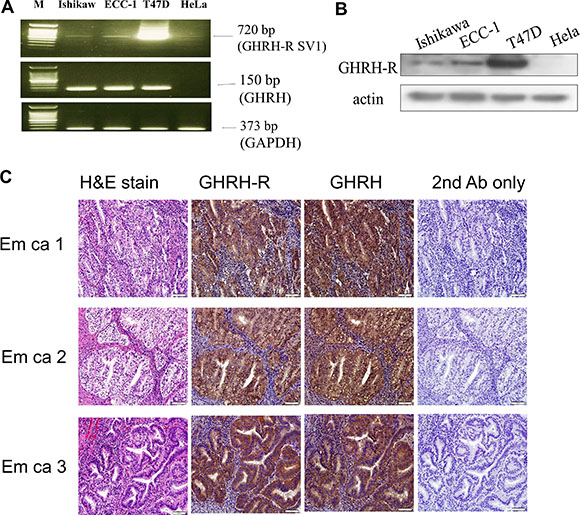 To examine whether GHRH-R is involved in regulation of human endometrial cancer cell migration and invasion, Ishikawa and ECC-1 were treated with a GHRH antagonist, MIA-602. As shown in Figure 2A, treatment with MIA-602 (1 nM-10 μM) significantly inhibited the cell migration in a dose-dependent manner in both Ishikawa and ECC-1 cells. In addition, invasion assay results showed that treatment with MIA-602 also inhibited the cell invasion of Ishikawa and ECC-1 cells in a dose-dependent manner (Figure 2B). Taken together, these results clearly indicated that GHRH antagonist exhibited an inhibitory effect on the cell migration and invasion in human endometrial cancer. 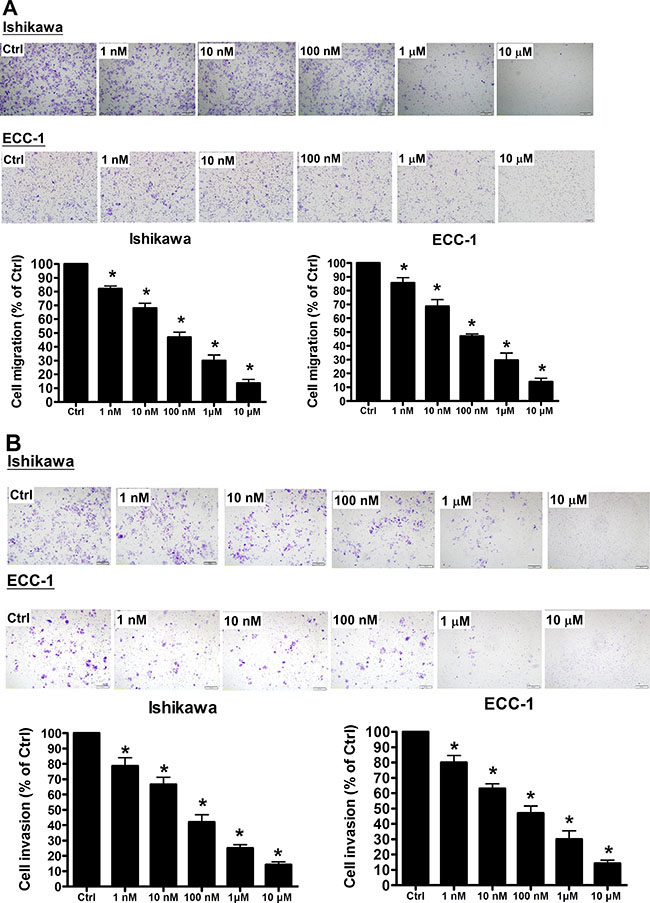 Figure 2: GHRH antagonist inhibits endometrial cancer cell migration and invasion. (A) Using the Transwell migration assay, the migration and invasion capability of endometrial cancer cells was assessed. The GHRH antagonist suppressed the migration of endometrial cancer cells through an uncoated porous filter in a dose-dependent manner at concentrations of 1 nM to 10 μM, with a maximal effect at 10 μM. (B) Endometrial cancer cells were seeded onto a Matrigel-pre-coated filter in Transwell chambers in the presence or absence of increasing concentrations of GHRH antagonist (1 nM to 10 μM, as indicated). After 24 (migration) and 48 (invasion) h of incubation, cells on the upper side of the filter were removed, and the cells that migrated or invaded were fixed, stained, and counted. On the left, representative pictures are shown. In the columns, the mean number of migrated or invaded cells in five fields of triplicate wells from three independent experiments is presented. Bars, SD; *p < 0.05, versus control. 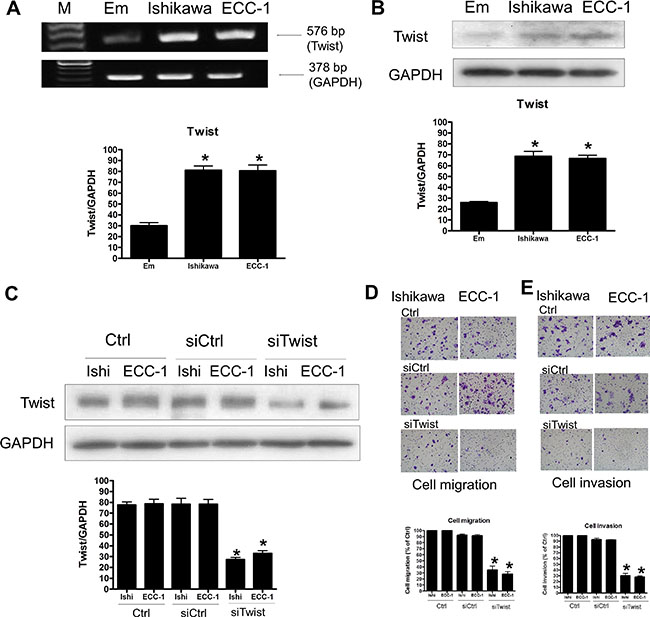 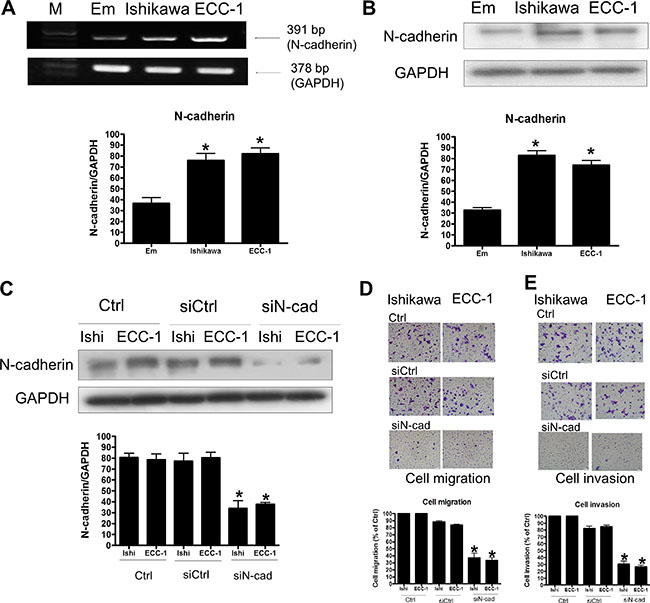 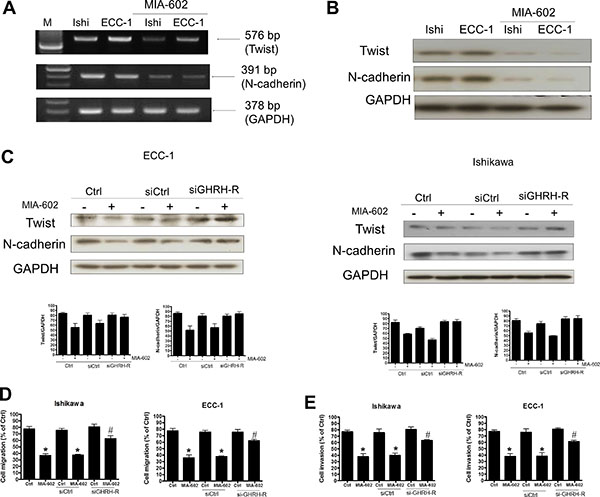 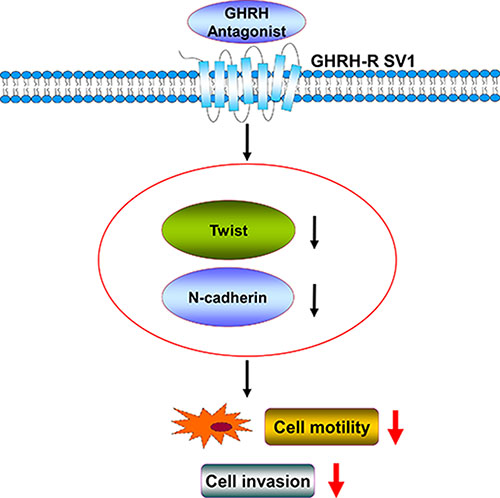 Figure 6: The proposed signaling pathways involved in GHRH antagonist–inhibited invasion and migration of human endometrial cancer cells by down-regulating Twist and N-cadherin expression. GHRH antagonist suppresses the invasion and migration of endometrial cancer cells through binding of GHRH receptors and suppression of the Twist and N-cadherin pathways.

The human endometrial cancer cell lines Ishikawa and ECC-1 were utilized in this study. The human endometrial cancer cell line Ishikawa is a well-differentiated endometrial adenocarcinoma cell line [29]. The ECC-1 cell line, derived from a well-differentiated adenocarcinoma of the endometrium [30], was obtained from the American Type Culture Collection (USA). The cells were cultured in Dulbecco’s minimum essential medium (DMEM) with 10% fetal bovine serum (FBS; Hyclone Laboratories Inc., Logan, UT), 100 U/ml penicillin, and 100 μg/ml streptomycin and incubated at 37°C in a humidified incubator with 5% CO2. The cells were grown to 80% confluence and transferred to serum-free medium for 24 h prior to treatment with the GHRH antagonist.

The GHRH antagonist, MIA-602, was synthesized in the US laboratory of A.V.S. by solid-phase methodology using Boc-chemistry as previously described [4, 31]. MIA-602 has the sequence: [(PhAc-Ada)0-Tyr1, D-Arg2, Fpa56, Ala8, Har9, Tyr(Me)10, His11, Orn12, Abu15, His20, Orn21, Nle27, D-Arg28, and Har29] hGHRH(1–29)NH2, where Ada is 12-aminododecanoic acid, Fpa5 is pentafluoro-phenylalanine, Orn is ornithine, Har is homoarginine, Nle is norleucine, PhAc is phenylacetyl, and Tyr(Me) is O-methyl-Tyr. For use, stock solutions of MIA-602 were dissolved in dimethyl sulfoxide (DMSO) at a concentration of 1 μM. The concentration of DMSO after dilution in the incubation medium was low (< 0.1%) to avoid any DMSO influence on cell culture.

To determine the expression of the GHRH-R and GHRH proteins in human endometrial cancer, IHC was performed on sections of human endometrial cancer tissue using previously reported procedures [32]. The involvement of human subjects in this study was approved by the Institutional Review Board of Chang Gung Memorial Hospital (CGMH-IRB numbers 101-2187B and 100–3879C). Four-micrometer-thick formalin-fixed, paraffin-embedded (FFPE) tissue sections were deparaffinized in xylene and rehydrated with a graded series of ethanol solutions. The sections were then stained with anti-human GHRH-R and GHRH polyclonal antibodies (Abcam, 1:100) using an automated IHC stainer with the Ventana Basic DAB Detection kit (Tucson, AZ) according to the manufacturer’s protocol. Counterstaining was performed with hematoxylin. Sections were stained without the GHRH-R and GHRH antibodies as a negative control in the fourth of four columns depicting the human endometrial cancer tissue sections.

Migration and invasion assays were performed in Boyden chambers with minor modifications. Cell culture inserts (24 -well, 8 μm pore size; BD Biosciences, Mississauga, ON) were seeded with 1 × 105 cells in 250 μl of medium with 0.1% FBS. Un-coated inserts were used for the migration assays, whereas inserts pre-coated with growth factor-reduced Matrigel (40 μl, 1 mg/ml; BD Biosciences) were used for invasion assays. Medium with 10% FBS (750 μl) was added to the lower chamber and served as a chemotactic agent. After 24 h (migration) or 48 h (invasion) incubation, non-migrating/invading cells were wiped from the upper side of the membrane and cells on the lower side were fixed in cold methanol (−20°C) and air dried. In these assays, the cells that had not penetrated the filter were removed by wiping, and the cells that had invaded the lower surface of the filter were fixed with ice-cold methanol and stained with 0.5% crystal violet.

DNA (cDNA) was synthesized from 2 μg of total RNA by reverse transcription (RT) (Amersham Biosciences, Baie d’Urfe’, Quebec, Canada). The synthesized cDNA was used as a template for PCR amplification. To investigate the presence of GHRH-R SVs and to improve the specificity and sensitivity of amplification, nested PCR was performed as described previously [6, 33].

The results are presented as the mean ± SEM of at least three independent experiments. GraphPad Prism software was used for statistical analysis. Multiple comparisons were analyzed by one-way ANOVA followed by Tukey’s multiple comparison tests. A significant difference was defined as p < 0.05.

The authors acknowledge H.-L. Chen, W-R Qui, and A. Chao at the Gynecological and Obstetrics Laboratory, Chang Gung Memorial Hospital, and JC Cheng at the Department of Obstetrics and Gynecology, University of British Columbia, Vancouver, British Columbia, Canada for their technical assistance in this study.

HMW, HSW, and PCKL performed the experiments, interpreted the results and prepared the manuscript. HMW, HSW, HYH, AVS, AC, HHC, and PCKL contributed to the scientific discussion and manuscript editing. HSW and PCKL supervised in the design of the study and finalized the manuscript. All authors read and approved the final manuscript.