Methods and Materials: Between January 2003 and June 2013, we evaluated data on 425 patients with nonmetastatic UTUC (Ta-4N0/+M0) who underwent radical nephroureterectomy at our institution. Low pre-albumin level was defined as <20 mg/dl, while hypoalbuminemia was defined as albumin <35 g/L. The associations of preoperative low pre-albumin level and hypoalbuminemia with clinical and pathologic variables were assessed. Univariable and multivariable analyses using the Cox regression model were performed to determine prognostic factors that were associated with cancer specific survival (CSS) and overall survival (OS). The Harrell concordance index with variables only or combined pre-albumin data were used to evaluate the prognostic accuracy.

Results: Compared with patients with high pre-albumin level, patients with low pre-albumin level were more likely to have older age, higher tumor stage, higher rate of diabetes, regional lymph node metastasis and lymphovascular invasion. Meanwhile, hypoalbuminemia was only associated with diabetes. Multivariate analysis identiﬁed decreased preoperative pre-albumin level as an independent prognostic factor for CSS (HR 1.85, 95% CI 1.14-3.00, p=0.013) and OS (HR 1.73, 95% CI 1.12-2.70, p=0.015), but not preoperative hypoalbuminemia. The estimated c-index of the multivariate model for CSS and OS increased from 0.771 and 0.760 without pre-albumin to 0.775 and 0.765 when pre-albumin added.

Pre-albumin, a visceral liver-synthesized protein, is a sensitive marker for determining the state of malnutrition and easily quantified in hospital laboratories. Study has shown that pre-albumin is a remarkable prognostic factor for treatment outcomes of esophagus [11], ovarian [12], and lung cancers [13, 14]. However, the prognostic value of plasma pre-albumin levels for urological cancer has not yet been reported.

Thus, this study was designed to clarify the potential prognostic value of preoperative pre-albumin and albumin level in a large number of patients who have undergone RNU for UTUC.

Table 1: Clinical and pathological characteristics of 425 UTUC patients stratiﬁed according to the presence of low pre-albumin level and hypoalbuminemia

The median preoperative pre-albumin, albumin was 27.2 mg/dL(IQR, 22.5-31.3) and 41.8 g/L (IQR, 39.6-44.1). Lower pre-albumin was significantly associated with older age, higher tumor stage (muscle invasive vs nonmuscle invasive), higher rate of diabetes, regional lymph node metastasis and LVI (all p<0.05**, Table 1), but not gender, tumor location and tumor grade. On the other hand, hypoalbuminemia was only significantly associated with diabetes (p<0.05**, Table 1). 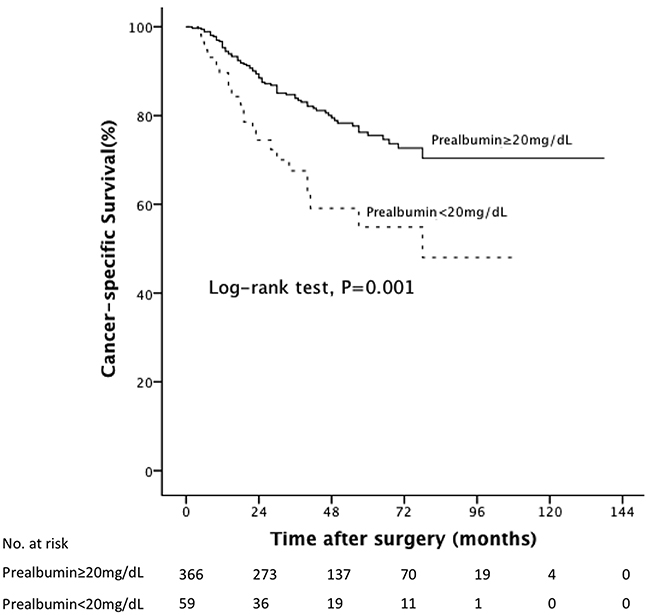 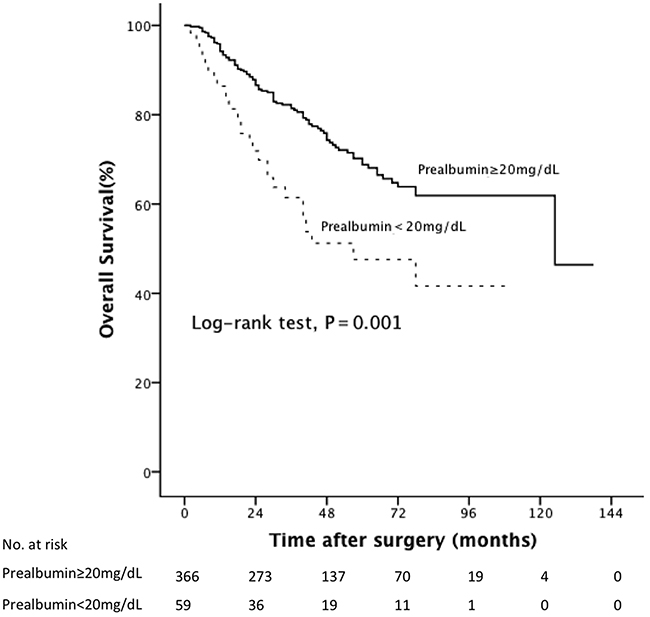 In the present study, we investigated pre-albumin level, albumin level and other standard prognostic factors in 425 patients undergoing RNU for localized UTUC. Multivariate analysis showed that in addition to other well-established prognostic factors, preoperative pre-albumin level was an independent predictor of CSS and OS, but not hypoalbuminemia. To the best of our knowledge, this study was the first to investigate the prognostic impact of pre-albumin level in patients of urological cancer. Our study also showed that age greater than 65, tumor multifocality, pT stage, pN stage, grade, LVI were associated with survival outcomes, which is consistent with previous study [1].

Cancer-related malnutrition has a high incidence [15–17], and in patients with cancer, an impaired nutritional state has a negative impact on treatment outcomes, length of stay in hospital, prognosis and survival [9, 18]. It is well accepted that nutrition is an important determinant of immune responses and that malnutrition impairs the immune system, suppresses immune functions [19–22]. Furthermore, protein energy malnutrition is common in patients undergoing surgery and is associated with signiﬁcant immunodeficiency, especially in the cell-mediated mechanisms, which is known to play a crucial role in the host defenses against infection or cancer [23].

Few studies have been conducted to determine the influence of perioperative nutritional status in the prognosis of UTUC patients [10, 24]. Kang et al. demonstrated that preoperative underweight (BMI<21.6 kg/m2) could significantly increase the rate of cancer-specific motility and overall mortality in UTUC patiets after RUN [24]. Ku et al. reported that preoperative hypoalbuminemia (albumin<3.5 g/dL) is an independent prognostic factor of CSS and OS in UTUC patients [10].

Despite recent progress in the identification of genetic and molecular alterations in UTUC has been made [27], the most widely used routine prognostic assessment of UTUC currently still relies on traditional clinicopathological prognostic variables [28, 29]. The predictive accuracy of prognostic model might be improved by these biomarkers, but the high costs of analysis, the time-consuming preparation, and the lack of evidence together prevent them into clinical practice. In our study, we showed that adding pre-albumin was able to raise the predictive accuracy in this cohort of UTUC patients regarding to CSS and OS. The base model with traditional variables plus pre-albumin had higher c-index than the base model alone in CSS (0.775 vs. 0.771) and OS (0.765 vs. 0.760) in our cohort of patients. Because of the poor patient prognosis in UTUC, detailed understanding of individual risk factor associated with patients’ prognosis will impart benefits for outcome prediction and individual patient treatment choices, such as neoadjuvant chemotherapy and lymph node dissection. Thus we believe that the present results may add additional prognostic information to accurate assessment of individual risk profiles even before the surgery.

Limitations of this study include that the retrospective nature of the data collection and study completed at a single high-volume center. Additionally, we did not compare the pre-albumin with other nutritional tools.

After institutional review board approval, the medical records from January 2003 to June 2013 archived at Renji Hospital were reviewed. During this period, 520 consecutive patients with nonmetastatic UTUC (Ta-4N0/+M0) underwent RNU at the department of urology at our institution. After excluding patients lost to follow-up within 3 months, patients without data on preoperative pre-albumin and albumin levels, patients with an active infection, patients with concomitant carcinoma invading bladder muscle and patients who underwent cisplatin-based neoadjuvant chemotherapy, there were 425 remaining patients who were included in the analyses.

Dissection of regional lymph nodes was performed in patients with lymph nodes enlarged in preoperative imaging. Pathological T stages were uniformly adjusted according to the 2009 TNM classiﬁcation system [30] and tumor grade was assessed according to Tumor grading was assessed according to the 1998 WHO consensus classification [31]. We defined multifocal tumors as follows: the synchronous presence of two or more pathologically confirmed tumors in any location within the upper urinary tract [8]. Plasma pre-albumin and albumin levels were routinely measured 1 to 3 day before surgical intervention as a routine preoperative examination. Pre-albumin level was accessed by turbidimetric immuno-assay (Hitachi, Tokyo, Japan). The cutoff points to stratify pre-albumin and albumin were using pre-albumin <20 mg/dl to identify low pre-albumin, albumin <35 g/L to identify hypoalbuminemia [32]. AC would be offered as an option to patients with muscle invasive disease, lymph node positive disease, or pT1 disease with LVI, high grade disease or tumor multifocality after surgery. The patient would make a decision after the beneﬁts and side effects of postoperative AC were explained by the treating urologist and oncologist together. The chemotherapy patients were administered 1000 mg/m2 gemcitabine on day 1, and 8 and 70 mg/m2 cisplatin on day 2 for the GC regimen. Cisplatin was replaced by carboplatin if the glomerular ﬁltration rate was less than 40 ml/minute/1.73 m2. Four to 6 cycles of chemotherapy were planned according to patient status.

The statistical software SPSS, v21.0 (IBM Corp., Armonk, NY, USA) was applied to all the analyses in this study. As to the clinicopathological outcomes according to the pre-albumin and albumin, for continuous variables, the Student t test was used for the variables reported as median (interquartile range (IQR)), for categorical variables, the chi-square and continuity corrected chi-square tests were used. The survival distributions were estimated by the Kaplan-Meier method and compared by a log-rank test. Univariable Cox proportional hazards models were used to address the relative impact of categorically coded low pre-albumin level, hypoalbuminemia, and other clinical and pathologic variables on CSS and OS. To prevent against overfitting by decreasing the number of variables, we selected only variables that were significant in univariable Cox models for the stepwise Cox regression analysis. Hazard ratio (HR) and 95% confidence interval (CI) were computed. The Harrell concordance index with variables only or combined pre-albumin data were used to evaluate the prognostic accuracy. All p values reported are two-sided, and p<0.05 was considered statistically signiﬁcant.

20. Lesourd B. Protein undernutrition as the major cause of decreased immune function in the elderly: clinical and functional implications. Nutr Rev. 1995; 53:S86-S94.