65 millions of people were affected by epilepsy in the world according to International League Against Epilepsy (ILAE) [1], and approximately 36% of epilepsy patients were drug-resistant [2]. Varieties of genes encoding channels, receptors, transporters, synaptic transmission, etc. have been associated with different types of epilepsy, among which, some were associated with refractory epilepsy [3, 4, 5, 6]. Many environmental factors, such as economic situation, diet, trauma, stroke, etc. were also associated with epilepsy or seizure [7, 8, 9, 10].

Epigenetic modifications, including DNA methylation, histone modification and aberrant microRNA expression, can affect genomic reprogramming, tissue-specific gene expression and global gene silencing without affecting DNA sequence itself [11, 12]. The most common form of DNA methylation occurs at the 5’carbon of cytosine in CpG dinucleotides which often locates in CpG islands within the promoters [13]. More recently, DNA methylation is raised as one of the main epigenetic mechanisms in epilepsy [14]. Previous genome-wide DNA methylation profiling in epileptic animal models presented altered DNA methylation in promoters of genes, and identified many genes that were associated with epilepsy [15].

Demographic and clinical characteristics of subjects

No significant difference in distribution of DNA methylation reads

No significant difference in distribution of DNA methylation peaks

The median of DMRs identified by pairwise comparison was 7604.50, covering a median of 8580791.00 bp. The distribution of DMGs in paired samples was mapped to human genome using Circos [20] (Figure 1). DMGs appeared on all of chromosomes extensively except for Y chromosome in refractory epilepsy patients. 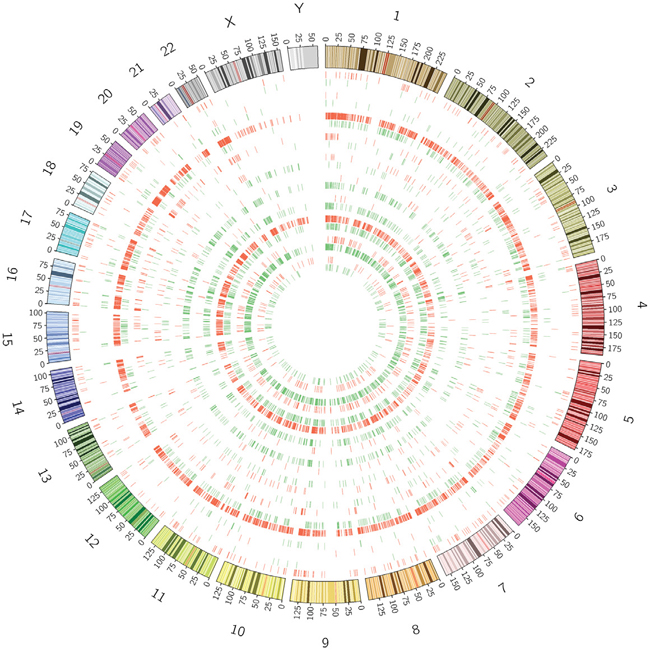 Figure 1: Distribution of differentially methylated genes (DMGs) across genome. Hyper-methylated (purple) and hypo-methylated (green) regions in epileptic samples vs. controls were targeted to each chromosome. Diverse distribution of DMGs was found in X chromosome, while DMGs appeared rarely in Y chromosome.

The significant enriched gene ontology (GO) terms of DMGs were presented in Table 2. Most of the DMGs were differentially methylated in gene element of CDS and introns. Significant enrichment of DMGs was observed in GO terms of binding of various molecules, such as ATP binding, ion binding, cation binding, and nucleoside binding. In addition, DMG enrichment was also identified in the GO terms involved in receptor activity, transporter activity, kinase activity, transducer activity and channel activity. Those DMGs participate mainly in the biological processes of adhesion and ion transport.

A total of 21353 genes were sequenced, among which 17665 genes were expressed by all samples. The sequencing coverage of 65.01% and 65.45% genes was over 90% in epileptic samples and controls, respectively, indicating a good sequencing quality. 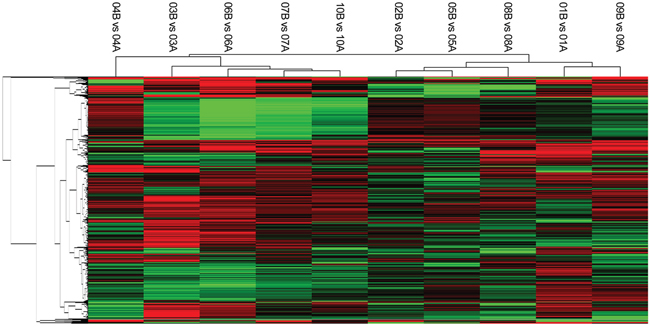 Table 4: Differentially expressed genes in ≥8 pairs of the samples

a: Epilepsy-related genes according to NCBI Gene (http://www.ncbi.nlm.nih.gov/gene). 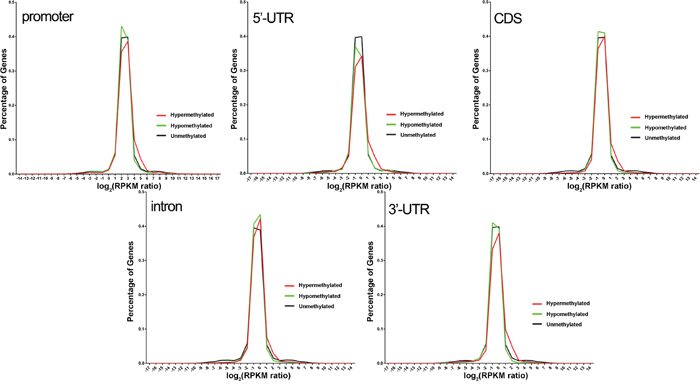 It is the first genome-wide report on DNA methylation and gene expression in refractory epilepsy patients. 62 differentially expressed genes such as MMP19, AZGP1, DES, and LGR6 were discovered to be correlated with refractory epilepsy, and diverse distribution of differentially methylated genes was found in X chromosome instead of in Y chromosome.

In pairwise comparison of gene expression analysis, we identified distinct gene expression signatures. 34 DEGs are correlated with epilepsy or seizure and 14 of these genes are associated with refractory epilepsy, such as AQP1 [21], CCR5 [22], EMP1 [23], CXCL8 [24], ITGA2 [25], and CCL2 [26]. For the first time, 62 DEGs differentially expressed in ≥8 pairs of samples were found related to epilepsy/seizure in our study. These newly-identified refractory epilepsy-related genes may possibly reveal new mechanisms of refractory epilepsy. In all the DEGs, only MMP19 and AZGP1 were differentially expressed in all the 10 pairs. Compared to the controls, 9 of the 10 epileptic samples showed increased expression of MMP19, while 1 epileptic sample showed decreased expression. MMP19 and other matrix metalloproteinases can cleave and remodel the extracellular matrix, including tenascin and laminin, and thus influence synapse formation and remodeling, N-methyl-D-aspartate receptor activity, learning and memory, and hippocampal long-term potentiation [27]. Inhibition of MMP19 and other matrix metalloproteinases may prevent development of epilepsy at the early stage of epileptogenesis [28]. Meanwhile, we found the expression of AZGP1 were decreased in 8 of the 10 epileptic samples, and increased in 2 of the 10 epileptic samples when compared to controls. AZGP1 encodes Zinc-a2-glycoprotein, which is an adipokine participates in lipid mobilization, lipolytic effect, and immune response [29, 30]. Moreover, both DES in 9 pairs and LGR6 in 8 pairs showed consistently increased expression in epileptic samples. To the best of our knowledge, it is the first time that MMP19, AZGP1, DES, and LGR6 were reported to be correlated with refractory epilepsy.

Significant enrichment of DMGs in GO terms of binding, transport, and enzymatic activity were found, which is consistent with previous studies [18]. Interestingly, most of the DMGs were differentially methylated in CDS and intron, while previous research showed differential methylation in all the gene elements in rat models of chronic epilepsy induced by pilocarpine [17]. These findings indicate DNA methylation in CDS and intron may play critical roles in refractory epilepsy besides promoter methylation which has been a very popular target in research on epilepsy [18, 31]. The GO enrichment analysis of gene expression revealed a trend similar to a previous report [17] that the DEGs are mainly correlated with biological functions such as protein binding, receptor binding, channel activity, transporter activity, and receptor activity, as well as being involved in biological processes such as immune system, biological regulation, response to stimulus, signaling, development, and behavior.

In KEGG analysis of gene expression, DEGs significantly enriched in calcium signaling pathway, neuroactive ligand-receptor interaction, and pathways participating in inflammation, immune response, autoimmune diseases. Calcium signaling pathway has been increasingly recognized as a vital factor in epileptogenesis and the excess synchronization, and hyperexcitability of neurons for seizures can be linked to various calcium signaling pathways [32]. The aberrantly neuroactive ligand-receptor interaction can enhance the susceptibility to epileptic seizures [33, 34]. It may explain partially that the drugs regulating the function of calcium signaling pathway and neuroactive ligand-receptor interaction are able to alleviate the seizure frequency [35]. The roles of immune response and inflammation in epilepsy have been recognized in previous studies [36]. Autoimmune epilepsy frequently present drug-resistance which can be controlled by immunosuppressive and immunomodulatory therapies [36, 37]. Consistent with Lukic and his colleagues’ study, we also identified that prion disease was significantly targeted by DEGs which indicate both refractory epilepsy and prion diseases may share some common pathway [38].

The research protocol was approved by the Ethics Committees of the Second Affiliated Hospital of Chongqing Medical University. All procedures performed in studies involving human participants were in accordance with the ethical standards of the institutional and/or national research committee and with the 1964 Helsinki declaration. Written informed consent was obtained from all individual participants included in the study or their proxies.

Resected brain tissues were retrospectively but consecutively collected from 10 patients with refractory epilepsy and 10 patients with post-traumatic intracranial hypertension who underwent surgical treatment since 2008 to 2014. Patients with refractory epilepsy were diagnosed following the definition of ILAE [39]. Briefly, all patients were resistant to maximum doses of at least three anti-epileptic drugs (AED), and evaluated by detailed history, neurological examination, neuropsychological test and neuroimaging data. For presurgical evaluation and epileptogenic zones identification, a combined assessment of ictal simiology, brain magnetic resonance imaging, video-electroencephalography, sphenoidal electrode monitoring and intracerebral electroencephalography and intraoperative electrocorticography were applied. After evaluation, standard en bloc resection was performed. No refractory epilepsy patient received adjustment of AEDs during the 2 months before surgery. Brain tissues as control from the 10 post-trauma intracranial hypertension patients were identified normal by neuropathologist. These patients had no history of epilepsy or exposure to AEDs. All the resected brain tissues were immediately frozen in liquid nitrogen and then stored at -80°C.

The 10 epileptic samples and 10 controls were paired, the difference in genome-wide DNA methylation and gene expression between the paired samples were analyzed using MeDIP-seq and mRNA-seq.

Filtered MeDIP-Seq data (Adapters, reads containing more than 10% bases undetermined, and low quality reads were removed. Low quality read means the quality values (Q) of more than 50% bases in this read were ≤20, Q=-10lg(rate of sequencing error)) was mapped to reference genome using SOAP software, version 2.21 (Website: http://soap.genomics.org.cn)[40], only unique alignments with no more than 2 mismatches were included for further analysis. The reference genome data and the data used for annotation of all aligned genes were from UCSC Genome Bioinformatics Download (Reference genome: http://hgdownload.cse.ucsc.edu/goldenPath/hg19/chromosomes/chr*.fa.gz. Reference genes: http://hgdownload.cse.ucsc.edu/goldenPath/hg19/bigZips/chromOut.tar.gz.).

Whole genome scanning of enrichment region of methylation/Peak was based on a defined analysis model, MACS 1.4.0 (Website: http://liulab.dfci.harvard.edu/MACS/) with default parameters [41]. The following items were calculated: 1) Distribution of peaks with different length; 2) Distribution of peaks with different CpG density; 3) Number and coverage of peaks in gene elements (promoter, 5’-UTR, CDS, intron, and 3’-UTR).

DMGs based on peak of all the paired samples were analyzed. Briefly, peaks of the paired two samples were merged as candidate DMRs. For each candidate DMR, the number of reads of each sample was calculated and tested to get true DMRs. The downtrend DMRs indicate that the number of reads of the control sample was larger than the epileptic sample and the uptrend DMRs indicate the opposite. DMGs were defined as the genes overlapping DMRs. Genes with an element merely overlap uptrend DMRs were considered hyper-methylated with such an element, genes with an element merely overlap downtrend DMRs were considered hypo-methylated with such an element.

To clarify the biological functions of DMGs, GO enrichment analysis was performed. Briefly, DMGs were mapped to GO terms in reference database (http://www.geneontology.org) and gene numbers for every term were calculated and tested to identify the significantly enriched GO terms.

The distribution of hyper-, hypo- and unmethylated gene expression levels in different gene elements were calculated to analyze the relationship between DNA methylation and gene expression as previously described [42].

To identify true DMRs, the numbers of reads were calculated and assessed using chi-square statistics and False discovery rate (FDR) statistics (p≤0.01, and the difference of read numbers should be more than twice). To identify significantly enriched GO terms and KEGG pathways, gene numbers for every term or pathway were calculated and then assessed using hypergeometric test, p-value of hypergeometric test was corrected using Bonferroni Correction [43]. GO terms with corrected p-value ≤0.01, and KEGG pathways with corrected p-value ≤0.05 were considered significantly enriched. In selection of DEGs, the gene expression level was calculated using RPKM method [44], and DEGs were selected as previously described [45]. The adjusted p-value was calculated using Benjamini, Yekutieli. 2001 FDR method [46] and DEGs was defined as genes with FDR≤0.001 and the RPKM difference between the paired samples should be more than twice. Hierarchical cluster was performed to analyze the expression pattern of DEGs using Cluster [47] and presented using Java Treeview [48]. The DEGs were clustered by Euclidean distance.

The authors have declared that no competing financial interests exists.

46. Benjamini Y, Yekutieli D. The control of the false discovery rate in multiple testing under dependency. The Annals of Statistics. 2001;29:1165-88.