A comparison of treatment modalities for nasal extranodal natural killer/T-cell lymphoma in early stages: The efficacy of CHOP regimen based concurrent chemoradiotherapy

This study was designed to evaluate the efficacy of several treatment modalities, including CHOP based concurrent chemoradiotherapy (CCRT), for the patients with stage IE or IIE nasal extranodal NK/T-cell lymphoma (nasal ENKL). The cases were retrieved between 2000 and 2010 (n=94), and were followed to the end of February 2016. The patients were grouped into A (chemotherapy alone; CT alone), B (sequential treatment) and C (CCRT). For those with efficacy evaluation for overall treatment (n=90), CR was attained in 60.0% (18/30), 69.8% (30/43) and 76.5% (13/17) patients in the group A, B and C, respectively. The 5-year OS rate was 35.2%, 41.9% and 70.6% in the group A, B and C, respectively. For patients with early stage diseases (IE and IIE), the ECOG performance status and the Ann Arbor stage were significant prognostic factors for both OS and PFS. Among the stage IE patients, besides the ECOG performance status, three prognostic factors which related to treatments (treatment modalities, efficacy of initial and overall treatment) were significant against OS or PFS. In conclusion, compared to chemotherapy alone and sequential treatment, nasal ENKL patients in early stages, especially stage IE, benefit the most from CHOP based concurrent chemoradiotherapy.

Because of the frequently expressed multidrug resistance (MDR) associated p-glycoprotein (P-gp), nasal ENKL patients usually do not efficiently respond to chemotherapy (CT), especially CHOP (cyclophosphamide, doxorubicin, vincristine and prednisone) or CHOP like regimens [4]. For the localized diseases in early stages, radiotherapy (RT) is considered as the front-line treatment [5], and usually produces a more rapid response and a higher complete remission rate (CR) [1]. However, RT alone is insufficient to improve overall survival (OS), and needed to be combined with CT in an appropriate sequence [6]. Among the combined treatment modalities, concurrent chemoradiotherapy (CCRT) using MDR- unrestricted agents [7] and radiation sensitizers [8, 9] can improve the CR rate to 73.3% and 77%, respectively [10]. However, the optimal treatment of early stages nasal ENKL remains to be determined.

To evaluate the relatively rare disease, it is not easy to perform a prospective trial. Therefore, we performed this retrospective study to compare the efficacy of CCRT, sequential treatments and CT alone for nasal ENKL in early stages.

All treatments were tolerable in most patients. The most common toxicity was neutropenia which developed from chemotherapy, and the mucositis from radiotherapy. In Table 2, only >2 radiation mucositis of group C is significantly higher than other groups. In the group A and B, four and three patients died of neutropenia associated infection, respectively. One patient in the group C died of treatment unassociated cerebral infarction. 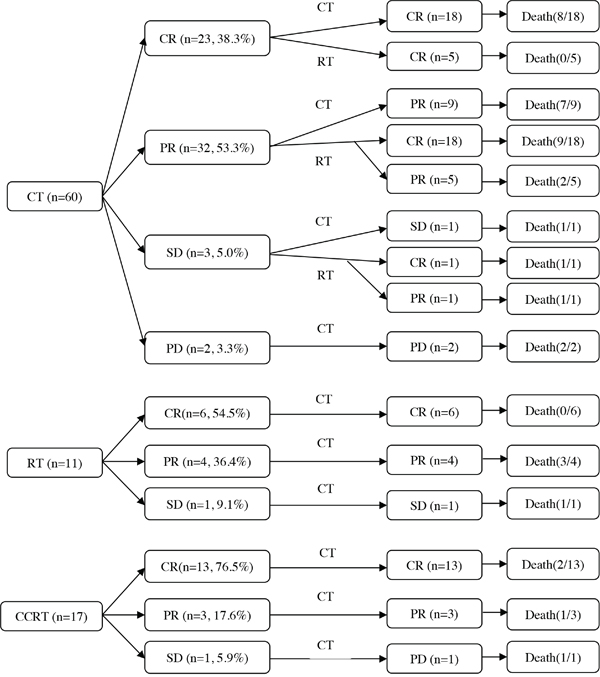 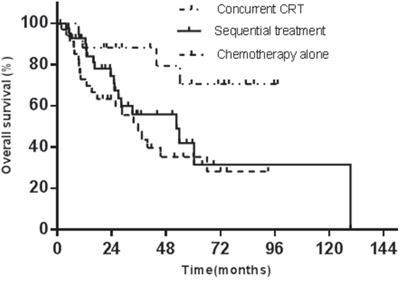 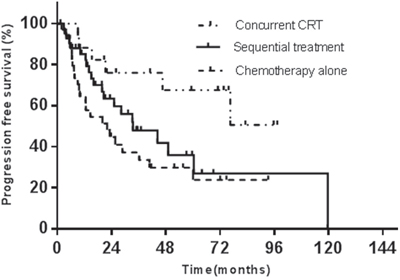 Only limited cases in stage IIE were enrolled (14, 7 and 1 patients in the group A, B and C), and none of the influential factors was significant against OS or PFS.

In this study, the most characteristics of early stages ENKL patients were balanced between the treatment groups, except that the new staging system and the Ann Arbor stage of group A (enrolled more stage IIE patients) were different from that of other groups. Our results indicate that, among all patients, the ECOG performance status and the Ann Arbor stage are both significant against OS or PFS. Among the stage IE patients, besides the ECOG performance status, three factors (treatment modalities, efficacy of initial and overall treatment) related to therapy are significant against OS or PFS. Because CHOP based concurrent chemoradiotherapy can produce a higher CR rate and a longer 5-year OS (or 5-year PFS) rate than chemotherapy alone or sequential treatment, the CCRT treatment is a better modality for early stages nasal ENKL patients, especially for those in stage IE.

In the past, RT alone was the first-line treatment of nasal ENKL (5-year OS rate about 40%) [11]. After it was classified as a lymphoma, chemotherapy became the first-line treatment modality [12]. Although some patients could be cured by CHOP (or CHOP-like) based chemotherapy [13], nasal ENKL frequently fails to respond to the regimens [14]. In the study from Wang et al [15], CHOP based chemotherapy, as an induction treatment, could produce a CR rate of 31.8%. In our patients treated with CT alone, additional chemotherapies could not efficiently convert them from PR to CR. This is consistent with the consensus that some nasal ENKL patients can benefit from the initial treatment of CHOP regimens, but not additional ones [4]. New regimens, for example L-asparaginase and gemcitabine regimen, were reported to be effective for nasal ENKL patients (2-year OS rate: 87.1%) [16–18]; however, the regimens needed to be evaluated further.

Although radiotherapy usually produced a rapid treatment response, only 11 patients in this nasal ENKL cohort were initially treated by radiotherapy, and achieved a CR rate of 54.5% (6/11). After initial treatment of chemotherapy, RT could convert 18/23 (78.3%) patients from PR to CR. Additionally, although poor responders to CT tended to accept RT in our hospital, the 5-year OS rates to CT+RT and RT+CT (38% and 58%) were comparable to other studies [12], and were higher than CT alone (35.2%). Above all, our paradigm interfered with treatment selection more or less, and the efficacy of RT should be further evaluated.

Currently, CCRT had been regarded as a treatment option for localized diseases [9]. Using MDR-unrestricted agents [8], radiation sensitizers [7] or shrinking-field radiation strategy [19] to induce antitumor effect, a higher 5-year OS rate could be achieved (73%, 78.6% and 80%, respectively). In our study, CHOP based CCRT could even produce a comparable 5-year OS and PFS rate (70.6% and 67.6%). Furthermore, except radiation mucositis, the toxicity profiles of CCRT for this cohort were also comparable to other groups, and are consistent with these CCRT studies. Therefore, it seems that, for patients with nasal ENKL in early stages, the initial treatment of CHOP based CCRT is efficacious, and is less influenced by the frequently expressed P-glycoprotein (P-gp).

Our results can be explained by the study on advanced breast cancer [20]. P-gp, an ATP dependent membrane transporter which pumps cytotoxic drugs out of cells, is coded by the MDR1 (ABCB1) gene. MDR1 transcription can be started at 2 promoters: a major downstream promoter (DSP) and a minor upstream promoter (USP). Although transcripts from USP are associated with translating polyribosomes, their low concentration makes the amount of P-gp insufficient to affect the response of cells to an initial chemotherapy [20].

In conclusion, compared to chemotherapy alone and sequential treatment, patients with nasal ENKL in early stages, especially stage IE, benefit the most from CHOP based concurrent chemoradiotherapy. This treatment strategy can attain a comparable CR rate to other CCRT studies.

Nasal ENKL cases in stage IE and IIE (Ann-Arbor stage [23]) were retrieved from the files of the Cancer Hospital of Shanxi Province between 2000 and 2011. All patients were diagnosed according to the morphological and immunohistological criteria recommended by the World Health Organization classification [24]. Additionally, the patients were scored and restaged according to the international prognostic index (IPI) and the new staging system [21], respectively. Our protocol was approved by the ethics committee at the Cancer Hospital of Shanxi Province, and signed informed consent forms were obtained from all participants, who were consented to be followed.

Because there was no standard treatment for nasal ENKL, the paradigm of our hospital was not accordant, and CHOP regimens were most frequently administrated ones. Generally, for classifying as a lymphoma, chemotherapy was the first-line treatment, and only the poor responders would accept radiotherapy. After the study in 2006 from Li et al [25], more nasal ENKL patients accepted radiotherapy than before (75% vs 51%, Fisher’s exact test p=0.022), but still not the first choice.

From medical records or by telephone, the patients were followed to the end of February 2016, and were grouped into A (CT alone), B (sequential treatment) and C (CCRT) according to treatment modalities. The radiation fields of limited stage IE diseases included the bilateral nasal cavity, bilateral ethmoid sinuses, and ipsilateral maxillary sinus. For extensive stage IE patients, the fields were extended to adjacent involved structures. For stage IIE diseases, bilateral cervical lymph node areas were also covered. Additionally, fields for Walder ring included the ring, adjacent involved organs or structures, and cervical lymph nodes.

PFS was measured from the day treatment began to the first event of either recurrence or death. OS was measured from the day of diagnosis to death from any cause. All data was inputted into the SPSS statistical software (version 10.01, SPSS Inc, Chicago, IL). Kaplan–Meier and Log-rank test were applied to calculate the survival rates and to compare survival curves, respectively. The Cox regression analysis was used to find out the significant prognostic factors for PFS or OS. p<0.05 was considered as the significant level.