Colorectal cancer (CRC) is a major cause of mortality and morbidity worldwide. While surgery remains the mainstay of treatment in early stage CRC, chemotherapy is usually given to prolong the overall survival and improve the quality of life for metastatic colorectal cancer (mCRC). But drug resistance is one of the major hurdles of mCRC treatment, and the underlying mechanisms are still largely unknown. In this study, we show that, compared with parental cells, RhoA is up-regulated in irinotecan (CPT-11)-resistant CRC cells. Furthermore, inhibition of RhoA in drug resistant cells, at least partially, rescues the resistance against irinotecan and increases the sensitivity to other chemotherapeutic drug by inhibiting expression of MDR1, MRP1and GSTP1, promotes apoptosis by suppressing the expression of BCL-XL and Bcl-2 and increasing Bax expression, and significantly decreases side population cells. Our results suggest that, in addition to survival, proliferation, migration, adhesion, cell cycle and gene transcription, RhoA is also involved in chemoresistance by regulating the expression of membrane transporter and apoptosis protein in colorectal cancer. They raise an interesting possibility that the expression of RhoA may indicate a poor prognosis due to the high probability to therapy resistance and, on the other hand, inhibition of RhoA activity and function may overcome chemoresistance and improve the effectiveness of clinical treatment of CRC.

Colorectal cancer is one of the most malignant cancers of digestive system, and its morbidity is increasing with years. The main treatment at present is surgery- plus chemotherapy-based comprehensive therapy. Irinotecan is one of common chemotherapeutic drugs for colorectal cancer, which inhibits DNA synthesis of cancer cells through inhibition of Topo I activity [1–3]. At present, FOLFIRI regimen, including CPT-11, 5-Fu and leucovorin, was considered as one of the standard first line or second line treatment of mCRC [4]. However, most patients become resistant to chemotherapy after a couple of cycles, leading to the failure of treatment. Therefore, chemoresistance is a bottleneck constraint of current therapies and the effectiveness has been seriously hindered. The mechanisms of chemoresistance in cancer cells are complicated and main mechanisms include (1) increased drug efflux mediated by membrane transport proteins such as ABC transport proteins family members p-glycoprotein (p-gp), multidrug resistance-associated protein (MRP), and breast cancer resistance protein (BCRP/ABCG2) [5, 6, 12]; (2) reduction in cell apoptosis mediated by bcl-2 family [7–9], NF-kB, and p53 [10]; and (3) other drug resistance mechanisms mediated by topoisomerase and glutathione S-transferase (GST). The reduction of topoisomerase activity leads to decreased affinity of topoisomerase with its target cells, which rendering target cells resistant to chemotherapy [11].

Rho GTPases family is an important intracellular signaling module and plays a key role in cell survival, proliferation, adhesion, cell cycle, gene transcription and other aspects of cell activities. While a subset of Rho GTPases are constitutively active, the majority of Rho family members act as molecular switches, cycling between the active, GTP-bound form and the inactive, GDP-bound form that are controlled by guanine nucleotide exchange factors (GEFs), GTPase-activating proteins (GAPs) and GDP-dissociation inhibitors (GDIs) [13]. As a primary Rho GTPase, RhoA is involved in multiple aspects of tumor development and progression, such as proliferation, migration, invasion, metastasis, and apoptosis [14, 15]. However, whether and how RhoA regulates drug resistance in colorectal cancer are poorly understood.

CPT-11 is one of the key chemotherapy agents for mCRC and resistance to CPT-11 is a major reason for the treatment failure. We established the CPT-11-resistant cells by exposure to a low dose of CPT-11 in culture media for 12 months, and preliminary results of comparative proteomic analysis of CPT-11-resistant CRC cells and parental cells show that irinotecan resistance is related to changes in several pathways such as cell proliferation/differentiation, cell apoptosis, and electron transport/redox regulation [16, 17]. In this study, we have explored the role of RhoA on CPT-11 resistance and underlying molecular mechanisms. Our study has provided a novel insight into the molecular mechanisms of drug resistance in colorectal cancer, and suggested that targeting RhoA signaling might improve the effectiveness of clinical treatment of colorectal cancer. 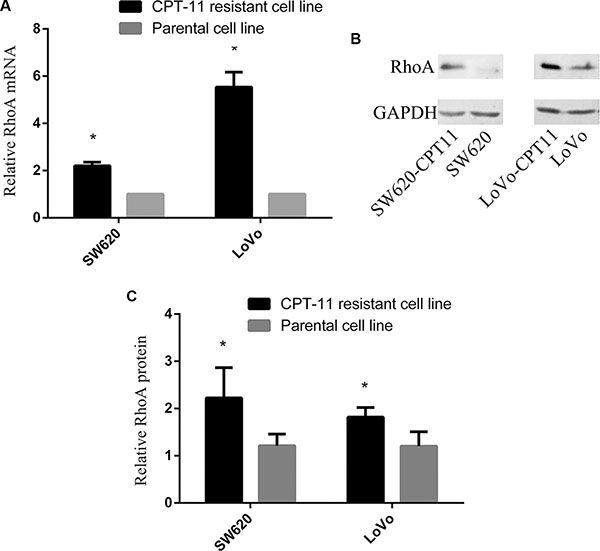 To examine if the increased RhoA expression is important for chemoresistance of CRC, we transfected SW620/CPT-11, LoVo/CPT-11 and parental cells with siRNA targeting RhoA coding sequences (si-RhoA) and control siRNA oligo (si-control), and then examined drug resistance index of the cells to oxaliplatin (L-OHP), cisplatin(DDP), Irinotecan (CPT-11), paclitaxel (PTX), 5-FU, epirubicin (EPI), and Etoposide (VP-16), by in vitro drug sensitivity assay. As shown in Table 1, the IC50 of all of the 7 chemotherapy drugs in CPT-11-resistant CRC cells was significantly increased compared to that in parental cells. However, the IC50 was significantly decreased upon transfection of si-RhoA (p < 0.05). These data suggest that inhibition of RhoA expression in CPT-11-resistant CRC cells, at least partially, overcomes chemoresistance of CRC.

SW620/CPT-11, LoVo/CPT-11 and parental cells were transfected with si-RhoA or si-control, and then drug resistance to L-OHP, DDP, CPT-11, PTX, 5-FU, EPI and VP-16 was tested by in vitro drug sensitivity assay. Data are representative of three independent experiments performed in triplicate. *indicates a significant difference from control oligo-transfected cells (p < 0.05).

Inhibition of RhoA suppresses the expression of P-gp, MRP1 and GSTP1 in CPT-11-resistant CRC cells 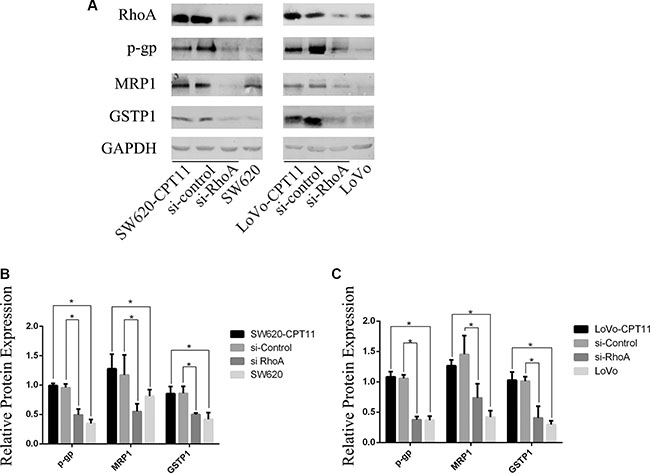 In addition to membrane transporting proteins, glutathione S-transferase(GST) is also involved in drug resistance [18]. The expression of GSTP1, an important member of GST family, was determined by Western blot in CPT-11-resistant CRC cells and parental cells. As shown in Figure 2, GSTP1 was up-regulated in CPT-11-resistant CRC cells and inhibition of RhoA by si-RhoA suppressed GSTP1 expression (Figure 2A–2C). These data suggest that both of membrane transport proteins and GST are regulated by RhoA, which, at least partially, contribute to CPT-11 resistance of CRC cells. 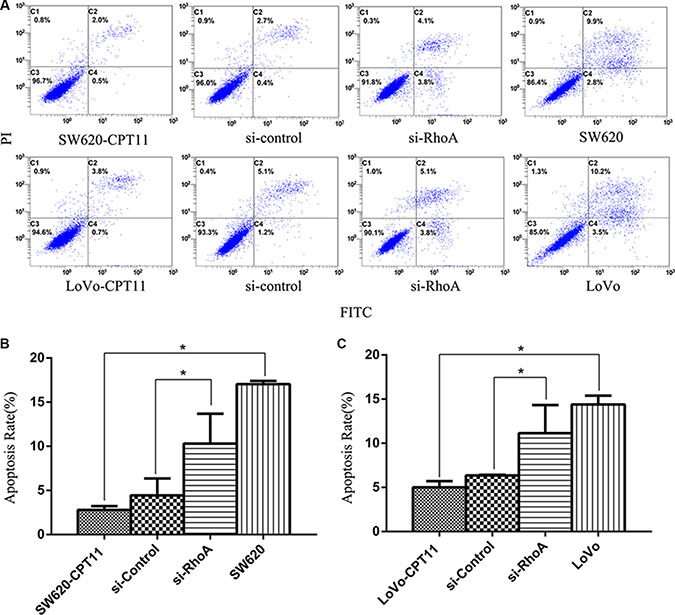 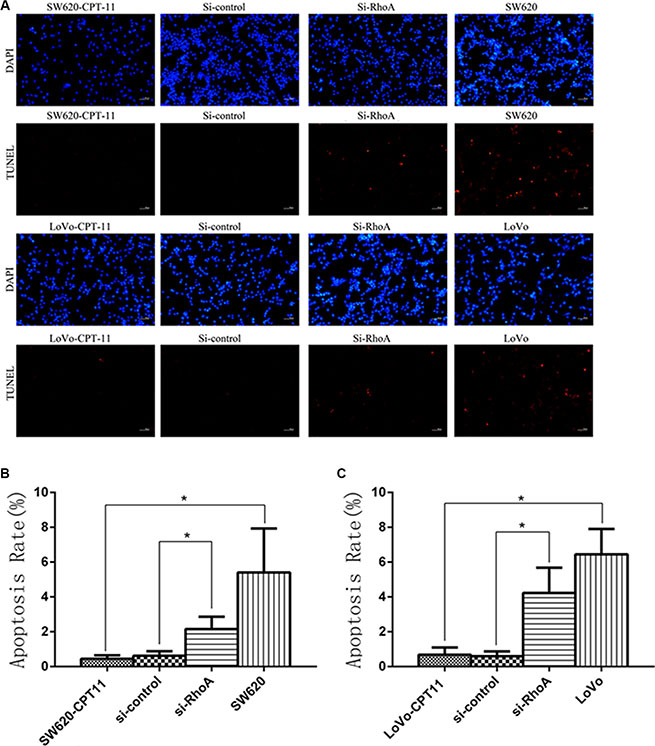 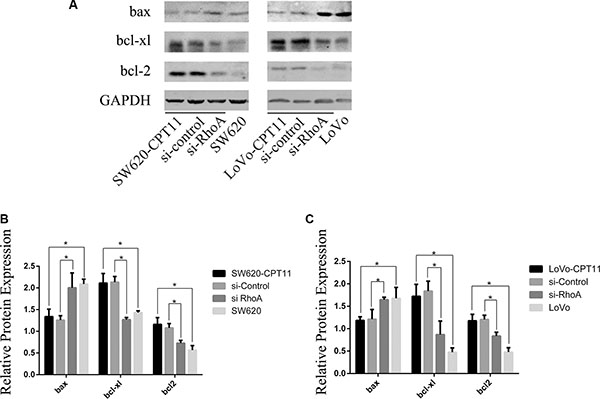 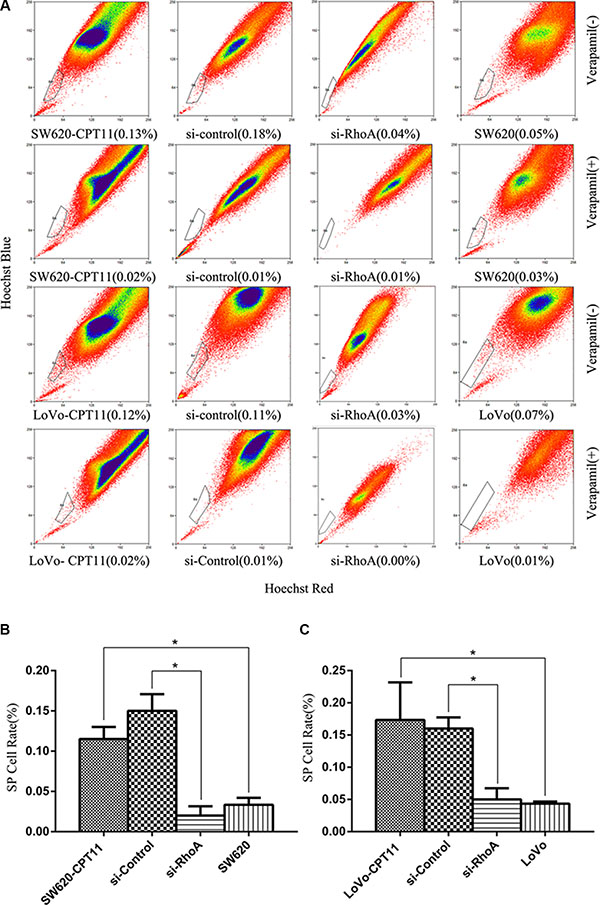 CRC is a major cause of mortality and morbidity worldwide [1]. For the advanced CRC, chemotherapy is recommended as a major treatment. But drug resistance highly limits therapeutic options and its molecular mechanism needs to be understood urgently. As a key member of the Rho GTPase family, RhoA is known to be involved in proliferation, migration, invasion, apoptosis, and angiogenesis, in several types of cancers [13–15]. However, the role of RhoA in chemoresistance is poorly defined. In this study, we investigated the effects of RhoA on CPT-11 resistance and underlying molecular mechanisms in detail. The results suggest that increased expression of RhoA promotes resistance to irinotecan by regulating membrane transporter and apoptosis signaling in CPT-11-resistanct CRC cells. Our findings are in line with that by Carloni V who has shown that RhoA is involved in cell fusion and causes the appearance of cells resistant to both 5-fluorouracil and oxaliplatin in a metastatic model of colon carcinoma [28]. Thus, the expression of RhoA may indicate a poor prognosis due to the high probability to therapy resistance.

In addition to increased ABC transporters, we have further found that suppression of apoptosis is another important mechanism of drug resistance of CRC and that RhoA critically inhibits apoptosis in CPT-11-resistant CRC. Studies have shown that Bcl-2 and Bax play important roles in mediating drug-induced apoptosis and drug resistance in various tumor cells, including hepatocellular carcinoma, bladder, lung and ovarian cancer [20–23]. Here we show that RhoA inhibits drug-induced apoptosis by impacting on Bcl-2, Bcl-xl and Bax.

Growing evidences support the notion that cancer is a disease driven by cancel stem cells that are responsible for tumor initiation, growth, metastasis, therapy resistance, relapse, and poor prognosis [24–27]. Several studies have demonstrated that the isolated side population (SP) cells from solid tumors exhibit cancer stem cell-like properties, and are responsible for drug resistance during chemotherapy and tumor recurrence [24–27]. In the current study, we have found that SP cells are increased in CPT-11-resistant CRC cells and suppression of RhoA leads to a sharp decrease of SP cells. It indicates that, in addition to membrane transport proteins and survival, cancer stem cells/SP cells are also regulated by RhoA and contribute to drug resistance of CRC.

Cells were seeded onto 96-well culture plates at a density 1.0 × 103/well with RPMI1640 100 ul per well. A total of 4 groups were set in this study: CPT-11 resistant group, siRNA control group, RhoA siRNA group, parental colorectal cancer cell group. Chemotherapeutic drugs CPT-11, L-OHP, PTX, VP16, EPI, DDP, 5-FU (Dalian Meilun Biology Technology co., LTD, China) were added at increasing concentration for 24 hours. The cells were continuously incubated for 48hours after removing the chemotherapeutic drugs. In vitro drug sensitivity was then determined using Cell Counting Kit-8 assay (Dojindo Molecular Technologies, Inc.Japan). In brief, the cells were added of 10 ul of CCK-8, incubated for three hours, measured for the absorbance at 450nm, and calculated for the inhibitory concentration of 50% cells (IC50). The assays were conducted in triplicate and repeated at least 3 times.

TUNEL assay is performed with a kit from Millipore according to the manufacturer’s instructions and observed by a fluorescence microscopy (Nikon, Japan). The assays were conducted in triplicate and repeated at least 3 times.

The cells were harvested and resuspended at 1 × 106/ml in prewarmed DMEM (Life technologies, USA) containing 2% fetal calf serum (Kang Yuan Biology, China) and 10 mM HEPES (Dalian Meilun Biology Technology co., LTD, China). The cell suspension was gently mixed in 15 ml polypropylene centrifuge tube (Corning, USA). And then Hoechst 33342 (Invirtrogen, USA) was added to a final concentration of 5 ug/ml and verapamil (Sigma-Aldrich, USA) of 80 ug/ml to control group. The cells were incubated for 90 minutes at 37°C and mixed every 30 minutes. After incubation, the cells were centrifuged at 500 g for 5 minutes, and resuspended in cold HBSS. Propidium iodide (Sigma-Aldrich,USA) was added into each tube at concentration of 1 ug/ml to discriminate dead cells. In order to avoid the effluxion of Hoechst 33342, further tests were performed at 4°C. SP cells were tested using flow cytometry and analyzed using Summit 5.2 software (Beckman Coulter, Inc., USA). The assays were conducted in triplicate and repeated at least 3 times.

IC50 was calculated using probit regression analysis. The results were reported as Mean ± SD and analyzed by student t-test or one way ANOVA by SPSS 18.0 analytic software. P values of < 0.05 were considered as statistical significant.