Breast cancer is the most common female malignancy worldwide [1–3]. Effective early detection by imaging studies remains critical to decrease mortality rates, particularly in women at high risk for developing breast cancer. In the late 1980s, Gail developed a series of evaluations and a prediction model for high-risk breast cancer [4], which has been widely used. However, given the diversities of heterogeneity and carcinogenesis, simply assessing life style and family history using questionnaires was far from enough to predict morbidity [5].

King et al. and Dontchos et al. examined the relationship between breast cancer and both the amount of fibroglandular tissue (FGT) and level of background parenchymal enhancement (BPE) using magnetic resonance imaging (MRI) [9, 10]. Their results suggested that greater BPE was associated with a higher probability of developing breast cancer. The odds ratio (OR) for moderate or marked BPE versus minimal or mild BPE was 10.1. Moreover, BPE findings remained significant after adjustment for FGT. This may be because BPE is partly an evaluation of the blood supply to breast tissue. They did mention, however, that there was observation bias in the subjective evaluation of BPE by physicians. Additionally, only early stage BPE was measured, and the middle and late stage BPEs were not evaluated in their studies. Kajihara et al. analyzed the relationship between enhancement time phase and BPE. They found that BPE was significantly stronger at the delayed phase than at the early phase in both qualitative and quantitative assessments throughout the menstrual cycle. [11] Thus, for better assessment of BPE in multiethnic populations and different centers, quantitative BPE should be used for accurate, objective and reproducible results.

Added to the time phase-dependent diversity, BPE is affected by hormones, age, menopausal status, menstrual cycle, the use of tamoxifen or aromatase inhibitors and hormone replacement therapy [11–16]. Thus, we developed software to assess BPE automatically. In this study, we aimed to evaluate the positive predictive capability of the quantitative assessment of BPER in breast magnetic resonance imaging (MRI) to determine the risk of developing breast cancer among women with breast cancer and benign lesions, as well as controls, with our newly developed software.

Characteristics of the study groups

There were 101 patients each in the breast cancer, benign lesions and control groups (Table 1). The mean age in each group was similar according to the paired-matching principle: 49.2 (24–78) years, 48.6 (24–78) years, and 48.8 (26–74) years. There were 47 premenopausal patients in each group, among which 8 (16%) were in the first week of menstrual cycle, 13 (28%) in the second week, 13 (28%) in the third week, and 13 (28%) in the fourth week. Among 101 breast cancer patients, 90 had infiltrating ductal carcinoma; three, infiltrating lobular carcinoma; six, ductal carcinoma in situ; one, adenoid cystic carcinoma; and one, sarcomatoid carcinoma. Among 101 patients with benign lesions, 68 had mastopathy; 22, fibroadenoma; eight, intraductal papilloma; and three mastadenitis. Tumor size data for cancer patients was shown in Supplementary Table S1.

Table 1: Clinicopathological characteristics of the patients by study group

BPER was associated with menopausal status in a time-dependent manner

The median premenopausal BPER was significantly higher than the postmenopausal one (P<0.01), regardless of the phase (early, medium and late enhanced phases) or group (control, benign and breast cancer groups). In both premenopausal and postmenopausal women, BPER increased with increasing enhanced time (Figure 1). 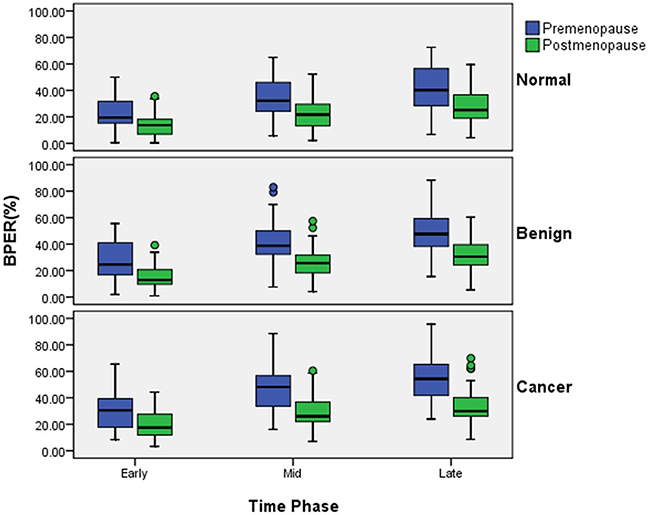 The cutoff point and OR for breast cancer

Table 2: Comparisons of AUC for the discrimination between breast cancer and benign tissue by BPER

Table 3: ORs for the comparison of cutoff points between the cancer and control groups

Table 4: ORs for the comparison of cutoff points between cancer and benign groups

Previous study reported the relationship between FGT/BPE and BI-RADS grade with visualization assessment [10]. Recently, Wengert GJ compared the quantitative and visualization measurements of FGT and suggested that quantitative measurements can provide reliable and standardized assessment of FGT with MRI [17]. Our study showed FGTs were only significantly different between postmenopausal breast cancer patients and normal population (Supplementary Table S2. Therefore, we designed a quantitative software to assess BPE.

In the present study, we compared BPER in breast cancer, benign lesions and control cohorts of patients who were not receiving hormone replacement therapy or hormonal deprivation therapy. Increased BPER was highly associated with breast cancer after adjusting for age, menopausal status and menstrual cycle. The most significant cutoff point was observed at the middle enhancement time phase for premenopausal women and at the early enhancement time phase for postmenopausal women.

Regions with increased BPE represent breast tissue with high biological activity, where carcinogenesis is thought to occur more frequently [18]. In our study, regardless of the menopausal status, breast cancer patients had higher BPER than those in the benign or control cohorts. These results are consistent with the observations of King [9] and Dontchos [10].

Previous pilot studies suggested that premenopausal women would have higher BPE and that BPE increased as the time of enhanced MRI increased [12–14]. This time-dependent trend of BPER was not only observed in breast cancer, but also in the benign and control cohorts. The same findings were observed in our study.

A major advantage of our study is that BPER is a minimally invasive assessment that allows the early detection of breast cancer. However, there were several limitations to this study. First, enhanced MRI was only divided into three time phases with low-time resolution. Further studies with tensor scanning would improve MRI time resolution with more discriminative cutoff points. Second, the software for BPE applied in this study is still not commercially available and can only be used in specific work stations. Wide application of this model is warranted. Third; BRCA1/2 mutations were associated with breast cancer, however in this retrospective study BRCA 1/2 status was not available. Our study showed that BPER is a predictor of high risk of developing breast cancer. Additionally, the individualized cutoff point of BPER for differentiation breast cancer by menopausal status makes the model more accurate.

In this study, we retrospectively collected consecutive 14,033 women underwent breast MRI examination in our hospital from 2009 to 2012. Among them, only 391 individuals were bilateral normal breast (BI-RADS 1) in MR test and without any lesion on MRI, or mammography, or ultrasound examination 2 times in subsequent two years. Only patients with 4 weeks menstrual cycle without hormonal therapy were enrolled. There were 101 control subjects meeting the criteria. Based on this selected control group, we selected age- and menstrual status-matched with 4 weeks of menstrual cycle patients with breast cancer and benign lesions with a ratio of 1:1. The age ranges were defined as less or equal to 5 years. Patients were categorized based on premenopausal and postmenopausal status. Premenopausal status was subclassified into four groups (i.e., 1–7 days after menstruation for the 1st week, 8 to 14 days for the 2nd week, 15 to 21 days for the 3rd week, and 22 days to the next menstruation time for the 4th week) based on the menstrual cycle. Patients with breast cancer had untreated, unilateral breast cancer, whereas the patients with benign lesions had unilateral breast benign lesions confirmed by biopsy or operation.

All breast MRI examinations were performed with an Aurora 1.5-T dedicated breast MRI scanner (Aurora Imaging Technology, Inc., Canada) and Breast unique transmit/receive coil (two channels). Patients were in prone position, and both breasts were examined with natural ptosis. The scanning range included bilateral breast and axillary areas. The contrast used to acquire the dynamic contrast enhancement MRI (DCE-MRI) was Gd-DTPA at a dose of 0.2 mmol/kg. The contrast was injected intravenously with a high pressure syringe at a flow rate of 2.0 mL/s. Subsequently, 15 mL of 0.9% NaCl solution was injected at the same flow rate to flush the remaining Gd-DTPA. Each case underwent DCE-MRI, which typically included several MRI series, including one-position reference image, one T2-weighted fat-suppressed image, one T1-weighted nonfat-suppressed image, one pre-contrast T1-weighted fat-suppressed image and three post-contrast T1-weighted fat-suppressed images. The post-contrast images were acquired at three time phases (early-2 minutes, middle-4 minutes, and late phases-6 minutes) after contrast injection. The scanning time for the pre-contrast or each post-contrast MRI series was about 2 minutes. The scanning parameters are shown in Table 5. 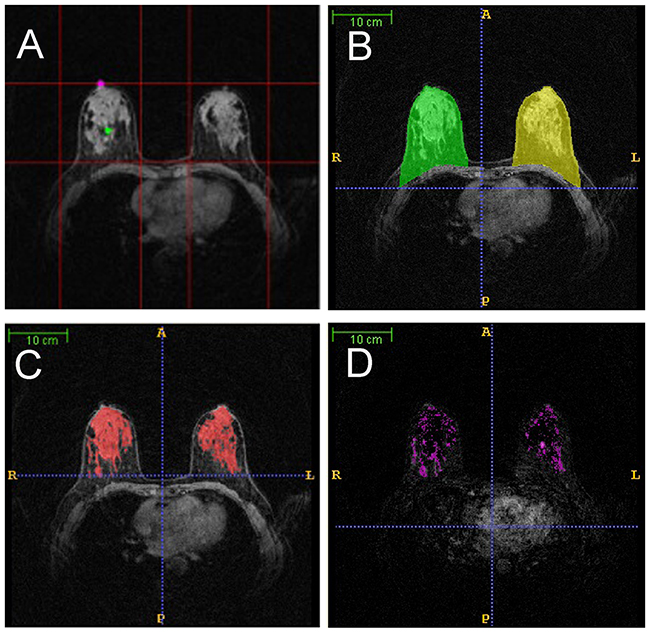 According to the relative consistency of background parenchyma in bilateral breasts, to avoid the effects of the lesion itself, the mean between bilateral breasts was chosen as the measurement target in the control group, as well as contralateral breast in benign and cancer groups. The BPER in premenopausal and postmenopausal women was compared using the Mann–Whitney U test. Receiver operating characteristic (ROC) curves of BPER in premenopausal and postmenopausal women were drawn respectively between cancer and control groups and cancer and benign groups using a nonparametric method. The AUCs in the three phases after enhancement were calculated to find the optimal phase of breast cancer-related BPER. With the application of the ROC curve of the optimal phase and the cutoff point were chosen with the maximum AUC. The ORs between the cancer and control groups and the cancer and benign groups were estimated.

This work was supported by the National Natural Science Foundation of China (Grant No. 81301282 and 81471662), the Science and Technology Committee of Shanghai City (Grant No. 13DZ2250300) and Shanghai clinical supportive department of hospital construction Foundation (Grant No. SHDC22015030). CAD technologies developed by Qiang Li and his colleagues have been licensed to companies including Hologic, Inc., Riverain Medical Group, Median Technology, Mitsubishi Space Software Co., General Electric Corporation, and Toshiba Corporation.