Elevated inflammatory markers are associated with poor outcomes in various types of cancers; however, their clinical significance in multiple myeloma (MM) have seldom been explored. This study investigated the prognostic relevance of neutrophil-to-lymphocyte ratio (NLR), platelet-to-lymphocyte ratio (PLR), and monocyte-to-lymphocyte ratio (MLR) in MM. Totally 559 MM patients were included in this study. NLR, PLR and MLR were calculated from whole blood counts prior to therapy. Kaplan-Meier curves and multivariate Cox proportional models were used for the evaluation of the survival. It has shown that newly diagnosed MM patients were characterized by high NLR and MLR. Elevated NLR and MLR and decreased PLR were associated with unfavorable clinicobiological features. Applying cut-offs of 4 (NLR), 100 (PLR) and 0.3 (MLR), elevated NLR, MLR and decreased PLR showed a negative impact on outcome. Importantly, elevated NLR and decreased PLR were independent prognostic factors for progression-free survival. Thus, elevated NLR and MLR, and decreased PLR predict poor clinical outcome in MM patients and may serve as the cost-effective and readily available prognostic biomarkers.

Multiple myeloma (MM) is a malignant tumor of plasma cells characterized by a strong dependence on bone marrow milieu [1]. The interaction between MM cells and bone marrow microenvironment plays a crucial role in MM pathogenesis. It is now becoming clear that MM microenvironment is largely orchestrated by inflammatory cells including macrophages, dendritic cells, mast cells and myeloid-derived suppressor cells [2–4]. These cells are the major sources of cytokines in MM-infiltrated bone marrow [5], and meanwhile they can mediate immune suppression in MM. Moreover, MM is characterized by high levels of CRP, IL-6, IGF-1, TGF-β and IL-17 as the markers of systemic inflammatory response [6]. These data suggest that a tight link exists between inflammation and pathogenesis in MM.

Inflammation is one of the hallmarks of cancer and tumor-associated inflammatory response has a critical role in enhancing tumorigenesis by inducing tumor cell growth, angiogenesis and genome instability [7]. The host response to malignant tumors consists of changes in the tumor microenvironment as well as systemic alterations. Systemic inflammation is associated with the alteration in peripheral blood leukocytes that can be captured by neutrophil-lymphocyte ratio (NLR). Recently, platelet-to-lymphocyte ratio (PLR) has been introduced as another measurable parameter to determine inflammation [8, 9]. Moreover, monocyte-to-lymphocyte ratio (MLR) has been proposed as an indicator of systemic inflammatory response [10, 11]. Importantly, these emerging biomarkers have revealed the impact on clinical outcome of several solid tumors, such as cervical carcinoma, kidney cancer, gastrointestinal cancer and lung cancer [8, 12–15]. However, the clinical significance of myeloma-associated inflammation is largely unknown.

It is widely recognized that the biological behavior of MM cells is determined by both their genetic background and their bone marrow microenvironment; however, the current risk stratification is mainly based on tumor biology, tumor burden, and patient characteristics. No factors related to microenvironment have been enrolled [16]. One of the reasons is the lack of easy-to-access prognostic biomarkers. Thus, the purpose of the present study was to evaluate the prognostic value of cellular components of the systemic inflammatory response, including of NLR, PLR and MLR on progression-free survival (PFS) and overall survival (OS) in MM patients.

Figure 1: A comparison of NLR, PLR and MLR between healthy individuals and MM patients. 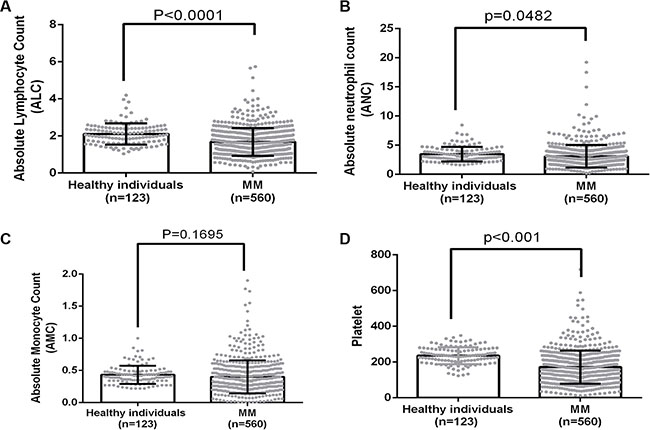 Figure 2: A comparison of ANC, ALC, AMC and platelet count between healthy individuals and MM patients. 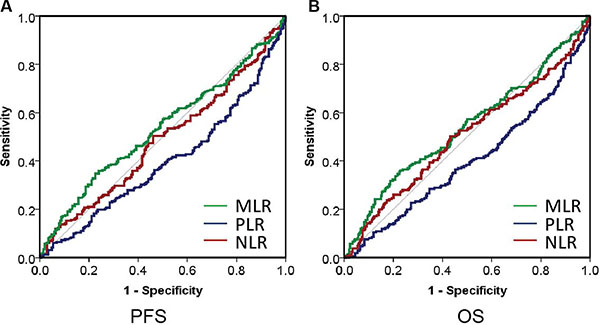 Figure 3: The ROC curve analysis for the optimal cutoff point of NLR, PLR and MLR. 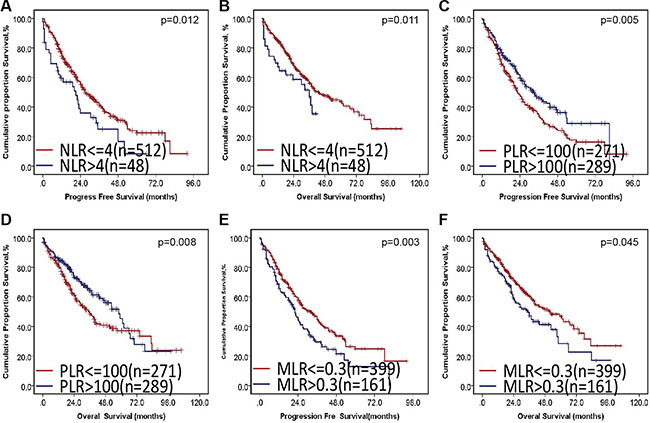 Figure 4: The impact of NLR, PLR and MLR on PFS and OS in MM.

Although it is recognized that cancer formation has a genetic basis, there is increasing evidence that the host inflammatory response plays an important role in the development and progression of cancer. Chronic inflammation is one of the hallmarks of cancer and contributes to cancer development [17]. NLR, PLR and MLR are simple indicators of systemic inflammation, which can provide prognostic information in a wide range of cancer types. Herein, we find MM tumor cells selectively induced lymphopenia and thrombocytopenia, but have less impact on myeloid cells, especially monocytes. Newly diagnosed MM patients are characterized by high NLR and MLR. Elevated NLR and MLR and decreased PLR are associated with unfavorable clinico-pathological features and have a negative impact on survival of MM. Importantly, elevated NLR and decreased PLR have independent prognostic value on PFS. Our results have demonstrated that systemic inflammation markers can be valuable biomarkers for the prognosis and risk stratification of MM.

Anemia is a common clinical feature of MM. Thrombocytopenia and lymphopenia are also common when the tumor load is high. However, myeloid cells are usually normal in whole blood cell count. Indeed, our results have first shown a significantly lower ALC, ANC and platelet count when compared with healthy individuals, whereas AMC is similar between MM and healthy control. Our data show that MM cells cannot simply displace hematopoietic cells upon BM infiltration, but rather selectively modulate the BM microenvironment.

Chronic inflammation contributes to cancer development via multiple mechanisms. One potential mechanism is that chronic inflammation can generate an immunosuppressive microenvironment for tumor formation and progression [18]. Monocyte-derived cells are very important for both MM survival and immune escape. Especially, various monocyte-derived cells, including macrophages, myeloid-derived suppressor cells (MDSCs) and dendritic cells (DCs), play an important role in mediating immune suppression in MM [3, 4, 19]. These cells are recruited by MM cells to create a localized immunosuppressive microenvironment for MM survival, which could be that reasons that MM patients have a normal monocyte level regardless of BM infiltration. Monocytes may represent a novel mechanism by which the pro-inflammatory response is linked to immune tolerance in the tumor milieu. Indeed, activated monocytes in hepatocellular carcinoma microenvironment foster immune privilege and disease progression through PD-L1 [20], which may be the reason that MM cells selectively preserve a pool of myeloid precursor cells.

We have further confirmed that MM patients have significantly elevated NLR and MLR, whereas, PLR is similar between healthy individuals and MM patients. Lymphocytes have an important role in immune surveillance. ALC has been identified as a surrogate marker of the host anti-tumor immune status, and has been demonstrated as an independent prognostic parameter for predicting survival and clinical outcome in a number of hematological malignancies. Indeed, our study has demonstrated a significantly decreased ALC in MM and the decline of ALC leads to the elevated NLR and MLR.

The elevated NLR has been reported to be a poor prognostic indicator in several malignancies [21], but only few reports have examined its impact on MM [22, 23]. Consistent with precious study, our results have demonstrated that elevated NLR was associated with unfavorable clinico- pathological features. Especially, elevated NLR was associated with high beta-2 microglobulin, but low frequency of high-risk cytogenetic abnormalities. These data suggested that NLR was an inflammatory marker and its impact on survival was independent on cytogenetic abnormalities. However, different cut-off values were used due to different patients and treatments in several series recently published. Moreover, the prognostic value of NLR may be more important in patients receiving immunomodulatory drugs (IMiDs) or immunotherapy. Larger cohorts and prospective studies are needed to establish the cut-off and prognostic value of NLR.

Emerging evidence strongly supports that platelets are also part of the inflammatory response and thrombocytosis is common in patients with solid tumors [24]. In addition, PLR is introduced as a potential marker to determine inflammation, and a higher platelet to lymphocyte ratio is associated with poor prognosis in a few types of cancer [25]. MM patients show evidence of platelet activation as measured by elevated plasma soluble P-selectin [26] and are highly susceptible to therapy-induced thrombosis [27]. Importantly, activated platelets secrete many cytokines that are required for growth of myeloma cells including IL-6, VEGF, SDF-1α, and IGF-1, suggesting that platelets may affect the microenvironments of MM. However, with the expansion of malignant cells in bone marrow, thrombocytopenia is frequently observed in MM. Thus, PLR is not only an inflammatory marker, but also a marker of tumor burden and aggressiveness in MM. Indeed, we have found that PLR is associated with high tumor burden parameters in this study, and importantly, more patients belong to the high-risk cytogenetic group.

MM is a plasma cell malignancy critically dependent on signals generating from the inflammatory microenvironment for survival and proliferation. Inflammatory factors may play a critical role in risk stratification of MM. Our study indicated that elevated NLR, MLR and decreased PLR were associated with poor prognosis in MM. Importantly, elevated NLR and decreased PLR were independent prognostic factors. However, multivariate analysis showed these inflammation-related factors were only loosely and independently prognostic for OS. These data suggested that NLR and PLR were low-cost and easy-to-access tests that predicted PFS in MM. But cytogenetic aberration and ISS stages are still the most important prognostic factors of OS in MM.

In summary, the results of the present study showed that NLR, PLR and MLR were prognostic in patients with MM. They could be used as the easily accessible and reliable markers to predict MM prognosis.

The myeloma patients were enrolled from a prospective, nonrandomized clinical trial (BDH 2008/02) as previously described [28]. The trial was conducted in accordance with the Declaration of Helsinki (Version 1996) and approved by the local ethics committees of institutions. The diagnostic criteria were consistent with the criteria for symptomatic MM as defined and published by the International Myeloma Working Group [29]. The responses were evaluated using the International Myeloma Working Group criteria [30]. A cohort of 560 consecutive patients was enrolled between January 2008 and October 2013, with a median follow-up time of 64 months from diagnosis.

Calculation of NLR, PLR and MLR

All MM cell samples were purified using Miltenyi technology (anti-CD138-coated magnetic beads; Paris, France) before FISH as reported previously [31]. Plasma cells were then analyzed using DNA probes specific for the following chromosomal aberrations: 13q14 deletion, 17p13 deletion, t(11;14), t(4;14), and t(14;16). Gains of 1q21 were assessed using a bacterial artificial chromosome probe at 1q21 (RP11-307C12) [32]. A total of 200 interphase nuclei were analyzed. According to Intergroupe Francophone du Myélome (IFM), high-risk MM was defined as the presence of any one or more of the following genetic abnormalities: deletion of 17p13, t(4;14), and t(14;16) [31].

The primary end point was correlated with the survival from the time of diagnosis. PFS was calculated from the start point of the treatment to disease progression or the date of death (regardless of cause of death), whichever came first. OS was measured from the initiation of treatment to the date of death or last follow-up, according to the international uniform response criteria [33]. Unpaired T tests were used to assess the associations between categorical variables, with a confidence coefficient of 95%. The survival curves were plotted using the Kaplan-Meier method, with difference assessed by the log-rank test. The P-value of less than or equal to 0.05 was considered statistically significant.

We thank the doctors and the patients who participated in this study.

The present study was financially supported by the National Natural Science Foundation of China (81670202, 81400175 and 81370632), and the Special Key Anticancer Research and Development Program of Tianjin Municipality (12ZCDZSY17600).