Malignant tumors of the vulva, most of them squamous cell carcinomas, account for only 5% of cancers of the female genital tract. Though little is known about the genetic features of these tumors, the Fragile Histidine Triad (FHIT) and High Mobility Group AT-hook 2 (HMGA2) genes were found deregulated. We wanted to gain more knowledge about the expression of HMGA2-related miRNAs such as miR-30c and let-7a, and whether a correlation exists between the expression of FHIT and HMGA2, in this tumor type. An inverse correlation was found in-as-much as HMGA2 was highly expressed (mean fold change 8.8) whereas miR30c and let-7a were both downregulated (mean fold change -3.9 and -2.3, respectively). The consistent overexpression of HMGA2 found in all tumors adds to the likelihood that this gene is of importance in SCC pathogenesis. Moreover, we came to the conclusion that miRNAs may be the cause of the deregulation of HMGA2. Our results also show that SCC of the vulva presents a characteristic molecular pattern with FHIT being downregulated whereas HMGA2 is upregulated.

Squamous cell carcinomas (SCC) account for 70% of all malignant tumors arising in the vulva. [1]. Little is known about the genetic features of this cancer as only 44 cases of vulvar SCC have been cytogenetically and/or molecularly analyzed [2–6]. Our group has previously reported a chromosome- and array-based comparative genomic hybridization (CGH) analysis of vulvar SCC which showed, among other imbalances, frequent loss of chromosomal band 3p14 [2]. The Fragile Histidine Triad (FHIT) tumor suppressor gene, which maps to this band, was found downregulated [2]. Recently, we showed expression of the High mobility group AT-hook 2 gene (HMGA2) in 86% (20 out of 23) of vulvar SCC analyzed [7].

An inverse correlation between the expression of FHIT, miR-30c, and HMGA2 was found by Suh et al. [6] in lung cancer. FHIT enhances the expression of miR-30c as well as HMGA2 repression thereby inhibiting epithelial-mesenchymal transition and the metastatic process in small cell carcinoma of the lung. The interaction between this miRNA and the HMGA2 3’untranslated region (3’UTR) seems to be crucial in gene expression control [8]. Since our previous findings in SCC of the vulva [2] hint at a similar expression correlation as that detected in lung cancer, we decided to quantify the expression levels of HMGA2 and miR-30c in the 10 tumors of the vulva that were found to have deregulated HMGA2 and FHIT, and to assess the expression levels of the miRNA let-7a which is known to target and repress HMGA2 [9–11], as well as the expression of the let-7a regulators LIN28A and LIN28B [12].

All molecular investigations gave informative results (Table 1) which were normalized using the two normal vulva tissue samples. HMGA2 was expressed at high levels in all 10 tumors analyzed with an 8.8 fold change average (range: 7-14) (Figure 1A). miR-30c was strongly downregulated in all 10 tumors (Figure 1B) with an average fold change of -3.9 (range: -2.3 to -5.5). The analysis of let-7a expression found downregulation in all cases with a mean -2.3 fold change (range: -0.5 to -3.5) (Figure 1). LIN28A was found deregulated in four out of ten tumors. In these samples, the detected fold changes were -1.5 for cases 1 and 2, - 3.5 for case 3, and -1 for case 10 with a mean fold change of -1.8. Three tumors (cases 4, 7, and 9) showed upregulation of LIN28A with a fold change of 2.5 for case 4, 6 for case 7, and 1.5 for case 9 giving a mean fold change of 3.3. In the remaining three tumors (cases 5, 6, and 8), LIN28A expression was similar to that of the normal controls (Figure 1A). No expression of LIN28B was detected in the 10 SCC of the vulva or in the two normal controls. However, the gene was found expressed in the Total Human Universal Reference used as an internal control for each reaction.

Table 1: Overview of the samples and results

Arrows are used to show deregulation of the genes (arrow head up: up regulation; arrow head down: down regulation)

b Genomic Imbalances assessed with an array based Comparative Genomic Hybridization (aCGH) showing a loss of the FHIT locus. * aCGH detected a homozigous deletion for the FHIT locus.

d No LIN28B expression was found in our samples. 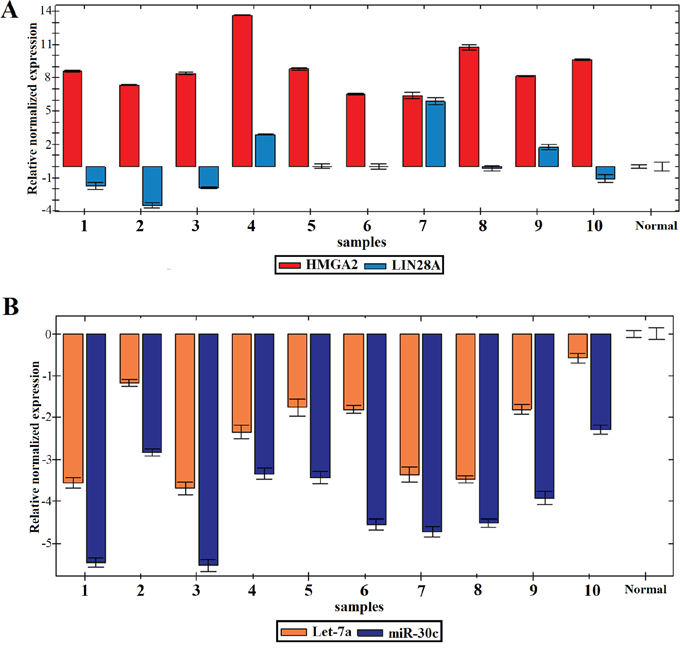 Searching for possible causes behind the deregulation of let-7a and miR-30c in vulvar SCC, we checked the genomic imbalance charts of these tumors to find if the miRNA clusters for let-7a and miR-30c were deleted. These data were retrived from our previous publication on the very same samples in which an array Comparative Genomic Hybridization study was described [2], looking specifically for the three genes expressing let-7a, MIRLET7A1 on 9q22.3, MIRLET7A2 on 11q24.1, and MIRLET7A3 on 22q13.3, and the two genes for miR-30c, MIR30C1 and MIR30C2, mapping on 1p34.2 and 6q13, respectively. No genomic loss was found for the chromosomal bands in which these miRNAs clusters are located, the only exception being case 10, where a deletion was found in the chromosome arms containing all three MIRLET7A genes (6q, 9q, and 22q).

Few SCC of the vulva have been characterized both at the cytogenetic and molecular level. HMGA2 is one of the few genes found to be activated in this tumor type [6]; however, no previous study has quantified its expression. We found that HMGA2 was expressed at high levels in all 10 vulvar SCC analyzed with an average fold change of 8.8. HMGA2 belongs to the High-mobility group AT-hook family of non-histone proteins involved in a wide variety of cellular processes from DNA damage repair to gene regulation [13]. The gene is expressed during embryonic development [14] but is usually unexpressed in adult normal tissues [15]. High expression levels of HMGA2 have been found in various types of tumors including benign connective tissue neoplasms and malignant tumors [16]. HMGA2 promotes diverse tumorigenic processes from cellular proliferation to epithelial-mesenchymal transition (EMT) and metastasis formation [17]. The mechanisms that lead to unchecked expression of HMGA2 in cancer are still not fully understood, but miRNA-dependent regulation seems to play a role. The HMGA2 3’untranslated region (3’UTR) contains regulatory sequences that are targeted by different families of miRNAs [8], and miRNA-dependent repression seems to be the main mechanism to ensure negative HMGA2 expression [10, 11, 18]. Another piece of evidence testifying to the importance of the interaction between HMGA2 and miRNAs is the high frequency of disrupted forms of this gene, due to rearrangement of chromosomal band 12q15, found in different tumors [19]. These alterations bring about loss of the 3’UTR leading to a truncated transcript that evades miRNA-dependent gene silencing [19]. Interestingly, no truncated form of the gene was found in the investigated samples [6], further hinting at the importance of alternative mechanisms of gene deregulation in vulvar SCC. To test this further, we decided to assess the expression of two miRNAs, miR-30c and let-7a, that are known to target and regulate HMGA2 [9, 18].

Our study showed that SCC of the vulva presents a characteristic molecular signature in that FHIT is downregulated while HMGA2 is upregulated. The deregulation of these genes may be correlated with the invasive capacity of these tumors as shown in lung cancer [18]. FHIT is a suppressor gene with a role in apoptosis and epithelial-mesenchymal transition (EMT) [24, 25]. HMGA2 induces EMT and invasiveness in epithelial tumors and high expression levels of the gene have been seen in primary as well as metastatic carcinomas [26]. HMGA2 enhances the TGFβ-SMADs signaling pathway [27] and so upregulates the major transcription factors involved in EMT, i.e, SNAIL1, SNAIL2, and TWIST. The consistent overexpression of HMGA2 found in 10 out of 10 tumors adds to the likelihood that this gene is of general importance in SCC pathogenesis. MiRNAs may be the cause of the HMGA2 deregulation. This irrespective, the deregulation of these genes together with downregulation of FHIT constitutes a molecular signature of vulvar SCC.

The material consisted of fresh frozen samples from 10 SCC of the vulva and two normal vulva specimens surgically removed at The Norwegian Radium Hospital (Table 1). The tumors have previously been examined for chromosomal aberrations and genomic imbalances as well as for expression of FHIT [2, 4] and HMGA2 [6]. The study was approved by the regional ethics committee (Regional komité for medisinsk forskningsetikk Sør-Øst, Norge, http://helseforskning.etikkom.no) and written informed consent was obtained from the patients.

This work was supported by grants from the Norwegian Radium Hospital Foundation.

The authors have no competing interest to disclose.

1. Wilkinson E. (2011). Premalignant and Malignant Tumors of the Vulva. In: Kurman R, Ellenson L and Ronnett B, eds. Blausteins Pathology of the Female Genital Tract: Springer US), pp. 55-103.