Lung cancer has been the leading cause of cancer-related deaths both worldwide [1] and in China [2], among which 85% are non small cell lung cancer (NSCLC), mainly including adenocarcinoma and squamous cell carcinoma [3]. A large number of NSCLC patients have been at advanced stage when diagnosed and the main treatment option for these patients is platinum-based double-agent chemotherapy. However, traditional cytotoxic therapies have reached an efficacy plateau, with most of the patients who respond to them eventually progress [4]. Fortunately, breakthroughs in the molecular pathogenesis of NSCLC have facilitated the development of treatment targeting specific signaling pathways, and shed new light on NSCLC therapies.

Rearrangement of anaplastic lymphoma kinase (ALK) gene is also a potential target in NSCLC, the most common of which is EML4-ALK translocation [5]. The subsequent EML4-ALK fusion protein will be constitutively activated and transformed, activating the Ras and phosphoinositide 3-kinase (PI3K) signaling cascades [6], which might result in more aggressive tumor characteristics and possibly aggravated prognoses [7]. Crizotinib is a small-molecule tyrosine kinase inhibitor (TKI) of MET, ALK [8–10] and ROS1 [11, 12] kinases, which was approved for ALK-positive NSCLC by the US Food and Drug Administration in 2011 [13]. Several clinical studies have reported that Crizotinib led to improved outcomes [14, 15] and was extremely well tolerated [16].

However, the efficacy of Crizotinib in controlling systemic cancer has not effectively translated to the control of intracranial disease, with up to 60% of the patients developing brain metastases during the Crizotinib treatment [17], which may result from the poor central nervous system (CNS) penetration [18]. Hitherto, several case reports [18–30] and subset analyses of clinical trials [31] have evaluated the benefit of Crizotinib in controlling brain metastases, with various outcomes. These case reports cover patients of different characteristics, which make the outcomes unavailable to be compared. Herein, we conducted a retrospective analysis in advanced ALK-rearranged NSCLC patients, with the purpose of exploring how Crizotinib affects the control of brain metastases and the overall prognosis in the real world in an Asian population.

Baseline demographic and clinical characteristics of the enrolled patients are summarized in Table 1. A total of 34 patients were available for this retrospective study, of whom 30 (88.2%) patients presented with stage IV disease at diagnosis, 20 (58.8%) had baseline brain metastases at the initiation of Crizotinib treatment. Patients for this analysis were relatively young (median age, 51.5 years; range, 24–84 years), with 24 (70.6%) patients younger than 60 years old, and most of them (67.6%) were non-smokers. All patients were determined ALK translocation (19 by FISH, 13 by Ventana IHC test, and the others by RT-PCR). Meanwhile, 21 of all the patients were EGFR mutation negative, and the other patients’ EGFR mutation status was unavailable. At the time of brain metastases development, patient ECOG PS was 0 (35.3% of patients), 1 (61.8% of patients), and 2 (2.9% of patients). After the brain metastases, 12 patients received local treatment (resection or radiotherapy) for brain metastases. A total of 27 patients (79.4%) developed extra-cranial metastases (ECM), including 12 bone metastases, 9 intrapulmonary metastases, 8 extra pulmonary lymph node metastases, 7 pleural metastases, 4 liver metastases and 2 mediastinal lymph node metastases. 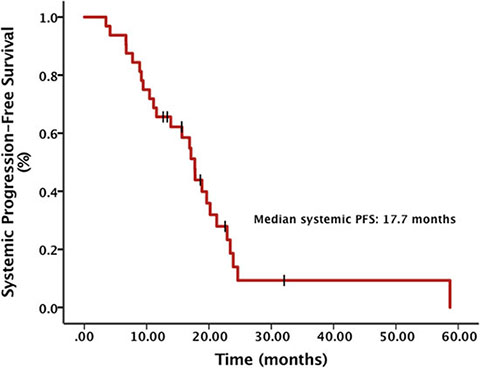 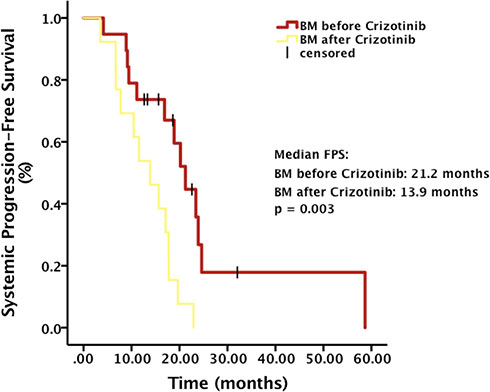 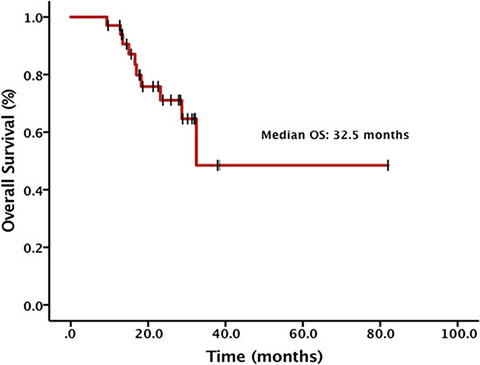 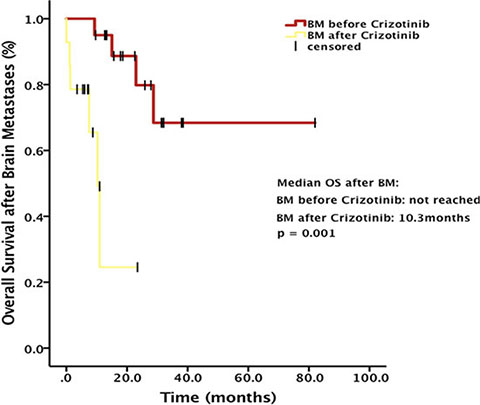 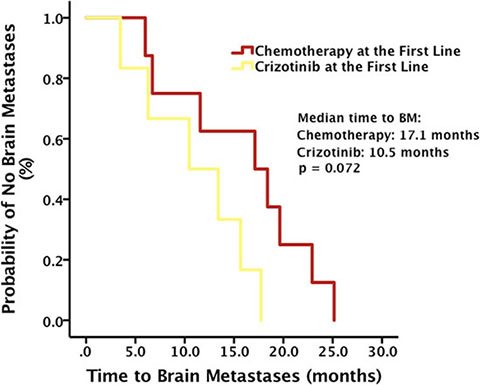 Crizotinib related adverse events (AE) that were found in > 5% of patients are summarized in Table 2. The most common AEs of all grades (in > 30% of all the enrolled patients) include cardiac disturbances (CK-MB elevation, 62.9%), hepatic disturbances (ALT increase, 42.9%) and endocrine disruptions (hypocalcemia, 34.3%). Dose reductions or temporary modifications were required in four patients due to the severe adverse reactions (one for prolonged QTc interval, one for hepatic disturbance, one for diarrhea and the other for hypocalcemia).

Brain metastasis in NSCLC patients, which develops in 15% to 40% of ALK-rearranged patients after first diagnosis [32–34] and in approximately one third after the failure of at least one prior systemic therapy [31], is often considered as the terminal stage of advanced disease. Crizotinib is thought to be a small-molecule ALK inhibitor with poor penetration of blood-brain barrier. A subset analysis of clinical trials PROFILE 1005 and 1007 has reported [31] that in ALK-rearranged advanced NSCLC patients treated with Crizotinib, the intracranial disease control rate (DCR) and ORR at 12 weeks were 56% (62%) and 18% (33%), with a median intracranial time to progression (TTP) of 7 months (13.2 months) in patients with previously untreated (treated) brain metastases, respectively. Lei YY et al. [35] has reported a similar ORR of Crizotinib between patients with and without baseline brain metastases (68.4% vs. 69.5%, p = 0.904) and a significantly longer median PFS of patients without baseline brain metastases (10.0 months vs. 7.0 months, p = 0.021). However, a mature overall survival of these patients are still rudimentary.

To our knowledge, our retrospective study of Crizotinib in patients with advanced ALK-rearranged NSCLC and brain metastases represents the first and the largest data focusing on the overall prognosis of Chinese population in the real world.

In our study, the systemic ORR of all the patients was 29.4% and the brain lesion ORR of patients with brain metastases before Crizotinib was 15.0%, which seemed to be obviously inferior to the results of clinical trials PROFILE 1005 and 1007. However, 1- and 2-year OS rates (76.2% and 64.9%) in our study were similar to those observed by Johung KL et al. (72% and 66%) in a multi-institutional study which provided the largest data set of long-term outcomes for ALK-rearranged NSCLC patients with brain metastases in USA [36].

There were several limitations for our current study. On the one hand, as a retrospective study involving patients from one cancer center, bias may have been introduced by the patient cohort. On the other hand, because of the relatively short follow-up time, we could see the trend that time to brain metastases was longer in patients receiving chemotherapy at the first line, compared with patients receiving Crizotinib, but the current result was not significant. Thus, a multicenter prospective study would be required to further confirm our results.

We retrospectively investigated advanced NSCLC patients with brain metastases who underwent Crizotinib treatment at the Cancer Hospital of the Chinese Academy of Medical Sciences (Beijing, China) between April 2013 and October 2015. Patients meeting the following criteria were included: having a pathological diagnosis of NSCLC, developing brain metastases either before or during the treatment of Crizotinib, having treated with Crizotinib at any line of treatment. ALK translocation was determined by Ventana IHC test, FISH or RT-PCR. Brain metastases were diagnosed by CT or MRI. In this study, Crizotinib was administered at a dose of 250 mg twice daily, with proper adjustments as needed. The follow-up was done by regular visits or telephone calls, and the information was collected into our database for analyses.

Statistical analyses were carried out by the SPSS 23.0 statistical software (SPSS, Inc., Chicago, IL, USA). Systemic OS and PFS after diagnosis of NSCLC were analyzed with Kaplan-Meier method. Kaplan-Meier analysis was also used to calculate OS after brain metastases, PFS and time to brain metastases stratified by patients or treatment characteristics. The median event time and corresponding 95% CI were also provided. The differences were assessed by the log-rank test. Statistical tests were two-sided, and p < 0.05 was considered significant.