Introduction: This study investigated the correlation between histologic predominant pattern and postrecurrence survival (PRS), and identified the clinicopathologic factors influencing PRS in patients with completely resected stage I lung adenocarcinoma.

Methods: A total of 136 stage I lung adenocarcinoma patients who experienced tumor recurrence after completely resection were included in this study. To analysis the association between histologic predominant pattern and PRS, invasive adenocarcinomas with mixed histologic components were divided into 2 groups: solid and nonsolid group (including lepidic, acinar, papillary, micropapillary) based on the histologic predominant pattern. PRS was analyzed to identify the prognostic predictors using the Kaplan-Meier approach and multivariable Cox models.

Results: For all stage I invasive adenocarcinoma patients, the majority of postsurgical recurrences occurred within 2 years. Patients with solid predominant histological pattern were associated with unfavorable PRS (HR, 2.40; 95%CI 1.13-5.08, p=.022). There was a significant difference for poor PRS for patients who diagnosed tumor recurrence shorter than 12 months after surgery (HR, 2.34; 95%CI 1.12-4.90, p=.024). Extrathoracic metastasis was associated with poor media PRS in univariable analysis (p =.011), however, there was no significant PRS difference in multivariable analysis (HR, 1.56; 95%CI 0.65-3.73, p=.322) compared with intrathoracic metastasis.

Lung cancer continues to be one of the most common causes of cancer-related death worldwide [1]. Adenocarcinoma is the most common histologic subtype, more than 80% to 90% of which demonstrated heterogeneous histologic patterns [2]. Despite the current standard completely surgical resection for patients with stage I non-small cell lung cancer (NSCLC), 30%-40% of these patients still will relapse [3]. The risk of recurrence peaked within the first 2 years after surgery [4, 5], and the majority of postoperative recurrence were detected in an asymptomatic condition during the regular follow-up period [6]. Previous reports demonstrated that gender, initial recurrence site, postrecurrence therapy and tumor cell differentiation were the prognostic factors of postrecurrence survival (PRS) [7]. However, the PRS for early stage lung adenocarcinoma patients still have not been thoroughly studied.

Since the new classification system for lung adenocarcinoma proposed by International Association for the Study of Lung Cancer (IASLC), American Thoracic Society (ATS) and European Respiratory Society (ERS) in 2011 [8], solid predominant histological subtype gradually proved to be associated with poorer recurrence free survival ( PRS) and overall survival (OS) [2, 9-12]. To date, few studies have focused on the correlation between histologic subtypes of lung cancer and the postrecurrence survival. Shimada et al [13] indicated that nonadenocarcinoma had a significant favorable PRS, while another large cohort study demonstrated that solid predominant histologic pattern was associated with shorter postrecurrence survival [14]. However, more studies are required to validate the conclusion derived from homogeneous research cohort. In this study, we examined the correlation between histologic predominant pattern and PRS, and identified other clinicopathologic factors influencing PRS. Our findings help to guide the postoperative management of patients with completely resected stage I invasive lung adenocarcinoma.

Table 1: Clinicopathologic variables in 136 patients with stage I lung adenocarcinoma

For the 136 patients who experienced recurrence, 41(30%) died (37 as a result of cancer-related disease). The median PRS was 15.97 months. There was a significant worse PRS (p = .024) for solid predominant pattern compared with nonsolid predominant pattern (Figure 1B). In order to identify weather the PRS was related to the period of recurrence free survival, we performed the survival analysis on two subgroups with different recurrence-free interval. Statistical significance were seen for poor PRS in early recurrence group (recurrence-free interval ≤12 months; p < 001; Figure 1C). 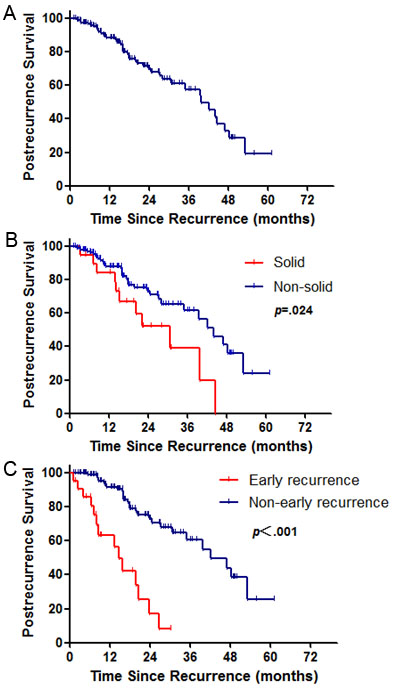 The retrospective study showed that solid predominant histological pattern was an independent primary tumor predictor for unfavorable postrecurrence survival for stage I lung adenocarcinoma patients. The majority of postsurgical recurrences occurred within 2 years. There was a significant difference for poor PRS for patients who diagnosed recurrence shorter than 12 months after surgery. Extrathoracicmetastasis was associated with poor media PRS in univariable analysis, however, there was no significant PRS difference in multivariable analysis compared with intrathoracic metastasis.

For others postrecurrence factors in predicting PRS, several published reports [4, 6] indicated that distant, extrathoracic metastasis and symptoms at the initial recurrence were predictors for poor PRS. Sugimura and co-workers [22] demonstrated that initial recurrence confined to lungs was correlation to better postrecurrence survival. In our study, the media PRS were 39.6 months in patients harbored extrathoracic metastasis, which significantly shorter than patients only detected intrathoracic recurrence. Advanced large cohorts are warranted to further confirm the conclusion.

There were several studies focused on the effect of postrecurrence therapy (PRT) on PRS among patients with resected stage I NSCLC. In Shimada’s [13] cohort, the majority patients who experienced recurrence received initial chemotherapy or second-line chemotherapy. Multivariate analysis indicated that PRT had a strong impact on PRS. In Hung’s cohort [5], no significant difference was seen in PRS between patients received re-operation and those who had chemotherapy and/or radiotherapy, but the conclusion needed further investigation. EGFR mutations were less likely to detect in solid predominant patients, which predicts primary resistance to tyrosine kinase inhibitors (TKIs) [24, 25]. This may another reason for the poor PRS among patients with solid predominant pattern. The underlying mechanism may validate by immunology, molecular biology and circulating tumor cells detect methods.

There were some limitations in the current study. Firstly, the retrospective study had an insufficient patient cohort, which only included 136 patients and selection bias is inevitable. Secondly, we used a homogeneous cohort, so the distribution of clinicopathologic characteristics might be different in other countries, patients selective bias was inevitable. The frequencies of the histologic predominant subtype of lung adenocarcinoma vary in previous reports [26, 27].The reason may causes by the different diagnostic experiences among pathologists, which may affect the conclusions. Thirdly, patients might receive surgery, chemotherapy, radiotherapy or immunotherapy after been diagnosed tumor recurrence, however, in this study, we didn’t analysis patients’ postrecurrence therapy, which may affect the postrecurrence survival.

In summary, solid predominant histological subtype has more aggressive behavior and is associated with unfavorable PRS for stage I lung adenocarcinoma patients. Patients who diagnosed tumor recurrence with 12 months after surgery have a significantly worse postrecurrence survival.

Institutional review board approval was obtained for this retrospective study from Shanghai chest hospital. Patients who underwent surgical resection for stage I lung invasive adenocarcinoma at Shanghai Chest Hospital between January 2009 and March 2015 were retrospectively reviewed. Patients who had multiple nodules, history of malignancies, adenocarcinomas in situ (AIS), minimally invasive adenocarcinoma (MIA), or had received neoadjuvant chemotherapies were excluded from this study. A total of 3536 patients with stage I lung adenocarcinoma were identified. Among them, 136 patients who experienced recurrence with complete medical records were included in our cohort.

For the 136 patients, two pathologists independently reviewed all hematoxylin and eosin (HE) stained slides of the surgically resected specimens. The criteria of the IASLC/ATS/ERS lung adenocarcinoma classification were used for histologic classification. [8] Invasive adenocarcinomas were divided into 5 subtypes: lepidic (LEP), acinar (ACN), papillary (PAP), micropapillary (MIP) and solid (SOL) predominant subgroup based on the greatest percentage of tumor histology presented in the slides, the percentage of each histologic pattern in 5% increments was recorded. For few of patients with LEP or MIP predominant pattern in our cohort, we divided the predominant pattern group into nonsolid (LEP, ACN, PAP and MIP) or solid group.

The TNM Staging was based on the 7th edition of the American Committee on Cancer (AJCC) cancer staging manual [28]. The clinicopathologic features including age, gender, tumor size, visceral pleural invasion, lymphovascular invasion and recurrence pattern were collected from medical records.

For all patients, preoperative examination including head, chest and upper abdomen CT scans, pulmonary function testing to exclude multiple nodules and distant metastasis. However, not all patients received postoperative follow-up in our hospital. For patients who were follow-up regularly in our out-patients center, the postoperative surveillance was performed as in our previous publication [29]: physical examination, blood tests, chest CT, neck and upper abdominal ultrasound examination were performed in every 3 months for the first year after tumor resection and at 6-month intervals thereafter. Whole-body bone scanning and magnetic resonance imaging (MRI) of the brain were performed annually. Additional imaging studies were performed if patients had any symptoms or signs of recurrence occurred regardless of the follow-up schedule. For patients who did not follow-up in out hospital, a telephone follow up were conducted to record the survival status as well as the results of previous examination performed in other hospitals. In order to accurately study the correlation between recurrence pattern and predominant histology subtypes, we excluded the patients who were obtained survival status from telephone follow-up for the incomplete medical records.

The χ2 test was used to compare between groups with respect to categorical and continuous variables. Cochran-Mantel-Haenszel test was used to estimate PRS. The log-rank test was used to compare the differences in PRS between histologic groups for univariable analysis. Multivariable Cox models stratified by trial and adjusted for gender, age, tumor size, visceral pleural invasion, lymphovascular invasion, histologic subtypes, adjuvant chemotherapy and TNM stage were used to measure the prognostic value in postrecurrence survival. The value of statistical significance was set to .05 (pooled analysis). Statistical analyses were performed using SPSS software (version 19; SAS Institute, Cary, NC) and GraphPad (Prism 5).