Colorectal cancer (CRC) is the fifth and fourth most commonly diagnosed cancer in males and females, respectively, and is the fifth most common cause of cancer-related death in China [1]. Colitis associated cancer (CAC) is a type of CRC that results from inflammatory bowel disease (IBD) [2, 3]. Traditional colorectal cancer therapies include surgical resection, chemotherapy, and radiotherapy [4]. In recent years, studies have investigated the influence of the tumor microenvironment on carcinogenesis and therapeutic efficacies [5, 6]. Tumor-associated macrophages (TAMs) that infiltrate tumors are abundant in the tumor microenvironment. TAMs play important roles in chronic inflammation and in the tumor microenvironment and not only promote tumor cell growth, but also affect the efficacy of different antineoplastic therapies [7–10].

The EGFR signaling pathway plays a crucial role in colon cancer survival, growth, and metastasis [19–21]. EGFR is overexpressed in 60-80% of colon cancers, and clinical studies of EGFR-targeted drugs have already been conducted [22]. Moreover, EGFR-targeted therapy might not only directly inhibit tumor cell growth, but also modulate the tumor microenvironment. For example, the EGF/EGFR pathway modulates cytokine profiles in breast cancer. Cannabidiol inhibits the EGF/EGFR pathway and alters cytokine production in tumor cells, leading to a reduction in the numbers of total and M2 macrophages at the primary and secondary tumor sites [23]. Inhibition of EGFR signals in human colon cancer also influences cytokine secretion [24]. However, whether the EGFR signaling pathway influences macrophage polarization in colorectal tumor microenvironment has not yet been investigated. 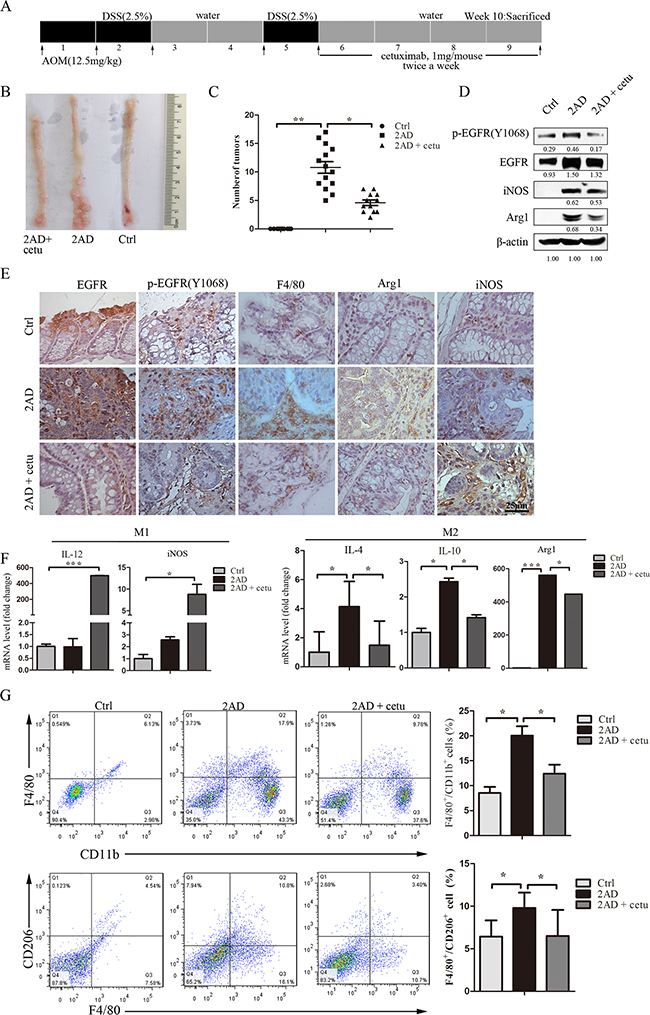 Western blot results showed that levels of p-EGFR (Y1068), EGFR, Arg1, and iNOS proteins were higher in AOM/DSS mice than in normal mice. Treatment with cetuximab reduced levels of all of these proteins, except for iNOS, compared to 2AD mice (Figure 1D). Immunohistochemistry results were consistent with these findings. p-EGFR (Y1068) and EGFR levels were higher in 2AD mouse adenomas. F4/80-positive macrophage infiltration was present in 2AD and 2AD + cetu mice. Arg1 positive macrophages were abundant in 2AD mice, but rarely detected in normal mice and 2AD + cetu mice (Figure 1E). We then measured the expression of typical M1 and M2 macrophage marker mRNAs. Expression of iNOS and IL-12, which are typical M1 markers, did not differ between 2AD and normal mice, but were higher in 2AD + cetu mice (Figure 1F). In contrast, Arg1, IL-10, and IL-4, which are typical M2 markers, were higher in 2AD than in normal mice, and cetuximab treatment inhibited Arg1, IL-10, and IL-4 mRNA expression (Figure 1F). 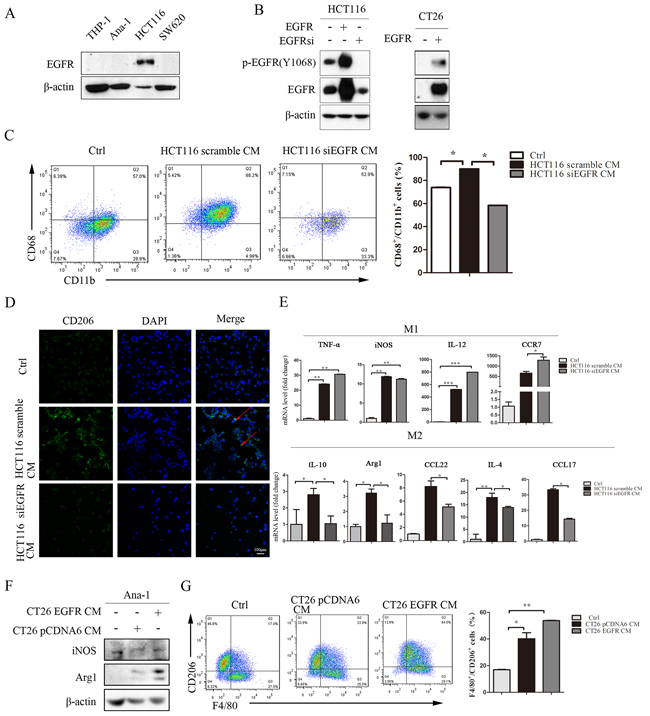 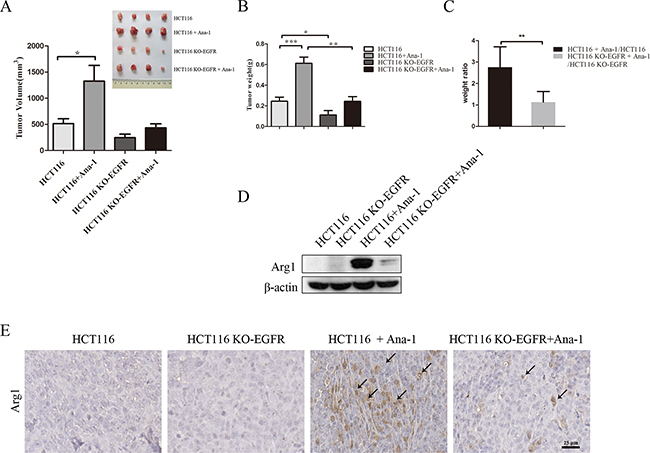 To investigate the mechanism by which conditioned medium promoted macrophage polarization, we performed a cytokine antibody array to compare differences between HCT116 siEGFR CM and HCT116 CM. We found that the IGF-1 concentration in HCT116 siEGFR CM was 53% of that in HCT116 CM (unpublished data). IGF-1 is a cytokine and a hormone factor, and might play a role in macrophage polarization [27]. Next, we examined whether IGF-1 levels in colon cancer CM were regulated by the EGFR pathway. Soluble IGF-1 in colon cancer CM was detected by ELISA. IGF-1 concentrations were higher in SW620 EGFR CM than in SW620 CM (Figure 4A). Overexpression of EGFR increased, and EGFR knockout decreased, IGF-1 secretion and mRNA expression in HCT116 cells (Figure 4B and 4C). We also investigated IGF-1 mRNA expression in AOM/DSS mouse colon tissues; IGF-1 expression was higher in 2AD mice than normal mice, and cetuximab treatment inhibited this increase in IGF-1 expression (Figure 4D). 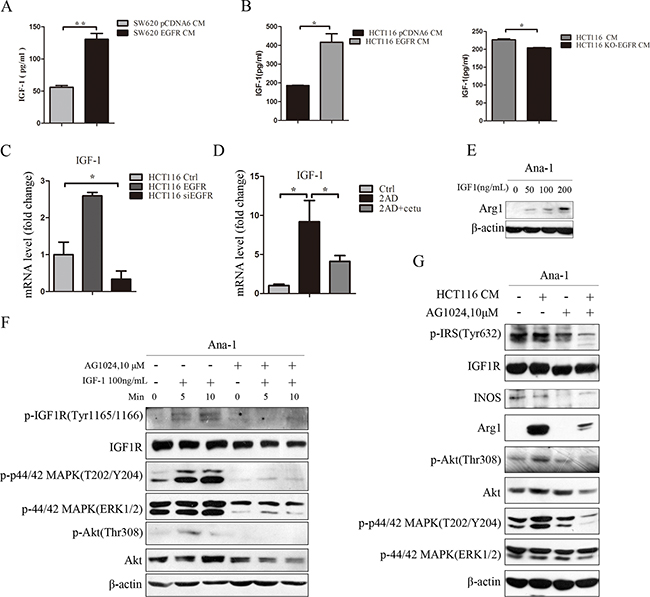 The EGFR signaling pathway plays a critical role in colonic tumorigenesis [28] and is a target of many cancer therapies. The anti-EGFR monoclonal antibodies cetuximab (Erbitux™, Bristol Myers Squibb and Merck KGaA) and panitumumab (VectibixTM, Amgen) are approved for the treatment of metastatic colorectal cancer (mCRC) [29, 30]. In recent years, EGFR-targeted therapy has been reported to not only inhibit tumor cells, but also reduce the secretion of GM-CSF, CCL3, TGF-α, bFGF, and VEGF, further affecting the tumor microenvironment [23, 24]. In this study, we found cetuximab reduced both tumor growth in an AOM/DSS mouse model and F4/80+/CD206+ macrophage populations. Experimental colitis colonic and peritoneal macrophages and human CD14+ monocytes have been reported to express EGFR [26, 31], but we did not detect EGFR expression in Ana-1 and THP-1 cells here (Figure 2A). Cetuximab might therefore modulate the secretion of various factors from tumor cells and thus inhibit macrophage accumulation and polarization.

Colon cancer tissues contain large numbers of TAMs, which comprise the majority of immune cells within these tumors. Some studies have found that TAMs promote tumor progression in CRC patients; CD68+ macrophages are used as a marker of progression, and CD163+ macrophages are associated with early local recurrence and reduced survival times [49, 50]. Other studies indicate that macrophages inhibit tumor progression in CRC patients [51, 52]. However, the M1/M2 ratio in CRC patients is much higher than in prostate cancer patients, suggesting that M1 macrophages may be more important in CRC [52]. It is possible that the M1/M2 ratio rather than the total number of macrophages determines whether these cells promote or inhibit tumor growth. Moreover, TAMs that infiltrate the tumor invasive margin may be exposed to different tumor microenvironment signals than those that infiltrate the tumor stroma, possibly accounting for the different effects of TAMs on colon tumor growth [51, 53]. Because they are exposed to fewer signals produced by tumor cells, anti-tumor M1 polarization might predominate in peritumoral macrophages; in contrast, tumor microenvironment signals might increase pro-tumor M2 polarization in intratumoral macrophages. In our xenograft model, differences in the numbers of M2 macrophages rather than in total numbers of macrophages, which were similar among the groups, determined whether these cells inhibited or promoted tumor growth. Therefore, blocking tumor-induced M2 macrophage polarization might be a potential treatment strategy for inhibiting tumor growth. 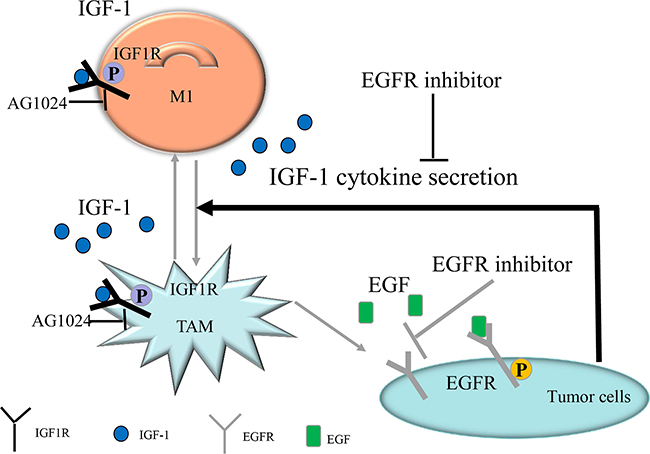 BMDMs grown in macrophage colony-stimulating factor (M-CSF) were generated as previously described [35]. Briefly, BMDMs were isolated from the femurs of 4-5-week old C57 BL/6J mice, filtered through a 70 μm filter, and cultured in DMEM media supplemented with 10% heat-inactivated-FCS in the presence of M-CSF (10 ng/mL, R&D Systems). On day 3, non-adherent cells were discarded and adherent cells were cultured for an additional 3 days. On day 7, the culture medium was replaced with medium conditioned by tumor cells; 48 h later, the cells were collected and used in subsequent experiments.

For the tumor xenograft model, 5-week-old female Balb/c athymic nude mice received 0.1 mL subcutaneous injections of 1×107/mL HCT116 or HCT116KO-EGFR cells with or without 1×106/mL Ana-1 cells. After 18 days, the mice were sacrificed. Tumor tissues were weighed and tumor volumes were calculated according to the formula length×width2×0.5. All experimental procedures using animals were reviewed and approved by the Institutional Animal Care and Use Committee (IACUC) at the Cancer Hospital of the Chinese Academy of Medical Science.

Colon cancer cells were cultured to 50% confluence and transfected with human EGFR siRNA or pCDNA6A-EGFR WT plasmid for 24 h. After replacement with fresh medium, cells were cultured for an additional 24 h. Tumor cell conditioned medium was collected and centrifuged at 3000 rpm for 10 minutes. THP-1 cells were pretreated with 320 nM phorbol 12-myrisatate13-acetate (PMA, Sigma-Aldrich) for 72 h and thoroughly washed five times with 0.9% saline, and Ana-1 and THP-1 cells were then cultured with 2 mL conditioned medium for 48 h. Ana-1 cells were then incubated with human and mouse recombinant IGF-1 (R&D Systems, Minneapolis, MN, USA) for 48 h. IGF1R signaling was blocked with IGF1R inhibitor AG1024 (Selleck Chemicals, Texas, USA) and IGF-1 neutralizing antibody (R&D Systems) to confirm the role of IGF-1 in conditioned medium-driven macrophage polarization.

Cytokine IGF-1 levels were measured by enzyme-linked immunosorbent assay (ELISA) using an ELISA kit (R&D Systems). The ELISA was performed according to the manufacturer’s protocol.

All results are expressed as means ± SD. Paired, two-tailed Student’s t-tests were used to identify significant differences between treatment and control groups. A p value of less than 0.05 was considered statistically significant. All analyses were conducted with GraphPad Prism5 software. Figures show the averages of three independent experiments.

17. Mantovani A, Sica A, Sozzani S, Allavena P, Vecchi A and Locati M. The chemokine system in diverse forms of macrophage activation and polarization. Trends in immunology. 2004; 25:677-686.

25. Hotz B, Keilholz U, Fusi A, Buhr HJ and Hotz HG. In vitro and in vivo antitumor activity of cetuximab in human gastric cancer cell lines in relation to epidermal growth factor receptor (EGFR) expression and mutational phenotype. Gastric cancer. 2012; 15:252-264.

43. Singh P, Dai B, Yallampalli U, Lu X and Schroy PC. Proliferation and differentiation of a human colon cancer cell line (CaCo2) is associated with significant changes in the expression and secretion of insulin-like growth factor (IGF) IGF-II and IGF binding protein-4: role of IGF-II. Endocrinology. 1996; 137:1764-1774.

54. Hsu SC and Hung MC. Characterization of a novel tripartite nuclear localization sequence in the EGFR family. The Journal of biological chemistry. 2007; 282:10432-10440.