Galectin-7 is a member of a family of proteins with affinity for β-galactosidase–containing oligosaccharides. Galactin-7 contains one carbohydrate recognition domain (CRD) in its biological structure and functions as a homodimer [1-2]. In contrast to other galectins such as galectin-1 and -3, the function of galectin-7 is still largely unknown. It is known to interact with a wide range of potential receptors, including non-reducing terminal LacNac residues and internal LacNac oligosaccharide residues, but its carbohydrate binding affinity is weaker than that of galectin-1 and -3 [3]. It has been suggested that the function of galectin-7 may vary according to its cellular localization because the protein is present in the nucleus and the cytoplasm, and also in the cell-to-cell contact region. 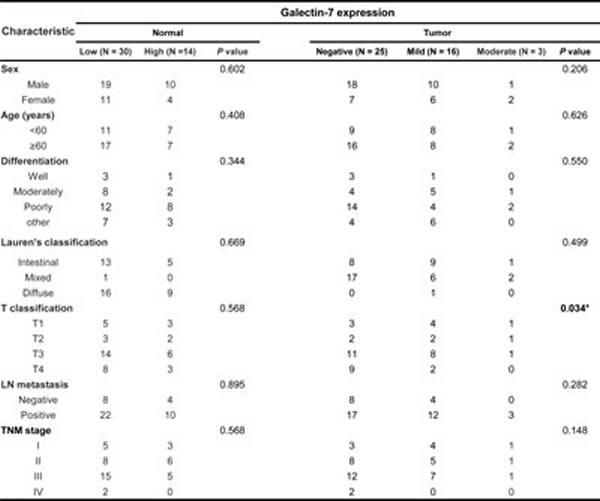 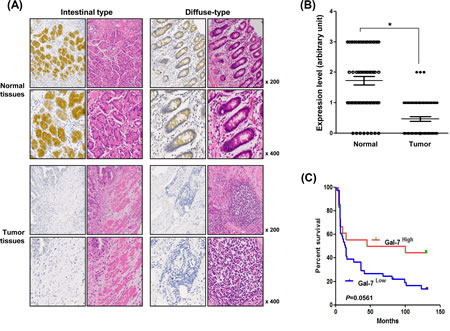 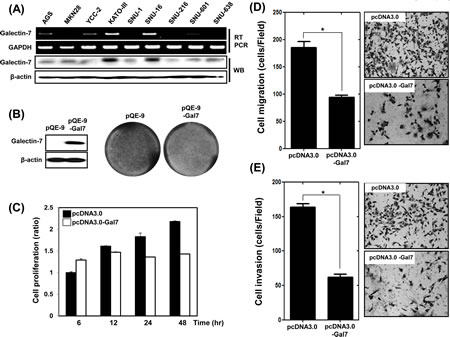 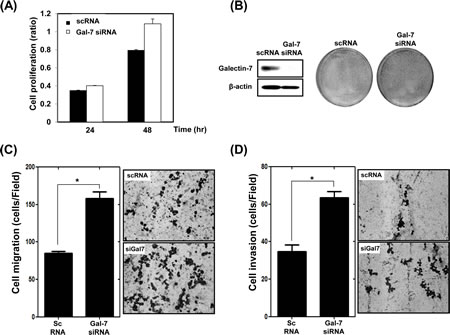 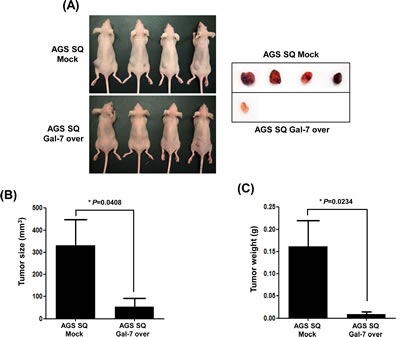 Figure 4: The effect of galectin-7 over-expression on tumor growth of xenografts in nude mice. AGS SQ cells (100 µl; 1 × 106 cells) in Matrigel were implanted into Balb/c-nude mice to form subcutaneous xenografts. After 8 weeks the mice were sacrificed, the tumors were photographed (A), and tumor size (B) and weight (C) were measured. The p value for tumor size and weight (* p=0.048 and 0.0234 vs. Mock groups) was calculated using Student’s t-test. 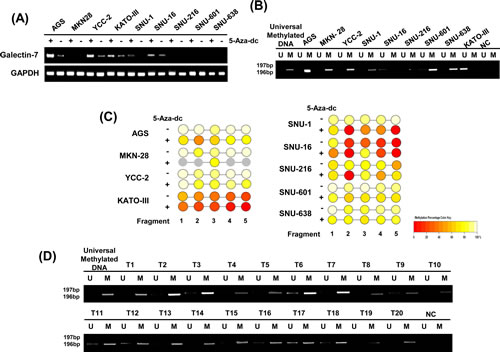 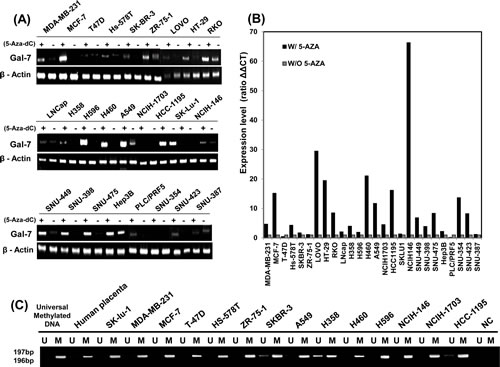 Gastric cancer is difficult to cure unless it is found at an early stage before it has begun to spread. Unfortunately, because early stomach cancer causes few symptoms, the disease is usually advanced when the diagnosis is made [16]. Treatment for stomach cancer may include surgery, chemotherapy, and/or radiation therapy. Even patients who present in the most favorable condition and undergo curative surgical resection often die of recurrent disease [17]. Therefore, it is extremely important to discover a biomarker to determine the condition or stage of gastric cancer in order to improve patient survival. In this study, we suggest that galectin-7 functions as a gastric cancer suppressor. We show that the expression of galectin-7 was lower in malignant tissues than normal gastric tissues, and over-expression of galectin-7 suppressed the proliferation, migration, and invasion of gastric cancer cells. However, the role of galectin-7 in cancer tumorigenesis remains unclear because there are several conflicting reports of galectin-7 function. At first, galectin-7 was considered a pro-apoptotic factor via p53 [6-7, 10-11, 18]. However, its role in promoting tumor malignancy was also described in several reports [19-21], and galectin-7 expression was linked to increased metastatic phenotype in breast cancers [15] and migration of corneal epithelial cells [22]. The increase in tumor malignancy and metastatic phenotype were attributed to the induction of MMP-9 expression by galectin-7 [12, 23-24]. Therefore, we aimed to elucidate the mechanism by which galectin-7 suppresses gastric cancer proliferation and invasion.

In conclusion, given the importance of early detection for improving gastric cancer survival outcomes, the results of this study indicate that DNA methylation of galectin-7 is a promising candidate biomarker for application in gastric cancer. However, it is necessary to analyze a larger number of gastric cancer patient samples to confirm these findings. Moreover, the role of galectin-7 in gastric tumorigenesis should be further examined in future studies.

Two pairs of 2-mm tissue biopsy specimens were obtained from 20 patients with gastric adenocarcinoma during diagnostic endoscopy and endoscopic submucosal dissection. All experiments were approved by the Institutional Review Board of the National Cancer Center, approval number NCCNSH 03-024. All participants provided written informed consent for the use of tissues for comprehensive experiments on gastric cancer. For immunohistochemical analysis, core tissue biopsy specimens (2-mm diameter) were obtained from Superbiochips Laboratories (Seoul, Korea). Immunohistochemical analysis was performed as described previously [31-32] and anti-galectin-7 antibody was kindly provided by Moon-jae Cho (Jeju University).

All animal experiments were approved by the Yonsei University Medical School animal care and use committee (2012-0132) and were performed in specific pathogen-free facilities under conditions in accordance with the Guidelines for the Care and Use of Laboratory Animals of YUMS. The preparation of xenografted mice has been described in a previous study [31]. Galectin-7 overexpression vector pQE-9-Galectin-7, kindly provided by Moon-jae Cho (Jeju University), was transiently transfected into cells using Lipofectamine 2000 reagent (Invitrogen) according to the manufacturer’s instructions.

Western blot analysis was carried out using methodology from a previous study [32]. The primary antibodies for galectin-7 and β-actin, and HRP-conjugated goat anti-mouse or goat anti-rabbit IgGs were purchased from Santa Cruz Biotechnology and the signals were detected using an enhanced chemiluminescence (ECL) plus kit (Amersham Life Science) and a LAS-3000 (Fujifilm) detector according to the manufacturer’s directions.

RNA was isolated using TRIzol○RRReagent (Invitrogen) according to the manufacturer’s instructions and RT-PCR was performed using a Reverse Transcription system (Promega, Madison, WI, USA). The primers used were as follows: Galectin-7, 5’-ATGTCCACCGTCCCCCACAAG-3’ and 5’-TGACGCGATGATGAGCACCTC-3’; β-actin; 5’-AGCCTCGCCTTTGCCGA-3’ and 5’- CTGGTGCCTGGGGCG-3’. PCR was performed following Ex-taq (TaKaRa, Shiga, JAPAN) protocols. Real-time PCR analysis of the galectin-7 gene was performed using ABI PRISM (Applied Biosystems) according to the manufacturer’s instructions with the following primer sequences specific for Galectin-7: 5’-CCTTCGAGGTGCTCATCATC-3’ and 5’-GAAGATCCTCACGGAGTCCA-3’. cDNA was used as a template and product was detected with the intercalating agent SYBR green I dye.

The first step of methylation analysis is bisulfite conversion of genomic DNA. Bisulfite treatment converts cytosine to uracil (thymine in DNA) by bisulfite-deamination, but in 5-methyl cytosine the position 5-methyl group inhibits deamination of the amino group. Therefore, 5-methyl cytosine remains as cytosine but unmethylated cytosine is converted to uracil. One microgram of gDNA was bisulfite treated using the EZ DNA Methylation-Gold Kit according to the manufacturer’s instructions with a GeneAmp PCR system 9700 (Applied Biosystems). Briefly, 1 µg of gDNA was mixed with bisulfite treatment solution and incubated at 98°C for 10 min and 64°C for 150 min. Samples were loaded onto a column, washed with ethanol solution, and incubated with desulphonation solution for 20 minutes at room temperature. After washing, the bisulfite-treated DNA was eluted and analyzed using a Nanodrop spectrophotometer (Thermo Scientific).

For quantitative analysis of the DNA methylation status of the LGALS7 gene, we searched the promoter sequence using the “Transcriptional Regulatory Element Database” freeware program and designed primer sequences (+912 to +2250) using SEQUENOM EpiDesigner software as shown in Supplementary figure 1A.

PCR primers were designed using the Meth primer v1.1 beta version Software to amplify a region from -3000 to +2550 within the galectin-7 (LGALS7) gene (Supplementary Fig 1B). This primer set was used to verify the presence of the galectin-7 gene in cancer cell lines and gastric cancer patient tissues and for sequencing of the promoter region. An unmethylated (U)-specific set of primers: TTTTAATTTTTGGTTGGATATGTTG (forward) and CTCCAAAAACCTAAATCTTAA CATC (reverse), and a methylated (M)-specific set of primers: TTTAATTTTCGGTTGGATACGTC (forward) and CTCCAAAAACCTAAATCTTAACGTC (reverse) were designed based on the positive strand of the bisulfite-converted DNA and spanned a region within the CpG island of the promoter. The experiments were performed as described previously [33].

Data for cell proliferation, cell migration, and invasion assay were obtained from at least three independent experiments and are presented as mean ± SD, unless otherwise indicated. Statistical analysis was performed using Student’s t-test. The Χ2 test was conducted to determine the significance of the difference between covariates. Survival durations were calculated by the Kaplan-Meier method. The log-rank test was used to compare cumulative survival among the patient groups. Statistical significance was set at p<0.05 throughout the study. The Med-Calc software program (version 11.4; MedCalc Software, Mariakerke, Belgium) was used for all analyses.

This study was supported by grant of the Korea Health Technology R&D Project, Ministry of Health & Welfare (HI11C0926) and faculty research grant of Yonsei University College of Medicine for 2012 (6-2012-0047).

Authors have no conflict of interests