The recognition of a subgroup of patients with NSCLC harboring mutations of EGFR that exhibit a favorable response to tyrosine kinase inhibitor (TKI) has changed the treatment patterns and outcomes of NSCLC [4–6]. Several randomized studies demonstrated that, for EGFR mutated NSCLC, first-line TKI therapy could provide higher tumor response rates (RR) and longer progression-free survival (PFS) than chemotherapy. However, most of these studies failed to demonstrate improvement in overall survival (OS) [7–12]. The failure might be explained by the high proportion of patients from the chemotherapy arm crossing over to the EGFR TKI arm on progression [13, 14]. Patients with EGFR mutations may also benefit from second- or third-line EGFR TKI therapy. Therefore, this raises the question of whether TKI is more effective in EGFR mutated NSCLC patients as a first-line therapy or is equally effective when administered as a second-line therapy [15].

In this study, we summarized the clinical data from patients at Shanghai Chest Hospital in order to compare the outcomes from TKIs used in first- or second-line therapy for advanced NSCLC patients with sensitive EGFR mutations. 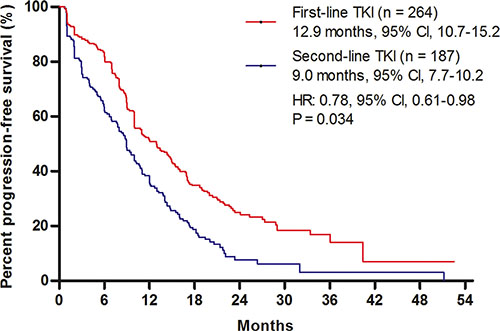 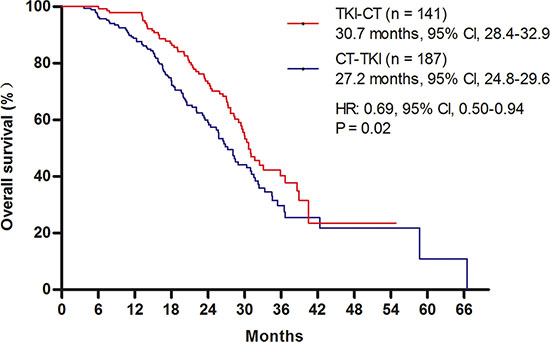 In conclusion, compared with second-line TKI, first-line therapy achieved a longer PFS and a higher ORR in advanced NSCLC patients harboring sensitive EGFR mutations. The therapeutic strategy of using TKIs followed by chemotherapy can achieve longer OS than that using chemotherapy followed by TKIs, therefore this strategy should be considered as an optimal treatment option.

This study was designed to compare first- and second-line EGFR TKI therapies in patients with sensitive EGFR mutations. The study was approved by the Institutional Review Board of the Shanghai Chest Hospital. All of the patients were diagnosed with advanced NSCLC (stage IV) at the Shanghai Chest Hospital between January 2009 and December 2013. Baseline clinical characteristics included age at diagnosis, tumor histology, smoking history, and sex. We also abstracted treatment details, such as first- and second-line therapies, and the dates at which each line of therapy started. The inclusion criteria were (1) a pathologically confirmed advanced NSCLC, (2) a sensitive EGFR mutation consisting of an exon 19 deletion or an exon 21 point mutation (L858R), and (3) EGFR TKI therapy. Patients without survival and therapy details were excluded. The primary outcome was OS.

For descriptive purposes, demographic and clinical data are summarized as medians with ranges for continuous variables, and categorical variables are expressed as summarized by the means of absolute and percentage numbers. The associations between patient demographics were examined using Pearson’s χ2 test. Survival results are summarized as median values and two-sided 95% confidence intervals (CIs), and were analyzed using Kaplan–Meier analyses, whereas the log-rank test was used for comparisons among subgroups. Multivariable adjusted hazard ratios (HRs) for all-cause mortality by patient and treatment pattern were estimated using Cox regression. HRs were calculated along with their corresponding 95% CIs as measurements of association. Statistical significance was defined as P < 0.05. SPSS software, version 22 (SPSS Inc., Chicago, IL, USA) was used for all statistical analyses.

This study was supported by the Key Projects of the Biomedicine Department, Science and Technology Commission of Shanghai Municipality (Project No. 11411951200). The funding agencies played no role in the study design, data collection and analysis, decision to publish, or preparation of the manuscript.