Nasopharyngeal carcinoma (NPC) is endemic in southern China and Southeast Asia, but rare in European and American countries [1–4]. Radiotherapy is the main therapeutic option and chemotherapy is often used in advanced cases. Distant metastasis, most commonly to bone, lung or liver, is the main cause of treatment failure [5]. Distant metastases are observed in 5% of newly-diagnosed NPC cases and are estimated to occur in about 21.2–41.8% of patients within 5 years of radiotherapy [6]. The incidence of distant metastasis is higher in patients with advanced disease, and the molecular mechanisms of NPC progression and metastasis are still unclear.

Though IGFBP6 appears to act as an inhibitory agent in various tumors, some studies found that it stimulated growth in a smaller number of tumors [12]. In ovarian cancer cell lines, differential effects of IGFBP6 on migration were observed [24]. Increased IGFBP6 expression correlated with increasing degrees of brain tissue invasion by meningioma cells [25, 26]. Only one report proposed that IGFBP6 acts as a tumor suppressor gene in NPC [27], and the biological functions of IGFBP6 in NPC progression remain unclear. In the current study, we explored the effects of IGFBP6 on NPC progression and evaluated IGFBP6 as a potential independent NPC prognostic biomarker.

We examined IGFBP6 protein levels in biopsy specimens from primary and advanced NPC patients. Seventy-six specimens were assessed from September 1998 to December 2004, including 58 male and 18 female cases. The median patient age was 47 years (range, 23–64). All specimens were graded using pathologic and clinical stage. Immunohistochemical (IHC) staining revealed differential IGFBP6 expression in NPC specimens. Positive cytoplasmic IGFBP6 staining was brown, and was not observed in negative or isotype controls (Figure 1A). Fifty-four out of 76 NPC cases (71.1%) exhibited positive IGFBP6 staining, and 22 (28.9%) were negative. No correlation was found between IGFBP6 expression and patient gender, age, T classification, N classification or clinical stage (Table 1). 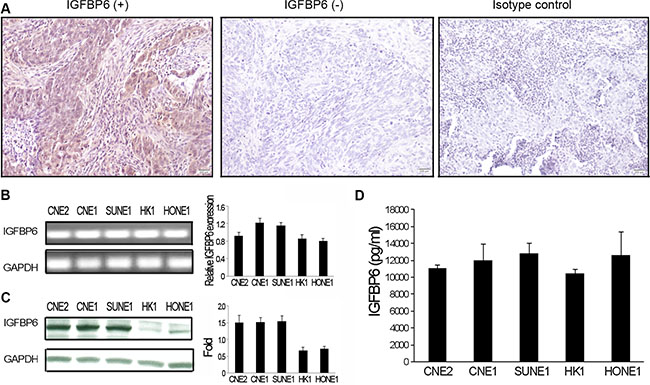 Table 1: Correlation of IGFBP6 expression with clinical characteristics in patients with NPC 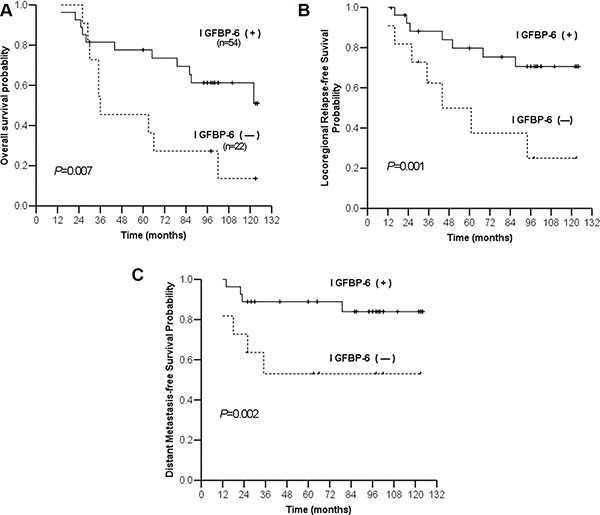 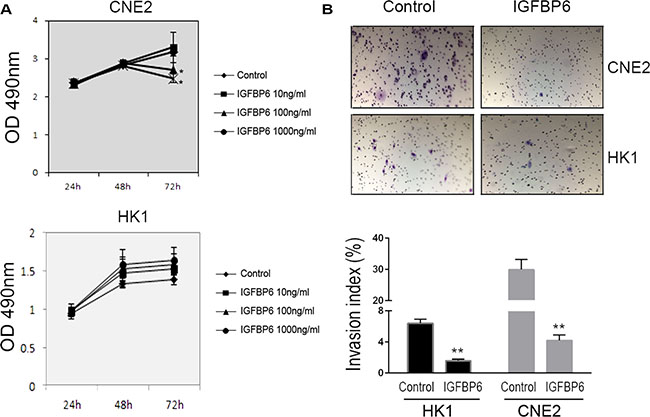 We injected CNE2 cells transfected with either ctrl-shRNA or IGFBP6-shRNA into the left ventricles of severe combined immunodeficiency (SCID) mice to assess tumor cell metastasis. Three weeks post-injection, mice were sacrificed and evidence of distant organ metastasis was evaluated histologically. IGFBP6 knockdown promoted metastasis: 15/15 mice in the IGFBP6-shRNA group, but only 5/15 in the Ctrl-shRNA group, showed evidence of metastasis (Table 3). Mice injected with IGFBP6-shRNA-transfected cells had higher metastasis rates, and tumor cells metastasized to multiple distant organs, such as liver, lung, bone, kidney and intestine (Figure 5). 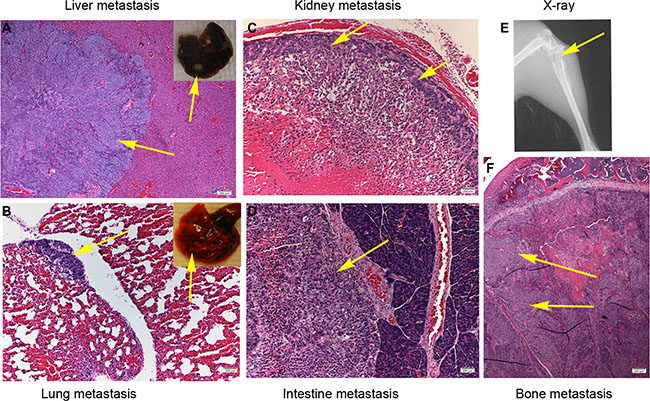 To date, radiation therapy is the main treatment strategy for NPC patients, and prognoses are mainly based on clinical stage. However, some patients with early stage disease experience locoregional relapse and distant metastasis shortly after treatment, while some advanced stage patients achieve long-term survival. This may be due to the biological heterogeneity of NPC. Therefore, novel prognostic markers and therapeutic targets are needed to guide and improve individual NPC patient treatment strategies.

Aberrant stimulation of the IGF axis can contribute to cancer development and progression [8]. However, few studies have provided insight into the effects of IGFs or IGFBPs on NPC. One report showed that EGF and IGF-I receptor levels were higher in several NPC cell lines as compared to normal nasopharyngeal epithelial cells [28]. Fung, et al. reported that IGF receptor II was overexpressed in malignant nasopharyngeal epithelial cells [29]. Only one in vitro study proposed that IGFBP6 is a tumor suppressor in NPC [27].

The current study found that IGFBP6 was differentially expressed in NPC tissues. Positive IGFBP6 expression was associated with reduced locoregional relapse and distant metastasis risk. Multivariate analysis in a Cox model showed that IGFBP6 was an independent prognostic biomarker for locoregional relapse and distant metastasis in NPC patients. Consistent with our findings, Zhang, et al. identified chemokine (C-C motif) ligand 18 (CCL18) and IGFBP6 as novel serum biomarkers for prostate cancer [30]. IGFBP6 levels increased after Diethylstilbestrol treatment, and recombinant IGFBP6 inhibited cell proliferation [18]. Serum IGFBP6 concentrations were lower in breast cancer patients as compared to those with benign breast disease [31]. These findings suggest that IGFBP-6 may serve as a marker in multiple cancers [32].

We also measured IGFBP6 in the NPC cell lines, CNE2, CNE1, SUNE1, HK1 and HONE1, all of which expressed IGFBP6 at different levels. We found that exogenous rhIGFBP6 decreased CNE2 cell proliferation and invasion in vitro. RhIGFBP6 reduced HK1 cell invasion, but had no effect on proliferation. IGFBP6 knockdown in CNE2 cells promoted tumor cell metastasis in vivo. These results implied that IGFBP6 expression suppresses NPC metastasis. Compared to controls, the GSK3β/β-catenin/cyclin D1 pathway was activated in CNE2 cells transfected with IGFBP6-shRNA. Cyclin D1 expression and GSK3β phosphorylation increased, and β-catenin accumulated in transfected cells. To the best of our knowledge, this study is the first to provide direct evidence that IGFBP6 inhibits NPC metastasis via GSK3β/β-catenin/cyclin D1 pathway activation.

Our results demonstrate that IGFBP6 may act as a novel prognostic biomarker in NPC. More aggressive treatments, such as targeted chemotherapy, may be advised in NPC patients negative for IGFBP6, who are more likely to experience distant metastasis.

SCID mice (Charles River, Wilmington, MA), 6 weeks of age, were housed under pathogen-free conditions in accordance with NIH guidelines. The animal protocol was approved by the Institutional Animal Care and Use Committee, University of Pittsburgh.

Tumor tissues collected from 76 advanced NPC patients between September 1998 and December 2004 were obtained from the Sun Yat-sen University Cancer Center in Guangzhou, China. All NPC clinical diagnoses were confirmed by histopathologic examination. The University Institutional Review Board (IRB) approved the specimen collection and experimental protocols. Radiotherapy techniques and dose schedules were the same for all patients. Patients consented and were treated with a uniform radiotherapy protocol in line with the NPC treatment policy of Sun Yat-sen University Cancer Center.

After treatment completion, patients were followed up at least every three mo during the first three years and every six mo thereafter until death. Nasopharyngoscopy, MRI of the head and neck, chest radiography and abdominal sonography were routinely performed annually or at the time of tumor relapse.

Conditioned media (CM) was obtained from selected NPC cell cultures. Briefly, 2 × 106 cells per dish were plated in 10-cm tissue culture dishes for 12 h in DMEM with 10% FBS. Media were then changed to 10 ml DMEM plus 1% FBS and supernatants were collected 48 h later. To normalize for cell density differences due proliferation during the culture period, cells from each plate were collected and total DNA content/plate was determined (spectrophotometric absorbance, 260 nm). CM was normalized for DNA content between samples by dilution with DMEM.

Cell proliferation was measured using a CellTiter 96 AQeous Non-Radioactive Cell Proliferation Assay (Promega, Madison, WI). Briefly, cells were plated into 96-well plates at 3000 cells/well overnight. The next day, media was changed to 100 μL of DMEM plus 1% FBS. Indicated rhIGFBP6 concentration (0–1000 ng/mL) were added into the cultures. Cells were incubated at 37°C in a humidified 5% CO2 atmosphere for 24, 48 or 72 h, then 20 μL of combined MTS/PMS solution was added. After incubation for 2 h at 37°C, absorbance at 490 nm was recorded for each well using an ELISA plate reader. Data represent the average absorbance for quadruplicate wells.

Cells were seeded in 24-well Matrigel invasion chambers (BD Biosciences, Bedford, MA) and cell migration and invasion assays were performed as previously described [35]. Briefly, cells were cultured in serum-free medium for 24 h, then collected and seeded at 5 × 104 in 0.5 mL DMEM containing 0.2% BSA into the upper compartment of wells. 0.75 mL DMEM containing 10% FBS was placed into the lower compartment. Recombinant IGFBP6 (100 ng/mL) was placed in the indicated wells. Transwell chambers were incubated for 24 h at 37°C with 5% CO2. Then, cells in the upper chamber were removed. Cells that had invaded through the Matrigel matrix membrane were stained with crystal violet after fixation with paraformaldehyde. Invaded cells were quantified by counting cells that penetrated the membrane in ten microscopic fields (at 200× magnification) per filter. Invasive index was defined as the proportion of cells that penetrated the Matrigel-coated membrane to the number of cells that migrated through the uncoated membrane.

Cells were seeded into 24-well tissue culture plates at 1 × 105cells/well for 24 h. Then, the monolayer of each well was gently scratched with a 200-μL pipette tip across the center. The gap distance equaled the outer diameter of the end of the tip. In each well, the first straight-line scratch was crossed by a second straight-line scratch perpendicular to the first, creating a cross in each well. After scratching, wells were gently washed twice with medium to remove detached cells. Media were replenished and cells were allowed to grow another 24 h. Photos of each well were then taken under a microscope. Gap distances and areas were quantitatively evaluated using Image J software. Quadruplicate views of each well were documented, and each experimental group was repeated three times.

Single-cell suspensions of IGFBP6 knockdown CNE2 cells (IGFBP6-shRNA) or CNE2 cells with ctrl-shRNA (5 × 105 cells in 20 μL PBS) were injected into the left ventricle of SCID mice (n = 15/group). Tumor cells were allowed to grow for three weeks, at which time mice were sacrificed. Evidence of distant organ tumor metastasis was evaluated histologically.

Tissue slides were stained following a modified protocol [36]. Briefly, slides were heated at 56°C for 45 min, deparaffinized and rehydrated, then immersed in 3% hydrogen peroxide for 10 min. Slides were incubated for 24 h at 4°C with anti-human IGFBP6 antibody (1:30 dilution) or isotype control mouse IgG2b (1:30 dilution). Biotinylated anti-mouse antibody (1:200) was used as the secondary antibody. After incubation in avidin-biotin complex solution, stain was developed using the diaminobenzidine method, followed by counterstaining with hematoxylin. Sections were analyzed using a Nikon NIS-Elements microscope. Immunostaining intensity was assessed independently by two clinical pathologists in a blinded manner. IGFBP6 protein staining was scored as negative (IGFBP6(−)) or positive (IGFBP6(+)) [37].