Tuberculosis (TB) is a highly infectious respiratory disease that remains one of the world’s deadliest communicable diseases. According to the World Health Organization (WHO), an estimated 9 million people developed TB and 1.5 million died of the disease in 2013. Although one third of the world’s population is infected with the bacillus Mycobacterium tuberculosis, the causative agent of TB, only about 10% will eventually develop clinical disease [1]. Whether or not an individual ultimately develops active disease depends upon both the host immune response and environmental aspects [2]. Genetic factors play an important role in immune system function and are thought to be the key factor in determining an individual’s susceptibility to TB [2-5].

The SP110 gene on chromosome 2 encodes a leukocyte-specific nuclear body component that can function as an activator of gene transcription and may serve as a nuclear hormone receptor coactivator. SP110 is a promising candidate gene in the regulation of individual susceptibility to M. tuberculosis. First reported by Pan H, et al. [6], SP110 is the closest human homolog of the mouse gene Ipr1 (Intracellular Pathogen Resistance 1), which protects against tuberculosis by encoding Speckled proteins (SP) that regulate cell activation, division and apoptosis [7]. Previous studies associated SP110 polymorphisms and susceptibility to TB in north Indian [8], Vietnamese [9] and Chinese Han [10] populations, although some groups reported negative results [11, 12]. In addition, the PMP22 (peripheral myelin protein 22) gene on chromosome 17, previously reported to be associated with Charcot Marie Tooth (CMT) disease or hereditary neuropathy with pressure palsies (HNPP), may also play an important role in susceptibility to TB [13-15]. However, neither SP110 nor PMP22 has yet been investigated with respect to TB in the Tibetan population.

To investigate the association between SP110 and PMP22 and TB risk in Tibetans, we performed an association analysis in a case-control study. Our findings will help to improve patient-specific TB treatment and diagnosis options in the Tibetan population.

a P values was calculated from Pearson’s chi-square tests.

b P values was calculated by Welch’s t tests.

Table 3: Allele frequencies in cases and controls and odds ratio estimates for TB

Table 5: Association between SP110 and PMP22 tSNPs and TB risk based on different inheritance models 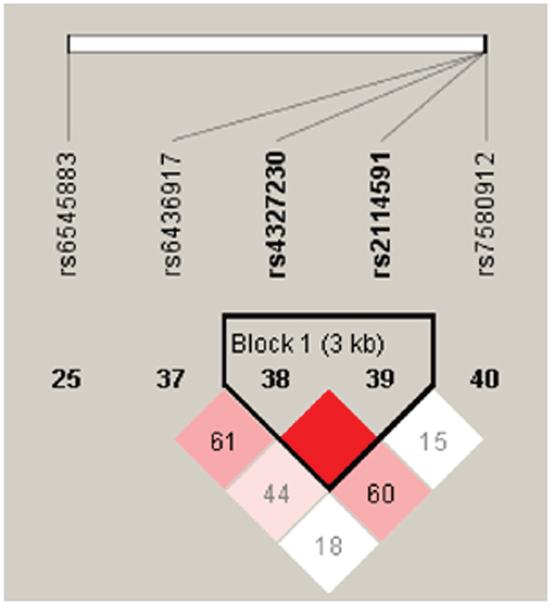 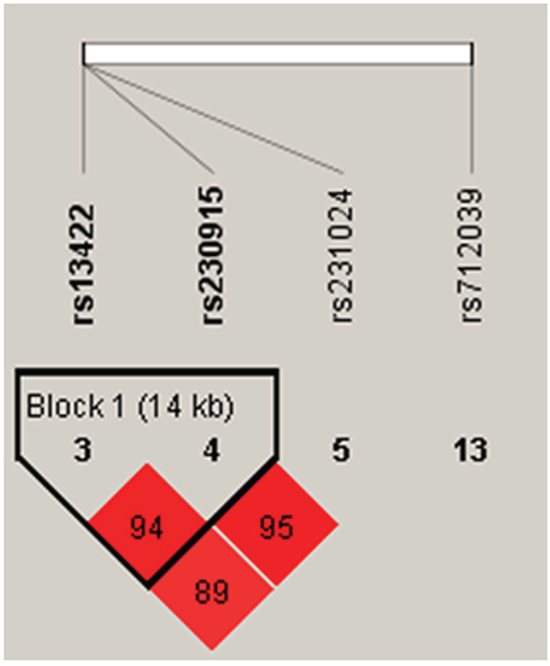 Table 6: Association of haplotype frequencies with TB risk in cases and controls

Multiple groups have investigated associations between SP110 and TB susceptibility in a variety of populations, but these study results are generally considered controversial [8-10, 12, 16-18]. In the current case-control study, we investigated seven total SNPs in a Tibetan population and found that three in SP110 (rs6436917, rs4327230, rs2114591) and one in PMP22 (rs13422) were associated with TB risk. To the best of our knowledge, this is the first study to demonstrate an association between PMP22 and TB, and the first study of SP110 in Tibetans. We found that the “GC” haplotype in SP110 was protective against TB, with a 64% reduction in disease risk. “CA” and “CG” in PMP22 were also associated with a protective effect.

PMP22 encodes an integral membrane protein that is a major component of myelin in the peripheral nervous system. It is expressed in Schwann cells and also in non-neural cells such as the lung epithelium, and influences cell proliferation [19]. In the current study, we identified the rs13422 A allele in the PMP22 3’UTR as a TB risk factor in a Tibetan population. This is the first study to associate PMP22 and TB risk.

TB elicits a kind of type IV allergic reaction (also called delayed type hypersensitivity, DTH). The main pathological processes involved include exudation, alteration and proliferation, which depend on both the host immune system and M. tuberculosis strain virulence. Mouse models have been employed to explore the impacts of Ipr1, encoded within the sst1 locus, on TB susceptibility. Kramnik [7] showed that sst1 gene expression may be regulated by macrophages in a cell-autonomous manner. Chackerian, et al. [20] also found increased numbers of IFN-γ-producing CD4+ T cells in the lungs of sst1-resisitant C57BL/6 inbred mice, and conjectured that TB susceptibility was related to the ability to recruit mycobacteria-specific IFN-γ-producing Th1 cells to the lungs. Mechanisms of TB resistance via Ipr1 and sst1 have been extensively explored, but studies of SP110 with respect to TB in humans are rare, and no work had yet addressed PMP22, which is primarily associated with neural diseases, in TB. Though we found that PMP22 is a risk factor for TB, the mechanisms by which PMP22 affects immunity are unknown and require further study.

The Bonferroni correction is one of the most important methods used to address false discovery rates resulting from multiple testing. We found that SNPs rs4327230 and rs2114591 remained significant after Bonferroni correction, while rs6436917 and rs13422 were not associated with TB. This may due to our strict SNP filtering criteria and small sample size. Additionally, the Bonferroni correction adjusts the value of alpha based on the number of tests performed, and is thus conservative; in some cases, truly significant differences may be deemed non-significant as a result of type II errors [21].

Our study faced some intrinsic limitations. Our patient sample size (217 cases and 383 controls) was not large enough for the association analysis. Other studies included more than 1000 samples [22], and their SNP-TB association findings are therefore more reliable. Additionally, the case groups we selected included patients diagnosed with clinical tuberculosis (sputum smear-positive), regardless of their typing, which could potentially reduce the validity of our conclusions.

Our study provides new evidence supporting the importance of host genetic variability in TB susceptibility. We identified SP110 genotypes that appear protective against TB, and identified PMP22 genotypes as risk factors in TB susceptibility. Our study may help to identify those TB-affected individuals most susceptible to disease, and to improve patient-specific clinical TB diagnosis.

We strictly obeyed the World Medical Association Declaration of Helsinki when using human tissue and signing the study protocol with subjects, which was approved by the Ethical Committee of Xi’an Jiaotong University. Each participant provided written, informed consent.

All participants in our study were Tibetan Chinese. A total of 143 TB patients were consecutively recruited between March 2013 and June 2015 in the Tangdu Hospital, affiliated with The Fourth Military Medical University in Xi’an city, China. Patients were diagnosed with TB using symptoms and signs, chest X-ray, sputum smear test for acid fast bacilli (AFB) and M. tuberculosis sputum culture. All patients were HIV negative, which was confirmed by the HIV serology test. There were no age, sex or TB classification restrictions when enrolling the case group. Controls were healthy people receiving physical examinations in other clinical departments of Tangdu Hospital. Healthy controls did not have respiratory disease, immune system disease or any other infectious disease, such as acquired immunodeficiency syndrome (AIDS), that could have affected our study results. Peripheral blood was collected from both cases and controls for DNA extraction.

A standardized epidemiological questionnaire was provided to all subjects to collect basic demographic information, including sex, age, residence, educational status, history of family cancer, history of smoking, alcohol consumption and TB contact history. Plasma carcinoembryonic antigen and alpha-fetoprotein levels were determined to ensure that no controls suffered any cancer.

We used Microsoft Excel and SPSS 16.0 (SPSS, Chicago, IL) statistical packages to perform statistical analyses. All p-values were two-sided and p<0.05 was considered statistically significant. A t test and Chi-square test were performed to compare sex and age differences between cases and controls. Fisher’s exact test was applied to each SNP in the controls to test for departure from Hardy–Weinberg Equilibrium (HWE). Odds ratios (ORs) and 95% confidence intervals (CIs) for the allele and genotype frequencies were calculated using Pearson Chi-square test adjusted by age and gender. Cochran-Armitage trend test was performed to determine associations between SNPs and TB. Sex and age subgroups were not separated due to sample size limitations.

We would like to thank all the patients and individuals in this study for their participation. We are also very grateful for the assistance of the clinicians and other hospital staff who contributed blood samples and data for this study.

This work was supported by the National 863 High-Technology Research and Development Program (No. 2012AA02A519).

7. Kramnik I. Genetic dissection of host resistance to Mycobacterium tuberculosis: the sst1 locus and the Ipr1 gene. Current topics in microbiology and immunology. 2008; 321:123-148.