Evasion of programmed cell death is one of the hallmarks of cancer [1] and contributes to tumor formation and treatment failure [2]. The efficacy of anticancer therapies critically depends on their ability to engage cancer cell death, highlighting the need to develop new concepts to trigger programmed cell death in cancer cells. The redox state of a cell plays an important role in the control of various cellular processes, including cell death pathways, and maintenance of redox homeostasis is critical for cell survival [3]. As the accumulation of ROS can be detrimental to the cell, several antioxidant defense systems exist for their detoxification, for example GSH, the most abundant non-protein thiol [3]. Accumulation of ROS in the vicinity of lipid membranes can trigger lipid peroxidation, which can lead to cell death via the destruction of membranes [4].

The membrane redox state is governed on the one side by the generation of lipid peroxides and on the other side by membrane-associated enzymatic and non-enzymatic peroxide scavengers. Within the family members of GPX that catalyze the reduction of hydrogen and lipid peroxides, only GPX4 has been described to directly detoxify lipid hydroperoxides within biological membranes [5]. In addition, non-enzymatic peroxide scavengers can neutralize membrane lipidperoxyl radicals, for example Fer-1, described as a small-molecule inhibitor of lipid peroxidation [6], and lipophilic antioxidants such as α-Toc [7]. Disturbance of the membrane redox state can lead to permeabilization of membranes and subsequently to cell death. Several ROS-generating enzymes contain iron or iron derivatives as essential co-factors for their proper function, for example lipoxygenases (LOX), nicotinamide adenine dinucleotide phosphate hydride (NADPH) oxidases (NOX), xanthine oxidase, and cytochrome P450 enzymes [8]. In addition, redox-active labile iron pools can directly catalyze free radical formation via Fenton chemistry [9].

There are different modes of programmed cell death [10]. Among them, ferroptosis is a newly defined form of regulated, oxidative cell death that is characterized by lipid peroxidation, generation of lipid-based ROS and its dependency on iron [11]. As ferroptosis represents a form of non-apoptotic cell death, therapeutic induction of ferroptosis has recently emerged as a new strategy to trigger cancer cell death. Ferroptosis-inducing compounds have been categorized into two classes based on their mode of GPX4 inhibition [12]. One class, including Erastin, indirectly inhibits GPX4 through GSH depletion, as GSH is an essential cofactor of GPXs. The second class, e.g. RSL3, directly inhibits GPX4 without GSH depletion [12]. In the present study, we investigated the question whether prototypic ferroptosis-inducing compounds such as RSL3 and Erastin modulate Smac mimetic-induced cell death in ALL, the most frequent childhood malignancy [13].

To explore whether prototypic ferroptosis-inducing compounds such as RSL3 and Erastin modulate Smac mimetic-induced cell death in ALL cells, we tested the antileukemic activity of the bivalent Smac mimetic BV6 that antagonizes cellular Inhibitor of Apoptosis (cIAP) and x-linked Inhibitor of Apoptosis (XIAP) proteins [14] together with RSL3 and Erastin that were recently described as two prototypic ferroptosis-inducing compounds [12]. RSL3 has been identified as an inhibitor of GPX4 [12], the only GPX family member that can directly reduce lipid hydroperoxides within biological membranes [5]. Erastin blocks the cystine/glutamate antiporter at the plasma membrane that provides cystine for the synthesis of the antioxidant tripeptide GSH, which results in the depletion of cellular GSH levels [15]. Of note, BV6 cooperated with RSL3 to significantly increase cell death compared to treatment with either agent alone in two ALL cell lines (Figure 1A). Similarly, BV6 acted in concert with Erastin to trigger cell death in ALL cells (Figure 1A).

To explore the underlying mechanisms of the observed cooperative induction of cell death by the cotreatment with BV6 and RSL3 or Erastin, we determined cellular GSH levels. Erastin alone and in combination with BV6 caused a significant reduction of GSH levels, consistent with the described mode of action of Erastin as an inhibitor of the cystine/glutamate antiporter. In contrast, GSH levels remained largely unaffected upon treatment with BV6 [16] or RSL3 (Figure 1B), in line with the reported function of RSL3 as GPX4 inhibitor that triggers ferroptosis without changes in GSH levels [12].

Since inhibition of GPX4 or depletion of cellular GSH levels facilitate the accumulation of ROS [3], we hypothesized that RSL3 or Erastin act together with BV6 to cause alterations in ROS levels. To clarify this hypothesis, we analyzed cellular ROS levels in ALL cells before they succumb to cell death using the fluorescent ROS-sensitive dye CellROX. Importantly, both RSL3 and Erastin cooperated with BV6 to significantly increase ROS levels compared to either treatment alone (Figure 1C).

Collectively, these findings demonstrate that BV6 cooperates with RSL3 or Erastin to induce cell death, which is accompanied by accumulation of ROS and lipid peroxidation.

To explore the involvement of ferroptotic cell death, which is characterized by its dependency on iron, we tested the effect of the iron chelator DFO. Importantly, DFO significantly reduced RSL3/BV6-stimulated cell death, whereas it was unable to block Erastin/BV6-induced cell death even at higher DFO concentrations (Figure 3, Supplementary Figure S1A). Treatment with a high concentration of RSL3 was used as a positive control for ferroptosis (Supplementary Figure S1B). This indicates that RSL3/BV6 but not Erastin/BV6 cotreatment triggers ferroptotic cell death. To confirm that the effects brought about by Erastin are due to cystine deprivation leading to GSH depletion, we analyzed the effects of the thiol-containing compound N-acetylcysteine (NAC). The presence of NAC, which almost completely suppressed ROS production, significantly decreased BV6/Erastin-induced cell death (Supplementary Figure S2). 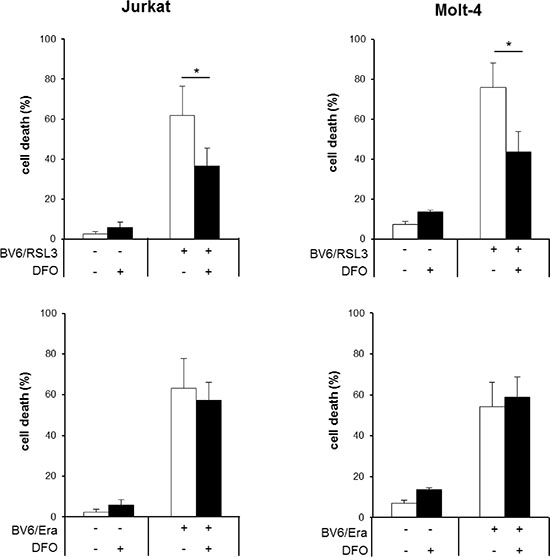 Necroptosis represents another mode of programmed cell death that can be engaged in particular upon caspase inhibition [18]. To test whether Erastin/BV6 cotreatment triggers necroptosis when caspase activation is inhibited by zVAD.fmk we used pharmacological and genetic approaches to block key components of necroptosis signaling. Notably, the addition of the RIP1 kinase inhibitor necrostatin-1 (Nec-1) failed to prevent Erastin/BV6/zVAD.fmk-induced cell death (Figure 4A), whereas Nec-1 significantly reduced cell death upon treatment with tumor necrosis factor (TNF)α/BV6/zVAD.fmk that was used as a positive control for necroptotic cell death (Supplementary Figure S3A). Similarly, knockdown of RIP3 did not alter Erastin/BV6-driven cell death in the presence or absence of zVAD.fmk (Figure 4B), whereas TNFα/BV6/zVAD.fmk-stimulated cell death was significantly decreased in RIP3 knockdown cells (Supplementary Figure S3B). This set of experiments shows that RIP1 kinase activity and RIP3 are dispensable for Erastin/BV6-mediated cell death, suggesting that Erastin/BV6 cotreatment does not induce necroptosis when caspase activation is inhibited. 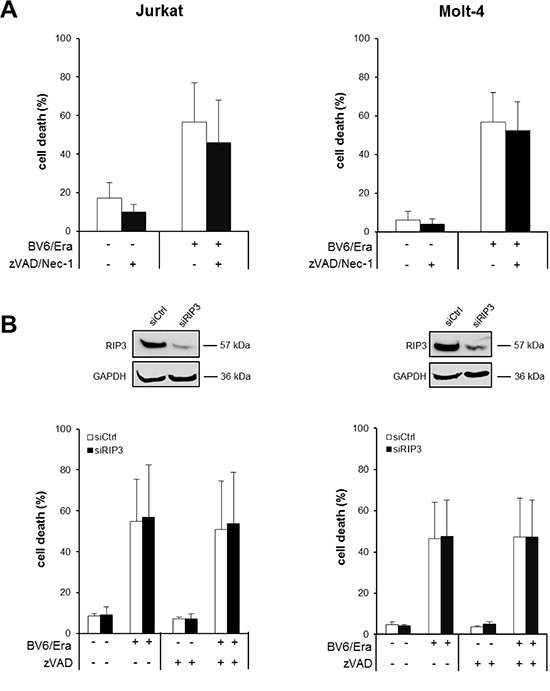 To investigate the contribution of ROS to cell death we used α-Toc, a lipophilic ROS scavenger. The addition of α-Toc significantly reduced lipid peroxidation upon cotreatment with RSL3/BV6 or Erastin/BV6 in several ALL cell lines (Figure 5A, Supplementary Figure S4A). Importantly, α-Toc significantly rescued both Erastin/BV6- and RSL3/BV6-stimulated cell death in several ALL cell lines (Figure 5B, Supplementary Figure S4B). This indicates that inhibition of ROS accumulation protects cells from RSL3/BV6- or Erastin/BV6-induced lipid peroxidation and cell death. 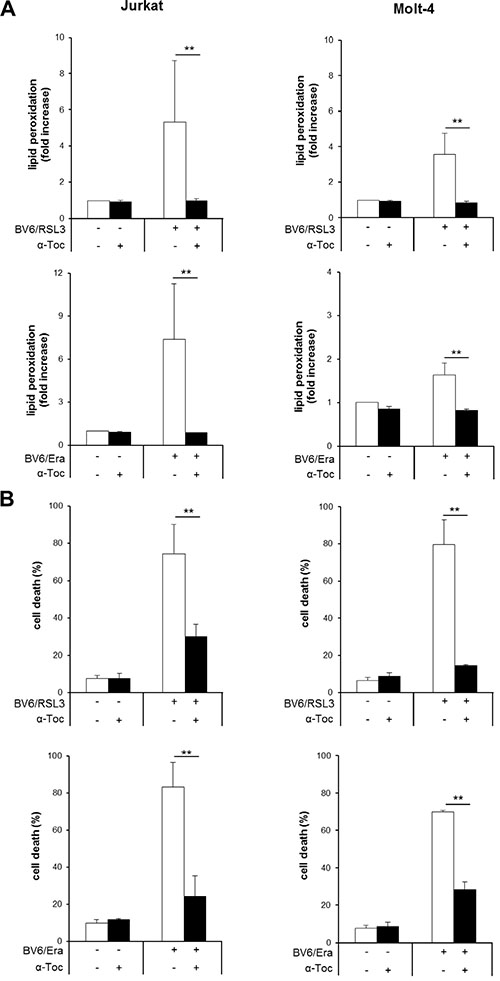 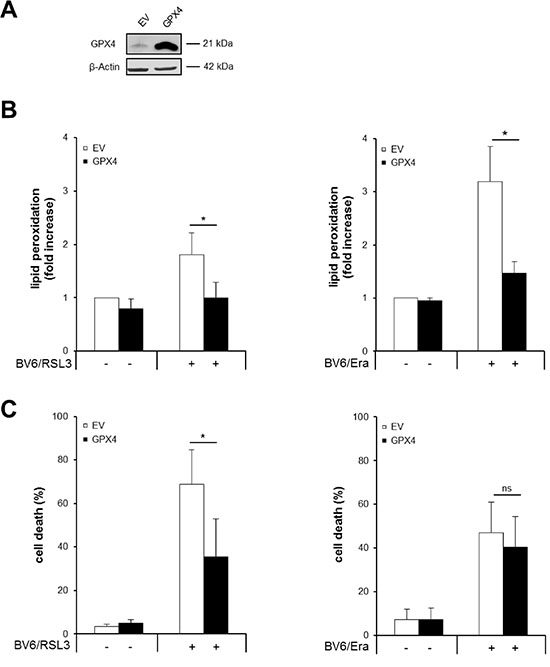 Figure 6: GPX4 overexpression inhibits RSL3/BV6- but not Erastin/BV6-induced cell death, while it prevents both RSL3/BV6- and Erastin/BV6-induced lipid peroxidation. Molt-4 cells were stably transduced with empty vector (EV) or a vector containing GPX4. (A) Protein expression of GPX4 was analyzed by Western blotting. (B and C) Cells were treated with 4 μM BV6, 0.075 μM RSL3 and/or 7.5 μM Erastin (Era). Lipid peroxidation was assessed after 18 hours (Erastin/BV6) or 24 hours (RSL3/BV6) by flow cytometry in PI-negative cells using the fluorescent dye BODIPY-C11 and is shown as fold increase (B). Cell death was determined after 24 hours by FSC/SSC analysis and flow cytometry (C). Mean and SD of at least three experiments performed in triplicate are shown; *P < 0.05, ns, not significant. 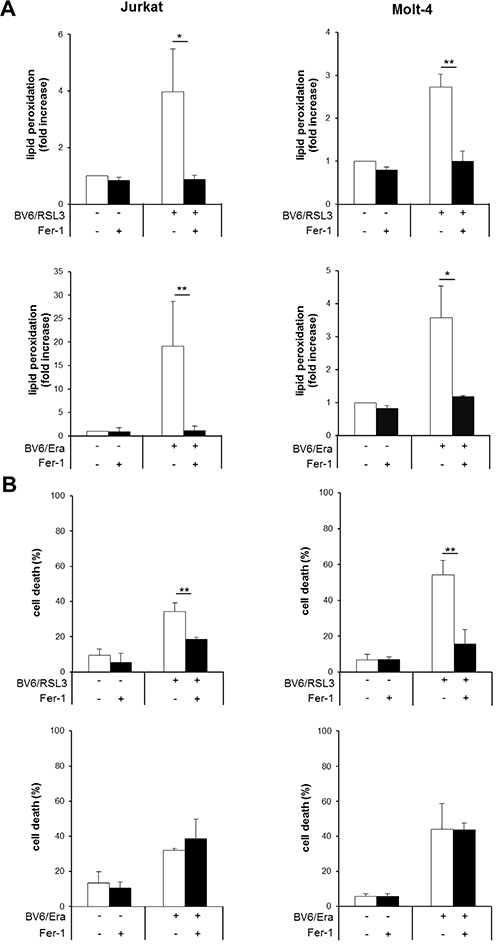 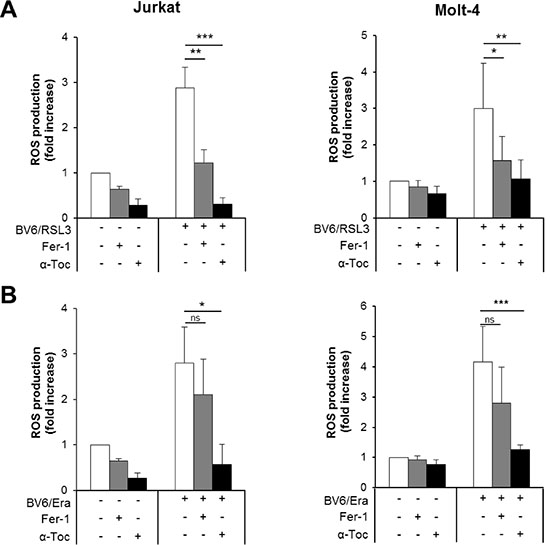 While both RSL3 and Erastin have been classified as prototypic ferroptosis-inducing compounds when used as single agents at cytotoxic concentrations that trigger cell death [12], in the present study we show that RSL3 but not Erastin induces ferroptosis when used at subcytotoxic doses in combination with the Smac mimetic BV6. This points to the existence of differences in the signaling pathways that are engaged upon cotreatment with RSL3/BV6 versus Erastin/BV6, which could be explained by the different modes of action of RSL3 and Erastin. RSL3 has been characterized as a small-molecule GPX4 inhibitor [12]. According to the current model, inhibition of GPX4 leads to the accumulation of lipid peroxides which, via an iron-catalyzed reaction, generate toxic lipid radicals that are lethal to the cell [19]. Erastin depletes GSH by inhibiting the cystine/glutamate antiporter that provides cystine for GSH synthesis [15]. GSH depletion not only indirectly impairs GPX4 function that requires GSH as an essential cofactor [5], but also reduces the antioxidant capacity of the cell, since GSH, being the most abundant non-protein thiol, is one of the key antioxidant defense systems of the cell [3], thereby favoring ROS accumulation. Accumulation of ROS can be detrimental to the cell via various mechanisms. In addition, Erastin has been reported to inhibit voltage-dependent anion-selective channel protein (VDAC)2/3, a component of the mitochondrial permeability transition pore [20]. Thus, while both RSL3 and Erastin act in concert with the Smac mimetic BV6 to stimulate ROS-dependent cell death in ALL cells, there are differences in the underlying molecular mechanisms and the resulting type of cell death.

Since inhibition of caspases has been reported to favor a switch from apoptotic to necroptotic cell death, we tested the hypothesis according to which Erastin/BV6 cotreatment induces necroptosis when caspase activation is inhibited by zVAD.fmk. However, our findings showing that the RIP1 inhibitor Nec-1 or RNAi-mediated silencing of RIP3 fail to protect from Erastin/BV6-mediated cell death do not support this hypothesis, as RIP1 and RIP3 are considered to be key elements of the necroptotic pathway [18].

We previously reported that pharmacological blockage of antioxidant pathways responsible for the detoxification of ROS, using buthionine sulfoximine (BSO), a specific inhibitor of the rate-limiting enzyme in GSH synthesis γ-glutamylcysteine ligase [21], Auranofin, an inhibitor of thioredoxin reductase, a key enzyme in the antioxidant thioredoxin pathway [3], or Erastin can prime ALL cells for Smac mimetic-induced cell death [16, 22]. These findings underscore the relevance of redox signaling in the regulation of Smac mimetic-mediated cell death.

This work has been partially supported by grants from the Deutsche Forschungsgemeinschaft (SFB815), European Community, IUAP VII, Wilhelm Sander-Stiftung and BMBF (to S.F.).