Breast cancer is one of the common diagnosed malignancies and the main cause of cancer mortality among females worldwide [1]. In the United States, approximately 246,660 new breast cancer cases were occurred in female in 2016, and 40,450 Americans will die from this disease [2]. Some signaling pathways have been identified to play an oncogenic role in the development and progression of breast cancer. For example, Akt, mTOR (mammalian target of rapamycin), MAPK (mitogen-activated protein kinases), NF-κB (nuclear factor-κB), Notch, SHH (sonic hedgehog) pathways have been validated to be positively associated with breast tumorigenesis [3–6]. Recently, Skp2 (S-phase kinase associated protein 2), which belongs to the ubiquitin proteasome system (UPS), is the substrate-recruiting component of the SCF (Skp1-Cullin1-F-box complex) type of E3 ubiquitin ligase complex [7]. Skp2 functions as an oncoprotein in a variety of human cancers [8, 9]. Skp2 exerts its oncogenic function through targeting its substrates [10]. Skp2 has been revealed to critically enhance the pathogenesis of breast cancer [3]. Due to its oncogenic role in tumorigenesis, inhibition of Skp2 could be a promising therapeutic strategy for combating breast cancer. 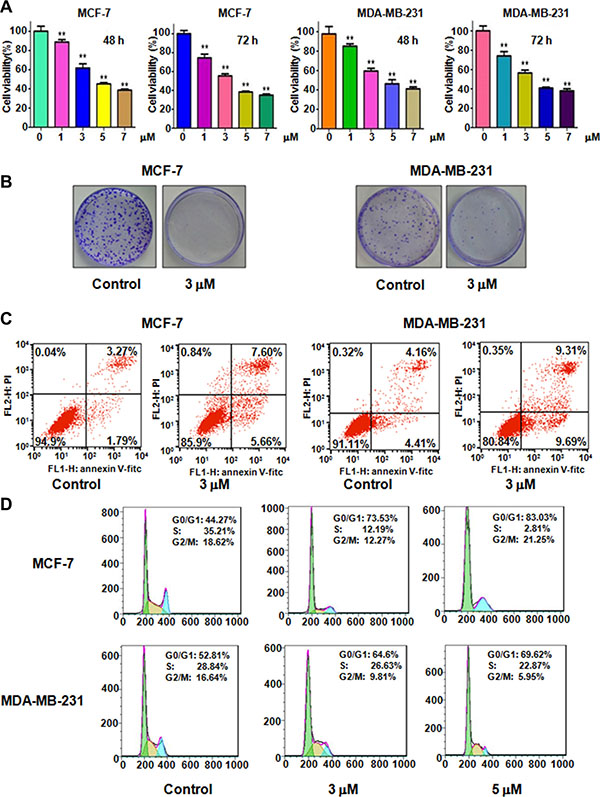 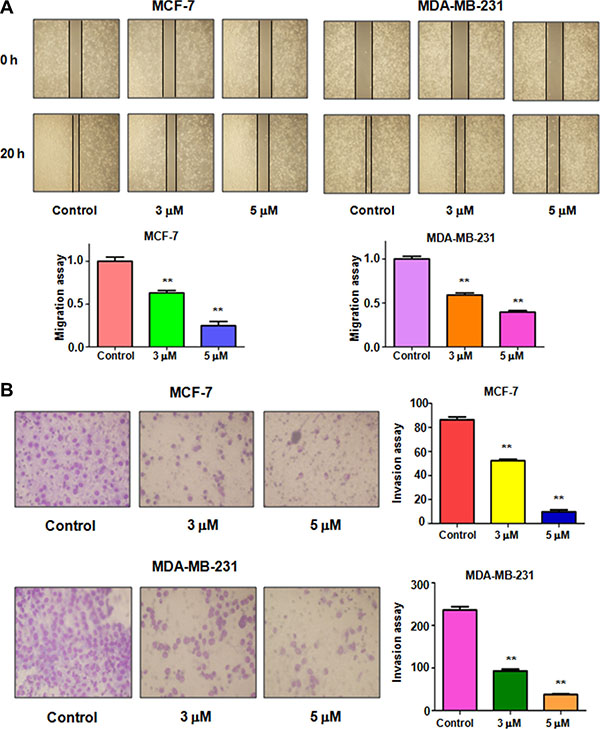 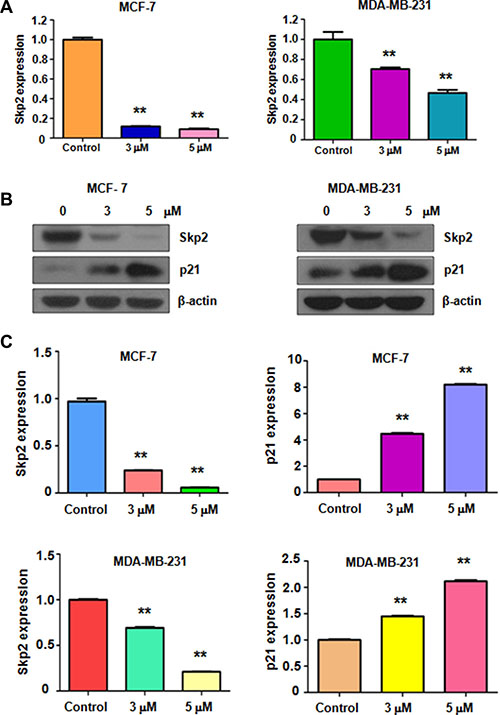 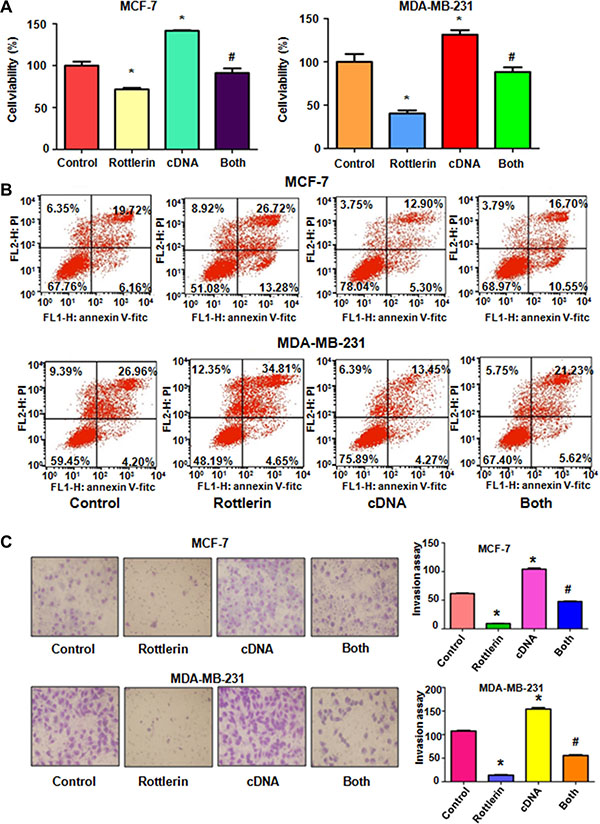 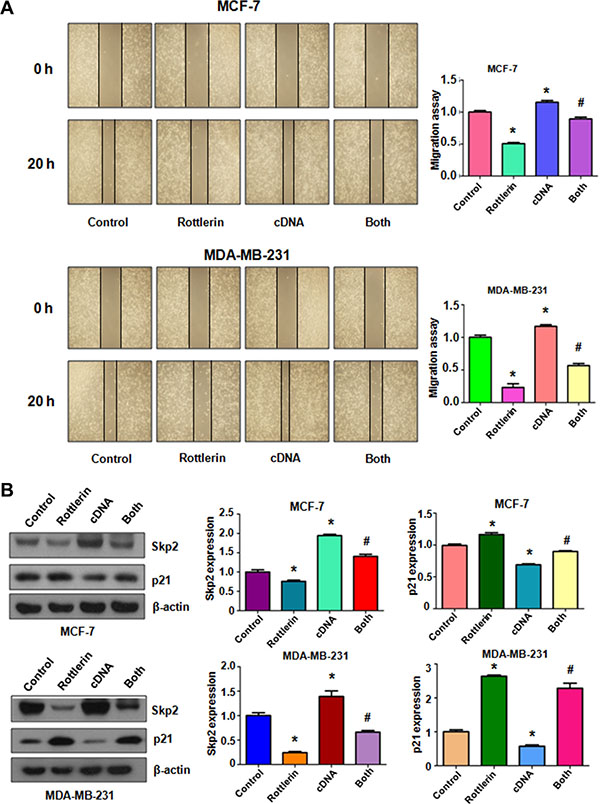 To further determine the oncogenic role of Skp2 in rottlerin-triggered anti-tumor function, Skp2 was depleted by its siRNA transfection in breast cancer cells treated with rottlerin. We observed that depletion of Skp2 suppressed cell growth in MCF-7 and MDA-MB-231 cells (Figure 6A). Cells with Skp2 siRNA transfection were more sensitive to rottlerin-mediated cell growth inhibition (Figure 6A). Consistently, depletion of Skp2 led to more apoptotic cells induced by rottlerin compared with rottlerin alone or Skp2 transfection alone (Figure 6B). Moreover, the results from wound healing assay showed that down-regulation of Skp2 inhibited cell migration (Figure 6C) and invasion (Figure 7A, 7B). Rottlerin treatment in combination with Skp2 depletion caused inhibition of cell migration and invasion to a greater degree (Figures 6C and 7A, 7B). Our results indicated that rottlerin could inhibit Skp2 expression, leading to its anti-tumor function in breast cancer cells. Notably, we found that Skp2 siRNA plus rottlerin inhibited Skp2 expression to more degree compared to rottlerin alone or siRNA transfection alone (Figure 7C). 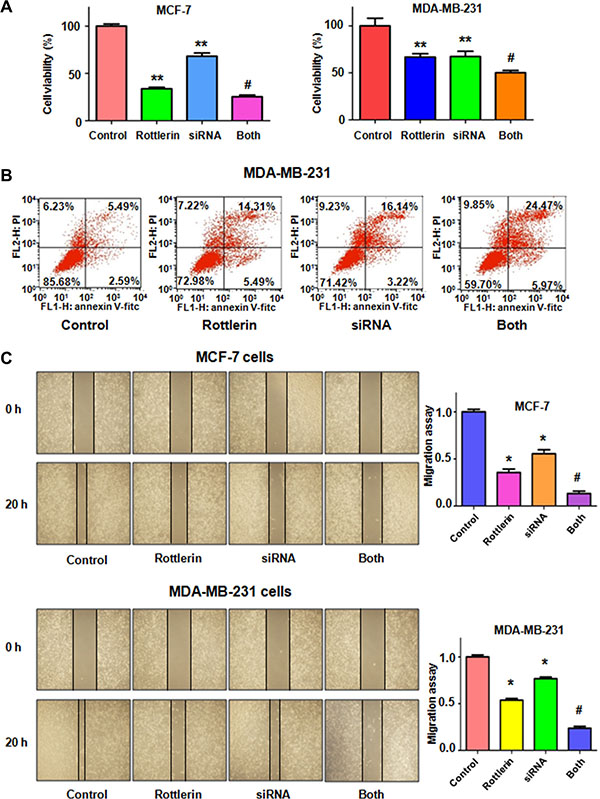 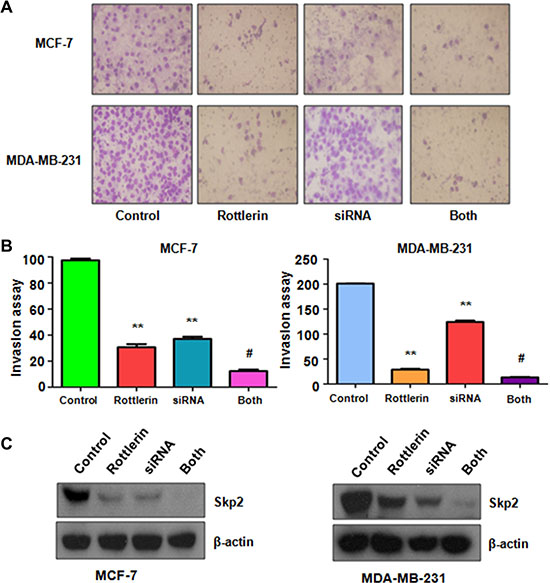 Due to the oncogenic function of Skp2 in tumorigenesis, inactivation of Skp2 could be helpful for treating human cancers. To this end, multiple groups have discovered several Skp2 inhibitors. For example, Compound A has been found to block Skp2 E3 ligase activity [38]. Another Skp2 inhibitor, namely Compound 25, also named as SZL-P1-41, was reported to inhibit Akt-mediated glycolysis and induced cellular senescence [39]. Since these chemical inhibitors exhibit side effects, it is important to discover natural agents with non-toxic nature to inactivate Skp2 in human cancer. In fact, several natural compounds have been reported including curcumin [40], butylidenephthalide [41], Flavokawain A (FKA) [42], and Salinomycin [43]. In the present study, we explored whether a nature agent rottlerin could be a potential inhibitor of Skp2 in breast cancer. We discovered that rottlerin inhibited Skp2 expression in breast cancer cells. More importantly, we confirmed that rottlerin exerts its anti-tumor function via inactivation of Skp2. Taken together, inhibition of Skp2 by rottlerin could be a promising approach for breast cancer treatment. However, more investigations are necessary to determine the functions of rottlerin in animal model and clinical trial in the future.

Human MCF-7 and MDA-MB-231 cells were cultured in DMEM medium supplemented with 10% fetal bovine serum and 1% penicillin/streptomycin in a 5% CO2 atmosphere at 37°C. Primary antibody for Skp2 (SC-7164) was purchased from Santa Cruz Biotechnology (Santa Cruz, CA). Anti-p21 antibody was brought from Cell Signaling Technology. All secondary antibodies were purchased from Thermo Scientific. Lipofectamine 2000 was purchased from Invitrogen. Monoclonal anti-β-actin antibody and rottlerin (CAS number 82-08-6, 85% rottlerin) were obtained from Sigma-Aldrich (St. Louis, MO). Rottlerin was dissolved in DMSO to make a 10 mM stock solution and was added directly to the medium at different concentrations. CellTiter-Glo(®) luminescent cell viability assay was purchased from Promega (Madison, WI), and Transwell inserts and Matrigel were obtained from BD Biosciences. Cells were treated with 0.1% DMSO as the control group.

Cells were seeded at 5 × 103 cells/well in 96-well plates for 24 h and then treated with different concentrations of rottlerin. After 48 h and 72 h treatment, cell viability was assessed using the CellTiter-Glo® luminescence (CTG) assay. Each value was normalized to cells treated with DMSO.

MCF-7 and MDA-MB-231 cells were cultured in a 6-well plate at 1 × 103 cells/well treated with different concentrations of rottlerin. Cells were grown for 15 days. Colonies were fixed by 4% paraformaldehyde and stained with crystal violet to enable enumeration of colonies.

Cells (2 × 105 cells/well) were cultured in a six-well plate overnight and treated with various concentrations of rottlerin for 48 h. Then, cells were harvested and washed with PBS, resuspended in 500 μl binding buffer with 5 μl Propidium iodide (PI) and 5 μl FITC-conjugated anti-Annexin V antibody. Apoptosis was analyzed by a FACScalibur flow cytometer (BD, USA).

Exponentially growing cells (2.5 × 105 cells/well) were seeded in a 6-well plate overnight and then treated with 3 μM and 5 μM rottlerin for 48 h. After 48 h, cells were collected and washed with cold PBS. Then, suspended cells with 70% cold alcohol were kept at 4°C overnight. Prior to analysis, the cells were washed with cold PBS, and re-suspended at 1 × 106 cells/ml in PBS. Cells were incubated with 0.1 mg/ml RNase I and 50 mg/ml Propidium iodide (PI) for 30 min. Cell cycle was analyzed with a FACScalibur flow cytometer (BD, USA).

MCF-7 and MDA-MB-231 cells were cultured in 6-well plates. After cells converged almost 100%, absorbed the supernatant and scratched the cells with a yellow pipette tip. Then washed the cells with PBS and added medium with rottlerin. The scratched area was photographed with a microscope at 0 h and 20 h, respectively.

Cell invasion assay was conducted to test the invasive activity of MCF-7 and MDA-MB-231 cells treated with rottlerin or Skp2 transfection or combination. Briefly, transfected cells were seeded in the upper chamber with 200 μl serum-free medium and there is 500 μl complete medium in the under chamber with the same concentration of rottlerin. After incubation for 20 h, the membrane of the chamber was strained with Giemsa and photographed with a microscope [40].

Cells were seeded into 6-well plates and transfected with Skp2 cDNA or Skp2 siRNA or empty vector using lipofectamine 2000 following the instruction’s protocol [40]. Skp2 siRNA: sense 5′-GGAGUGACAAAGACUUUG UTT-3′; antisense 5′-ACAAAGUCUUUGUCACUC CTT-3′. After the transfection, the cells were subjected to further analysis as described under the results sections.

The harvested cells were washed by PBS and lysed with protein lysis buffer. The concentrations of the proteins were tested by BCA Protein Assay kit (Thermo Scientific, MA). Same amount of protein samples were separated by electrophoresis in Sodium Dodecyl Sulfonate (SDS)-polyacrylamide gel and then transferred onto a Polyvinylidene Fluoride (PVDF) membrane, and then incubated with primary antibody at 4°C overnight. After washed with TBST for three times and incubated with second antibody at room temperature for one hour. Then the expression of protein was detected by electrochemiluminescence (ECL) assay [44].