The prognosis of esophageal cancer patient is still poor [1]. Immune checkpoint proteins (or checkpoints) are many inhibitory immune signalings that are vital for maintaining self-tolerance and dictating the duration or the amplitude of immune responses in peripheral tissues [2]. They are extremely important to minimize collateral tissue damages [2]. Existing evidences have shown that blockade of immune checkpoints could potently activate therapeutic anti-cancer immunity, which has become a promising anti-cancer (i.e. esophageal cancer) strategy [2].

In the current study, we showed that, as compared to normal donors, the expressions of several co-inhibitory receptors (or checkpoints), including PD-1, T cell immunoglobulin mucin-3 (TIM-3), T cell Ig and ITIM domain (TIGIT) and CD160, were significantly increased in a fraction of peripheral T cells of esophageal cancer patients. Meanwhile, the expression levels of PD-1, TIM-3 and TIGIT were significantly higher in tumor-infiltrating lymphocytes (TILs) than that in peripheral T cells in the cancer patients. 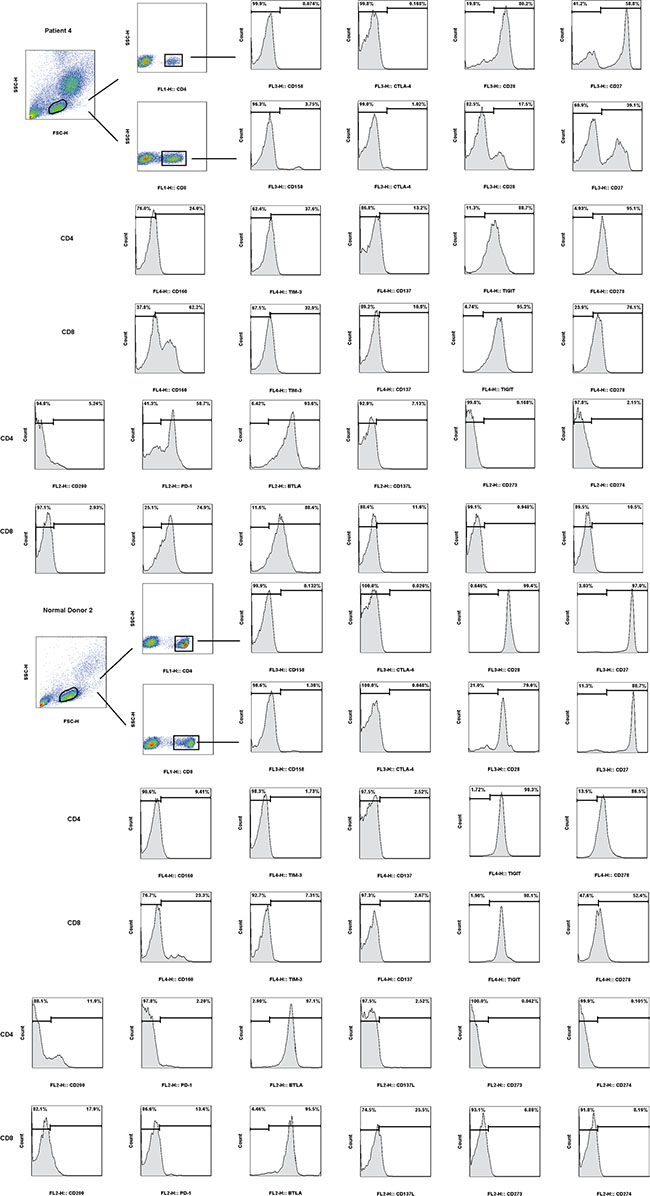 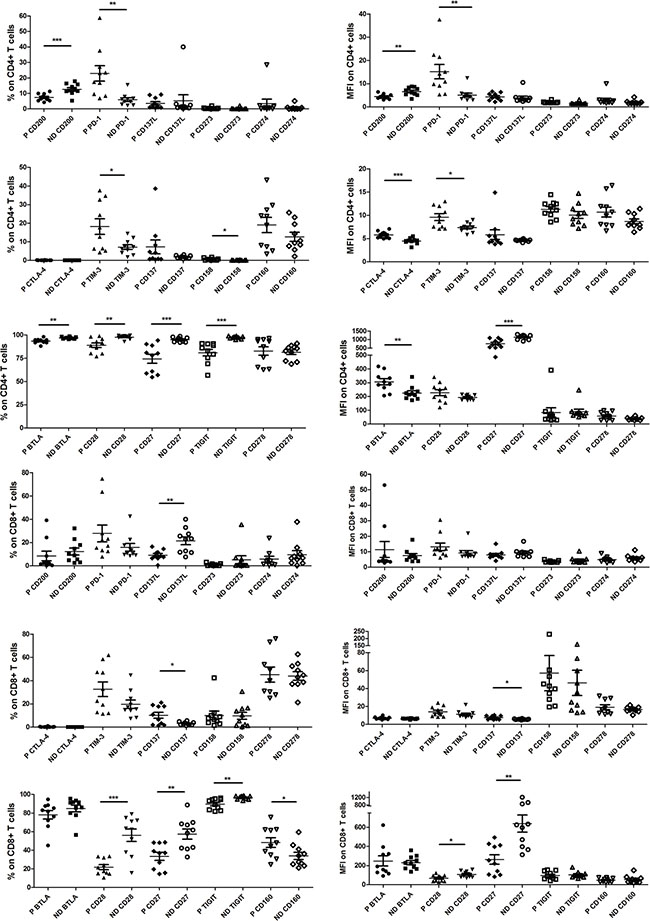 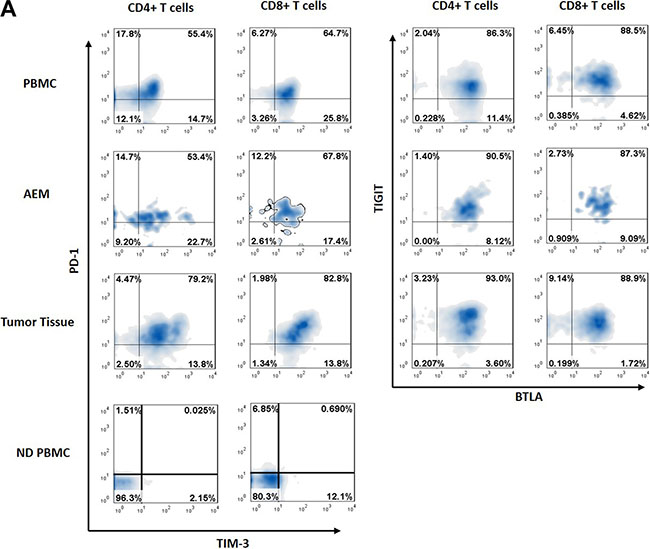 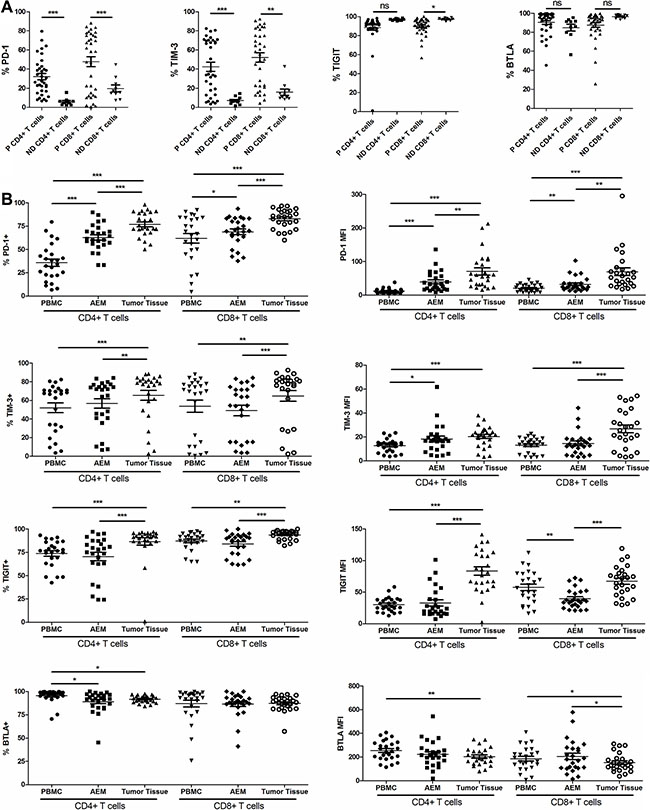 Correlation between PD-1 and TIM-3/TIGIT expression 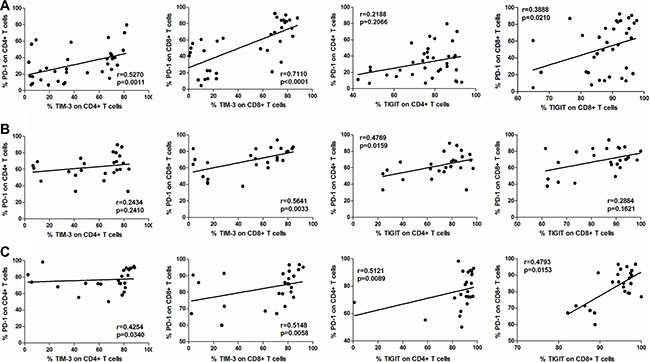 In recent clinical cancer studies, the concurrent blockage of PD-1 and TIM-3 pathways exhibited better anti-cancer efficiency [9, 10]. Studies have shown that TIGIT is over-expressed on human and murine TILs. Dual blockade of TIGIT and PD-1 pathway additively increased proliferation, cytokine production, and de-granulation of tumor antigen-specific CD8+ T cells and CD8+ TILs [11, 12]. Our observations exhibited that the expression of PD-1 on circulating CD4+ T cells was positively correlated with histological grade of patients, and negatively correlated with tumor size and lymph node status of patients (Table 1). Moreover, the expressions of PD-1 and TIM-3 on CD4+ TILs were significantly associated with TNM stage of patients (Table 1). Studies have indicated that how PD-1 expression could affect T cell functions [13]. Recent data has suggested that TIM-3 positive CD4+ T cells could represent as functional regulatory T cells in human tumors [14]. However, due to the limitation of this small sample study, further studies will be needed to evaluate potential capacity of PD-1 and TIM-3 as prognostic factors, and to dissect the mechanism of PD-1 and TIM-3 pathways in esophageal cancer.

Table 1: Clinicopathological characteristics of esophageal cancers in relation to PD-1 and TIM-3 expression

In conclusion, our observations suggest that the co-inhibitory receptors PD-1, TIM-3 and TIGIT could be the immunotherapeutic targets in esophageal cancer.

Isolation of PBMC and TILs

A four mL peripheral blood sample was drawn from each health donor or esophageal cancer patient before surgery. The blood samples were centrifuged through a Ficoll-Paque Plus (GE, Shanghai, China) gradient. TILs were isolated by dissociating tumor tissue with the plunger portion of syringes on mesh sieves before centrifugation on a Ficoll-Paque Plus (GE) gradient. All investigations were conducted according to approval by the ethics committee and the principles expressed in the Declaration of Helsinki.

Data were collected and were utilized to calculate the mean ± standard error (SEM). Statistical differences were analyzed by one-way ANOVA followed by multiple comparisons performed with post hoc Bonferroni test (GraphPad Prism software). A multivariable analysis was performed using a logistic regression model in order to explore the association between expression of different checkpoint proteins, or the association between checkpoint protein expression and patients’ pathological features [15]. A step-down procedure method was selected. The criterion for variable removal was the likelihood ratio statistic based on the maximum partial likelihood estimates. Values of p < 0.05 were considered statistically significant.

This work was supported by the National Natural Science Foundation (81572345, to H. Zhu).