The objective of this study was to determine whether a reduction in energy intake ameliorated the high-fat diet-enhanced spontaneous metastasis of Lewis lung carcinoma in mice. Male C57BL/6 mice were fed the AIN93G diet, a high-fat diet or a high-fat diet with a 5% restriction of the intake. Energy restriction reduced body adiposity and body weight, but maintained growth similar to mice fed the AIN93G diet. The high-fat diet significantly increased the number and size (cross-sectional area and volume) of metastases formed in lungs. Restricted feeding reduced the number of metastases by 23%, metastatic cross-sectional area by 32% and volume by 45% compared to the high-fat diet. The high-fat diet elevated plasma concentrations of proinflammatory cytokines (monocyte chemotactic protein-1, plasminogen activator inhibitor-1, leptin), angiogenic factors (vascular endothelial growth factor, tissue inhibitor of metalloproteinase-1) and insulin. Restricted feeding significantly reduced the high-fat diet-induced elevations in plasma concentrations of proinflammatory cytokines, angiogenic factors and insulin. These results demonstrated that a reduction in diet intake by 5% reduced high-fat diet-enhanced metastasis, which may be associated with the mitigation of adiposity and down-regulation of cancer-promoting proinflammatory cytokines and angiogenic factors.

Overweight and obesity affect cancer survival and are associated with increased mortality caused by cancer in the U.S. [1]. Recurrent and metastatic cancer remains the most devastating aspect of cancer. Obesity at the time of cancer diagnosis can be predictive of increased risk of early recurrence and metastasis [2–5]. Animal studies support the clinical observation that consumption of an obesogenic, high-fat diet increases primary tumorigenesis [6–8] and metastasis [6, 9].

We reported that feeding mice a high-fat diet enhances spontaneous metastasis of Lewis lung carcinoma (LLC) in lungs [17, 18]. We hypothesized that reduction in energy intake reduces high-fat diet-enhanced metastasis. The present study tested the hypothesis by using the LLC spontaneous metastasis model in which mice were fed a high-fat diet with a 5% reduction in intake. The rationale of choosing a 5% restriction was to maintain growth similar to mice fed the AIN93G control diet and to avoid possible growth retardation, which possibly could attenuate the host defense against malignant aggression. 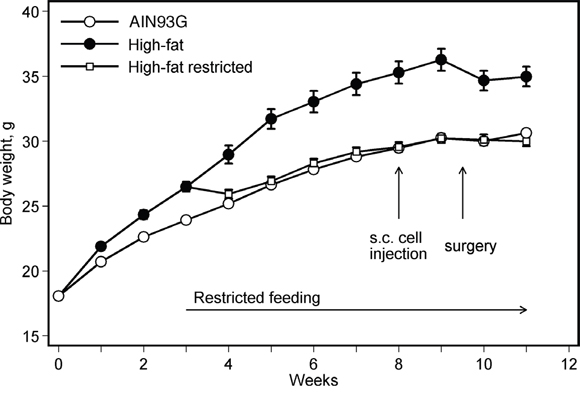 Figure 1: Restricted feeding reduces body weight in mice fed a high-fat diet. Values are means ± SEM (n = 35-38 per group). Mice fed the high-fat diet were heavier than those fed the AIN93G diet; the difference was significant two weeks after the initiation of experimental feeding (p < 0.05). Restricting diet intake by 5% reduced body weight of mice fed the high-fat diet; the difference was significant one week after the initiation of restricted feeding (p < 0.05). 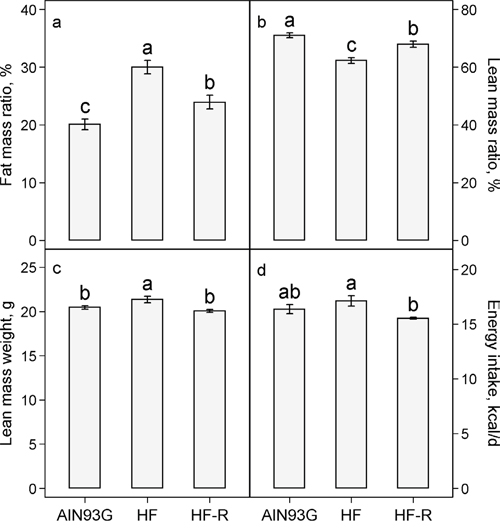 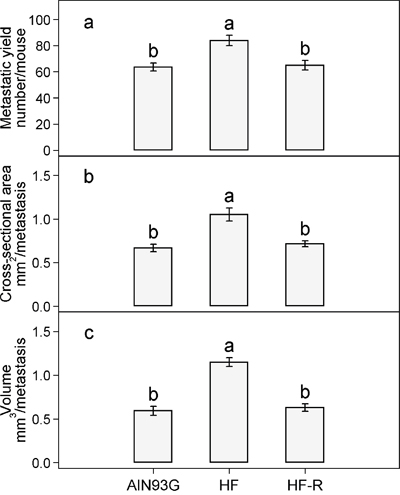 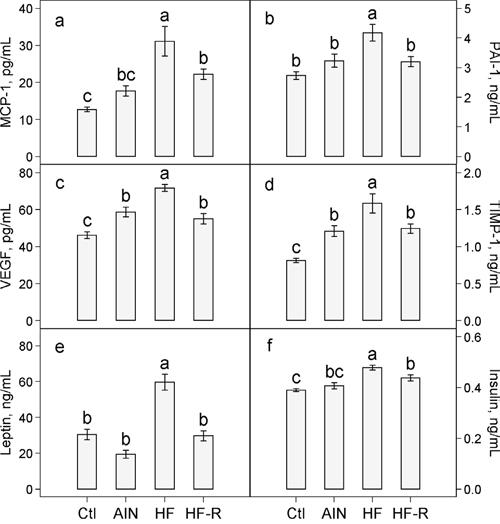 Consistent with our previous reports [9, 17], the present study showed that feeding mice an obesogenic, high-fat diet enhances spontaneous metastasis of LLC in the lungs. A 5% reduction in intake of this diet reduced the number and size of metastases formed in the lungs, indicating that restricted feeding reduces high-fat diet-enhanced metastasis.

Energy restriction, ranging from 20% to 40%, has been used to induce weight loss in rodent models in cancer prevention research [15, 26–28]. Previously, we found that a 30% restriction of high-fat diet intake halted growth and a 20% restriction significantly retarded growth of C57BL/6 mice, while a 7% restriction resulted in a slightly lower but similar growth to mice fed the AIN93G diet (unpublished data). Thus, we chose to restrict the intake by 5% because food intake should not be reduced to the point where minimum energy needs for physiological growth and maintenance of animals cannot be met. Energy restriction is defined as a reduction in energy intake without malnutrition [29]. Growth retardation due to malnutrition because of energy deprivation should be distinguished from weight and adiposity loss due to energy restriction. This is particularly important in cancer prevention research. Malignant growth competes against the host for nutrients to support its rapid progression. Caution should be taken to avoid energy deprivation or insufficiency in models of weight loss and maintenance, which may bias the results and their interpretation.

In summary, results from this study showed that restricting the high-fat diet intake by 5%, which reduced body adiposity and body weight but maintained normal growth of mice, reduced high-fat diet-enhanced spontaneous metastasis. Inhibition of metastasis by restricted feeding is likely through mechanisms of rebalancing metabolic homeostasis by reducing adipogenesis and downregulating its associated production of cancer-promoting proinflammatory cytokines and angiogenic factors. Furthermore, it suggests that dietary energy restriction, by reducing body adiposity and maintaining a healthy body weight, may reduce the severity of occurrence and metastasis in overweight or obese cancer patients after treatment of primary cancer, and thus improve prognosis and quality of life.

Three-week-old male C57BL/6 mice (Harlan, Madison, WI) were maintained in a pathogen-free room with a 12:12-hour light/dark cycle and a temperature of 22 ± 1°C. Three diets were used in this study, the AIN93G diet [30] containing 16% or 45% (high-fat diet) of energy from corn oil, or the high-fat diet for the 5% restricted feeding in that the nutrient density was adjusted to be equivalent to that of the high-fat diet for the unrestricted feeding (Table 1). All diets were powder diets; they were stored at -20°C until feeding. Gross energy of each diet (Table 1) was analyzed by using oxygen bomb calorimetry (Model 6200, Oxygen Bomb Calorimeter, Parr Instrument, Moline, IL).

a Values are means ± SEM of five samples analyzed from each diet.

Lewis lung carcinoma (LLC) cell line, a variant that metastasizes to lungs [31], was obtained from Dr. Pnina Brodt, McGill University, Montreal, Quebec, Canada. The cells were cultured with RPMI-1640 medium containing 10% heat-inactivated fetal bovine serum and maintained in a humidified atmosphere of 5% CO2 in air at 37°C. Cells used for animal studies were in vivo-selected once [9]. The cells were monitored for phenotype by microscopic examination of cell morphology, proliferation properties by growth curve analysis and metastatic capability by injecting cells subcutaneously into mice and examining metastatic formation in lungs. Cells were free of mycoplasma based on Hoechst DNA staining and direct culture tests (performed by American Type Cell Collection, Manassas, VA). These assessments showed that cell identity and metastatic behavior were similar to those of original stocks from the institution providing the cell line.

This study was approved by the Institutional Animal Care and Use Committee of the U.S. Department of Agriculture, Agricultural Research Service, Grand Forks Human Nutrition Research Center. The procedures followed the National Institutes of Health guidelines for the care and use of laboratory animals [32].

After acclimation with the AIN93G diet for one week, mice were randomly assigned into two groups and fed the AIN93G (n = 36) and the high-fat diet (n = 73), respectively. Food intake measurements (n = 6 per group) were initiated two weeks later when significant differences in body weight occurred between the two groups. At week three, mice fed the high-fat diet were divided into two groups; one remained on unrestricted access to the diet (n = 38), and the other was fed 95% of the amount that the unrestricted group consumed in the previous day (n = 35). To avoid food loss by spilling, diet was provided to the restricted group twice daily, one half at 8:00 a.m. and the other half at 4:00 p.m. Body composition was assessed in conscious, immobilized mice one week before cancer cell injection by using quantitative magnetic resonance imaging (Echo whole-body composition analyzer, Model 100, Echo Medical System, Houston, TX). Five weeks after the initiation of the restricted feeding, mice were subcutaneously injected with 2.5 × 105 viable LLC cells per mouse into the lower dorsal region. The resulting subcutaneous tumor was resected surgically 10 days later when it was approximately one cm in diameter. Following surgery, mice were maintained on their respective diets for an additional 10 days. Mice fed the AIN93G diet but not injected with cancer cells served as controls to assess changes in plasma concentrations of cytokines and related biomarkers due to metastasis in LLC-bearing mice fed the AIN93G diet. Mice with recurrence after surgery were excluded from the study.

At termination, mice were intraperitoneally injected with a mixture of ketamine/xylazine. Lungs were harvested and fixed with Bouin’s solution. The number of pulmonary metastases was counted [33] and the cross-sectional area and the volume of each metastasis were analyzed [34] by using a camera-equipped stereomicroscope and ImagePro-Plus software (Media Cybernetics, Silver Spring, MD). The cross-sectional area of a metastasis was defined as the surface area of the lung metastasis. The volume was estimated by assuming that the metastasis was spherical and using its average diameter [34]. The average diameter was the average measured at two degree intervals joining two outline points and passing through the centroid. Plasma was collected and stored at -80°C for quantifying proinflammatory cytokines, angiogenic factors and insulin.

Concentrations of cytokines, angiogenic factors and insulin in plasma

Sandwich enzyme-linked immunosorbent assay (ELISA) kits were used to quantify plasma concentrations of proinflammatory cytokines (leptin, monocyte chemotactic protein-1 (MCP-1) and plasminogen activator inhibitor-1 (PAI-1)), angiogenic factors (vascular endothelial growth factor (VEGF) and tissue inhibitor of metalloproteinase-1 (TIMP-1)) and insulin following manufacturers’ protocols. Leptin, MCP-1, PAI-1, VEGF and TIMP-1 ELISA kits were obtained from R&D Systems (Minneapolis, MN), and the insulin kit was from Mercodia (Winston-Salem, NC). Samples were read within the linear range of the assay, and the accuracy of the analysis was confirmed by the controls provided in each kit.

One-way analysis of variance (ANOVA) and Tukey contrasts were used to compare differences among the groups. Pearson correlation was performed between body weight and body fat mass weight. A mixed model ANOVA with mouse as the random blocking factor was used to compare differences in size of metastases (cross-sectional area and volume) in mice fed different diets. All data are presented as means ± standard error of the mean (SEM). Differences with a p value of 0.05 or less are considered significant. All analyses were performed by using SAS software (version 9.4, SAS Institute, Cary, NC).

Funding for this work was provided by the U.S. Department of Agriculture, Agriculture Research Service, Research Project 3062-51000-050-00D.