We performed a retrospective analysis of 32 metastatic osteosarcoma cases to examine the prognostic value of the plasma D-dimer level. We assessed the D-dimer level before second-line chemotherapy (D1) and the D-dimer level after two cycles of second-line chemotherapy (D2). The change in D-dimer level (ΔD) was defined as D2 minus D1. The overall survival (OS) of patients with a high D1 was significantly shorter than those with a low D1 (median OS, 4.7 vs. 16.2 months, P=0.001). Similar results were observed for the D2 (median OS, 4.7 vs. 8.6 months, P=0.033). Multivariable analysis demonstrated that a high D1 (hazard ratio, 3.375; 95% confidence interval, 1.133–10.053; P=0.029) was an unfavorable independent prognostic factor. The mean D2 of 11 patients with stable disease decreased by 0.69 mg/mL compared to the D1 (P = 0.016). The mean D2 increased by 1.47 mg/mL compared to the D1 in 21 patients with progressive disease (P = 0.004). The data suggest that D-dimer may serve as a prognostic biomarker for metastatic osteosarcoma patients treated with second-line chemotherapy.

Coagulation products have been associated with tumor growth, angiogenesis, and metastasis [8, 9]. D-dimer is a fibrin degradation product, which is produced when cross-linked fibrin is degraded by plasmin-induced fibrinolytic activity. The D-dimer level is widely used as an assessment tool for the diagnosis and treatment of thrombosis [10]. Elevated D-dimer levels were also associated with shorter survival times in patients with malignant tumors such as breast, colorectal, prostate, lung, pancreatic, and ovarian [11-16]. D-dimer is also a biomarker for chemotherapy response in patients with advanced lung, gastric, colorectal cancer, and serous ovarian cancer [17-20]. However, the clinical significance of D-dimer levels in metastatic osteosarcoma is not yet clear.

This study consisted of 32 osteosarcoma patients for whom we had complete clinical data. There were 18 male and 24 female patients. The baseline characteristics of the patients are shown in Table 1. The median age was 16 years. Most of the tumors (90.6%) were located in the extremities. A total of 71.9% of the patients had a Karnofsky Performance Scale (KPS) score ≥80. Four patients had pathological fractures and eight had local recurrence.

Data are presented as percentages.

D-dimer as a prognostic marker of survival 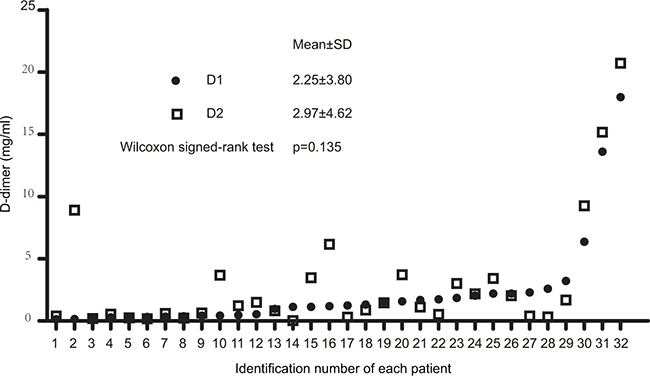 The relationship between D-dimer and second-line chemotherapy response

No differences were observed in the D1 and D2 (P =0.135) (Figure 1). We next evaluated the relationship between ΔD and treatment response. The mean D2 in11 patients with stable disease (SD) decreased by 0.69 mg/mL compared to the D1 (P = 0.016) (Figure 4 and Table 3). The mean D2 increased by 1.47 mg/mL compared to the D1 in 21 patients with progressive disease (PD) (P = 0.004). These results suggested that the D-dimer level may serve as a predictive biomarker for chemotherapy response. 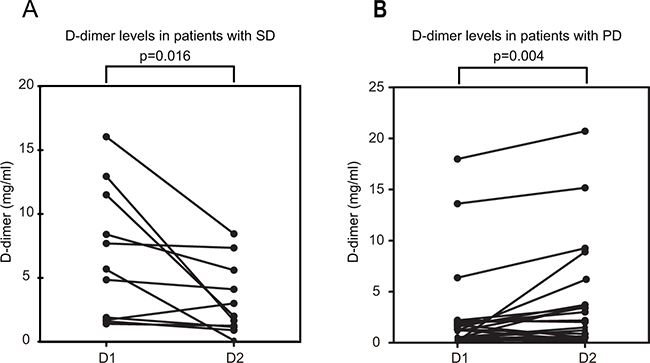 Table 3: Differences in D-dimer levels in patients with PD and SD 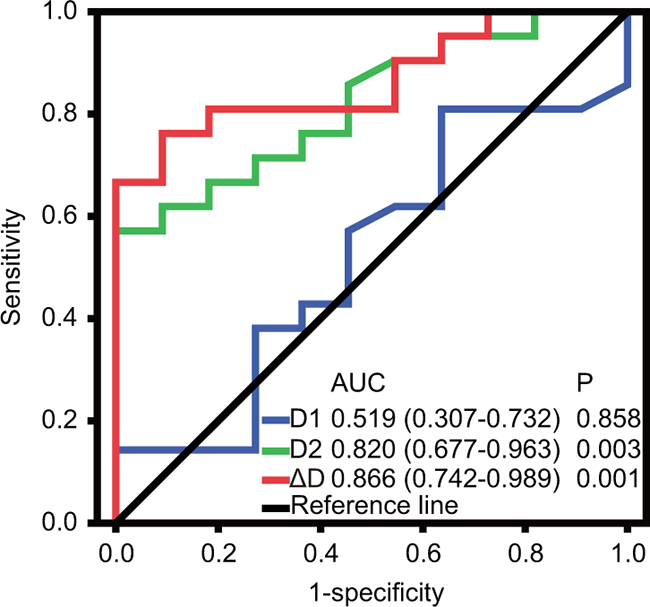 Metastasis involves multiple tumor-host interactions. Cancer cells dissociate from the primary tumor, migrate into the circulation, attach to the vasculature, invade the surrounding tissue, and establish a new blood supply at the metastatic site [19, 21]. Cross-linked fibrin in the extracellular matrix increases the metastatic potential by serving as a stable scaffold for endothelial cell migration during angiogenesis and invasion. It also protects the cells from natural-killer cells [22-24]. Fibrin remodeling plays a crucial role in metastatic progression [25, 26]. Indeed, a reduction in pulmonary micrometastases was observed in fibrinogen-deficient and plasminogen knockout mice compared to wild-type [27-29].

D-dimer is generated by the action of factor XIIIa on fibrin monomers and polymers, and when the endogenous fibrinolytic system degrades cross-linked fibrin [30]. D-dimer consists of two identical subunits derived from two fibrin proteins. It is the final fragment generated by plasmin-mediated degradation of cross-linked fibrin. The D-dimer level is elevated in situations of enhanced fibrin formation and fibrinolysis [31]. Tumor cells can alter the balance between the coagulation, anticoagulation, and fibrinolytic systems through multiple mechanisms. This can result in hypercoagulation [32, 33]. D-dimer levels were significantly higher in cancer patients compared to healthy controls, associated with patient prognosis, and even serving as a biomarker for chemotherapy response [11, 13, 17-20, 34-36].

In this retrospective study, we evaluated whether the D-dimer level was a prognostic biomarker in patients with metastatic osteosarcoma. Our results showed that a high D1 and D2 were associated with an adverse prognosis. Univariable analysis indicated that the KPS, D1, and D2 were associated with OS. Multivariable analysis demonstrated that a high D1 was an independent unfavorable prognostic factor. The mean D2 in 11 patients with SD was significantly lower than the mean D1. In contrast, in 21 patients with PD, the mean D2 was significantly higher than the mean D1. These data indicated that the D-dimer level could be a useful prognostic marker in metastatic osteosarcoma.

We also assessed whether the D1, D2, and ΔD could be used to discriminate between responders and non-responders using ROC curves. The AUC values were 0.519, 0.820, and 0.786 for the D1, D2, and ΔD, respectively. The AUC values for the D2 and ΔD were larger than the values for the D1, which indicated that the D2 and ΔD had a stronger association with tumor response. The D-dimer level was measured close to the start of chemotherapy and the tumor response assessed according to the treatment schedule (Figure 6). Based on our results, D-dimer has diagnostic value. It may also be a predictive factor of tumor response. To test this hypothesis, we will change the timing of the D2 measurement to right after the first cycle of second-line chemotherapy in a prospective study.

Measurement of D-dimer levels is simple and cheap compared to imaging examinations. A new model based on the D-dimer level may be particularly useful for patients in developing countries. However, our study had several limitations. First, it was a retrospective, single-institution study with a small sample size. As a consequence, it provided a lower level of evidence than a randomized controlled trial. Second, we excluded patients for whom there was incomplete clinical data. This could have resulted in selection bias. The cut-off values for the D-dimer levels were also likely biased because they were determined based on ROC analysis. Finally, heterogeneity in the treatment approaches could have affected the results. Chemotherapeutic agents produce coagulation imbalances by causing endothelial injury, decreases in coagulation factors synthesis in the liver, and/or platelet dysfunction [37, 38]. Different second-line chemotherapies could have altered D-dimer levels, which would also have biased our results.

In conclusion, our data indicate pre- and post-chemotherapy D-dimer levels are correlated with OS in patients with metastatic osteosarcoma. Moreover, the D2 is a robust predictor of survival. The D2 and ΔD were strongly associated with tumor response. These results indicate that D-dimer levels could be used to predict prognosis and treatment response in patients with metastatic osteosarcoma. Additional prospective studies are necessary to validate these findings.

We retrospectively reviewed the medical records of 32 patients with osteosarcoma who were treated in our department between January 2006 and June 2015. The inclusion criteria for the primary studies were the following: (i) patients with histologically confirmed osteosarcoma; (ii) patients who received second-line chemotherapy and had available D-dimer measurements pre- and post-chemotherapy. Patients were excluded from the final analysis for the following reasons: (i) acute illness such as infection within the 2 weeks preceding D-dimer measurement; (ii) use of anticoagulants at the start of second-line chemotherapy; (iii) other primary malignancy; and (iv) incomplete data. The study was approved by the Medical Ethics Committee of the Shanghai Jiaotong University Affiliated Sixth People’s Hospital.

All statistical analyses were performed using the SPSS statistical software (Version 19.0, IBM Corp.). D-dimer levels were presented as the mean ± standard deviation and compared using Wilcoxon signed-rank tests. OS was defined as the time from the date of treatment with second-line chemotherapy to the date of the last follow-up or death from any cause. The optimal cut-off values for the D1, D2, and ΔD were determined by ROC analysis using OS as the end-point. Kaplan-Meier analysis was performed to generate survival curves. To identify independent prognostic factors, univariable and multivariable analyses were performed using Cox regression models. The AUC was calculated and compared to evaluate the abilities of the D1, D2, and ΔD in discriminating the response to second-line chemotherapy. P values were two-sided, and a P < 0.05 was considered statistically significant.

The study was supported by grants from the National Natural Science Foundation of China (No. 81001191) and Science and Technology Commission of Shanghai, China (No. 10PJ1408300).