Excessive Ultra-violet (UV) radiation and reactive oxygen species (ROS) are known as the important contributors of age-related macular degeneration (AMD) and other retinal degenerative diseases [1–3]. Retinal pigment epithelium (RPE) dysfunction, along with photoreceptor damages, and Bruch’s membrane thickening, were observed in many AMD patients [1–3]. Our group and others have demonstrated that UV radiation will lead to ROS production and RPE cell oxidative stresses [4–6]. The latter will induce RPE cell apoptosis [4–8].

A recent study by Jo et al., has characterized a novel, selective, and cell-permeable small molecule Akt activator: SC79 [11]. SC79 uniquely suppresses Akt membrane translocation while activating Akt in the cytosol [11]. SC79 has shown cytoprotective effects in experimental settings [11]. For example, SC79 could suppress excitotoxicity and alleviate stroke-induced neuronal death [11]. When given in vivo, it also protected against early brain injuries by subarachnoid hemorrhage [12]. Yet, Moreira et al., showed that activation of Akt by SC79 failed to reduce ischemic injury of the rat heart [13]. In the current study, we investigated its role on UV-induced RPE cell damages. 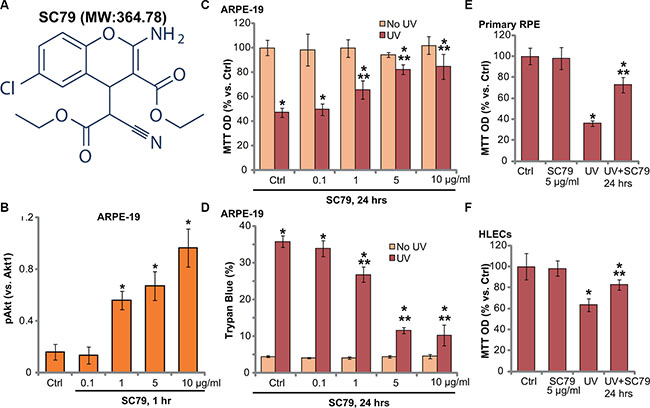 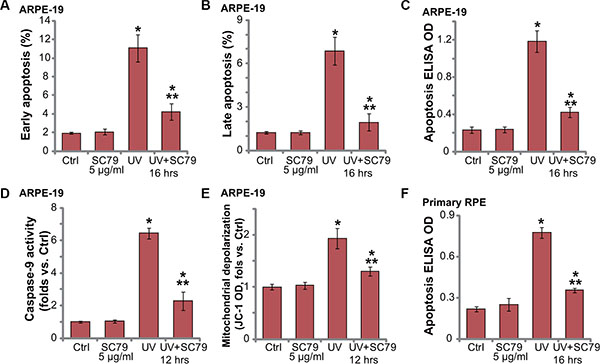 Figure 2: SC79 inhibits UV-induced apoptosis activation in RPE cells. ARPE-19 cells (A–E) or primary murine RPE cells (“Primary RPE”,(F)) were pretreated with SC79 (5 μg/mL) for 30 min prior to UV radiation (30 mJ/cm2), cells were further cultured for applied time, and cell apoptosis was tested by listed assays (A–F). For each assay, n = 5. Experiments in this figure were repeated three times to insure consistency of results. *p < 0.05 vs. “Ctrl” group. **p < 0.05 vs. UV only group. 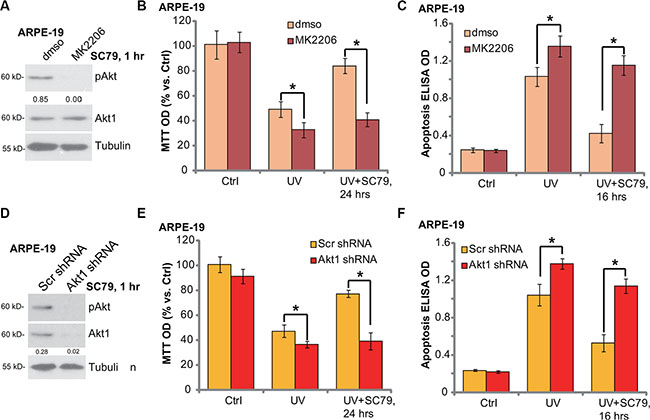 To rule out the possible off-target effect of MK-2206, we utilized targeted shRNA to selectively knockdown Akt1 in ARPE-19 cells (See the same protocol in our previous study [6]). SC79-induced Akt activation was almost blocked in Akt1-silenced cells (Figure 3D). These Akt1-shRNA expressing stable ARPE-19 cells were more vulnerable to UV radiation (Figure 3E and 3F). In line with pharmacological data, SC79 was unable to rescue ARPE-19 cells from UV when Akt1 was silenced (Figure 3E and 3F). Collectively, we suggest that SC79-induced RPE cytoprotection against UV requires Akt activation. 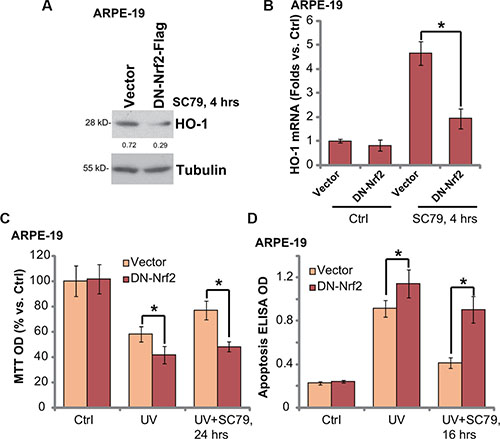 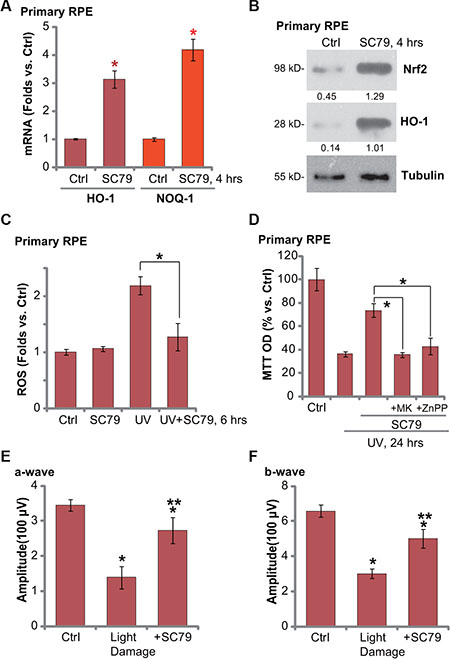 At last, the mouse retinal light damage model [6, 23] was applied to test the activity of SC79 in vivo. In line with our previous findings, twenty-four hours after the light exposure, retinal ERG a- and b-waves were markedly decreased (Figure 6E and 6F) [6]. Significantly, intravitreal injection of SC79 (50 ng/eye) largely attenuated above retinal changes (Figure 6E and 6F). SC79 administration alone failed to affected ERG in our system (Data not shown). These results indicate that SC79 intravitreal injection could protect mouse retina from light damages.

All methods listed in the study were carried out in accordance with the approved ethics guidelines of all authors’ institutions.

Culture of human retinal pigment epithelial cells (ARPE-19 line) and human lens epithelial cells (HLECs) were described previously [6, 27, 28]. The protocols of isolation and culture of primary murine RPE cells were described in our previous studies [6, 10]. The experiments were performed in accordance with the Institutional Animal Care and Use Committee (IACUC). The protocols were approved by all authors’ institutions.

UV radiation (UVB and UVA2) to cultured cells was performed as reported [4–6]. Cells were irradiated at desired intensity (30 mJ/cm2). Afterwards, cells were returned for incubation in culture medium with indicated treatments.

The cell viability was tested via the MTT assay, which was described in detail in our previous publications [10, 29]. The optical density (OD) value (at 590 nm) of group with treatment was expressed as the percentage of that of the untreated control group [10].

The detailed protocol of Western blot assay was described in our previous studies [5, 10, 20]. For data analysis, each band was quantified and normalized to the indicated loading control via the ImageJ software [5]. For the Western blot assay, each lane was loaded with exact same amount of quantified protein lysates (30 μg per sample). Same set of lysate samples were run in sister gels to test different proteins.

As described in our previous study [32], the cell mitochondrial membrane potential (MMP) reduction, an indicator of mitochondrial depolarization, was measured via JC-1 dye (T3168, Invitrogen, Shanghai, China). With the MMP decreasing, monomeric JC-1 will be formed in the cytosol, exhibiting green fluorescence. Following applied treatment, cells were stained with 5 μg/mL of JC-1 for 10 min at 37°C. Afterwards, cells were washed and tested on a microplate reader with an excitation filter of 485 nm and emission filter of 527 nm. Fluorescence intensity was recorded as the indicator of mitochondrial depolarization.

The weight-matched male BALB/c mice (6–8 week old) were utilized. The retinal light damage model was described in detail in our previous studies [6]. Briefly, mice were kept in dark for 24 h. Afterwards, one drop of 0.5% tropicamide and 0.5% phenylephrine hydrochloride were added for pupillary dilation. The mice retina were then exposed to white fluorescent light (5000 lux) [6, 23]. To evaluate the in vivo activity of SC79, 30 min before light exposure, SC79 (at 50 ng/eye, in PBS) was injected intravitreally to the left eyes. For detecting ERG [6, 23], twenty-four h after light exposure, a single light-flash eye stimulus (3000 cd/m2 for 10 ms) was applied [6]. This ERG recording process was conducted under dim red light, and the mice were kept warm during the process. The a-wave and b-wave amplitudes were measured as described [6]. All protocols were approved by the IACUC and Ethical Committee of all authors institutions.

Quantitative results were normalized to the control values of each assay, and were presented as mean ± standard deviation (SD). Data were analyzed by one-way ANOVA followed by a Scheffe’s f-test via SPSS 18.0 software (SPSS Inc., Chicago, IL). Significance was chosen as p < 0.05