Incidence and relative risk of hemorrhagic events associated with ramucirumab in cancer patients: a systematic review and meta-analysis

The purpose of this study was to investigate the overall incidence and relative risk (RR) of hemorrhagic events in cancer patients treated with ramucirumab. 298 potentially relevant citations on ramucirumab from Pubmed, Web of Science and the Cochrane Database, as well as abstracts presented at conferences (all up to March 2016) were identified through our initial search. Only phase II and III prospective clinical trials of ramucirumab among cancer patients with toxicity records on hemorrhagic events were selected for final analysis. Data was extracted from the original studies by two independent reviewers. The overall incidence, RR, and 95% confidence intervals (CI) were calculated using fixed or random effects models according to the heterogeneity of the enrolled studies. The statistical analysis was performed by STATA version 11.0 (Stata Corporation, College Station, TX). 4963 patients with a variety of solid tumors from eleven eligible studies were selected into our analysis. The results demonstrated that the overall incidences of all-grade and high-grade hemorrhagic events in cancer patients were 27.6% (95% CI, 18.7-36.5%) and 2.3% (95% CI, 1.3-3.2%), respectively. The RR of hemorrhagic events of ramucirumab compared to control was significantly increased for low-grade (RR, 2.06; 95% CI, 1.85-2.29, p < 0.001), but not for high-grade (RR, 1.19, 95% CI, 0.80-1.76, p=0.39) hemorrhagic events. Hemorrhagic events associated with ramucirumab are modest and manageable while patients could continue to receive ramucizumab treatment to achieve their maximum clinical benefits.

Ramucirumab (IMC-1121B, ImClone Systems, Bridgewater, NJ, USA) is a fully human IgG1 monoclonal antibody that specifically binds to the VEGFR-2 extracellular domain with high affinity, preventing binding of all VEGF ligands and receptor activation [3]. Results from several phase III clinical trials among multiple tumor types have confirmed the efficacy of ramucirumab [4-8]. The inhibition of the VEGFR-2 receptor by ramucirumab in second-line treatment for advanced gastric cancer (GAC) or gastroesophageal junction adenocarcinoma (GEJC) improved survival when given alone or in combination with paclitaxel [5-6], and for non-small-cell lung cancer (NSCLC) when given in combination with docetaxel [7].

We systematically searched Pubmed, Web of Science and the Cochrane Database (up to March 2016) using various combinations of the terms: (“ramucirumab” or “IMC-1121B” or “LY3009806”), and (“cancer” or “carcinoma” or “tumor” or malignancy” or “neoplasia”) and (“clinical trial” or “prospective trials” or “randomized controlled trial”). Furthermore, the American Society of Clinical Oncology (ASCO) and European Society of Medical Oncology (ESMO) abstracts database of the annual meetings in the past ten years was also searched. The search was performed with restriction to English language, and references in the primary publications were also assessed to find additional studies. When multiple reports describing the same population were published, the most recent or complete one was selected for final analysis. All studies were selected and systemically reviewed in accordance with the Preferred Reporting Items for Systematic Reviews and Meta-Analyses (PRISMA) statement.

The publications and data were reviewed and extracted by two independent investigators (T.R. and Z.F.). The relevant information of each study including: (1) article or publication information, such as first author’s name, year of publication, etc.; (2) patient characteristics, such as diagnosis, age, gender, etc.; (3) study designation information, such as phase, total sample size, sample size per arm; (4) information about treatment, such as treatment approach, dose and cycle of ramucirumab used; (5) hemorrhagic events from the safety and toxicity profile and so on were carefully extracted, and they were recorded to a data collection form and then entered into an electronic database.

Statistical analysis of the overall incidence and RR for hemorrhagic events in cancer patients who received ramucirumab were performed using STATA version 11.0 (Stata Corporation, College Station, TX). We derived the proportion and calculated the 95% confidence interval (CI) of patients with all-grade and high-grade hemorrhagic events from each study. For randomized controlled studies, we also calculated and compared the RRs of low grade and high-grade hemorrhagic events. The χ2-based Q statistic was applied to determine the heterogeneity between selected studies. And the heterogeneity was considered to be statistically significant when Pheterogeneity < 0.10 or I2 > 50%. If heterogeneity existed, data was analyzed using a random-effects model, otherwise, a fixed-effects model was used. RR > 1 indicated more hemorrhagic events in ramucirumab containing treatment arm; and vice versa. We further investigated the differences in incidences and RRs of hemorrhagic events according to different tumor types and ramucirumab dosages. The Funnel plot was used to assess the potential publication bias regarding our primary endpoint (relative risk of hemorrhagic events). A two-sided p value of < 0.05 was considered statistically significant. And all CIs had a two-sided probability and with a coverage of 95%.

A total of 298 potentially relevant studies on ramucirumab were identified through initial database searching. Eleven eligible studies met the inclusion criteria and were selected into the final analysis [4-8,10-15] (Figure 1). Examination of references in the primary publications did not yield any additional studies for evaluation. Review articles, irrelevant topics, non-comparative studies, case reports, and animal experimental studies were excluded.

Table 1: Baseline characteristics of studies included in the meta-analysis. 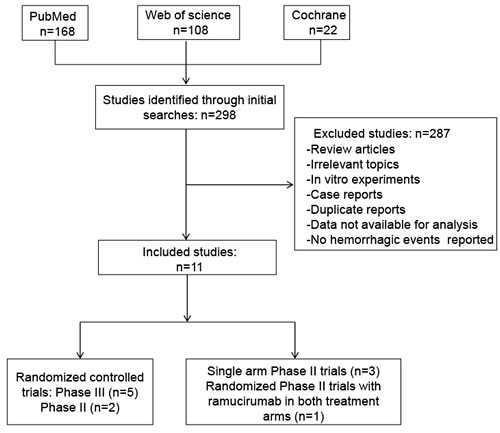 Quality of the studies

The Jadad scores of the included five muticenter, randomized, placebo controlled and double-blinded phase III trials ranged from 3 to 5, while there were two phase II, randomized, open-labeled studies were assigned a Jadad score of 2 and 3, respectively. Therefore, quality of these studies was fair and acceptable. 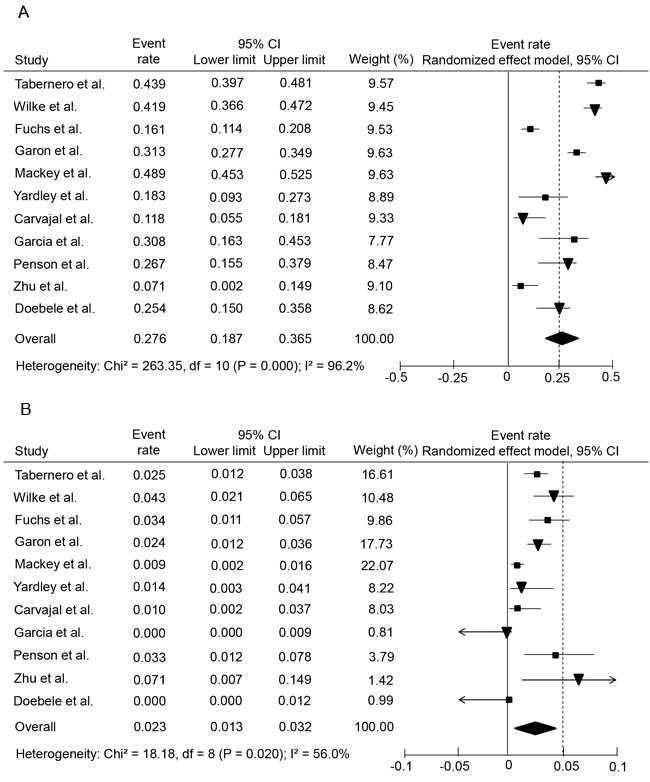 Relative risks of hemorrhagic events according to different tumor types 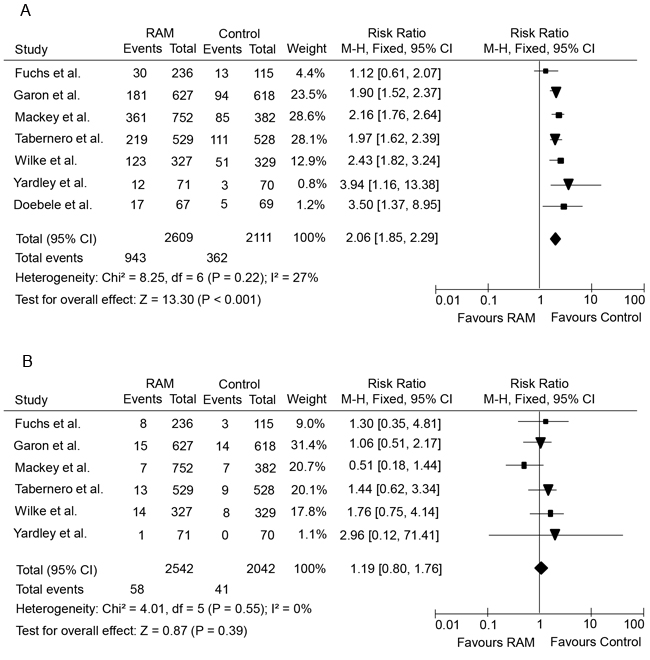 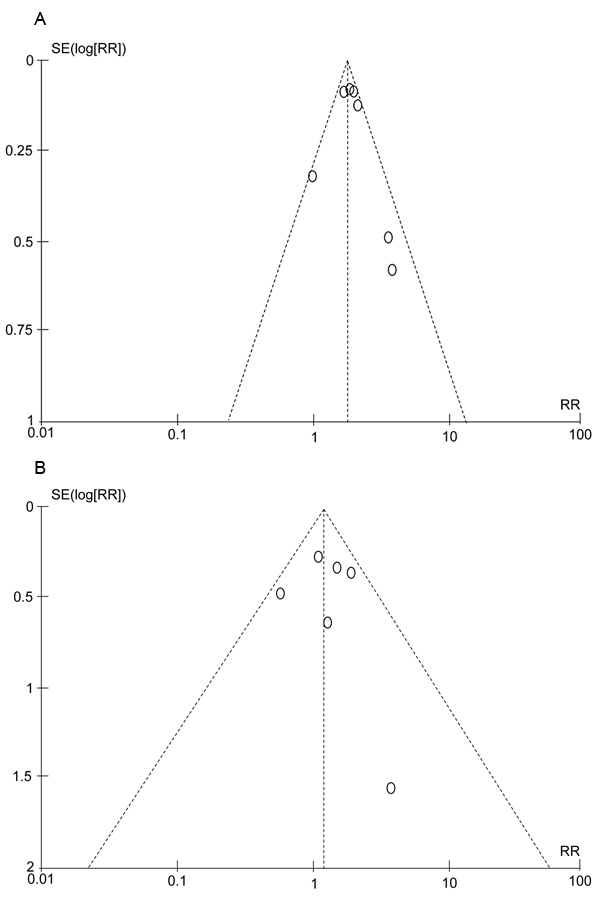 VEGF/VEGFR is extensively involved in vascular endothelial cell proliferation and endothelial cell survival, as well as in maintaining vascular integrity. By blocking VEGF/VEGFR pathway, antiangiogenic inhibitors not only inhibits tumor growth, but also impairs the repair capacity of endothelial cells and causes defects of the plasma membrane or underlying matrix, thus resulting to an increased risk of hemorrhage/bleeding [16]. In addition, life-threatening hemorrhage/bleeding may occur through weakening of the wall of major vessels by tumor erosion, necrosis or other concurrent pathological conditions [17-18]. Similar to other antiangiogenic inhibitors, hemorrhagic events (epistaxis, gastrointestinal hemorrhage/bleeding and pulmonary hemorrhage) is one of the major adverse events in cancer patients who received ramucirumab, and the reported incidences vary substantially among different clinical trials. The aim of this study was to define the overall incidence and relative risk of hemorrhagic events in cancer patients treated with ramucirumab. The present meta-analysis combined 11 publications including seven randomized controlled trials. Our meta-analysis demonstrated that ramucirumab was associated with an increased risk of developing hemorrhagic events, especially grade 1 and 2 hemorrhagic events. The overall incidence of all-grade and high-grade hemorrhagic events was 27.6% (95% CI, 18.7-36.5%) and 2.3% (95% CI, 1.3-3.2%), respectively. And our results from RCTs demonstrated that the relative risk of hemorrhagic events of ramucirumab compared to control was significantly increased for all-grade (RR, 1.97; 95% CI, 1.79-2.18, p < 0.001), but not for high-grade (RR, 1.19, 95% CI, 0.80-1.76, p = 0.36) hemorrhagic events.

Administration of ramucirumab is associated with an increased risk of hemorrhagic events (including severe and sometimes life-threatening bleeding episodes), which is emphasized by a black-box warning in the prescribing information, suggesting monitoring patients for signs and symptoms of severe bleeding. For patients who are with high-grade hemorrhagic events, ramucirumab should not be administered.

The following limitations must be taken into account when interpreting the results of our meta-analysis. The main limitation was that some of the studies included into our analysis were RCTs while the others were not. As a result, the quality of the evidence could not be guaranteed. Besides, due to the inadequate random sequence generation and blinding procedure, it tended to increase the risk of bias of this meta-analysis. In addition, our meta-analysis was based on published results, but not individual patient data. Finally, although no efforts were spared to search the literature comprehensively, there still existed the possibility that few relevant publications were not identified.

In conclusion, our results indicate that the administration of ramucirumab in cancer patients is associated with an increased risk of low-grade, but not high-grade hemorrhagic events, which are modest and manageable while patients could continue to receive ramucizumab treatment to achieve their maximum clinical benefits.

This study was supported by grants from The National Natural Science Foundation of China (NO. 81502323).