According to new statistics offered by the American Cancer Society, lung cancer is the first most common cause of cancer-related death and the most lethal cancer in the United States [1]. In 2015, it is estimated that new cases and deaths from lung cancer in the United States was 221,200 and 158,040, respectively [1]. Adenocarcinoma is the most common type of lung cancer accounting for 40% of all cases with its incidence increasing [2, 3]. Gefitinib is a specific and effective epidermal growth factor receptor tyrosine kinase inhibitors (EGFR-TKIs), and it has been studied and used to treat lung adenocarcinoma patients with activating EGFR mutations, such as exon 19 deletion and exon 21 L858R mutation [4, 5]. However, despite initial dramatic response in patients harboring such EGFR mutations, most patients will eventually develop acquired resistance to EGFR-TKIs [6–8]. Several mechanisms underlying acquired resistance to EGFR-TKIs have been identified, including secondary EGFR T790M mutation, MET amplification and HER2 amplification [9–11]. Elucidation of novel mechanisms underlying the acquired resistance to EGFR-TKIs is important for developing personalized therapeutics to treat patients with lung adenocarcinoma.

As a typical proliferation-associated transcription factor, FOXM1 mainly exerts its function in tumorigenesis through transcriptional regulation of its target genes to initiate various cellular responses, including cell growth, proliferation, differentiation, longevity and transformation [12–14]. It belongs to a large family of evolutionary conserved transcription factors that were characterized by a conserved DNA binding domain called Forkhead or winged-helix domain [14–16]. FOXM1 is frequently overexpressed in many human cancers, and its expression is associated with poor cancer outcomes [14, 17–23]. Previous studies have shown that FOXM1 is broadly involved in drug resistance [23–28]. Furthermore, several studies indicates that FoxM1 plays an important role in the resistance of cancer cells to gefitinib [29–32]. However, the molecular mechanisms underlying cancer cells resistance to gefitinib are still not fully understood.

Approximately 20–25% of EGFR-TKI resistance arises due to the amplification of MET, a gene that encodes a receptor tyrosine kinase for hepatocyte growth factor [33, 34]. The MET signaling pathway has been implicated in the development and progression of various cancers including lung cancer, but the mechanisms regulating its expression are not fully understood [35]. The MET amplification results in continuous activation of the phosphoinosmde-3-kinase (PI3K)/AKT signaling pathway, which is the major downstream signaling routes of EGFR [35]. Like the MET signaling pathway, which is also aberrantly activated in lung cancer, the PI3K/AKT pathway is strongly activated and plays a very important role in lung cancer development as well as EGFR-TKI resistance [36]. Moreover, the function of FOXM1 was reported to be mediated by PI3K/AKT signaling pathway [21, 37–39]. These findings suggest that MET/AKT/FOXM1 signaling pathway may play an important role in the resistance of lung adenocarcinoma cells to gefitinib. 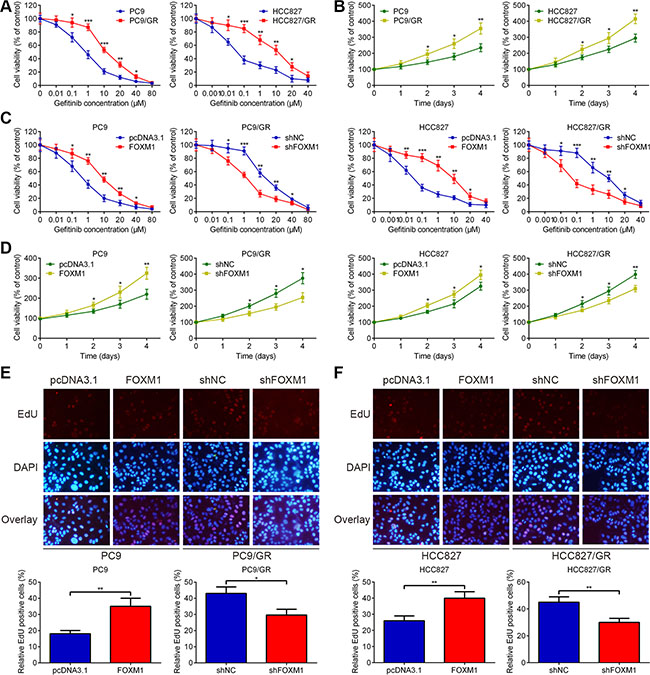 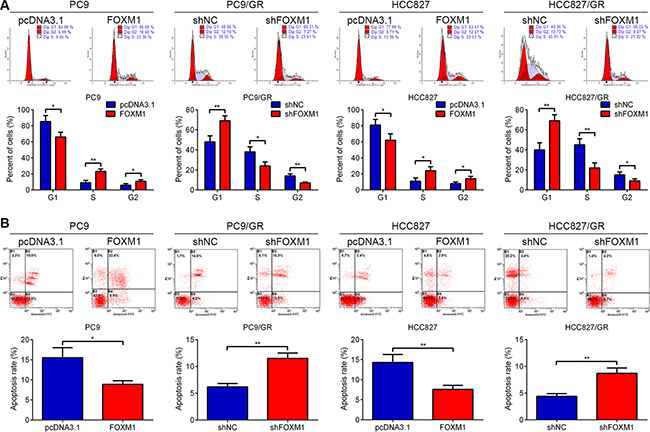 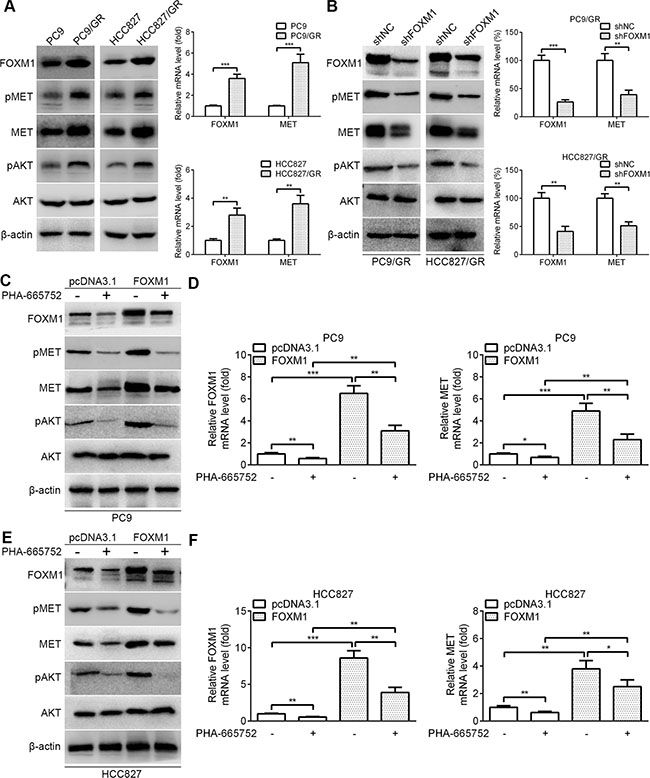 FOXM1 is a transcriptional activator of MET 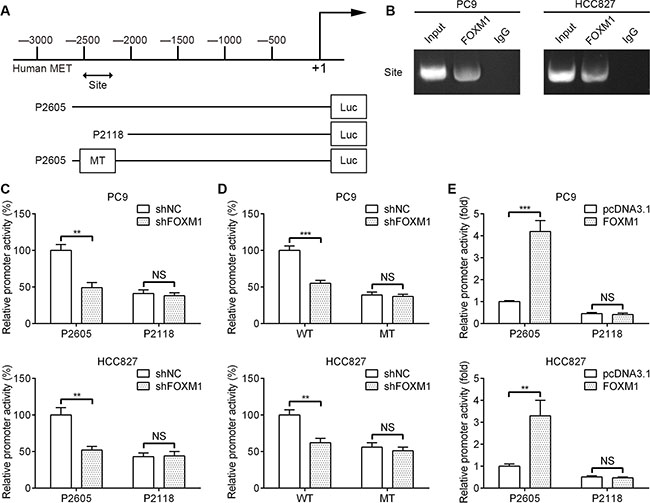 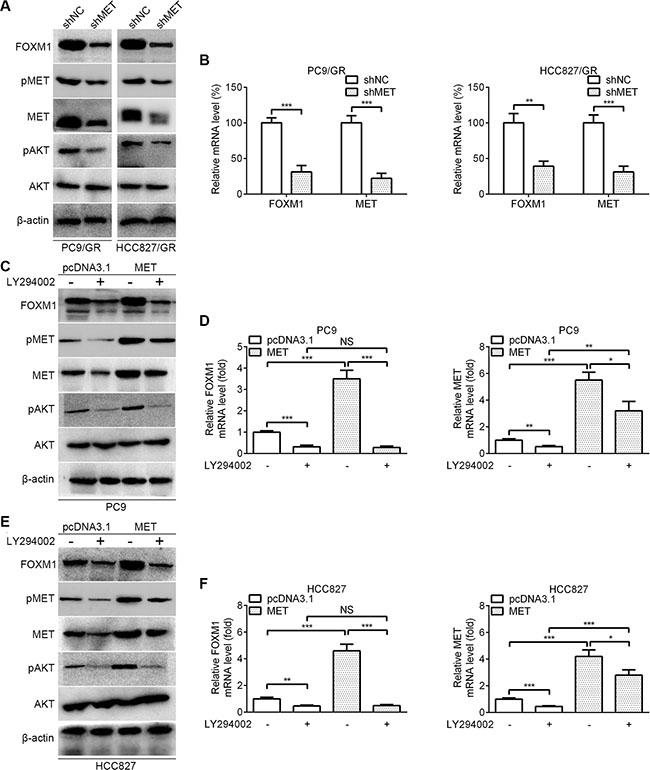 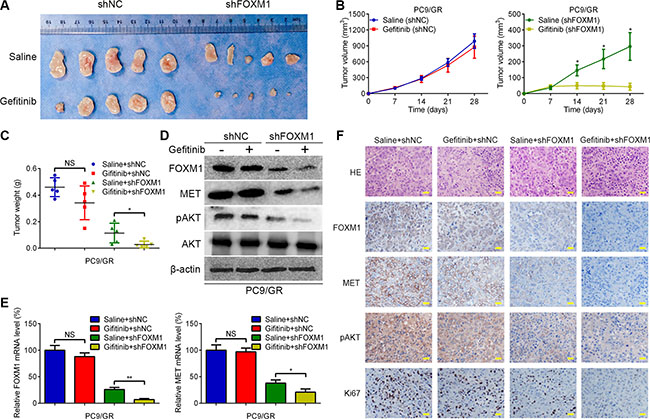 Figure 6: FOXM1 knockdown enhances gefitinib sensitivity in vivo. (A) Representative pictures of xenograft tumors are shown. (B) The tumor volumes were measured at the indicated time points. (C) Tumor weight derived from FOXM1-shRNA knockdown or control-shRNA knockdown was measured at day 28. (D–F) The expression levels of FOXM1, MET and pAKT were analyzed by qRT–PCR, western blotting and immunohistochemistry. Data are represented as means ± SD of each group. *P < 0.05, **P < 0.01, NS, nonsignificant, Student’s t-test. 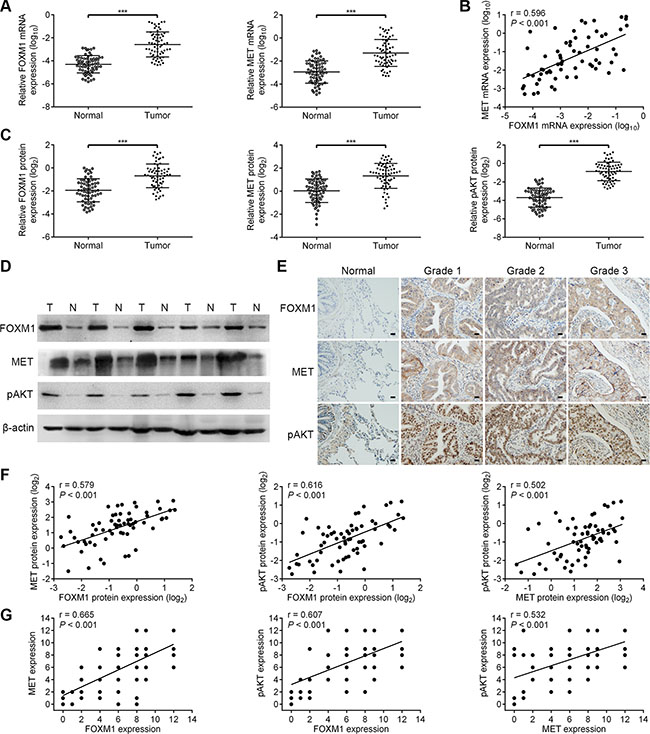 FOXM1 is well-known for its critical role in cell cycle progression by regulating the transition from G1 to S phase and G2 to M phase progression, as well as to mitosis [14]. Besides its essential roles in cell cycle regulation, FOXM1 also emerged as an oncogenic transcription factor with a high expression and functional impact in many types of cancer cells [14, 17–23]. Furthermore, previous studies indicate that FOXM1 induces chemotherapy resistance in various cancer cells by protecting cancer cell proliferation and abrogating apoptosis [23–28]. Gefitinib, a selective and effective EGFR tyrosine kinase inhibitor, significantly inhibits EGFR autophosphorylation and subsequent downstream signaling pathway through AKT, and induces G1 cell cycle arrest [40]. Previous studies have confirmed that FOXM1 was a downstream cellular target of EGFR signaling and had an important role in cancer development [41, 42]. Therefore, we hypothesized that FOXM1 might be involved in gefitinib resistance of lung adenocarcinoma cells. Here we showed that FOXM1 overexpression promoted PC9 and HCC827 cell resistance to gefitinib treatment, whereas FOXM1 knockdown increased gefitinib sensitivity of PC9/GR and HCC827/GR cells. We also showed that FOXM1 overexpression attenuated PC9 and HCC827 cell apoptosis and G1 arrest effects of gefitinib, whereas FOXM1 knockdown promoted PC9/GR and HCC827/GR cell apoptosis and G1 arrest effects of gefitinib. In consistent with our findings, it was also reported that FOXM1 had an important role in the resistance of cancer cells to gefitinib [29–32]. However, the molecular mechanisms underlying FOXM1-mediated gefitinib resistance in lung adenocarcinoma cells remains to be elucidated.

To better understand the molecular mechanism by which FOXM1 contributes to gefitinib resistance in lung adenocarcinoma cells, we searched for the potential targets of FOXM1. MET is known to play an important role in lung cancer development as well as gefitinib resistance [33, 34]. Met activation in tumor cells can occur through several molecular mechanisms, such as overexpression, structural alterations, and HGF-dependent or HGF-independent activation [35]. We observed no significant difference in HGF expression between PC9 and PC9/GR cells, and between HCC827 and HCC827/GR cells. However, it has not been fully understood whether and how MET amplification caused by other mechanisms can affect sensitivity to gefitinib. We further investigated whether FOXM1, an oncogenic transcription factor, regulated MET expression via transcription in lung adenocarcinoma cells. The results of the present study showed that FOXM1 bound directly to the MET promoter regions to promote its transcription.

This study was approved by the Ethics Committee of the Fourth Military Medical University. A total of 64 pairs of lung adenocarcinoma specimens and adjacent non-cancerous specimens were collected from patients who had underwent resection at Tangdu Hospital Affiliated with the Fourth Military Medical University, with written informed consent of patients. A part of each tissue was immediately snap-frozen in liquid nitrogen while the other part was fixed in formalin for histological examination. None of the patients underwent chemotherapy or other adjuvant treatments before surgery.

The PC9 and HCC827 cell lines, which were derived from patients with pulmonary adenocarcinoma carrying an in-frame deletion in EGFR exon 19 (E746-A750 deletion), show strong sensitivity to gefitinib. The PC9 cells and HCC827 cells were obtained from Sigma-Aldrich Corporation (St. Louis, MO) and American Type Culture Collection (ATCC), respectively. The gefitinib-resistant PC9 cell line (PC9/GR) and HCC827 cell line (HCC827/GR) were established by following the protocol described in a previous study [44]. All cells were cultured in RPMI 1640 with 10% fetal bovine serum (Gibco BRL, Gaithersburg, MD), 100 U/mL penicillin (Invitrogen, Carlsbad, CA), and 100 mg/mL streptomycin, and were incubated at 37°C in 5% CO2 humidified air. Gefitinib was obtained from AstraZeneca and dissolved in DMSO at various concentrations and quantities, per the experimental design. The specific PI3K/AKT inhibitor LY294002 was purchased from Cell Signaling Technology and was used at a final concentration of 10 μM. The specific MET inhibitor PHA-665752 was purchased from Selleck Chemicals (Houston, TX) and was used at a final concentration of 0.1 μM.

The pcDNA3.1-FOXM1 (FOXM1) and pcDNA3.1-MET (MET) plasmids were constructed in our laboratory. The shRNA for FOXM1 (shFOXM1), MET(shMET) and negative control shRNA (shNC) were obtained from Santa Cruz Biotechnology (Dallas, TX). Transfections were performed with Lipofectamine 2000 reagent (Invitrogen, Carlsbad, CA) using 1–2 mg of expression vector/ml serum-free medium as described by the manufacturer.

Cell survival was measured by 3-(4, 5-dimethylthiazol-2-yl)-2, 5-diphenyltetrazolium bromide (MTT) assay. Untransfected or transfected cells were re-seeded into 96-well plates and incubated at 37°C in humidified 5% CO2 for 48 hrs. Serially diluted gefitinib was added, and the cells were incubated for an additional 72 hrs. The absorbance at 490 nm (A490) of each well was measured on a spectrophotometer. Three independent experiments were performed in quadruplicate.

To measure cell proliferation, an EdU (5-ethynyl- 2′-deoxyuridine) proliferation assay was performed as described previously [45]. The cells were plated in 24-well plates at a density of 5 × 104 cells/well, then treated with 0.1 μM gefitinib for 72 hrs. Cells were washed with PBS, then incubated in serum-free DMEM containing 10 μmol/L EdU (RiboBio, Guangzhou, China) for 2 hrs. Cells were fixed, then underwent Apollo staining and DNA staining, according to the manufacturer’s instructions to detect the number of cycling cells during the EdU treatment. The cells were imaged using fluorescence microscopy, and the number of proliferating cells was averaged to calculate the labeling index.

Chromatin immunoprecipitation (ChIP) assays were performed in lung adenocarcinoma cells following the protocol provided by the manufacturer (Millipore, Bedford, MA). Briefly, after cross-linking with formaldehyde at 1% final concentration for 10 min at 37°C and the reaction was quenched by addition of glycine to a final concentration of 0.125 M. The cells were lysed in SDS buffer and the pellet was resuspended in nuclei lysis buffer and sonicated. Immunoprecipitation was carried out with FOXM1 antibody (Santa Cruz Biotechnology, Dallas, TX). The PCR primer sequences for DNA fragments as parts of the targeted promoters are provided in Supplementary Table S2.

BALB/C nude mice aged 4–6 weeks old were purchased from Shanghai Laboratory Animal Center (SLAC, Shanghai, China) and housed within a dedicated SPF facility at the Laboratory Animal Center of the Fourth Military Medical University. All studies were performed following guidelines approved by the Institutional Animal Ethics Committee of the Fourth Military Medical University. For tumor growth evaluation, PC9/GR cells (5 × 106) were stably transfected with shNC or shFOXM1 and subcutaneously injected into the left flank of nude mice. Xenograft size was measured daily and tumor volume was determined as (length × width2)/2. After one week, mice were subjected to oral treatment with saline or gefitinib (20 mg/kg) every day. The mice were humanely killed on day 28, and subcutaneous tumors were surgically excised, weighed and photographed. Immunohistochemistry, western blotting and qRT–PCR were performed for Ki67, FOXM1, pAKT and MET.

All data were expressed as mean ± standard deviation (S.D.), and then processed using GraphPad Prism v5.0 software. Data were analyzed using the Student t-test. Pearson correlation coefficient was used to measure the strength of the association between FOXM1, pAKT and MET expression levels. Statistical significance was accepted at P value less than 0.05.