Background: The expression levels and clinical significances of Lysosomal-associated protein transmembrane-4β-35 (LAPTM4B-35) protein are unknown in the non-small-cell lung cancer (NSCLC). This study aimed to explore the expression and prognostic value of LAPTM4B-35 in NSCLC patients. Methods: The clinicopathological and survival data of 107 NSCLC patients who received radical surgery from 2007 and 2011 were reviewed. The LAPTM4B-35 expression of the paired tumors and adjacent normal specimens were detected, and the association between LAPTM4B-35 and clinical variables was explored. Kaplan-Meier analysis and Cox regression (Proportional hazard model) were performed to investigate the prognostic significance for NSCLC. Results: LAPTM4B-35 was over expressed in NSCLC tissues. The elevated LAPTM4B-35 expression was associated with cancer recurrence (P = 0.031). The 5-year median OS and PFS were significantly worse in the LAPTM4B-35 overexpressed group. Multivariate Cox analysis showed that LAPTM4B-35 over-expression was an independent factor for OS and PFS in NSCLC(P = 0.018, P = 0.026, respectively). Conclusions: The overexpressed LAPTM4B-35 was an independent prognostic biomarker for NSCLC, which could predict cancer recurrence and poor over survival. And that may be applied as potential target for NSCLC treatment.

Lung cancer was the most important cause of tumor-related death, though the incidence began declining in the last decades [1-3]. As a subgroup of lung cancer, about 85% of all cases were the Non-small cell lung cancer (NSCLC) [4]. Despite advances in the diagnosis and treatment for the NSCLC, the 5-year survival rates for advanced NSCLC remains poor (less than 15%) [5, 6]. Compared to clinical characteristics, more novel and prognostic biomarkers that could predict the tumor recurrence and prognosis is still urgent to be identified to improve the prognosis of NSCLC [7].

Lysosome-associated protein transmembrane-4 beta (LAPTM4B) was first identified from hepatocellular carcinoma (HCC), and the LAPTM4B-35 overexpression was associated with poor prognosis of HCC [8]. And the similar results were also confirmed in various malignant tumors, such as pancreatic cancer [9], ovarian cancer [10], gallbladder carcinoma [11], and cervical cancer [12]. Recently, one study reported that LAPTM4B was elevated in Small cell lung cancer (SCLC) and its overexpression was an independent factor in SCLC prognosis [13]. However, the expression level and the association between LAPTM4B-35 and survival in NSCLC have not been rigorously and systematically evaluated.

In the current study, we investigated the LAPTM4B-35 expression levels and its association with clinical variables; also we further explored and discussed the prognostic value of LAPTM4B-35 in NSCLC. Our data showed that LAPTM4B-35 overexpression might be used as an predictor for NSCLC.

Table 1 summarized the clinicopathological characteristics of all the NSLCL patients. Among these patients, the median age in this study was 65 years (range, 28 to 81 years), and 85 (79.4%) patients were male and 22(20.6%) patients were female. 34(31.8%) patients were SCC and 73(68.2%) were non-SCC. 48 lymph node negative patients received postoperative adjuvant chemotherapy alone, while 55 lymph node metastasis patients had chemo-radiotherapy treatment.

The mRNA level of LAPTM4B-35 was detected by qRT-PCR, and as the Figure 1A indicated, the LAPTM4B-35 mRNA was overexpressed in tumor tissues. Consistently, our Western Blotting data showed the LAPTM4B-35 protein expression was also significantly elevated in cancer tissues (Figure 1B).

Figure 1: The LAPTM4B-35 expression in NSCLC. A. LAPTM4B-35 mRNA expressions in NSCLC tissues and adjacent normal tissues. The results of the real-time qRT-PCR were analyzed by using the 2-ΔΔCtmethod. B. The relative protein expression. 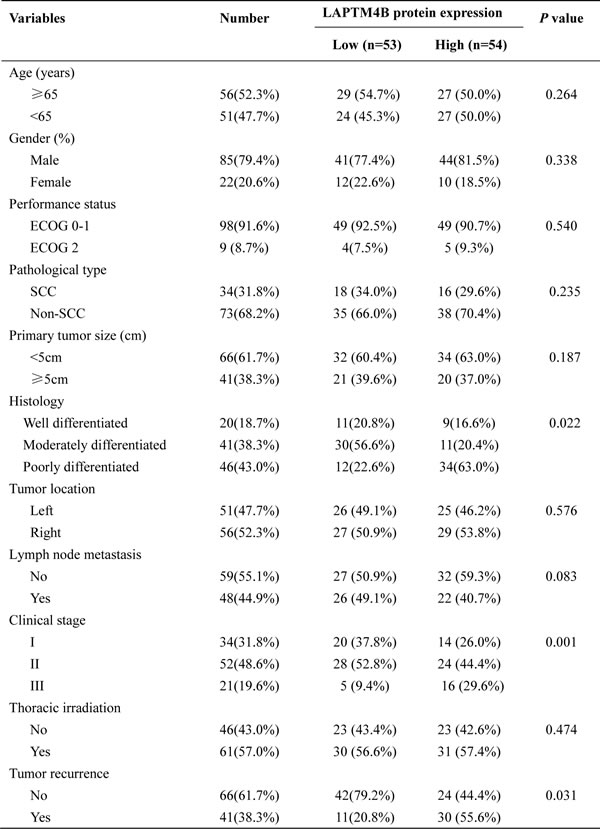 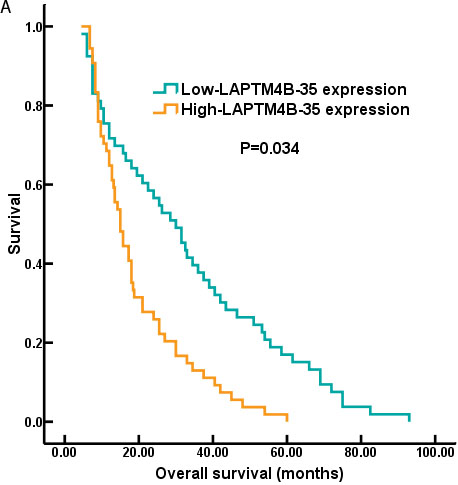 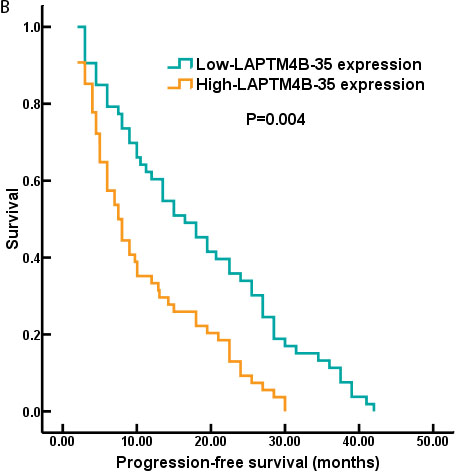 Lung cancer remained the most common cause of cancer related death worldwide. There are about 200,000 new lung cancer patients will be diagnosed in the new year [1]. NSCLC accounted for about 85% of all lung carcinomas, and it included non-SCC and SCC [6, 16]. Systematic clinical studies and basic research on NSCLC had improved the prognosis of the NSCLC, however, the long-term outcome of the NSCLC remained poor [17-20]. It is significant to identify the new biomarkers to improve the prognosis of NSCLC.

The potential limitations including: the relative small size population limited the degree of evidence. Accordingly, larger and muti-center clinical study needs to be conducted to validate our report. Besides, our results and the previous studies all found the LAPTM4B-35 was associated with tumorigenesis, progression and aggressive clinicopathological features, and the potential molecular mechanisms for these processes need to be elucidate.

Our study identified that the LAPTM4B-35 was elevated in NSCLC, the elevated LAPTM4B-35 expression was associated with aggressive clinicopathological features and poor prognosis, suggesting that LAPTM4B-35 protein could be applied in predicting patient’s prognosis.

Patients who were confirmed NSCLC histologically from 2007 to 2011 were enrolled in this study. The inclusion criteria included: (a) received radical surgery; (b) had the complete clinical and follow-up informations. The exclusion criteria included: (a) distant metastasis was found before or during the operation; (b) patients who received treatment prior to radical surgery. Base on the above criteria, total of 107 patients were enrolled in this study. Written informed consents were obtained from all participants according to the Helsinki Declaration, and this study protocol was approved by the Ethics Committee of our hospital, Tianjin, China.

The clinical information such as age, gender, tumor size, histology, TNM stage, clinical stage and survival data were collected. The follow-up data was obtained from outpatient visit or telephone follow-up. The OS was defined as time from the day of diagnosis to the day of last visit or death. The median follow-up time was 64.5 months.

LAPTM4B-35: forward 5’- GCCCGGAGCGATGAAGATG-3’, reverse 5’-CAACAGTACCACAGCATTGATGA-3’; D-glyceraldehyde-3-phosphate dehydrogenase (GAPDH): forward 5’-CCATCAATGACCCCTTCATTG-3’,reverse: 5’-GACGGTGCCATGGAATTT-3’. The cycling program was: denaturation at 95oC for 30 seconds, followed by 38 cycles of denaturing at 95oC for 5 seconds, annealing at 65oC for 30 seconds. The results of qRT-PCR were analyzed by using the 2-ΔΔCtmethod. GAPDH was used as an internal control.

Western blotting was conducted as previously described [14, 15]. In brief, tumor tissues were lysed with NP40 lysis buffer. Equal amounts of proteins were separated by SDS-PAGE, then the proteins were transferred to polyvinylidene fluoride (PVDF) membranes, blocked with 5% nonfat milk, and incubated with GAPDH and anti-LAPTM4B-35 polyclonal antibody (dilution, 1µg/ml; Abcam, Cambridge, UK.) at 4oC overnight, and then probed with secondary antibody at room temperature for 1 hour. Signals were detected using enhanced chemiluminescence detection system (Pierce, Rockford, IL, USA). The intensity of hybridization signals was quantified using Image analysis program. The protein levels were normalized to those of GAPDH. The LAPTM4B-35 protein levels were divided into two groups based on the median expression level.

We thank Jeniffer L for critical reading and corrections on the article.

All authors have no potential conflicts of interest.