Peripheral T-cell lymphoma (PTCL) is a group of diseases with poor outcome and few therapeutic options. We aimed to assess the efficacy of bendamustine in real life cohort of patients.

Between November 2009 and March 2015, 138 PTCL patients were treated with bendamustine in 27 centers. Population median age was 64 (28-89) years with male/female ratio of 1.4. There were mainly angio-immunoblastic (AITL = 71), PTCL-not otherwise specified (PTCL-NOS = 40) and anaplastic large cell lymphoma (ALCL = 8). The majority of patients (96%) had disseminated disease and extranodal localizations (77%). Median number of chemotherapy lines prior to bendamustine was 2 (1-8). Median duration of response (DoR) after the last chemotherapy prior to bendamustine was 4.3 months (1-70) and 50% of patients had refractory disease.

Bendamustine as single agent could be considered as a therapeutic option for relapsed or refractory PTCL, particularly in chemosensitive or AITL patients. Combinations of bendamustine with other drugs warrant further evaluation.

Peripheral T cell lymphoma (PTCL) is a heterogeneous group of diseases, representing 10-15% of lymphoma. Most PTCL have aggressive forms with poor prognosis [1-3]. Histologic subtypes influences outcome with the best prognosis is attributed to ALK- positive anaplastic-large cell lymphoma (ALCL) [4-7]. The International Prognostic Index (IPI) may be helpful in prognosticating subtypes of PTCL especially ALCL, whereas the Prognosis Index for T-cell lymphoma (PIT) is better discriminant for PTCL-NOS [4, 8]. In the absence of more effective chemotherapy, CHOP (cyclophosphamide-anthracycline-vincristine-prednisone) regimen is the most frequent chemotherapy used in front line. Complete response (CR) rate is about 50% and 5-year overall survival (OS) is 37% [9-13]. Autologous stem cell transplantation (ASCT) as consolidation treatment in first-line showed 5-years OS and progression-free survival (PFS) of 51% and 44%, respectively [14]. Recent results of intensive chemotherapy with upfront autologous stem cell transplantation (ASCT) in eligible patients is promising [15, 16]. Refractory disease or relapses are very frequent, concerning about 70% of patients with no standardized salvage therapy [17, 18]. Cytarabine-based salvage regimens showed an ORR of 63% with CR of 27% and grade 3-4 toxicities between 47 and 61% of cases [19, 20]. Gemcitabine, a nucleoside analog, has shown efficacy as monotherapy, in small cohort of patients, with an ORR of 55% or in combination regimens with oxaliplatin with 30% of CR, but uncommon long-term duration of response (DoR) [21]. In a recently published series describing the population-based experience of the British Columbia Cancer Agency in 153 refractory or relapsed PTCL patients, Mak et al. have reported a median OS and PFS of 5.5 and 3.1 months respectively, with no statistically significant difference in outcome after relapse between each of the PTCL subtypes [22]. Pralatrexate, an antifolate, and romidepsin, a histone deacytelase (HDAC) inhibitor, were approved by the Food and Drug Administration for relapsed or refractory PTCL. The ORR and CR rates were 29 and 13% for pralatrexate and 25 and 15% for romidepsin. The median DoR is, however, short with only small subset of patients with long term duration of response under continuous therapy [23, 24]. Brentuximab vedotin, showed, an ORR of 86% in ALCL [25] and 41% in other PTCL subtypes with a CR rate of 24% [26]. Consolidation with ASCT or allogeneic stem cell transplantation (HSCT) in relapse setting for fit patients is the standard of care. However, 2/3rd of patients could not receive transplantation due to disease progression [18, 22, 27, 28].

Bendamustine, a bifunctionnal molecule with alkylating activity and antimetabolites properties has been shown to be effective in a large panel of hematological malignancies [29, 30]. In a recently reported phase II study, 60 patients with PTCL were treated for 6 cycles of 120mg/m2 infusions of bendamustine with an ORR of 50% and complete response (CR) rates of 28% [31]. The DoR was 3.5 months with more than one third of patients with a DoR longer than 6 months. Median OS and PFS were 6.2 and 3.6 months, respectively. In a retrospective Italian cohort of 20 PTCL patients, bendamustine demonstrated an ORR of 55%, CR of 10% and 6 months estimated PFS and OS of 44% and 57%, respectively [32]. However, the precise place of bendamustine use among all PTCL treatment strategies is still unclear [33, 34].

In order to assess the efficacy of bendamustine outside clinical trials, we conducted a national retrospective study of patients with the diagnosis of PTCL and who were treated with bendamustine.

The median number of prior lines of chemotherapy was 2 (range 1-8) (Table 1). The most frequent prior chemotherapy used was CHOP/CHOP-like regimens in 122 patients (88.4%) and cytarabine-based regimens in 53 (38.4%) patients. Only 16 patients had autologous stem cells transplantation (ASCT = 11%) and 7 (5%) patients had allogeneic SCT prior to bendamustine. The median DoR of chemo-sensitive patients after the last chemotherapy was 4.3 months (1-70). Sixty-nine (50%) patients had refractory disease when bendamustine treatment was initiated. Median time from diagnosis to bendamustine first infusion was 12.1 months (range 1.5-108.1). Of note, there were no significant difference for main patients’ characteristics such as age, disease stage, number of previous line and disease status at bendamustine between AITL and PTCL-NOS patients at study entry (data not shown). 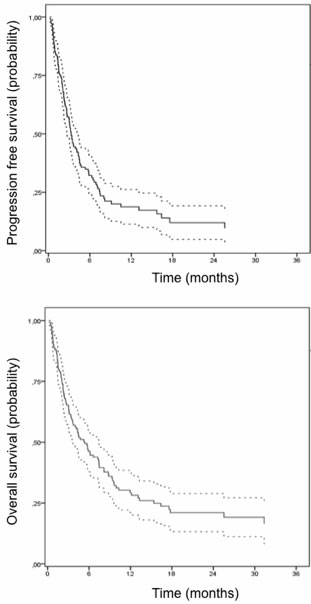 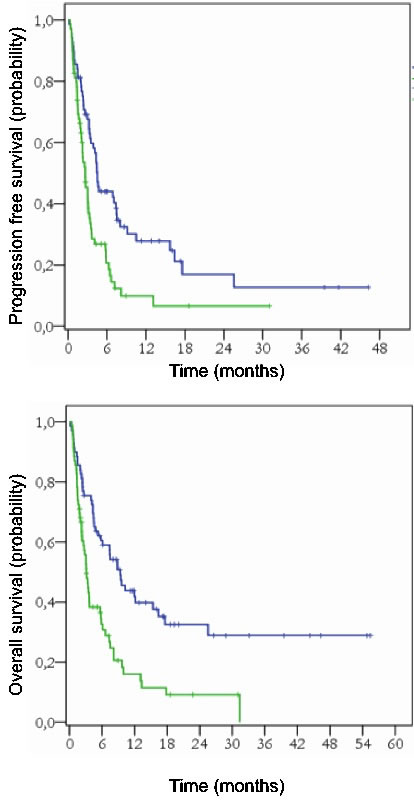 This retrospective study confirms the efficacy of bendamustine in a large cohort of PTCL patients treated outside clinical trials with a CR rate of 24.6%. These results are concordant with the two prior studies, the prospective BENTLY trial [31] and the retrospective Italian study [32]. However, the ORR (32.6%) and PR rate (7.2%) rate are lower in this cohort than in the prospective BENTLY study (ORR = 50%; PR = 26%). In this study, patients were more intensely treated before bendamustine with an increased number of patients with more than 2 lines of previous chemotherapy, lower dose (90 mg/m²) and less cycles of bendamustine than in the BENTLY study. The low percentage of partial responders as compared to the previous studies is difficult to explain. However, we could hypothesize that lower stringent criteria were applied to stop the treatment in this cohort of highly aggressive disease than in a prospective study. We emphasize that one third of patients in PR after 3 cycles converted their response to CR at 6 cycles, which may indicate an advantage to pursue the treatment if any response is reached.

Patients’ other characteristics in this cohort are similar to those reported in the two previous ones regarding age, sex ratio and disease stage. However, the high frequency of AITL in the current cohort is in keeping with the recent report of the high prevalence of AITL in France [35].

This study can be helpful to predict patients who are more likely to respond to bendamustine. Patients with AITL were more sensitive to this drug than patients with other pathological subtypes (univariate analyses) as has been suggested previously [31]. We found a good prognosis impact of having chemosensitive disease status without extranodal localization on response and outcome. We showed also an improved outcome if patients had lower than 3 prior therapies lines or IPI lower than 3 (multivariate analysis).

Bendamustine is effective and safe, even in elderly patients, older than 75 years. ORR and CR rates were not different from those of younger patients. This efficacy and the toxicity profiles of the drug could suggest its preferential use in this group of patients aged more than 70 years old. Furthermore, it could be used as a bridge to transplant in younger patients.

In conclusion, bendamustine may represent an alternative therapy for relapsed or refractory PTCL patients in real-life settings and could be considered as a salvage strategy. These results could be helpful to select patients who will be more likely to respond to bendamustine. Having chemosensitive disease at relapse after being treated with less than 3 lines of chemotherapy are predictive factors for response. The DoR is unfortunately short as with other multiple single agent treatment suggesting the need for evaluating combination drugs in prospective trials.

Hematological French centers were asked to report retrospectively the results of the use of bendamustine in refractory or relapsed PTCL patients. Patients aged 18 years old or more with the diagnosis of PTCL were included. Primary cutaneous T_cell lymphoma with a stage less than IIB [36], Sezary syndrome, the leukemic forms according to the WHO classification [3] and patients who received bendamustine in the BENTLY trial [31] were excluded from the analysis. Patients’ demographics and clinical characteristics, histologic subtypes, prior therapies, disease status, bendamustine dosage and schedule were reported. Pathological review through Lymphopath was available for 80 (58%) patients [35]. Responses were evaluated according to the International Working group criteria (IWGC) [37] and International Society for Cutaneous Lymphomas/European Organization for Research and Treatment of Cancer (ISCL/EORTC) revision classification [36]. Toxicities were assessed according to the adverse events recording using the National Cancer Institute’s Common terminology Criteria for Adverse Events (NCI CTCAE) version 4. PFS and OS distribution were calculated using Kaplan-Meier estimates. Patients who underwent allogeneic stem cell transplant after bendamustine treatment were excluded from the analyses of the DoR, OS and PFS. PTCL-NOS and AITL comparison was assessed by Chi-2 or Fisher’s exact tests for qualitative variable and Mann-Whitney test for quantitative variable. Predictive variables for ORR were determined by using uni- and multivariate logistic regression. Results were expressed as odds ratios and confidence intervals (95CI). For OS and PFS, we used the Cox proportional hazards models with a stepwise backward variable selection approach (p≤0.20) for multivariate analysis and to obtain hazard ratios with confidence intervals. All reported p values were two-sided, and the significance limit was set at 5%.

The authors thank all the participants who helped to collect data: Catherine Ollivier and Alexandra Hebert (CHU Caen).